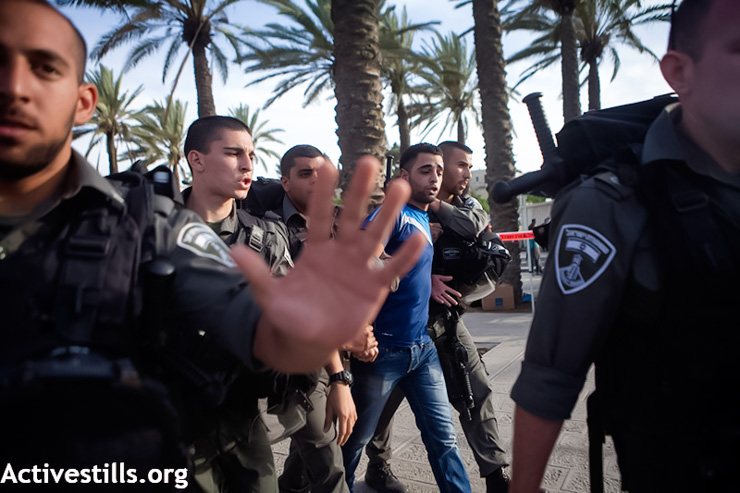 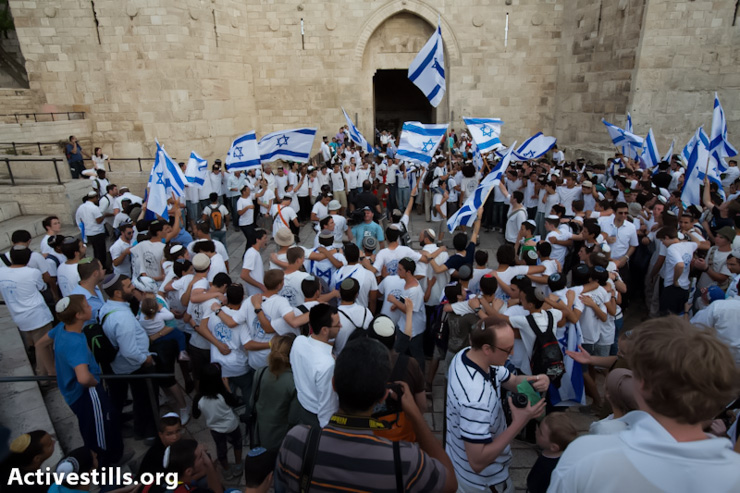 Israeli settlers march into the Old City of Jerusalem during the ‘Jerusalem Day’ march, East Jerusalem, May 8, 2013. Earlier that day, police forces ordered Palestinian shops and stands inside the Old City to close at 15:00. In previous years, Israeli settlers had vandalized and destroyed many Palestinian shops that remained open during the march. (Photo by: Yotam Ronen/Activestills.org) 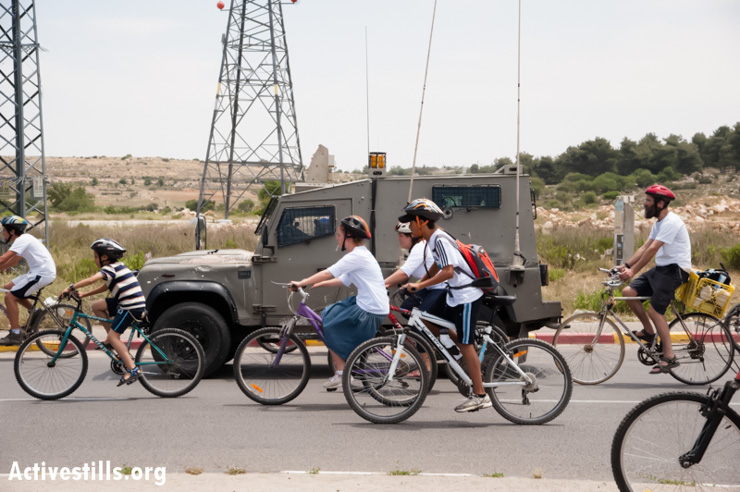 Escorted by military vehicles, Israeli settlers take over the entire northbound lane of Route 60, the main north-south route connecting the West Bank to Jerusalem, during a ‘Jerusalem Day’ event, May 8, 2013. (Photo by: Ryan Rodrick Beiler/Activestills.org) 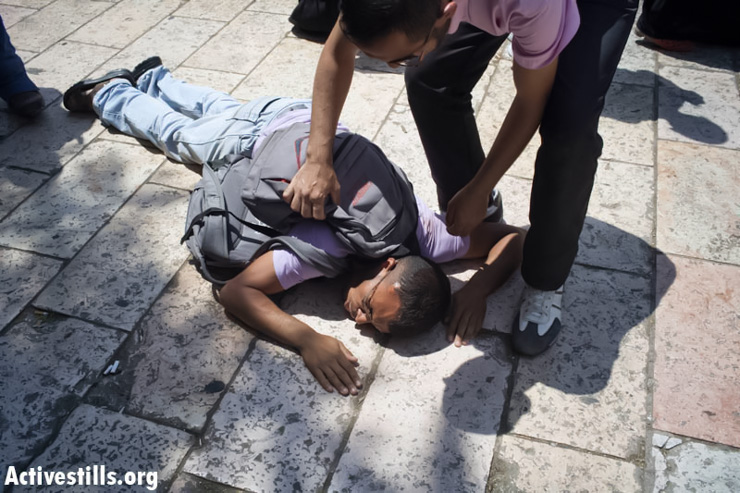 A Palestinian man lies on the ground after Israeli policemen used pepper spray on people gathering at one of the entrances to the Al-Aqsa Mosque compound on May 7, 2013, the Old City, East Jerusalem. (Photo by guest photographer: Tali Mayer/Activestills.org) 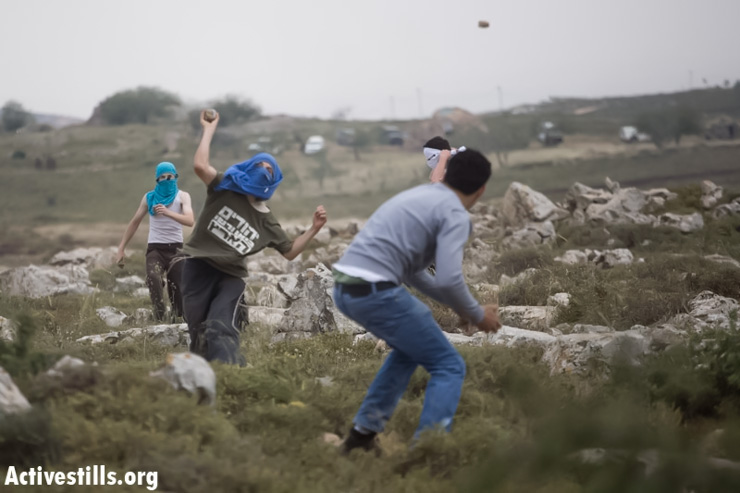 Israeli settlers and Palestinian demonstrators throw stones at each other, after settlers marched onto the lands of the West Bank villages of Deir Jarir and Silwad where villages were protesting the construction on their land by members of the nearby Israeli settlement of Ofra, May 3, 2013. (Photo: Oren Ziv/ Activestills.org) 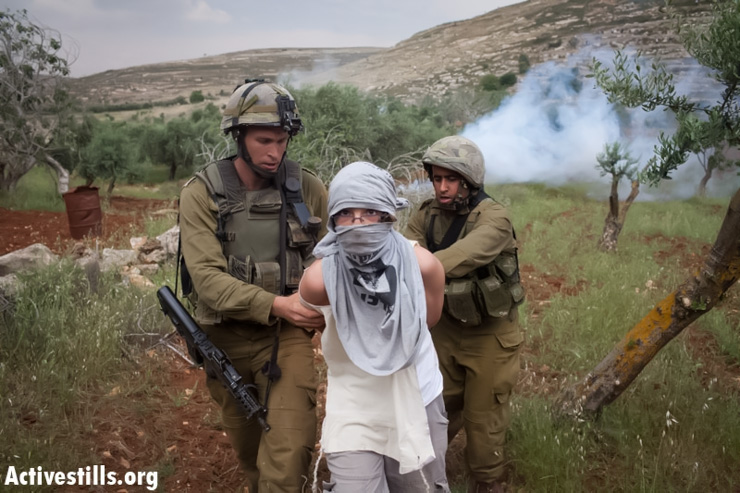 Israeli soldiers arrest an Israeli settler after he threw stones at Palestinian demonstrators from the West Bank villages of Deir Jarir and Silwad during a protest against construction on their land by members of the nearby Jewish settlement of Ofra on May 3, 2013. After two hours of clashes, border policemen arrested just the one settler and let all the others escape. (Photo: Oren Ziv/ Activestills.org) 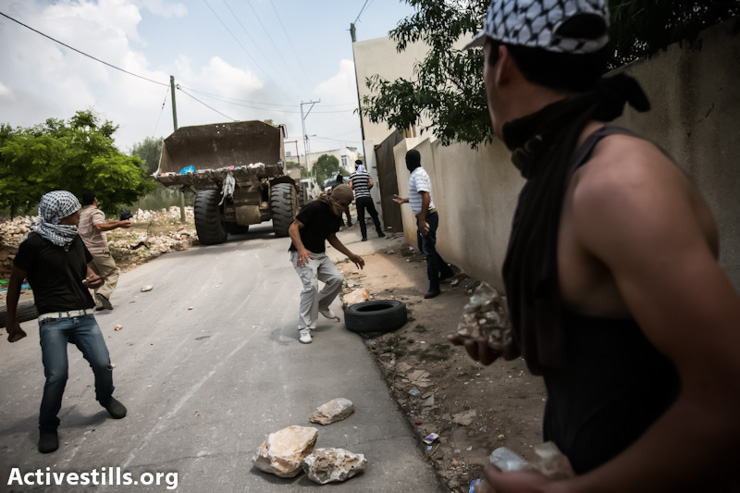 Palestinian youths throws stones at an Israeli army bulldozer during the weekly demonstration in Kfer Qaddum, a West Bank village located east of Qalqiliya,on May 3, 2013. There have been regular demonstrations in Kfer Qaddum since July 2011, protesting the blocking of the main road east of the village which used to link it to Nablus. (Photo by: Yotam Ronen/Activestills.org) 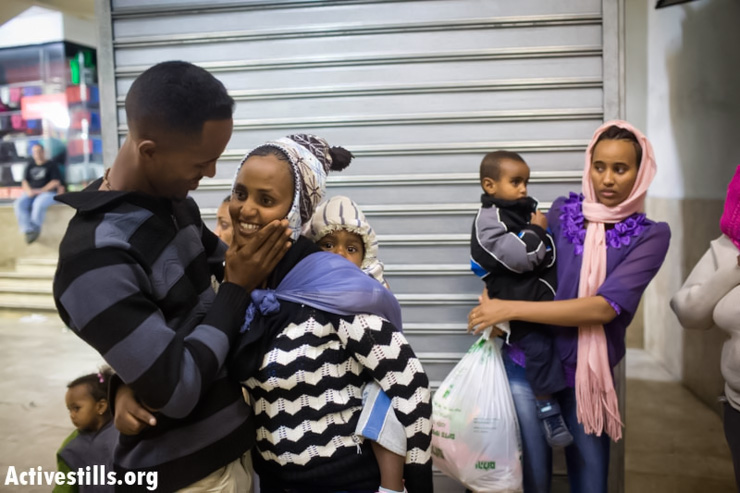 An Eritrean immigrant hugs his wife and children, as they arrive to the central bus station in Tel Aviv on May 6, 2013, after they were released from Saharonim Prison. Nine Eritrean women and their children arrived after a local NGO received a court decision criticizing the prolonged arrest of children in a prison with no adequate conditions for them. The families, who were held for almost a year in Israeli prison, are one of the few groups who were released since the new “Infiltration Law” was approved in January 2012. According to the law, every person who crosses the border illegally into Israel can be held in prison for three years, without a trial. Three of the husbands of the released women are still in prison. (Photo by: Oren Ziv/ Activestills.org) 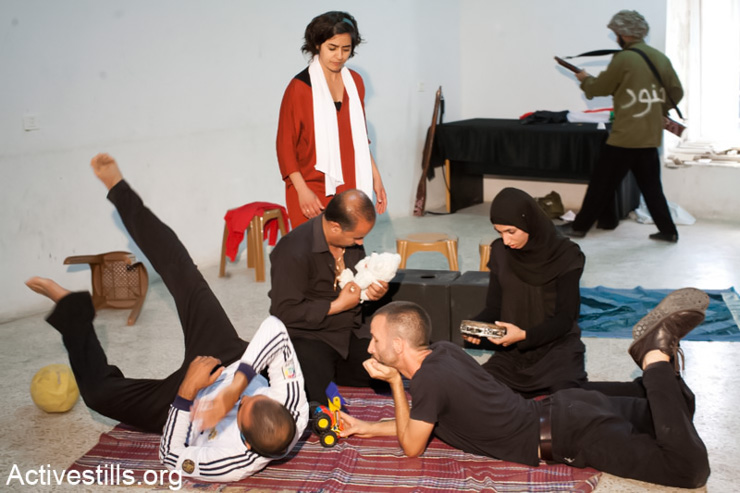 Members of “The Freedom Theater” preform a play based on the story of Nabi Saleh in the cultural center of the village. May 4, 2013. (Photo by: Keren Manor/Activestills.org) 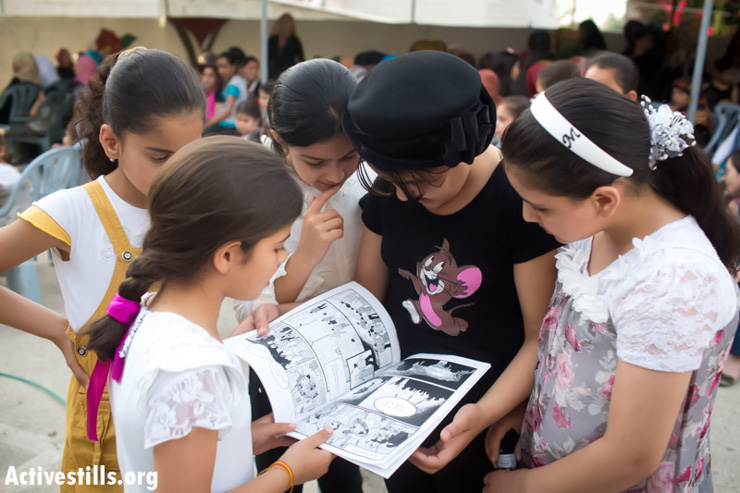 Palestinian children look at a new graphic novel depicting the popular struggle in the West Bank village of Budrus during a publication event for the book, which took place at the girls school in the village, May 2, 2013. The Israeli army later shot tear gas close the where the event was being held, forcing the organizers to end the event earlier then planned. (Photo by: Oren Ziv/Activestills.org) Activists shout slogans near a McDonalds restaurant in Tel Aviv during a ‘critical mass’ bicycling group event, protesting for animal liberation and against the the meat, dairy, and egg industries. May 2, 2013. (Photo by: Keren Manor/Activestills.org) 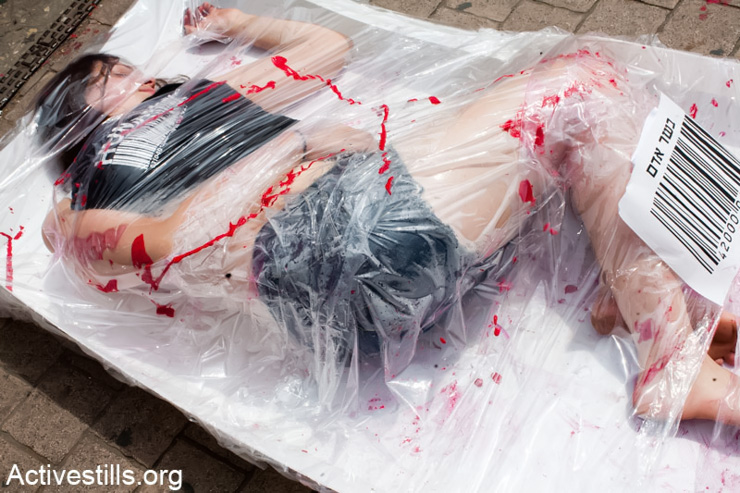 Animal rights activist wrapped in plastic packaging with a sticker reading: “Human flesh”, during a protest organized by the 269life group. The group were demonstrating for animal rights and against the arrest last week of 11 activists from the group, Tel Aviv, Israel, May 3, 2013. (Photo by: Keren Manor/Activestills.org) 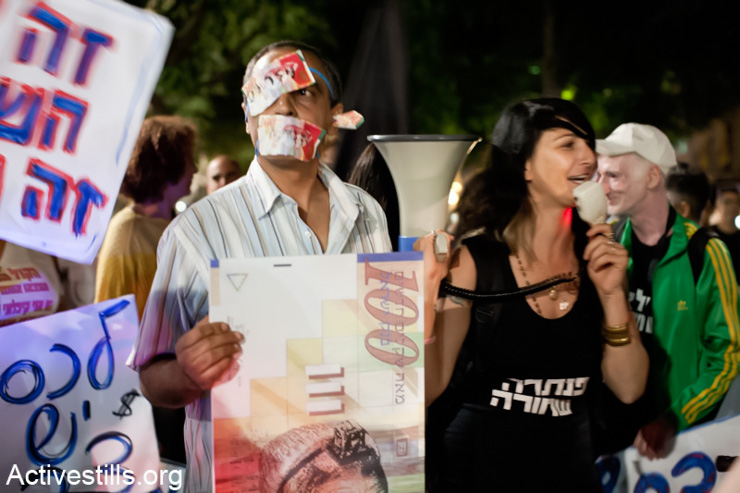 A demonstration against the decision of the Bank of Israel to distribute new bank notes which only commemorate prominent Ashkenazi (European Jewish) poets. When asked why Mizrahi writers were excluded, the committee claimed that they did not know of any renowned Mizrahi poets. The protesters called for an end to discrimination against the Mizrahi population in Israel. Tel Aviv, Israel, May 2, 2013. (Photo by: Keren Manor/Activestills.org) 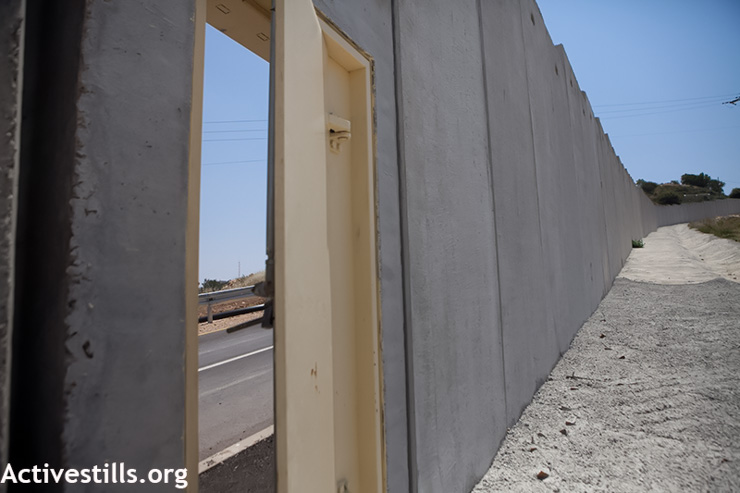 An open door in the Separation Wall in the West Bank village of Al Walaja, May 7, 2013. Once completed, the wall will completely surround Al Walaja village. (Photo by: Anne Paq/Activestills.org)