I can’t help but wonder – is there a connection between the Wisconsin protests and the victory in Tahrir Square? 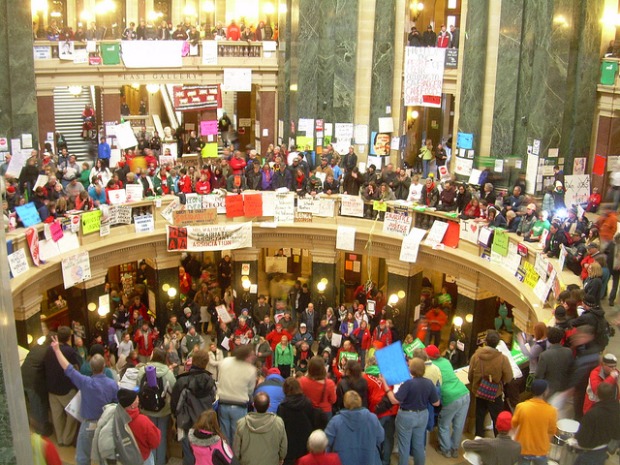 It seems that no matter where you look these days, people are starting to stand for their rights. Here in the Mideast, the region is changing right before our eyes, at a pace that none of us could ever have dreamed.

The past week has also seen some of the largest protests in America since the Vietnam war, and they’re taking place in Madison, Wisconsin. The middle and working class of the state are standing by the unions and have sent a clear message to their Republican governor, Scott Walker, that they won’t have any of his union-busting policies turn into law.

The people weren’t fooled. Walker claims his policies are an attempt to deal with Wisconsin’s financial crisis – which is indeed severe – but the people knew there was something else behind it. They agreed to his economic demands for the sake of the state, but when it came to eliminating their right to bargain collectively – that’s where they drew the line.

And that’s when the people of Wisconsin took the streets and to their state capitol. Because it wasn’t only about money. It was about democracy. It was about keeping hold of the one last weapon against the armies of lobbyists, think tanks and greedy politicians. As Paul Krugman writes:

“You don’t have to love unions, you don’t have to believe that their policy positions are always right, to recognize that they’re among the few influential players in our political system representing the interests of middle- and working-class Americans, as opposed to the wealthy. Indeed, if America has become more oligarchic and less democratic over the last 30 years — which it has — that’s to an important extent due to the decline of private-sector unions.”

Paul Ryan, Republican congressman from Wisconsin, said last week that “it’s like Cairo has moved to Madison”. Not that I’ve ever agreed with a Republican – but there might be more to what Ryan said than meets the eye.

I wonder what made people come out in such big numbers, which they haven’t done lately in America. I know this is a real long shot, and many might think I’m exaggerating: But would it be so far-fetched to think that people in Wisconsin – glued to their TVs watching the fall of dictators, watching the power of the people in action – were inspired by those events? Maybe even subconsciously?

Could it be that people around the world – not only the Mideast – are looking at the region and saying: “We can do this, too”?

Here’s to the Egyptians, the Tunisians, the Yemeni and others. And here’s to the Libyans – who are being mowed down by a violent, blood thirsty lunatic as I write these words.

And here’s to the brave citizens of Wisconsin, standing firm against big money!