When I arrived in Israel, 25 years ago this week, it was the first time I realized I was ‘Russian.’ I had only been a Jew and a Soviet citizen, or so I thought. 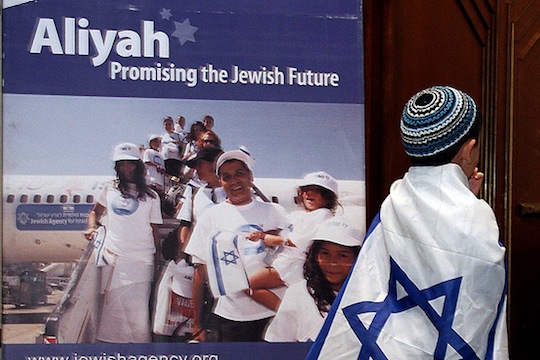 Aliya is a lifelong journey, and this week I’m marking 25 years since mine started.

On August 8, 1991, the movers came. I was still in bed, and my mother woke me up gently. The people who bought our furniture came to collect the beds. We spent our final night on stacks of old blankets provided by friends and neighbors. Our house was empty, except three suitcases and my drawings, still hanging on the wall next to where my bed once stood.

Surprisingly, I wasn’t exceptionally distraught to see my childhood home being taken apart by strangers. In fact, I wasn’t distraught at all. I sat down listening to the foreign songs I taped on my Walkman, which I got as a birthday present only two weeks earlier. I wasn’t thinking about the future.

About Israel, the place we were leaving our country for never to return, I knew close to nothing. When we left Moscow, I was more curious than anxious. I wanted to know if you could get MTV and skateboards in Israel but nobody could answer my question. None of my mother’s friends who were also preparing to make their aliya had ever been to Israel, and their heated discussions about what it would be like were strictly theoretical.

I had said goodbye to my school friends three months before. My grandmother banned me from telling them where we were going, “to be on the safe side.” She had survived the Holocaust, in which her family perished, and Stalin’s purges. But I believed her that telling a bunch of indifferent 14 year-olds that I’m going to Israel was dangerous.
When I was six, she told me I was Jewish, and then too asked me to keep that information for myself. There was nothing I could say, knowing she had lost her family together with most of the other Jews of Rostov.

There wasn’t much to tell, though. She stopped speaking Yiddish after the war. She never celebrated the Jewish festivals. That was her way of getting back at God. To my mind, the term “Jewish” was almost as abstract as the word “abstract” itself. How are Jews different from others? Why do people hate them (well, us) so much all over the world? And why did my family started getting anti-Semitic hate mail in 1990? I had read a few Sholem Aleichem novels, but never made the connection with my family’s customs.

What is Israel anyway? A small strip of land next to Egypt. I could barely spot it on the map in the fat Soviet encyclopedia. I knew a lot about the ancient history of Egypt, because I was very interested in the ancient history of the world, especially Egypt and Sumer. But what about Israel? My knowledge was a mix of bits from Lion Feuchtwanger’s Josephus and the booklet Unknown Israel, featuring pictures of the Netanya boardwalk, that the Jewish Agency distributed. 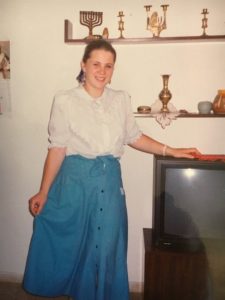 Ksenia Svetlova shortly after her arrival in Israel.

Because of that booklet we almost ended up in Netanya. If my mother wasn’t adamant about living in Jerusalem – because she knew it was the capital, the most important city for the Jewish people and the seat of the Hebrew University, where she wanted me to go – it would probably be Netanya. When we landed at Ben-Gurion airport, a gracious Immigration Absorption Ministry clerk suggested we settle in Dimona. “It has wonderful services for new immigrants,” she said, but my mother insisted on Jerusalem even though we had no friends or family there.

On August 9, 1991, my grandmother, mother and I boarded a train to Budapest. There were no direct flights to Israel at the time. It was a beautiful, warm summer day, filled with the soft, white blossom of the poplar trees. Only when the train started moving, slowly pulling out of Kiyevskaya station, it hit me. I left my childhood behind, for good.
As we waved goodbye to the group of people who accompanied us, my father included, I started to weep. It was probably the second time in my life that I cried. Mom and Grandma were with me, but I felt as lonely as can be. I couldn’t fathom the prospect of not seeing the poplar trees, the Moscow University building (that stood opposite my window), the railway station that had been recently filled with Polish, Indian and Chinese food stalls, ever again.

In the beginning I thought the train was standing still and the platform was moving backwards, but then the train accelerated, the sun set and we sped into the darkness. We spent two nights on the train, and another four nights at a Jewish Agency facility in Budapest. And all that time, I didn’t think about the school I will go to in Israel, or the people I’ll meet, because I simply could not picture that country in my mind. I hadn’t the slightest clue what it looked like.

The day after our arrival, when I was woken by cheeky sunbeams that penetrated the dark curtains in our Jerusalem hotel room, I looked outside and observed the view. I recognized it immediately: It was the awe-inspiring and striking Jerusalem landscape that the great Russian novelist Mikhail Bulgakov depicted in his book The Master and Margarita. Barely any trees, rocky yellow-brown soil, hills, a merciless sun poised in the center of a clear, crisp sky. Jerusalem.

I was searching for Josephus and the Roman soldiers, to no avail, of course. Two weeks later I studied Torah, Talmud and Jewish philosophy in my religious girls’ school. Thanks to that school, my landing was as soft as they come. I was rarely homesick, I made friends quickly and did extremely well at school. Reading Devorah Baron’s and S.Y. Agnon’s stories felt like pulling teeth at first, but that was sorted out pretty quickly too.

I got over the initial shock of how acceptable it was to sit on the ground, and that wherever I went people asked me whether I was Russian. I was never Russian before, I was Jewish and Soviet. Only in Israel I became Russian. It was infuriating at first, and then I learned to either ignore the question or answer laconically.

I learned to love Jerusalem’s chilliness, its white buildings, its hilly landscape, the warmth our neighbors embraced us with as my grandmother Victoria died at the end of my first school year. She, who had lost her religion after the Holocaust, is now buried on the Mount of Olives. Redemption comes in the most mysterious ways.

I raise my two daughters and support my family here in Israel. Whenever anyone asks me what I am, I say “Israeli” with pride.

Even after all these years, loneliness sometimes creeps in, uninvited, at the most unexpected moments and dissipates into the humidity of the summer. But this journey that started a quarter of a century ago still continues day by day, minute by minute.

Ksenia Svetlova is a Member of Knesset for the Zionist Union. This article was first published in Hebrew on Local Call. Read it here.