Some Palestinian prisoners are released while solidarity continues for those on hunger strike, demonstrations target the separation wall, settlements, and school closures, and life goes on amid Gaza’s rubble. 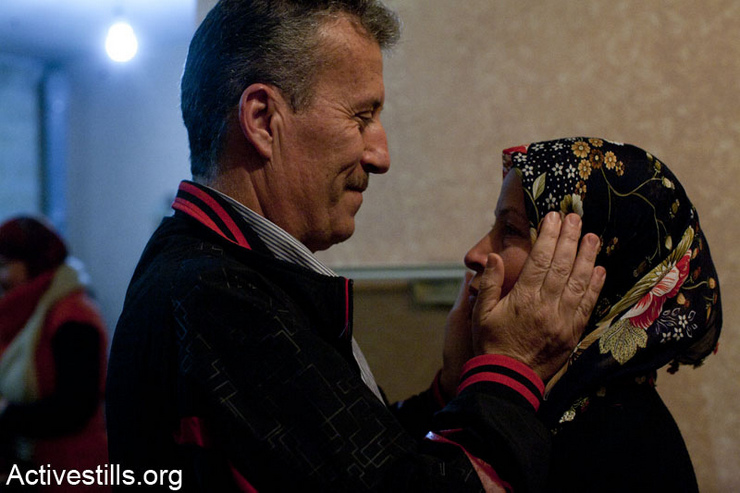 Released political prisoner Bassem Tamimi hugs his wife Neriman during his welcoming party at his home in Nabi Saleh, after spending three months in an Israeli jail, February 10, 2013. Tamimi was arrested during an action calling for the boycott of settlement products inside an Israeli supermarket located in the West Bank settlement of Geva Binyamin. (Photo by: Keren Manor/ Activestills.org) 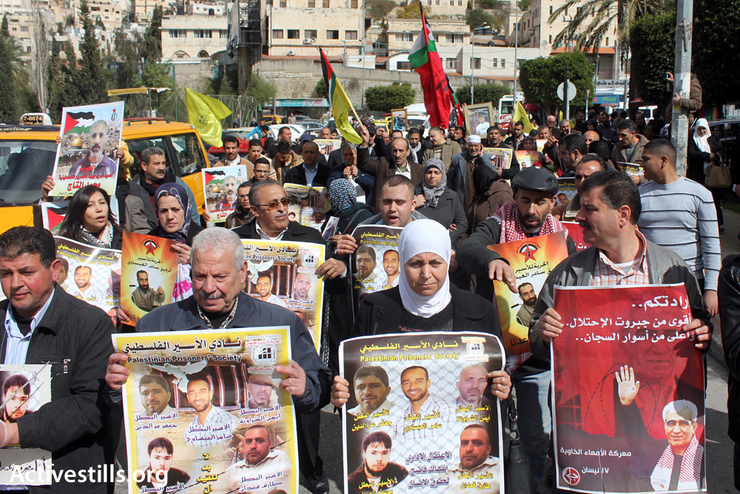 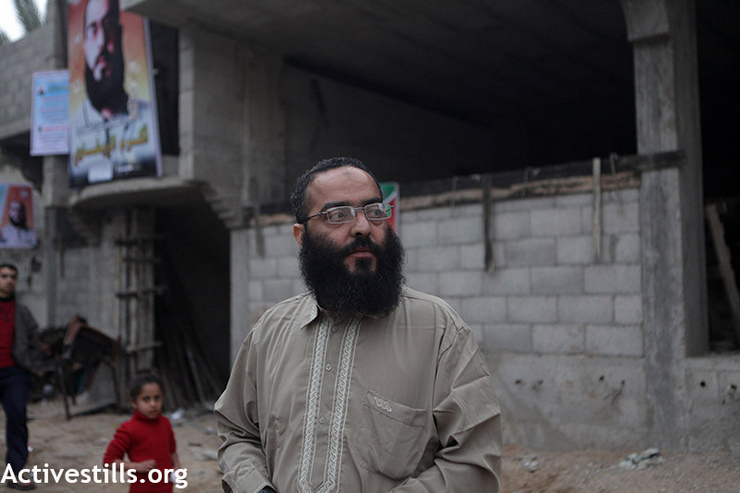 Akram Rikhawi, released three days ago after nine years in Israeli jails, and a hunger strike he endured for more than 100 days, Rafah, Gaza Strip, February 10, 2013. (Photo by: Anne Paq/Activestills.org) 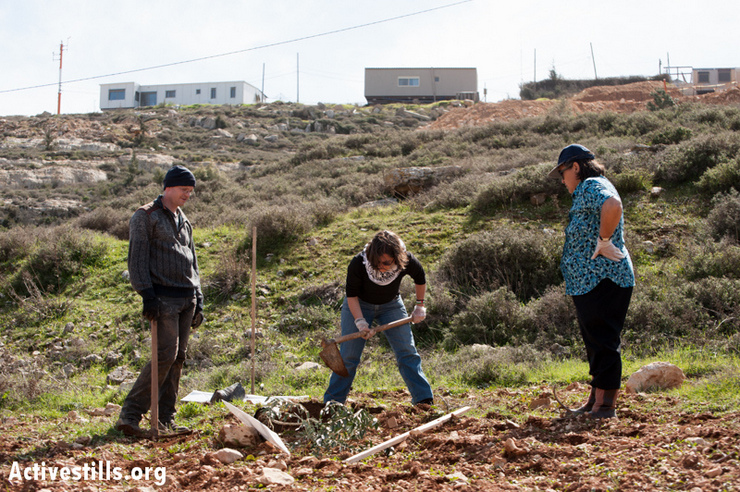 International volunteers plant olive trees in front of settler outposts belonging to Israel’s Gush Etzion bloc in the Ein El Qassis area of Al Khader village, West Bank, February 10, 2013. Israeli settler activists in the area known as “Women in Green” have planted their own trees in the area as a tactic for asserting control of the land. All Israeli settlement activity in the occupied Palestinian territories is illegal under international law. (Photo by: Ryan Rodrick Beiler/Activestills.org) 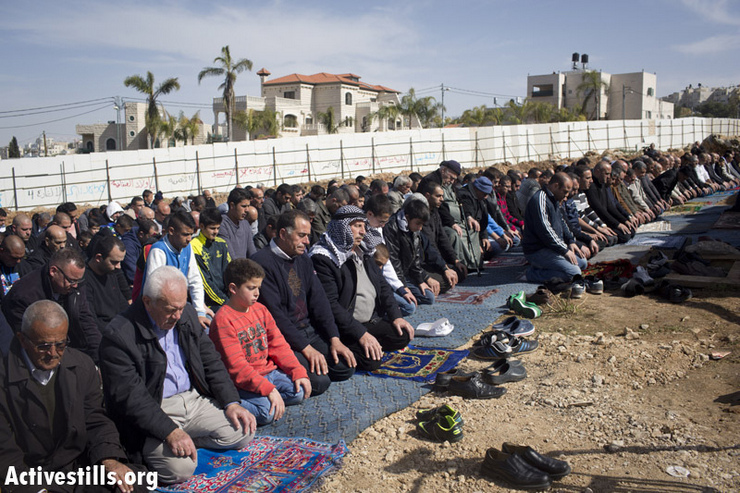 Residents of Beit Safafa pray on their lands in protest of the construction of a four lane highway being built through their village, February 8, 2013. The road is being constructed on privately owned land which was designated for building houses for the local residents of the densely populated town, and is being built despite their objections. The road will connect the various Jewish settlements in the Hebron area to Jerusalem and is part of an ongoing campaign to isolate and surround the Palestinian neighborhoods of Jerusalem with Jewish settlements. (Photo by: Oren Ziv/Activestills.org) 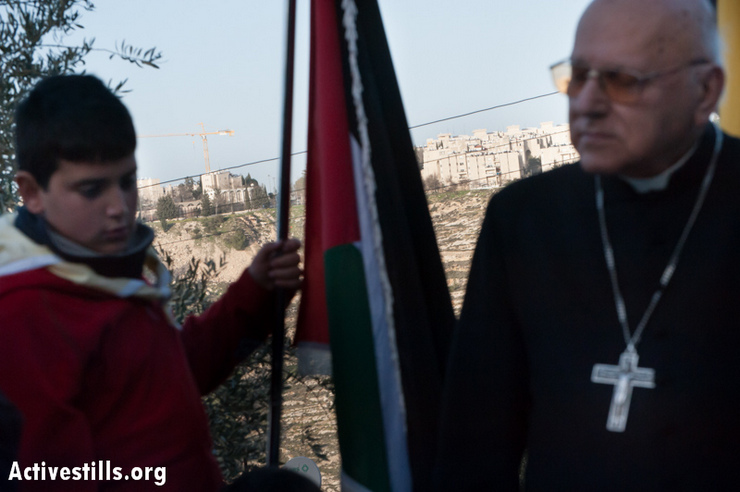 With the Israeli settlement Gilo visible on a nearby hillside, Monsignor Michel Sabbah, former Archbishop and Latin Patriarch of Jerusalem, leads Palestinian Christians in a prayer service as a nonviolent witness against the Israeli separation barrier in the West Bank town of Beit Jala, Februrary, 1, 2013. If constructed as planned, the barrier would cut off the Cremisan monastery and winery as well as agricultural lands belonging to Beit Jala. An Israeli court decision regarding the wall’s route is expected this week. (Photo by: Ryan Rodrick Beiler/Activestills.org) 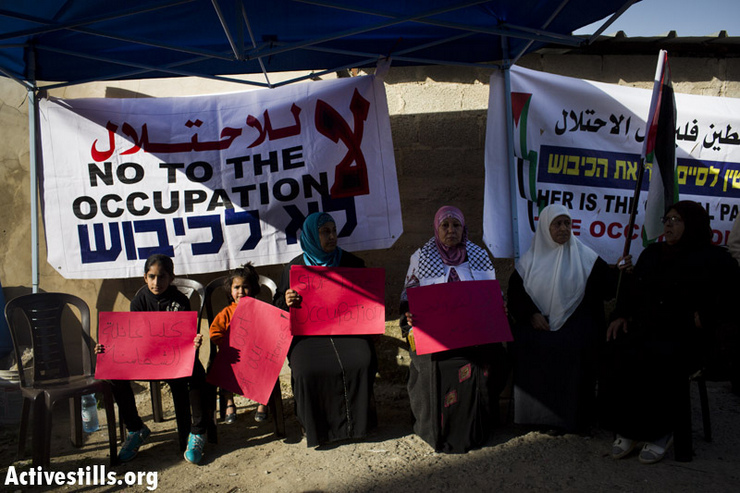 Palestinian women and children sit in a protest tent during a demonstration in support of the Shamasne family in the neighborhood of Sheikh Jarrah, East Jerusalem, February 8, 2013. The family received an eviction order from their house from an Israeli court forcing them to leave their home that will be given to Israeli settlers. (Photo by: Oren Ziv/ Activestills.org) 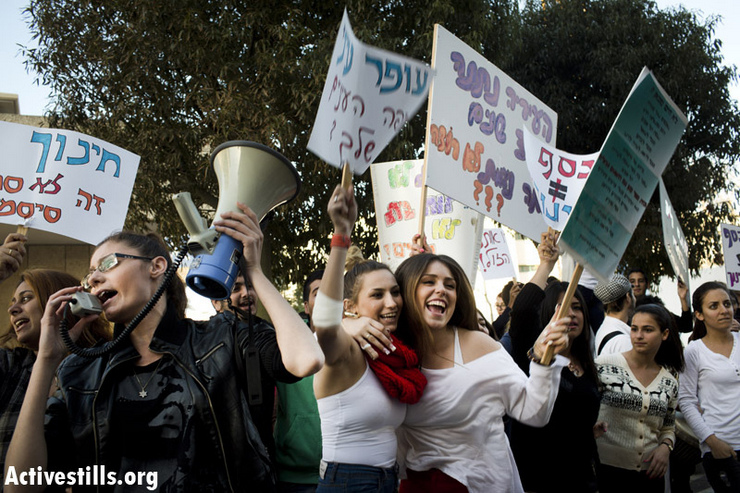 Israeli high school students protest in front of the offices of Naamat against the decision to close their school in Tel Aviv, February 12, 2013. The school, which serves students with learning disabilities, is owned by Naamat organization, which decided to sell the building to the Tel Aviv municipality. The students will be sent to other schools, which are not fitting thier educational needs. (Photo by: Oren Ziv/ Activestills.org) 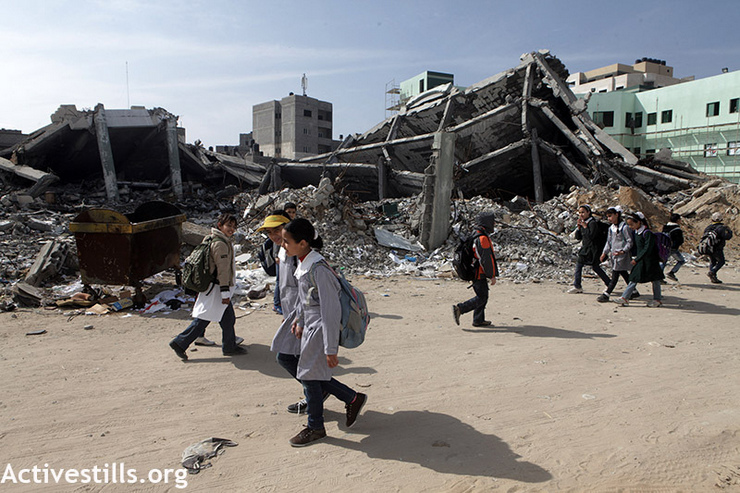 Palestinian children walk by demolished buildings of the Civil Department of the Interior Ministry, which were heavily bombed during last November’s Israeli assault against the Gaza Strip, February 10, 2013. (Photo by: Anne Paq/Activestills.org) 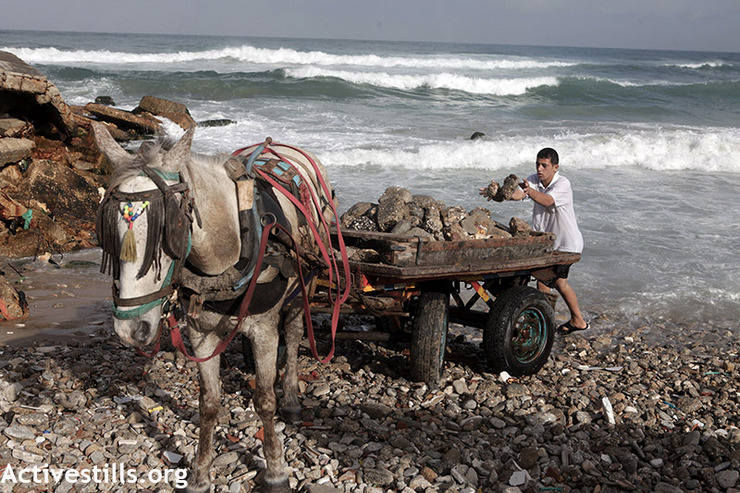 A Palestinian picks up stone aggregate in the sea on the shore of Gaza City, February 11, 2013. (Photo by: Anne Paq/Activestills.org)
Get Our Weekly Newsletter