An IDF video celebrates its efforts to protect Palestinian farmers during the olive harvest. But human rights groups have documented dozens of attacks in just the past couple of weeks. 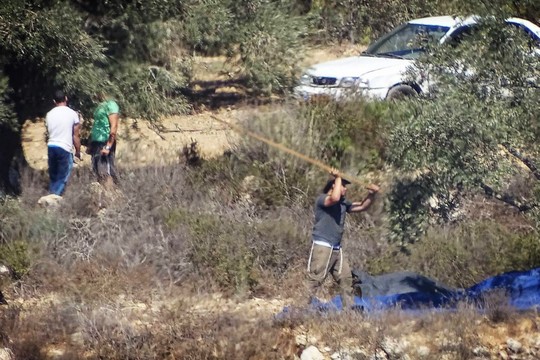 The Israeli military wants you to believe that it alone is responsible for ensuring that Palestinians can harvest their olive trees in peace. A new video, published on the Facebook page of the IDF’s Coordinator of Government Activities in the Territories (COGAT), the Israeli military government that oversees the occupation of the Palestinian territories, shows how COGAT, in its words, is “ensuring that Palestinian residents can harvest until the last olive this harvest season in Hebron.”

The video shows a farmer from Hebron who describes how secure he feels while harvesting his 90 olive trees because of the Israeli soldiers sent by COGAT to protect him. According to Hebron District Coordination Liaison Safa Izz al-Din, the harvest season “continues without problems.”

COGAT officials may be carrying out their respective roles, coordinating between farmers and security forces in order to allow them to work their land, but is the harvest season really going off without a hitch? Why do Palestinian farmers need protection in the first place? And from whom?

For the past two weeks, since the beginning of the harvest season, Israeli human rights NGO Yesh Din has documented around 20 incidents of violence against Palestinian farmers, including physical attacks, theft of olives, and destruction of trees. These follow a long list of violent attacks documented by Rabbis for Human Rights, including four separate incidents in which Israelis were caught stealing from Palestinians and were detained for questioning by security forces.

Among the incidents documented by Yesh Din in the last week alone was an attack on a Palestinian in the village of Klil while he was harvesting olives near the newly-established settler outpost of Meginei Haaretz. A day earlier, a Palestinian farmer from Yanun was attacked near the settlement of Itamar. Last Wednesday, a Palestinian from the village of Jit was attacked when she harvested her tree near the outpost of Havat Gilad. According to her, an Israeli threatened her, dumped the olives she had harvested, and tried to kick her off her land. Villagers from Al-Mughayer discovered on Sunday that 200 of their trees, located next to the Adei Ad outpost, were already harvested. Olives were also stolen from trees in the villages of Burin and Far’ata.

The Israeli army issued the following response to the aforementioned incidents:

IDF forces work on a daily basis during the olive harvest season to ensure that the harvesters can carry out their work securely. Securing the harvest includes preparations in which exact harvest times are coordinated ahead of time. For every coordinated harvest, IDF forces, along with other security forces, secure the area. IDF forces were not present in the cases listed in the article, as they were not coordinated ahead of time. In cases of property damage or theft outside the coordinated hours, the landowner may file a complaint with Israeli police.

Yael Marom is Just Vision’s public engagement manager in Israel and a co-editor of Local Call, where this article was first published in Hebrew. Read it here.