A Palestinian mother of two and her 16-year-old brother were shot and killed by Israeli security guards at Qalandiya checkpoint in April, even though eyewitnesses say they posed no risk. The police refuse to release the CCTV footage – maybe they know something we don’t? 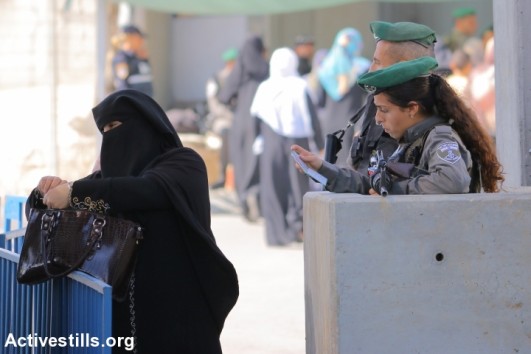 More than four months after a shooting at Qalandiya checkpoint that left dead a Palestinian woman and her 16-year-old brother, the Jerusalem Magistrates’ Court on Monday upheld Israel Police’s request to extend a gag order on the details of the affair and identity of the suspects by another month.

The police said that Maram Salah Hassan Abu Ismail, a 23-year-old mother of two from East Jerusalem, and Ibrahim Salah Taha, were shot after trying to carry out a stabbing attack, but eyewitnesses say told B’Tselem that they were shot without posing any risk to anyone.

The mystery would have been solved rather easily by releasing CCTV footage from the scene, but police have refused to do so.

Right after the shooting on April 27, police obtained a gag order that was endorsed by a Jerusalem Magistrates’ Court judge who said that the order was “necessary to carry out an unbiased investigation and safeguard public security.” This week it was extended until September 27.

According to the police, Maram and Ibrahim veered off the pedestrian lane into a vehicle area. A police spokesperson later said that “policemen and border policemen stationed at the checkpoint noticed a man and a woman walking into the vehicle-only area, while the woman’s hand was inside her handbag and the man was holding an unidentified object behind his back.” Their suspicion was raised.

It has since emerged that the shots were fired by civilian security guards, not the policemen, indicating that the latter didn’t feel in danger.

Although the gag order prevents us from publishing any details, eyewitness accounts cast serious doubt on the police version and indicate that at least the killing of the teenager was unjustified.

Irrespective of the CCTV footage, the police version doesn’t add up. First, not even police claim that the boy was anywhere near the officers or that he posed any risk to them. Why did they shoot to kill? Even if a knife was found in his belt after the event, as the police claim, he didn’t take it out.

Thoroughly undemocratic, gag orders have become standard procedure in Israel. The fact that even today, four months on, when the entire investigation is gagged – and not just, say, the identity of the suspects – raises serious concerns that the purpose of the gag orders isn’t just to sweep the whole affair under the carpet, but to cover it up as well.

*John Brown is the pseudonym of an Israeli academic and a blogger. This article was originally published in Hebrew on Local Call. Read it here.