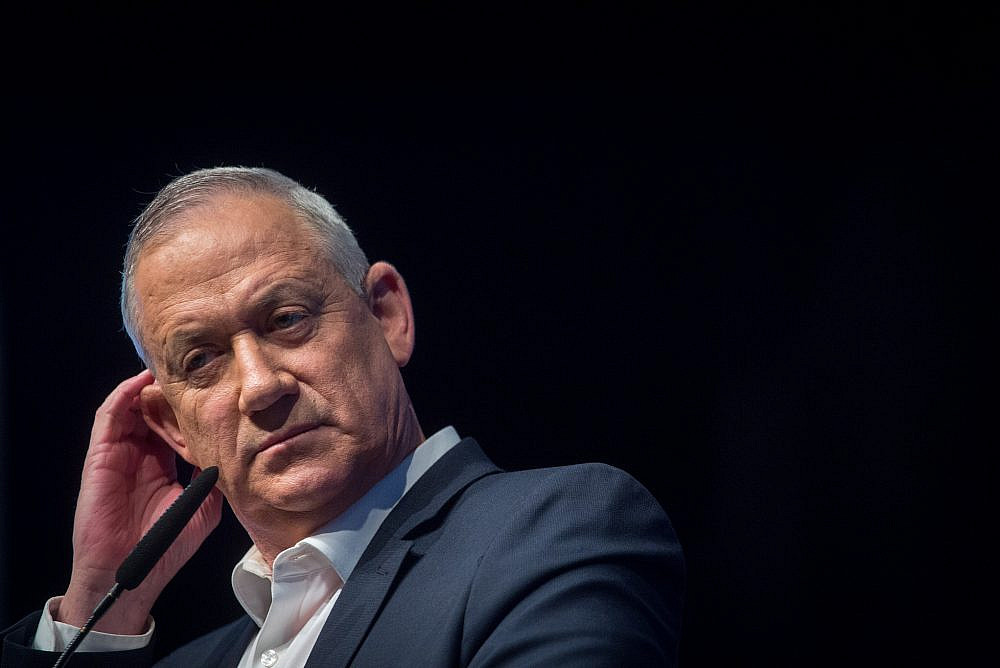 Head of the Blue and White party Benny Gantz at an election rally in Ramat Gan, ahead of the Israeli general elections, February 25, 2020. (Miriam Alster/Flash90)

For the third time in a year, Israel held parliamentary elections on Monday in an attempt to break a political stalemate that has lasted since late 2018. The deadlock began when former Defense Minister Avigdor Liberman withdrew from Benjamin Netanyahu’s government, ostensibly over a ceasefire agreement reached with Hamas, the Palestinian political party ruling the Gaza Strip.

While the results are not yet final, it appears that Netanyahu and his camp have good reason to celebrate. The campaign run by the main opposition party Blue and White, led by former army chief Benny Gantz, did not win enough seats to be the largest party, nor to form a governing coalition along with “center-left” allies. Short of an outright win, the results are perhaps the best scenario Netanyahu’s Likud party could have hoped for.

The political situation today is not fundamentally different from what it was in the fall of 2018, save for the fact that Netanyahu’s reputation as a teflon politician has grown even stronger after surviving repeated attempts to oust him.

How did this happen? The answer is actually quite simple: Blue and White bet that the Israeli electorate would choose the veneer of democratic principles — such as the rule of law, checks on power, and so on — over the brazen ideological pursuit of Jewish supremacy over the entire land from the Jordan to the Mediterranean, as advanced by Netanyahu and his allies. They lost that bet three times in a row.

In an effort to make democratic principles the decisive political issue, Gantz and his party presented themselves not as an alternative to the Likud, but as a carbon copy without the criminal indictments. Their message to Israeli voters was, “We’re everything you like about Netanyahu, minus the one thing you don’t.” 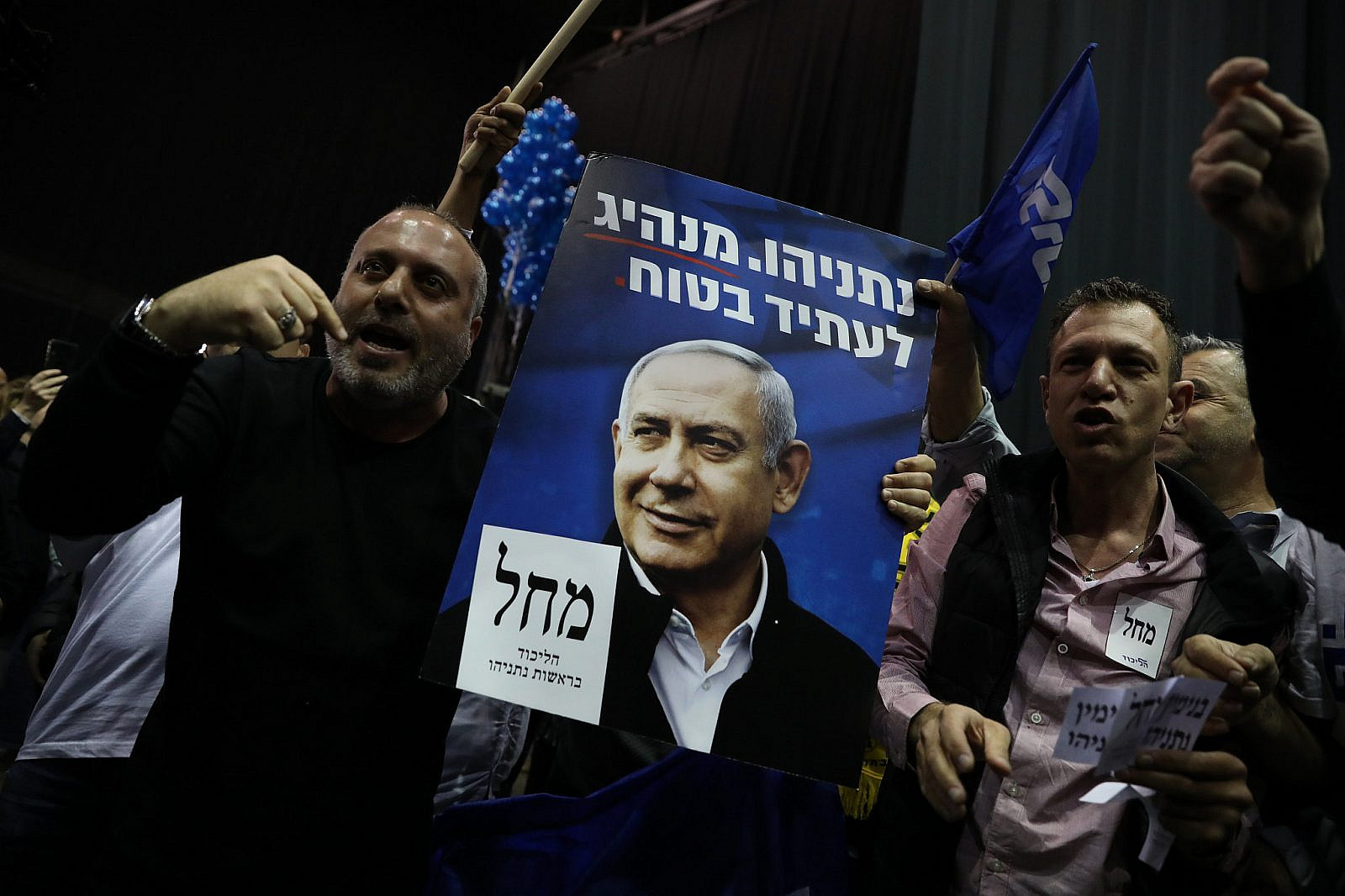 Likud supporters react to the results of the demo polls at the Likud headquarters on elections night in Tel Aviv, March 2, 2020. (Olivier Fitoussi/Flash90)

In line with this strategy, Gantz launched his initial campaign by boasting about how many Palestinians he had killed in Gaza, while the party stocked itself with other former generals like Gabi Ashkenazi and Moshe Ya’alon to combat the perception that Netanyahu’s opponents were soft on security. The alliance even took the moniker “Blue and White,” the most generic name you could give an Israeli political party.

Eventually, the theory went, Israeli voters would get tired of a corrupt prime minister and vote him out; and if they did not, Netanyahu’s time would still be up as his legal troubles followed him. When a court date was set for mid-March — just two weeks after the election — the hope grew that, when voters went to the polls, they would opt for Gantz, the indictment-free version of Netanyahu.

They didn’t. Blue and White’s theory was tested and failed time and again. This week’s election has instead given Netanyahu his largest seat-margin over Gantz out of all three contests. The closer Netanyahu seems to get to prison, the better he seems to do at the polls.

But Palestinians generally, and Palestinian citizens of Israel in particular, could have easily told you this would be the case. We have been watching and experiencing Israelis prioritize Zionist goals above democratic principles at our expense for over 70 years.

Corruption is not even the worst example of this phenomenon. The category of “nationality” as opposed to citizenship in Israel is designed to facilitate Jewish immigration at the exclusion of Palestinians. The state justifies unending military rule over Palestinians in the occupied territories under the pretext of security and expansionism. Time and again Israelis have supported Zionism over democracy; why should Gantz’s experiment turn out any different? 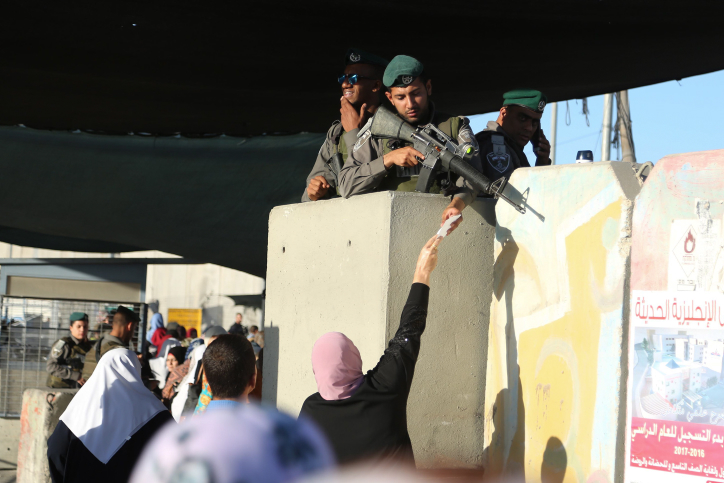 Why would Israelis choose to vote out a corrupt prime minister when they have long validated an inherently corrupt system? Why would they oppose a man who is actively pursuing immunity when they routinely demand immunity for their soldiers and generals from war crimes investigations and prosecution? Why would they oppose a politician who engages in theft and fraud when the entire state was built on stealing the property of others?

The truth is that, when faced with the prospect of advancing Jewish supremacy, Israel has always checked democratic principles at the door. Netanyahu understood this, and made his campaign about the defining tenets of Zionism: anti-Arabism and colonial expansion.

The biggest losers in this election, therefore, are those who thought there could be some balance between these two ideas in Israel: Liberal Zionists, who promoted the belief that a “Jewish and democratic” state is tenable in a land populated by non-Jewish Palestinians. But this election demonstrated again that even when you concede everything to the right on the oppression of the Palestinians, and try to make the conversation solely about democratic values, Netanyahu still wins.

As this election accelerates our inevitable arrival at a bi-national reality, it offers a useful reflection point for those still unwilling to accept the incompatibility of Zionism and democracy. In Israel and abroad, this result should serve as a clear sign that attempting to save Zionism from itself is a fool’s errand, and that any future of true coexistence requires saving Israelis and Palestinians alike from the corruption and inequality that Zionism imposes on them.