In a new podcast, I hoped to capture the impacts of the Gaza blockade that are mostly invisible to the outside world. There was just one problem: I can’t go there. When I first dreamed up the idea of doing a podcast about Gaza, I hoped to use the medium to get answers to my burning questions about life in the strip. I had seen Gaza covered in the news: military operations, billowing black smoke surrounding Gaza’s borders, and death counts of gunned-down protestors. But I wanted to understand what was happening through the eyes — or mouths, as it were — of the residents themselves.

For years, I have listened to podcasts whose investigative reporting wound tragedies around my ears. I wondered if I could get a listener, oceans away, to be similarly moved by someone in Gaza. Whether they tune in on a packed morning train or while walking their dog, as their headphones envelop them in the candid words of a people struggling for their autonomy, could their perspective shift?

Once I started my fellowship at Gisha – Legal Center for Freedom of Movement, I quickly understood how difficult it would be to collect these stories firsthand. While I can easily travel the world with my American passport, the people I wanted to hear from in Gaza have been landlocked by Israel for over a decade.

I learned that under Israel’s permit regime, a stringent set of criteria regulates the limited circumstances that people can enter or exit Gaza, denying residents their basic rights. I was naïve to think I could enter the strip somehow, when authorities would not even permit a man separated from his family for 12 years to visit his father in the West Bank who had just suffered a debilitating stroke, because he did not “meet the criteria” for receiving a permit.

So began the journey of documenting the effect of the closure on people in Gaza, with my primary obstacle being the lack of access to my subject. The first mini-series of Gaza Up Close, a podcast I eventually produced as part of my fellowship with Gisha, focuses on trailblazing women in Gaza. Even though Gisha’s office in Tel Aviv is only an hour’s-drive away from the strip, I had to do interviews over Skype. I planned to e-meet a young writer, teacher and mental health advocate in Gaza named Rawan, but right before our call, her electricity went out. There is a chronic shortage of electricity in the strip; eight hours of consecutive electricity are followed by eight hours of rolling blackouts.

After we rescheduled and finally spoke, Rawan told me that the way she copes with the constant fear of bombardments and the anxiety that grips her at the sight of rubble outside her window is to write about this reality for an online community. I was itching to hear the sounds of the environment around her and to share them with listeners. As I could not sit in on Rawan’s English class myself, she used her own phone to record a debate between two of her students over the context of globalization in their community, and sent it to me, to embed in the podcast.

We kept in touch afterward, and I was struck by how much we have in common. We are both applying for graduate school in the United States in the fall, but I realized our journeys to arrive there would be poles apart. Only after Rawan goes through the arduous process of permit applications and travel through military checkpoints will we have the chance to meet each other in person, on the other side of the world.

My next step in no-access podcasting about Gaza took me, in a roundabout way, to the West Bank. The owner of Al-Awda candy factory in Gaza, Mohammed Tilbani, is one of a few senior traders in Gaza who has a permit from Israel to exit and enter Gaza to conduct business outside the strip. In addition to his factory in Gaza, he recently opened a second factory in the West Bank, which seemed like a worthy alternative to visit if I could not see the renowned original. The day of the trip to the factory, I received a call that the Israeli authorities were holding Tilbani at Erez Crossing, without explanation. As my coworker Halah and I waited at the Tarqumiya checkpoint, where we had agreed to meet Tilbani, I nervously packed and repacked my audio recorder with new batteries, in the hopes we would still get to use it. 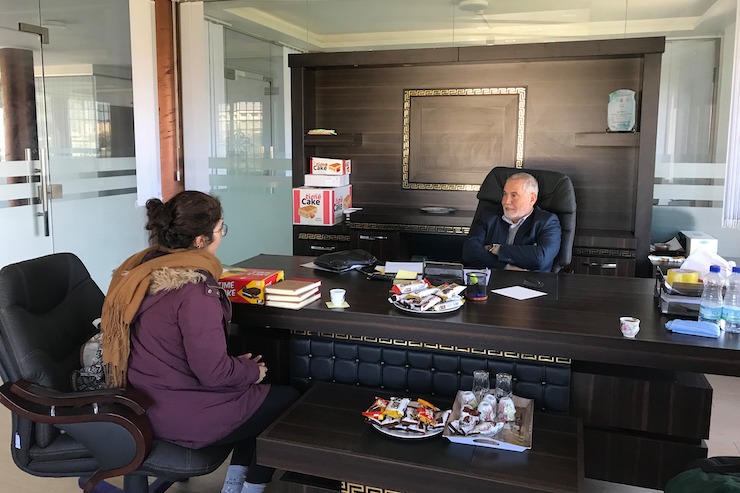 Mohammed Tilbani, one of few Palestinian merchants from Gaza with a permit to leave and enter the strip, at his candy factory in Hebron. (Photo courtesy of Lital Firestone)

After he was finally let through, Tilbani pulled up in his sharp business suit and drove us through the sunny hills of Hebron until we reached his factory. As we toured the massive expanse, with its almost 400 feet of conveyor belt, I wished I could record sounds of the workers dipping chocolate in cream and boxing up the colorful cakes to be consumed by sweet-toothed children, but the looming gray factory was deserted. Tilbani explained to us that they had to shut down production for the day because the raw materials they needed were not yet permitted to come through. Our voices echoed over the loud beeping of a factory in wait.

Despite the limitations, just the experience of meeting Tilbani in person, observing the inflections of his deep soothing voice and receiving his hospitality was invaluable to establishing the mood of the episode. I could not write a genuine script that reflected some of this man’s decades of perseverance without seeing what it was he built with his hands.

On our way back through the Israeli checkpoint, Halah and I were grilled by military personnel on why we had come to the West Bank and why we were crossing back through to Israel on foot. Passing through the checkpoint made me think about the reality of Israel’s control over movement to and from Gaza, where the effects of its barriers go mostly unseen by the outside world.

Israel uses an arbitrary, unintelligible permit regime to control countless aspects of life in Gaza, leaving people’s fates and futures hanging in a constant state of uncertainty. The attempt to do justice to this reality, given the various challenges, takes the form of a three-part series – a journey to make the unseen heard. You can hear from the people I “met” along the way by listening to the Gaza Up Close podcast.