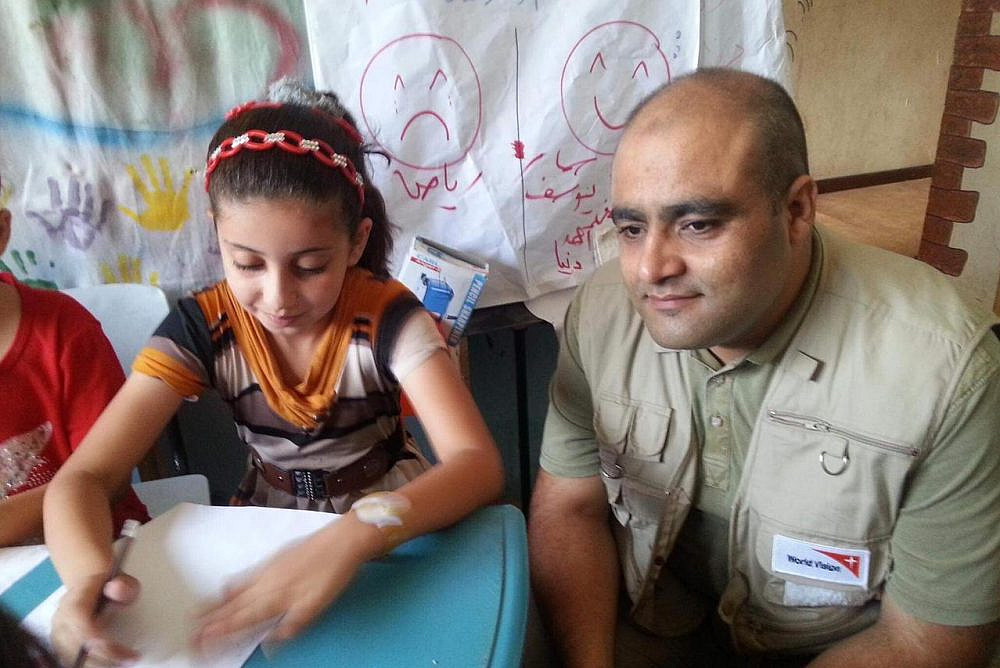 After one of the longest trials in Israeli history, which encompassed more than 160 court hearings spanning six years, an Israeli court on Aug. 30 sentenced Palestinian aid worker Mohammed Halabi to 12 years in prison on charges of funneling money to Hamas. Halabi, who used to serve as head of the Gaza office of Christian aid charity World Vision, was found guilty by the Be’er Sheva District Court in June of diverting $50 million of the organization’s funds to the Hamas authorities which govern the blockaded strip.

Throughout the Kafkaesque trial — conducted in almost complete secrecy since Halabi’s arrest in June 2016, and which has been condemned by several of the world’s leading human rights organizations — the 45-year-old Palestinian has always maintained his innocence. He has been separated from his five children and family in Gaza, refusing to capitulate to Israel’s demands that he admit his guilt and take a fraudulent plea deal.

World Vision, which has stood behind Halabi throughout the trial, continued to defend their former employee following the sentencing. “We have not seen anything that makes us question our conclusion that Mohammed is innocent of all the charges,” they wrote in an official statement.

Omar Shakir, the Israel and Palestine Director at Human Rights Watch, was more direct, calling the sentence a “profound miscarriage of justice.” He condemned Israel for “holding Halabi for six years based on secret evidence, which multiple investigations rejected,” adding: “The Halabi case exposes how Israel uses its legal system to provide a veneer of legality to mask its ugly apartheid over millions of Palestinians.”

Halabi’s case is the latest illustration of a rigged Israeli justice system that actively discriminates against Palestinians and non-Jews. But his story provides more than just a window into the Israeli occupation. Alongside the deafening silence of Israel’s allies that purport to support democracy, Halabi’s sentencing exemplifies just how far Israel will go in its assault on Palestinian civil society. 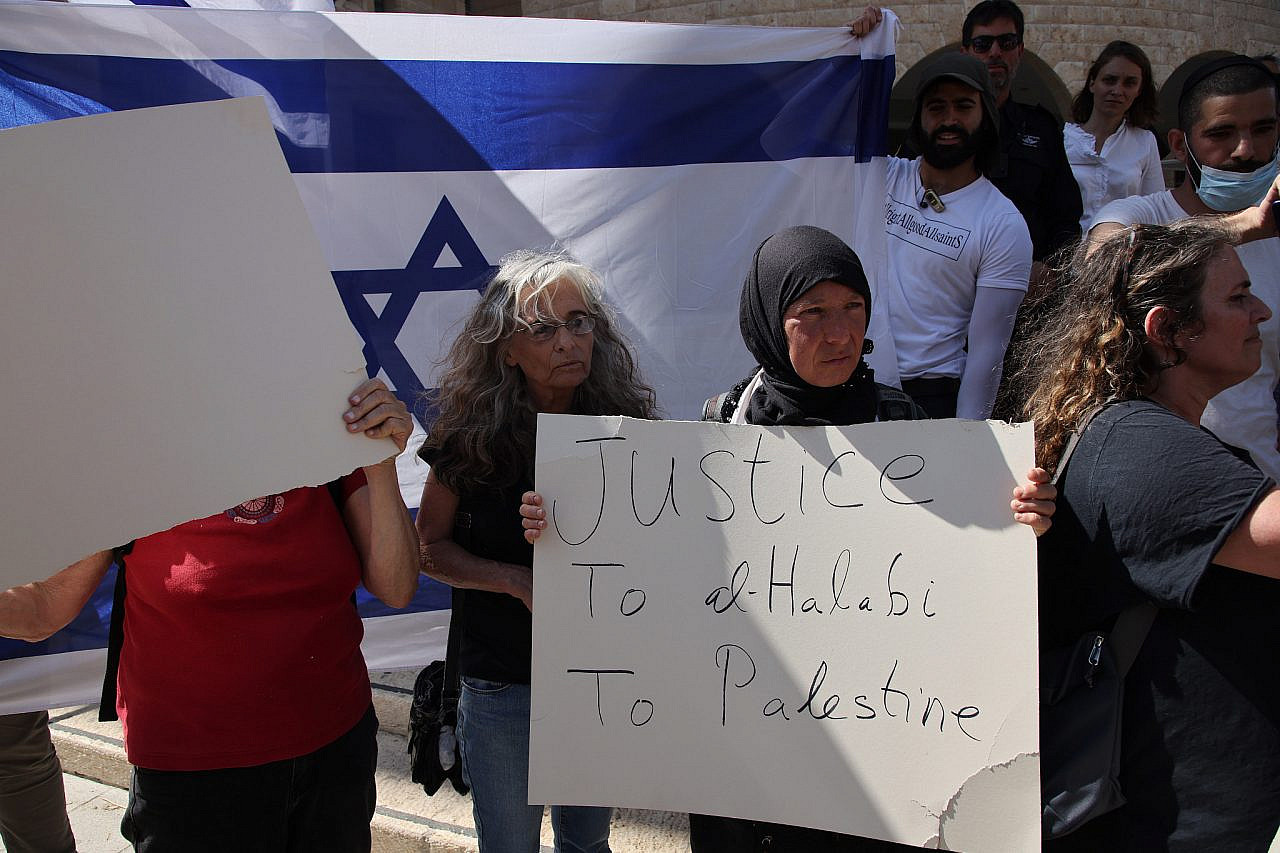 A protest outside the Be’er Sheva District Court in support of Mohammed Halabi is met with a counter-protest in favor of him being charged, June 15, 2022. (Oren Ziv)

Speaking to +972 Magazine from Gaza after the sentencing, Mohammed’s father Khalil said that he will “continue to struggle first in the Israeli [district] courts and then appeal [to the Israeli Supreme Court]” in order to achieve justice. “After that, the courts in European countries and America,” until Israel apologizes for arresting Mohammed, he added.

Khalil, who worked for years at the United Nations Relief and Works Agency (UNRWA) in Gaza, said that Mohammed’s children understand that their father is innocent. “I explained to them and raised their spirits. I always tell them that justice will prevail in their father’s case. The world stands with him as well as the Israelis who love justice and peace.”

A total lack of evidence

Israel arrested Halabi at the Erez Crossing between Israel and the besieged Gaza Strip in June 2016, and he disappeared for weeks. Two months later, Israel announced that he had confessed to diverting $50 million to Hamas coffers, with then-Prime Minister Benjamin Netanyahu referencing the arrest without mentioning Halabi by name.

International aid organizations, and donor countries like Germany and Australia, immediately halted all aid payments to World Vision in Gaza, leaving thousands of Palestinians in aid limbo and hundreds without a job. World Vision has not been able to operate in Gaza ever since.

World Vision undertook an expensive audit of its work in Gaza to determine if any money was missing. The auditing firm Deloitte and U.S. law firm DLA Piper found no evidence of wrong-doing, no illegal actions, and no credible evidence that Halabi worked for Hamas (in fact, his family were known opponents of the group). The aid organization also stated that its entire ten-year Gaza budget was $22.5 million, making a mockery of the claim that El-Halabi stole $50 million. 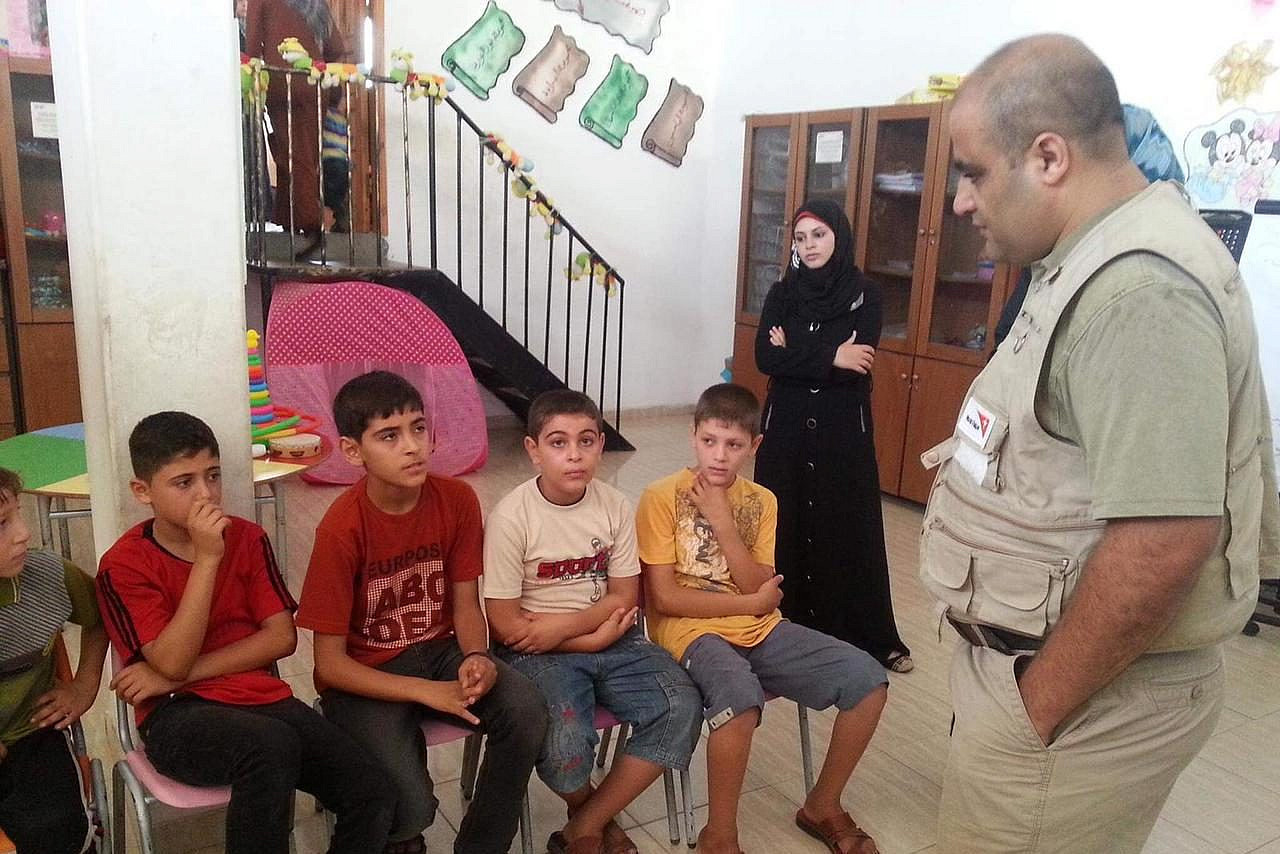 Australia, a key funder of World Vision’s Gaza programs, immediately conducted its own investigation into Israel’s serious allegations. It, too, found nothing.

Then-head of World Vision Australia, Baptist Minister Tim Costello, told +972 that the entire case was a “slur on Australian tax-payers, our integrity. Australia’s aid budget was on trial and yet no tax-payer money went missing. There must be an official Australian government response, even if behind closed doors in private, to condemn the [Halabi] decision.”

At the time of writing, the Australian government has remained silent, though three Greens Senators in the Federal Parliament have condemned the sentence. Australia has for many years been one of Israel’s most faithful allies.

“It’s a transparently ideological decision”, Costello told +972. “Israel wants to say that we’re a democracy with equality before the law, but Palestinians don’t have this equality. Let justice roll on like a river.”

Halabi says that he was tortured by the Israeli authorities while in detention in 2016, including being punched in the head which has left him with ongoing hearing problems. He was forced into stress positions, deprived of food and sleep, and placed in a cell with a Palestinian informant, a self-declared member of Hamas. Such coercive tactics are not unusual: Israel has a long history of torturing Palestinians in its custody to force them into a false confession and accepting a plea deal with a reduced sentence.

After being trapped in a room with the man for days, Halabi told his Palestinian lawyer, Maher Hanna, that he could no longer withstand the treatment. Halabi admitted to whatever the interrogators wanted after being placed under intolerable duress, said Hanna. Several UN special rapporteurs have deemed the detention and interrogation of Halabi “may amount to torture.” 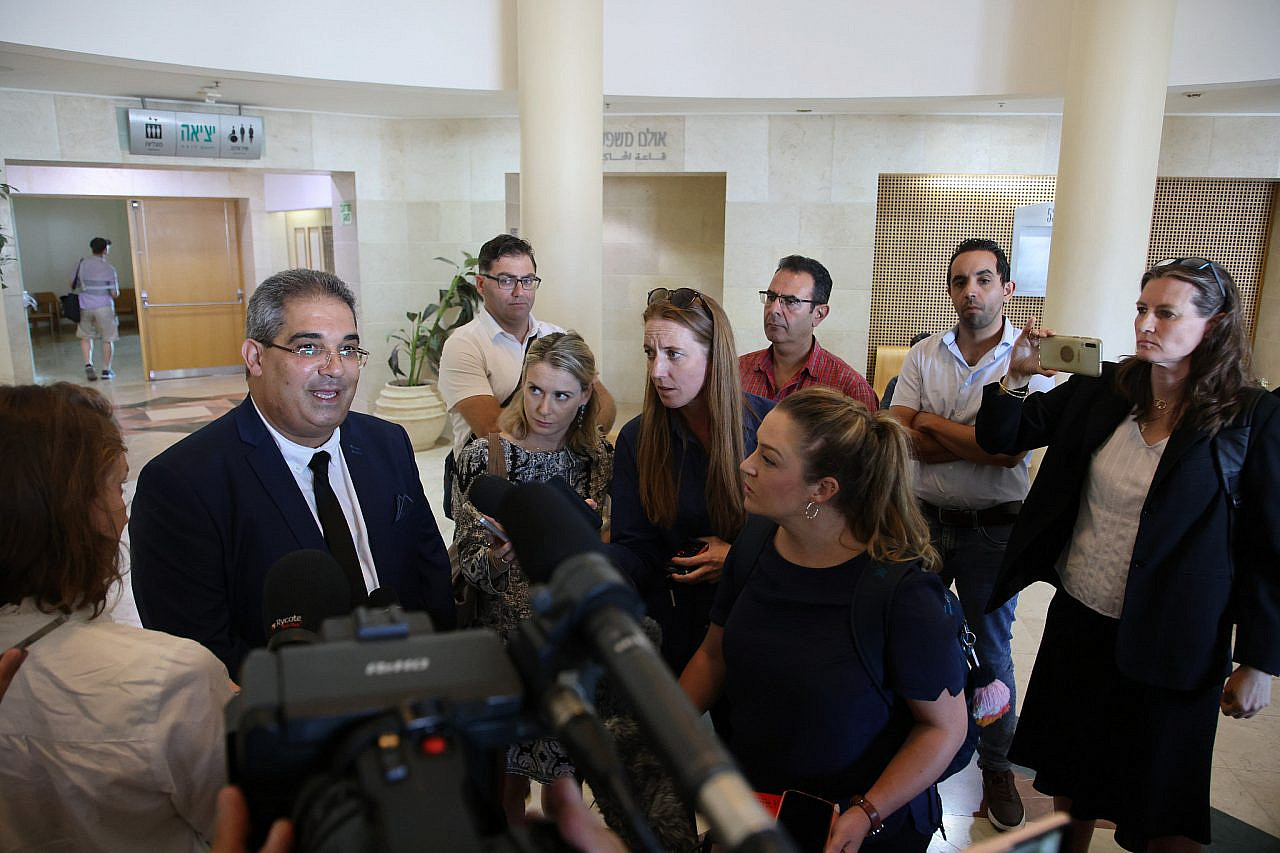 Halabi, meanwhile, didn’t believe that any credible Israeli court would take the process seriously, and so retracted his confession. But for six long years, he suffered through interminable delays, lack of evidence in open court, and an Israeli legal system that refused to allow credible witnesses to be heard.

For the Israeli prosecution, the simple fact that the numbers didn’t add up — that Halabi never had access to anything close to $50 million — was irrelevant. They had what they claimed was an admission from the aid worker while in detention, and that was enough. None of this was ever tested in a fair and open court; rather, the prosecution was allowed to present all its so-called “secret evidence” in closed sessions.

The bulk of the international community either remained silent during this sham process or claimed that they couldn’t respond until its completion — a position that suited Israel perfectly.

After the sentencing in late August, for example, the British Consulate in Jerusalem merely tweeted that it was “concerned,” while the European Union Delegation to the Palestinians tweeted that it “regrets the outcome.” The EU is Israel’s biggest trading partner — a solid relationship that is flourishing despite public disquiet over Israel’s attempts to crush prominent Palestinian civil society groups, many of which receive funds from European governments. 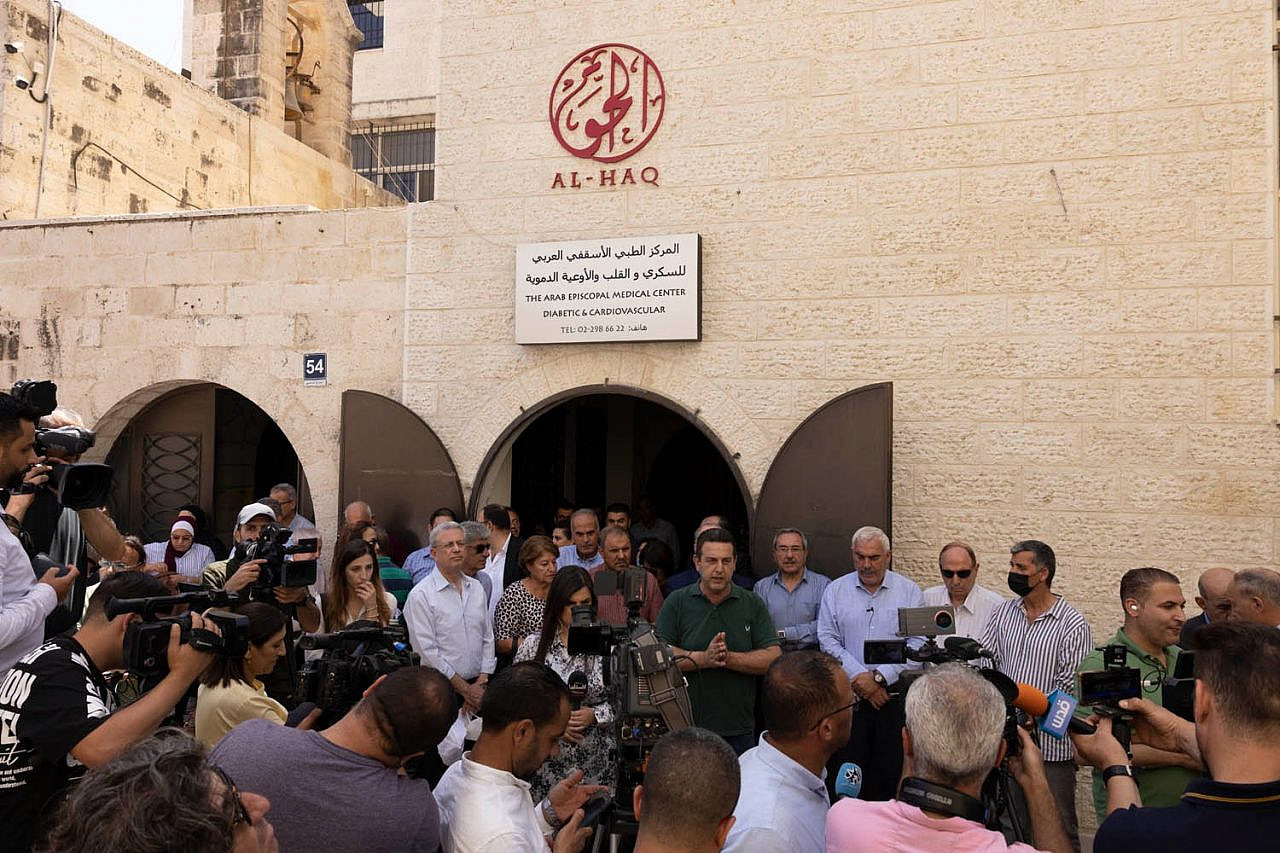 Heads of Palestinian NGOs speak to the media outside of Al-Haq’s offices after the Israeli army raided their offices, Ramallah, West Bank, August 18, 2022. (Oren Ziv)

The crux of the case, as lawyer Maher Hanna stressed to +972 last week, was Halabi’s unwillingness to admit to a crime that he didn’t commit. During a March 2017 hearing, an Israeli district court judge encouraged him to take a plea bargain because he had “little chance” of not being found guilty. “You’ve read the numbers and the statistics,” the judge continued, hinting at the military courts’ conviction rates. “You know how these issues are handled.”

“At first, he was offered three years, then four and then six and finally eight,” Hanna explained from Jerusalem. But Halabi refused to accept any of these offers, and was consequently sentenced to 12 years in prison.

Even with the sentencing, the prosecution has threatened to appeal for a harsher sentence. “It’s difficult to understand the prosecution’s change in position,” said Hanna. “It was willing to settle for a sentence of three years if there was a confession, but not willing to accept a sentence of 12 years when the defendant proclaimed his innocence — regarding the same alleged act.”

Hanna added: “It’s important to the prosecution, and also to the court, to send a message to all Palestinian detainees and prisoners that anyone who does not accept a prison sentence in a plea bargain and forces the system to hear his defence will be severely punished.”

In a 2019 investigation for +972 Magazine, I detailed the litany of reasons that the trial failed to meet even the most basic international standards of fairness. Halabi himself told me in the same year that he believed the entire case against him was a “fishing expedition in order to attempt to increase the siege on the residents of Gaza. They were not only attacking me but the entire system of humanitarian aid to Gaza, of which I was only a part.” 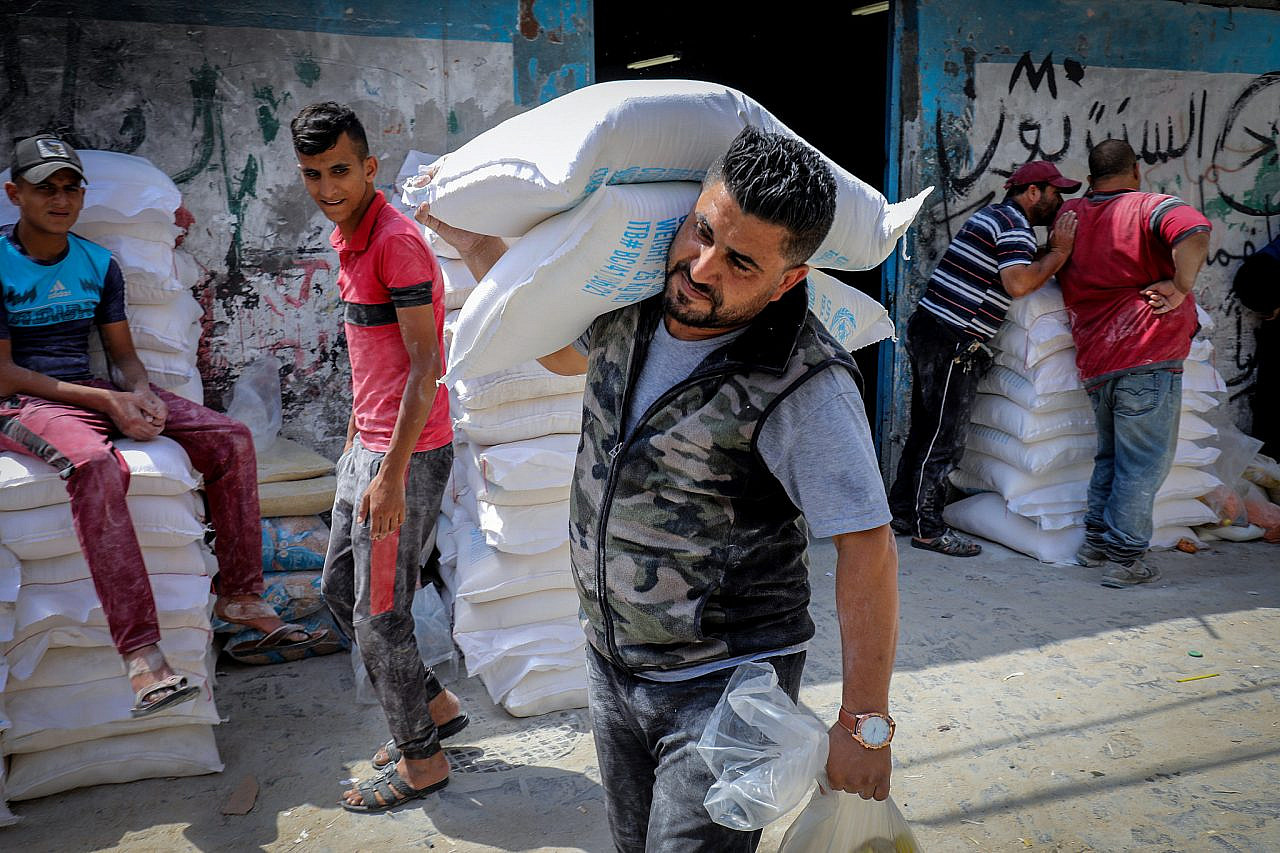 Hanna was shocked by the court’s sentence and appalled that the judges dismissed most of Mohammed’s claims. “They literally ignored all the problems in the case as if no such claims had been made. They were really surprised when they heard the claims during the arguments for sentencing and admitted that they may have been wrong, but they ‘must maintain consistency.’”

Israel is currently waging a wider war on Palestinian civil society, determined to shut down prominent NGOs and neuter their potency in the battle for global public opinion. Like in the Halabi case, where no evidence exists to prove his guilt, the Israeli government hopes that its bogus allegations of terrorism against leading Palestinian NGOs will silence and deter them.

Hanna, meanwhile, is still holding on to hope for Halabi. “At this point, we expect the Supreme Court will overturn such a ruling,” he said. “This is a modern-day Dreyfus trial, and the State of Israel cannot afford to have such a stain on its court system.”