Does Israel have the right to turn millions of the people under its control into prisoners simply because it is afraid of what might happen once they are released? 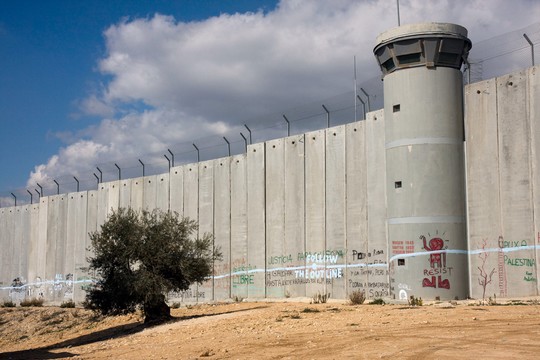 The UNHRC report on Gaza and testimonies published by local watchdog group “Breaking the Silence” have sparked yet another round of debate over the IDF’s moral standards, or lack thereof. These debates have become yet another way for Israeli society — and at times, the international community — to talk about the occupation without actually discussing it. My heart goes out to the people at Breaking the Silence, since I have a feeling that this time around they are in the midst of a war they cannot win.

The objective of the Israeli occupation is control. In fact, that has long been Israel’s goal vis-a-vis the entire Palestinian people, even before 1967. Unlike many Palestinians, I do not think that the Zionist movement made a decision to ethnically cleanse the land of its residents; 1948 was the exception — not the rule. In the years following the war, and to this day, Palestinians have been removed from their homes and land, but in most cases they are not expelled from the country. In fact, the Israeli strategy stems from a recognition — on the part of the ruling elites, including both Labor and Likud — that the Palestinian population will ultimately remain here alongside the Jewish population.

There is zero chance that Palestinians in the West Bank and Gaza will ever agree to their current situation of their own volition. And unlike most other occupying powers eventually do, Israel is not interested in granting them citizenship. Therefore, Israel’s only course of action is to control the Palestinians by force. This has been the objective of Israeli policy for decades, again, with the support of Labor and Likud alike.

This objective is the only way to explain the many actions Israel takes, which are sometimes improvised, other times planned ahead of time, and often seem to contradict each other. In practice, they are all put in place to maintain a system of control. This is the line of thinking that connects the anti-democratic legislation in the Knesset, the military operations in Gaza and the prime minister’s declared war on the BDS movement.

Testimonies: ‘This is how we fought in Gaza’

In order to maintain this policy, Israel has turned the West Bank and the Gaza Strip into a giant prison (Egypt helps by sealing in Gaza from the south). Like in all prisons, the guards strip the prisoners of almost all their rights, aside from those that they are willing to grant, usually in return for good behavior. Such privileges can include work permits, travel permits, or visitation rights. A Palestinian needs permission from the army to leave and return to the country. A foreign national who lands in Israel risks deportation should they openly state their intention to travel to the West Bank (save for a few exceptions).

Take note of how Israelis see nearly every “right” granted to Palestinians in the occupied territories as a “concession” or a “privilege”— the privilege to leave the country (which was recently given and then subsequently denied to 500 people due to a single crime that none of them had any connection to); the “privilege” to build homes; the “privilege” to host friends; the “privilege” of being given work permits. None of these rights are granted simply because Palestinians are human. They are carrots and sticks used to leverage an entire population, whose only goal is to maintain quiet (“peace”). This is how prison works. That is how guards speak. 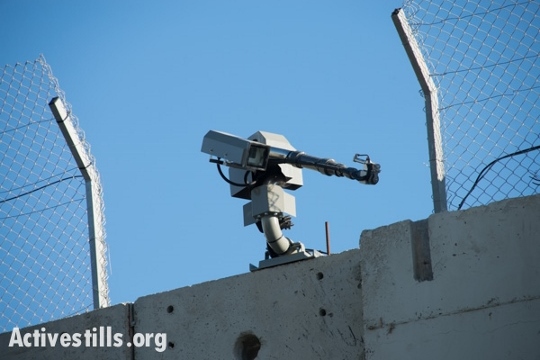 Israel is a democracy that maintains a sub-regime that is a dictatorship. The prisoner cannot resist his or her imprisonment, which is how Israel sees every political (or military) action by the Palestinians. The Palestinians cannot, obviously, attack their guards. They cannot throw stones, they cannot call for boycotts, they cannot turn to the UN, they cannot go on hunger strike, they cannot attempt to sail to Gaza, etc. In the spirit of the times, every single one of these actions is labeled “terrorism”—meaning that they are beyond the pale of legitimate political conduct, and therefore must be fought using any and all means.

Israeli society has become accustomed to this guard-prisoner relationship over the last few decades. The IDF went from being a traditional military, whose expertise is in large-scale, offensive maneuvering, to an army that leads the world in maintaining order (over prisoners, that is). Actually, many places in the West Bank and on the border with Gaza already look very much like a prison. Israel’s technological developments — tracking systems, remote crowd dispersal methods, UAVs, remote assassination methods that cause as little collateral damage as possible — are intended to maintain that prison at both minimal cost and minimal victims. Groups of Israeli generals travel the world in order to market the experience we have gained in holding a civilian population under our control. This kind of expertise will always be in demand.

Alongside the generals is an entire system that creates an ideology of occupation — a public sense of justice. We can read about it in the weekend edition of every major newspaper. The differences are insignificant between Yedioth columnist Ben-Dror Yemini with his BDS obsession, the military correspondents who talk about “security challenges in the territories,” Haaretz columnist Ari Shavit’s talk of delegitimization and proper right-wing ideologists. Their goal is to justify the various aspects of controlling the Palestinians, without actually talking about the elephant in the room: the degree to which that control is legitimate in the first place.

Israel has no intention of granting citizenship to Palestinians under its control. In contrast to what Israelis tell themselves, we have no intention of separating from even some of the Palestinians either (full separation is impossible since the two populations are far too mixed at this point). If Israel intended to, we would have already left the West Bank and stopped controlling everything that happens there. But we won’t do it, since such a move carries an internal political price, not to mention serious dangers. The Right’s nightmare scenario  —rockets on Tel Aviv, for instance — is a real possibility.

It is also obvious that no agreement will fully ensure Israel’s security; even if Mahmoud Abbas becomes a card-carrying Likud member tomorrow, there is no telling who will be in charge of a Palestinian state five years from now. Therefore, any withdrawal, regardless of a peace agreement, is a real risk. This was true 10 years ago, it is true now, and it will be true in the future.

Yet this is precisely the issue of putting an end to foreign rule — once you no longer control the other side, you have no idea what it will do, and you need to come up with other ways to maintain relatively peaceful relations with it. The risks is such a case are unavoidable and Israelis are simply not willing to take them. This is why they choose leaders who promise not to reach peace agreements, and why there is a better chance for a temporary agreement with Hamas in Gaza than a permanent accord with Abbas, which could translate to an irreversible loss of control with the establishment of a Palestinian state. 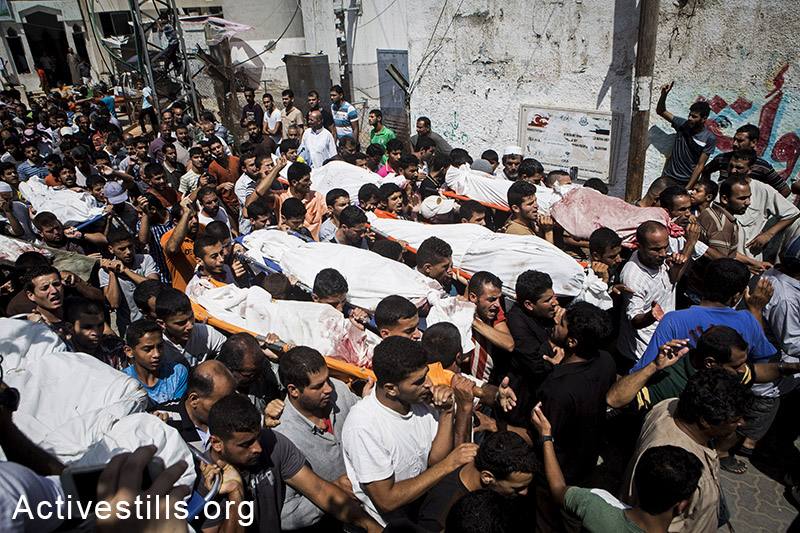 Funeral in Bani Suhaila for the 21 members of the Al-Najjar family, who were killed just before the ceasefire, east of Khan Younis, Gaza Strip, July 21, 2014. The Al-Najjar family fled their homes in Khuza’a to take refuge further west. (photo: Activestills.org)

Israel receives special attention from time to time because the occupation is exceptional among the nations of the world. What other legitimate member of the international community seeks to continue imprisoning (at least) a third of its population? This is the real issue that lies at the root of all military operations and their many victims. The occupation systematically denies Palestinians their human rights, and it continues unabated, regardless of the circumstances of every flare up or round of violence.

At the end of the day, the debate over the IDF’s morality — which makes headlines every time an NGO publishes a report or the murder of an innocent person is exposed — is a distraction. It is convenient for Israel and its citizens to cope with that question, since if we prove that the army makes every effort to continue controlling Palestinians with the minimum amount of innocent victims, we will feel better about ourselves and our international image won’t be tarnished. And when we cannot prove as much, we can always replace the question of morality with one of discipline: the soldier who didn’t follow orders, the commander who gave problematic orders. And hey, what is happening in Syria is way worse.

But even if another army killed 4,000 people — or 40,000 — in Gaza, would that make Israel’s policies legitimate? Does this country have a right to turn millions of the people under its control — a civilian population — into prisoners, because it is afraid of what will happen once they are released? Can we expect anything from this policy but repeated cycles of “security challenges” and “military responses?” I do not believe so, but I appreciate the honesty of the few who are willing to say “yes.” Most Israelis simply ignore the question.