As Israeli soldiers shot at Palestinian demonstrators, Gazan and Israeli activists join each other — on two sides of the fence — for tea, a symbolic act of longing for a day without barriers and aggression.

Six Israeli activists held a tea party on the fence with Gaza, in solidarity with Palestinians demonstrating at the Great Return March on September 7, 2018. (Haim Schwarczenberg)

Last Friday at dusk, I shared a picnic blanket with dear friends, on a country hill, near a beautiful orchard, sipping tea in porcelain cups, mixed with tears and tear gas.

In front of us, we watched how thousands of Palestinian demonstrators marched, as they have done every Friday for over four months now, trying to reach the fence that separates us from them, the fence that seals the 2 million inhabitants of Gaza into the largest open-air prison on earth. We heard continuous shooting, and blasts, and saw the plumes of white tear gas weave into the pillar of black smoke from the burning tires. We heard the sirens of an ambulance, then another, and another, more and more. Six Israelis, quietly sitting near an orchard and a dirt road, we sipped our tea solemnly as we watched our own military shoot the trapped demonstrators.

Unlike the soldiers, we were invited to be there. We were invited by the Palestinian organizers to share tea with them, to signify our solidarity and our joint hope for a day without fences and killing, a day when all the refugees could return home, to Palestine. After four months of the Great March of Return, with over 1,750 Gazans injured and 180 killed, about 7,500 showed up again to face the soldiers, and all we were asked to do is come for tea.

We sipped some tea. We called our hosts by phone, hearing their voices through the shouts and the blasts. Suddenly, we heard the crowd roar and cheer – the demonstrators have taken down a tear gas drone. We cheered with them, just as the wind shifted, and we were engulfed in tear gas not meant for us.

Only six of us on that hill, where there should have been thousands. Media crews standing right next to us ignored us completely. We raised high flags, hoping to be seen by the demonstrators. On the phone, they said they could see us, and for a moment, this ludicrous tea party felt absolutely right.

Within three minutes, the soldiers arrived. They did not mind the tea, but the flags they found disruptive. We were accompanied out, driving through the fields under a mesmerizing, spectacular sunset.

There were 210 demonstrators injured that day near that fence, including 15 children, and 45 of them by live gunfire. Two teens from the city of Rafah were killed by Israeli snipers: Belal Mustafa Khafaja, 17, and Ahmad Masbah Abu Tuyur, only 16, who succumbed to his wounds on Saturday. May their memory be a blessing.

Dalit Baum is an activist with returnsolidarity. A version of this article was first posted here. The photos and video report are courtesy of Haim Schwarczenberg, you can find more of his work on his blog.

Get Our Weekly Newsletter
Before you go…
A lot of work goes into creating articles like the one you just read. +972 Magazine is nonprofit journalism, owned by many of our writers, editors, and journalists. In order to safeguard that independent voice, we are proud to count you, our readers, as our most important supporters. With your support, we can keep +972 Magazine a strong, independent, and sustainable force helping push the global discourse on Israel/Palestine.
DONATE
More About right of return 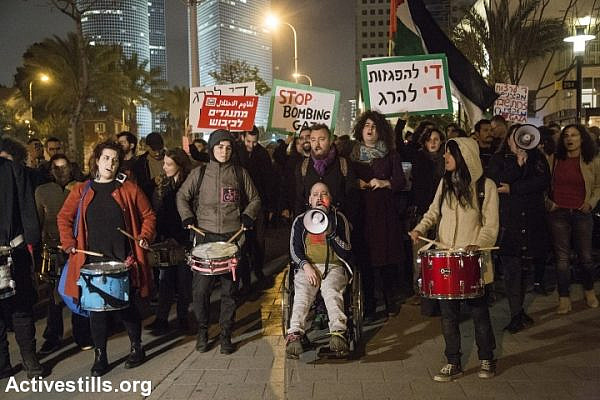 Hundreds of Israelis protest Gaza blockade outside IDF headquarters
The demonstration in the heart of Tel Aviv was in solidarity with Palestinians taking part in the Great March of Return. By +972 Magazine Staff, Photos by Keren Manor/Activestills.org Hundreds of Israelis demonstrated in solidarity with Gaza protesters Saturday evening outside Israeli military headquarters in central Tel Aviv, marking Land Day and one year since the…
By +972 Magazine March 31, 2019