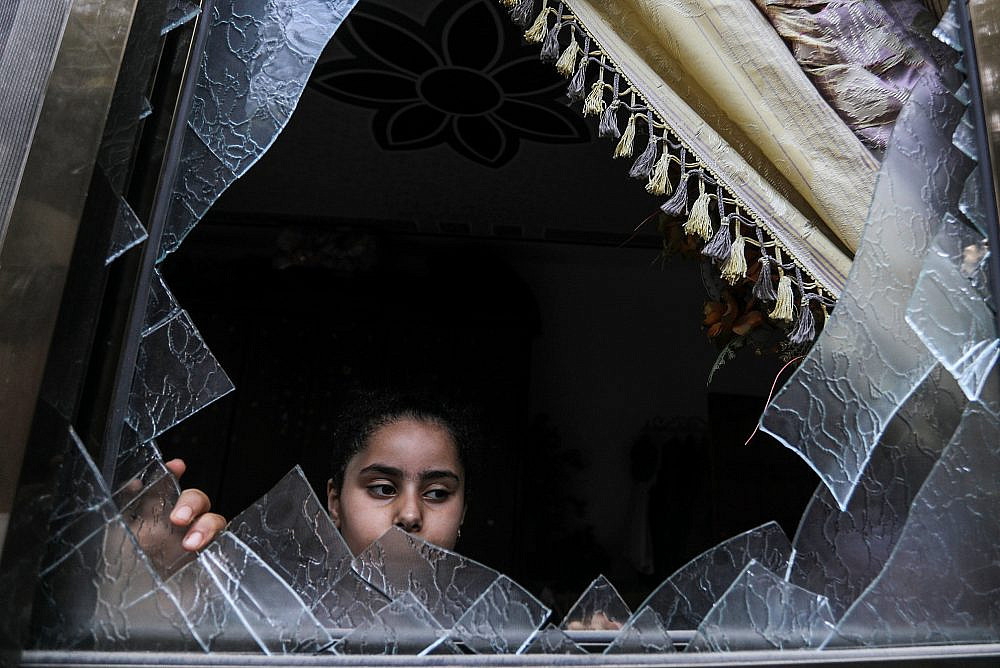 A Palestinian girl looks at the damage to a house following an Israeli airstrike in Rafah, Gaza Strip, August 8, 2022. (Abed Rahim Khatib/Flash90)

The following was recorded over a phone call on August 7, 2022, a few hours before a ceasefire between Israel and Islamic Jihad was announced to halt the latest armed escalations. A version was first published in Hebrew on “We Beyond the Fence,” and has been edited for clarity.

I’m speaking to you now with my three children here with me. I have put everyone into the same room in our home, where we will all sleep, so that if they bomb us at night, we’ll be together. So that if we die, we’ll die together. That’s how I explain it to the young ones; it’s how I comfort them, and how they comfort me.

They are very scared. Of course they are. The Palestine Tower, which was bombed by Israel on Friday, is just a few meters away from our home. My children literally cannot stand up because of the fear. My eldest, who is 10 years old, is in such pain that it paralyzes his leg. My middle child is six, my youngest is just four months.

Everyone I meet in Gaza wants a ceasefire. They yearn for it. The situation is truly difficult. We’re finished. Every person I speak to is under terrible distress, wishing that the war does not persist.

The street outside is terribly dark now. You can’t see anything. For two days, there’s been no electricity in Gaza. Everything has collapsed because the Israeli army is preventing the entry of fuel. Before the war, the electricity came on for six hours a day, sometimes eight. Now there’s nothing at all. It came on for one hour overnight, but we missed it. My phone battery will die in a moment. I’ll speak fast. It’s terribly hot today without electricity to power the fans, but I’m scared to go outside into the fresh air. And without electricity, there’s also no running water in the sink nor in the toilet at home. I’ve had to put a bucket in the bathroom instead.

The war arrived so suddenly. No one expected it, nobody was interested in it. We had planned to go out to protest on Saturday before the war began; we organized an independent demonstration, called “We want to live,” in response to the economic situation in Gaza, the Israeli blockade, the fact that there’s no work for anyone, and the Hamas government’s policies. The last time we protested like this, the police arrested young men who were involved and shot several people in the legs.

Now it doesn’t matter. The protest was canceled because the Israeli army attacked us; nobody dares go outside. The wars make the residents even weaker than they already were. People here are tired, they want change. Just so that we can live.

I don’t know how I’ll manage to go shopping for my children now. They’re saying that the war is against Islamic Jihad, but in practice they’re killing many civilians. I’m scared of going out to the supermarket. Just now, I heard that they bombed a civilian car that was driving on the road, killing children too. Sorry that what I’m saying is so scattered. The manager at the hospital scolded me for not coming into work. “You can’t leave the ward here alone,” he said, “we need at least one worker every day.” My colleague didn’t arrive because she was wounded by an Israeli bomb two days ago, and her children were lightly wounded too. They’re traumatized. How can I leave my own children?

There’s an ambulance siren outside right now. Nobody is wandering around on the streets, only ambulances. I hope they will let some fuel in, so that there will be electricity and water, and the blockade on us will end. That’s what I’m thinking about right now. That they will ease the blockade on Gaza. Because it’s impossible to live like this, in prison.

I often meet children in the ICU whose parents don’t have the money for a treatment that costs NIS 10. Mothers with cancer don’t come for treatment because they don’t even have the money for the bus fare. There are patients who need permits to go to Jerusalem for their treatment, but Israel refuses them entry. Why? There’s never a reason. They are simply denied, and that’s it. Because the army decided.

There’s no work for anyone because of the blockade. Young people try to study new languages online so that they can get a visa and go abroad. My niece is studying German. In the hospital ward there are a few who are studying Turkish. But it’s still impossible to leave this place. If they opened up Gaza, three quarters of the young people would run away. I dream about leaving, too. 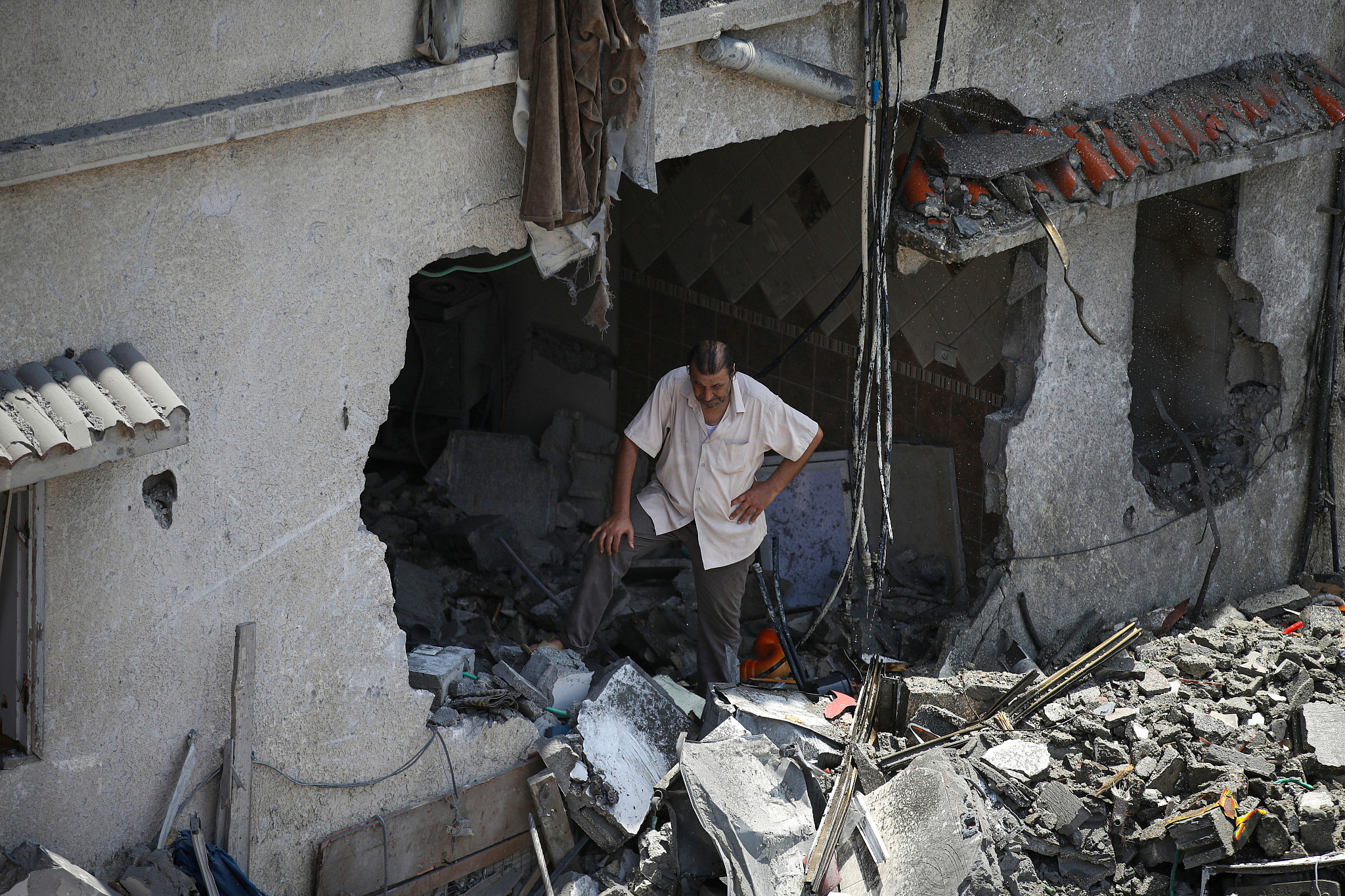 What do people here want? To live like the rest of the people in the world. To have basic rights. Without war. Without occupation. Without blockade. Many people want the government here to change, and want there to be a different, single Palestinian government that will unite us in Ramallah, and for us to have a state, without this split.

This war created another split, between Islamic Jihad and Hamas, because only the former took part in it, not the latter. It created tension between them. Hamas didn’t join in to protect people from the Israeli attack, because they knew it would escalate the war, and the public in Gaza doesn’t want another war. People are finished, and angry, and children are still traumatized from last year. My children, too. Our house was bombed in the previous war, and completely destroyed.

I long for a ceasefire. Listen, you can hear rockets now. Did you hear? That’s what it’s like, everywhere.

Ok, I need to be with the children. I’m sitting with them and hoping that if we die, it’ll be quick. It’s impossible to know where they will bomb.

Manal is a pseudonym for a Palestinian writer and resident of Gaza.