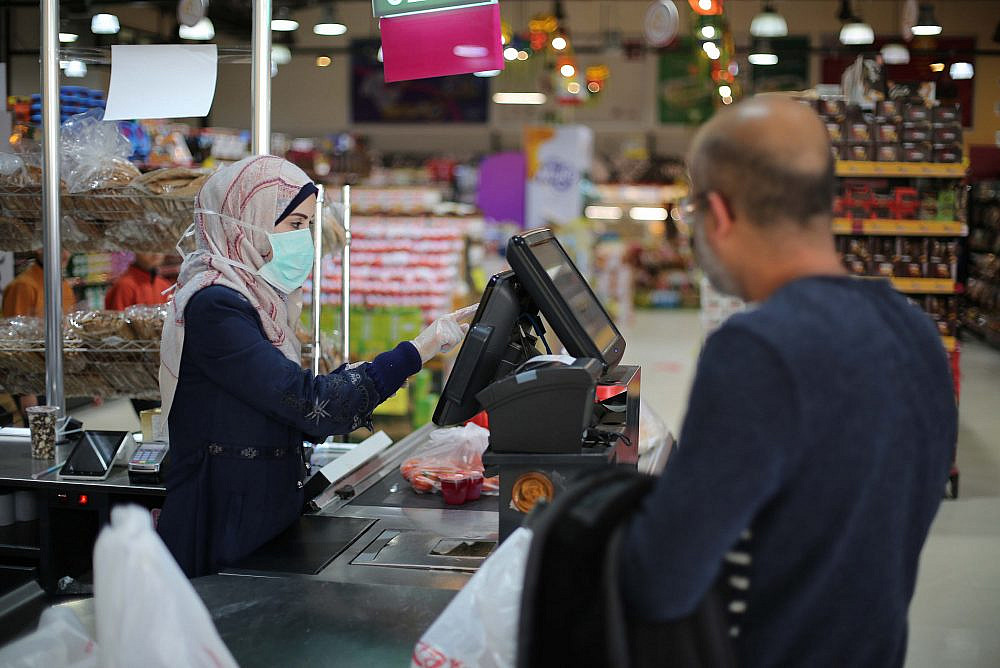 Palestinian workers wear face masks for fear of the coronavirus at a shop in Gaza City, March 9, 2020. (Ali Ahmed/Flash90)

Faisal Mousa, 50, is a Palestinian street vendor in Gaza. Suffering from a heart condition that has made him immunocompromised, he stopped going to work since March, when the novel coronavirus arrived at the strip. “If I get the virus, I may not survive,” he said.

But Mousa’s decision is coming at a price. “I can barely afford paying for food and medicine,” he said. “I’m responsible for my four sisters. Now, we are depending on financial assistance that we receive every three months from the Palestinian Social Development Ministry.” On some days, he added, he forces himself to go out and sell goods just so he can earn some money, but what he makes is hardly enough to buy bread.

For Palestinians in Gaza like Mousa, the coronavirus crisis has led to a steep deterioration in an already-low quality of life. And unfortunately, it is only expected to get worse.

To date, there are 61 reported cases of COVID-19 in Gaza; the death of a 77-year-old woman on Saturday became the strip’s first coronavirus-related fatality. While the spread of the virus currently appears to be relatively limited, the United Nations Office for the Coordination of Humanitarian Affairs (OCHA) has determined that the threat of the pandemic in Gaza — crippled by a 13-year Israeli blockade, repeated wars, an intra-Palestinian political divide, a debilitated health system, and a severe lack of resources — is still of serious concern.

Both the Palestinian government and local and international development organizations in the strip have adjusted their efforts to help contain the pandemic. But while actions such as raising awareness about the disease and distributing hygienic kits are important, they are only short-term measures. What the strip needs just as urgently, experts argue, is a recovery plan — one that can only be achieved successfully by lifting the Israeli siege.

The coronavirus has threatened the socioeconomic welfare of Gaza’s Palestinians as much as their health. An April 2020 economic update by the World Bank reported that 46 percent of people in the strip live below the poverty line. Measures to curb the spread of the virus have disrupted the Palestinian economy, it added, and the repercussions will be even more severe if the outbreak is not controlled. According to the Palestinian Central Bureau of Statistics, Gaza’s unemployment rate reached 52 percent in 2018, and was even higher for young people at 69 percent; those figures have likely risen since March.

The impact is already being felt. Anwar Fahmy, who owns a carwash, said he has lost more than NIS 10,000 ($2,845) since March. “I used to have 15 workers, but now they work in shifts. I used to pay each worker NIS 30 per day, now I pay them NIS 15 per day. My debt has increased, and affording the minimum operational costs has become so hard.”

According to a Palestinian Federation of Industries (PFI) report on the pandemic’s impact on industry in Gaza, 641 out of 1,865 factories have closed down, and 12,555 workers have lost their jobs since March. Six of the 11 sectors mentioned in the report are suffering great losses, including in construction, aluminum, metal and engineering, solar energy, lumber, and leather. 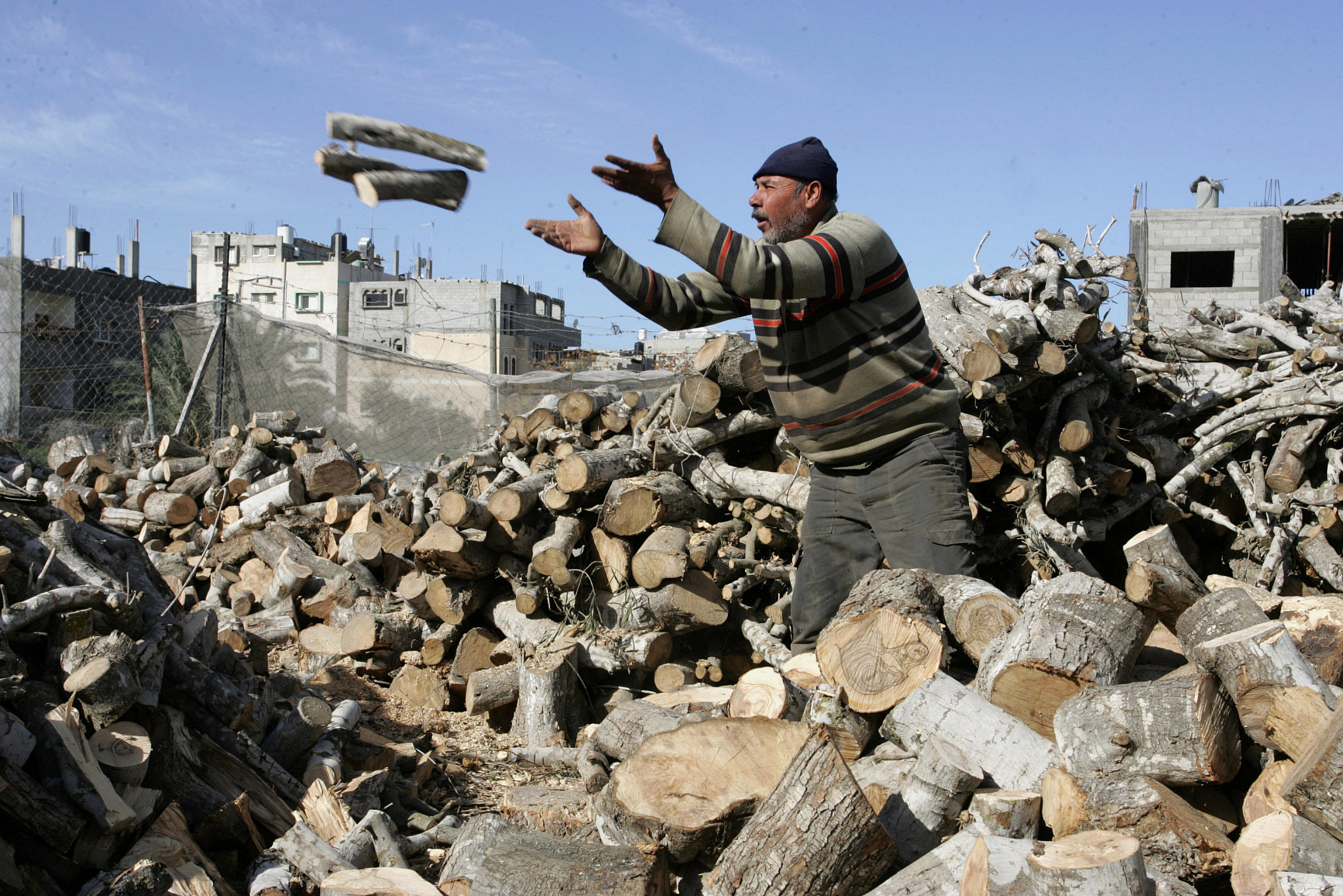 “The COVID-19 pandemic has overwhelmed Gaza’s economy,” said Mohamed al-Mansy, a board member of PFI. “For the past 13 years, the industrial sector has made a concerted effort to work within the difficult situation due to the imposed siege. Now, the internal and external closures due to the pandemic require urgent actions, to avoid further deterioration and save the Gaza Strip from dire poverty,” he added.

With very limited resources and high poverty and unemployment rates, it has become harder for Gaza’s residents to secure food during this time. For example, the Atfaluna Society for Deaf Children, where I work as a projects and fundraising officer, conducted a needs assessment to identify the socioeconomic effects of COVID-19 on families in Gaza. Of the 305 families interviewed, 94 percent said they suffered from food insecurity, and 75 percent reported that they can barely provide basic nutritional supplies for their families.

The study also found that psychological distress has increased due to the coronavirus crisis and the economic difficulties: 84 percent of families reported increased anxiety since the outbreak began, and 82 percent indicated that the crisis has negatively impacted their children’s mental health.

“The COVID-19 pandemic affects the whole globe and is a game changer,” said Naim Kabaj, the director of Atfaluna. With the international community busy mitigating the risks of the pandemic, he added, the priorities for donors who support development work in Palestine have changed. “Donations now are restricted to facing the risks of COVID-19, which caused many organizations to limit their services due to limited resources. This has dire consequences for the people living Gaza.”

Iman Rady, a speech therapist who graduated from the Community College of Applied Science and Technology 13 years ago, is one of those people. All the employment opportunities she received over the years were temporary, lasting between three to six months. In November 2019, Rady received a six-month contract job and planned to save her earnings to launch her own speech therapy center. But the project she was hired for was suspended by the donor.

“For the past 13 years, it has been difficult for me to find a job in light of the burdensome conditions in Gaza,” said Rady. “Upon signing this contract, I started building objectives for my career. But as usual, my dreams were hit by the dark reality in Gaza.”

Before you go…
A lot of work goes into creating articles like the one you just read. +972 Magazine is nonprofit journalism, owned by many of our writers, editors, and journalists. In order to safeguard that independent voice, we are proud to count you, our readers, as our most important supporters. With your support, we can keep +972 Magazine a strong, independent, and sustainable force helping push the global discourse on Israel/Palestine.
DONATE
More About Gaza 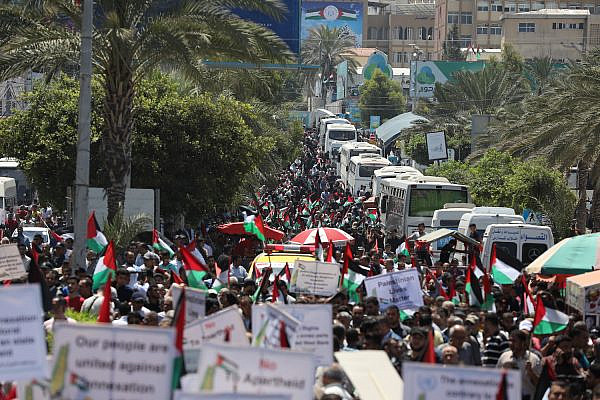 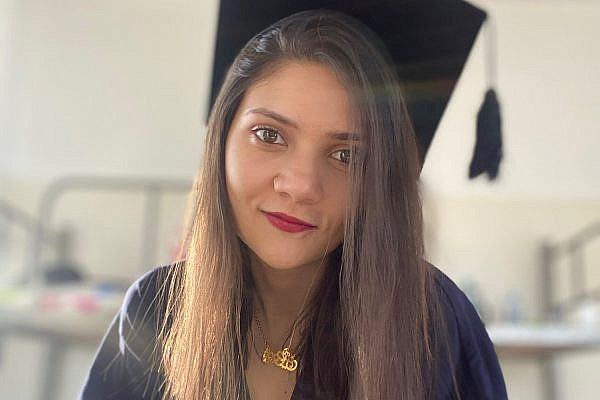