While an airport will not end the suffering in Gaza, it is an essential step to alleviate serious humanitarian concerns. Here’s how to do it. 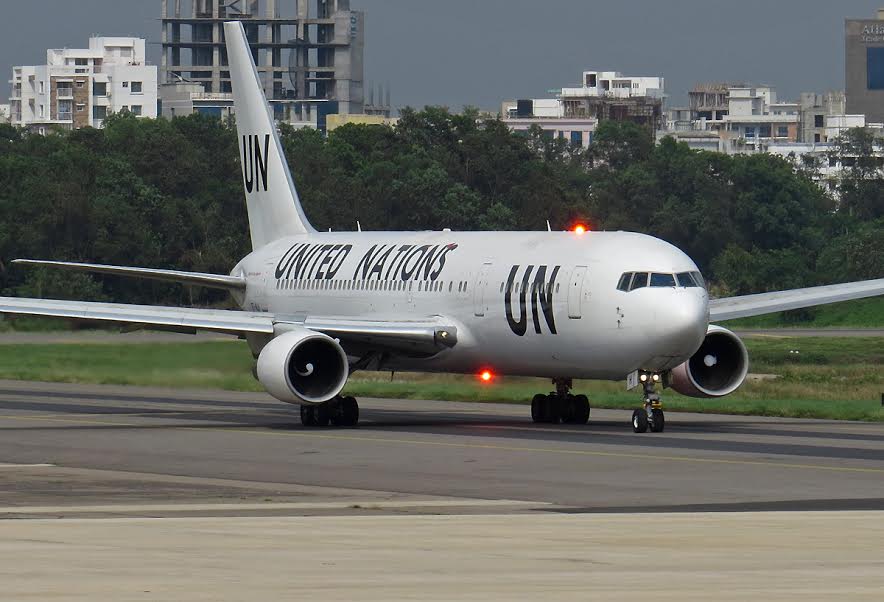 Recent wars, a crippling blockade, and poor governance have rendered Gaza an increasingly difficult place to live for its 1.8 million residents. Poverty, lack of access to food and other essential resources, and the inability to move freely create complex conditions of survival for those living in the coastal enclave. A recent World Bank report notes that Gaza has the world’s highest unemployment rate, and youth unemployment specifically is higher than 60 percent. At the present rate, the United Nations estimates that it would require “herculean efforts” for Gaza to remain inhabitable in the year 2020, and if the humanitarian situation is not addressed, the damage will be irreversible.

Ahmed Alkhatib, a Palestinian raised in Gaza City who currently lives in the San Francisco Bay Area, knows the struggle in Gaza all too well. He has a bold humanitarian proposal that will help alleviate the suffering of Gaza’s inhabitants: build an airport in Gaza to be operated and regulated by the United Nations. Building this airport is the mission of Project Unified Assistance (PUA), a new U.S.-based humanitarian nonprofit organization founded by Alkhatib to promote the freedom of movement for the people of Gaza.

Alkhatib left Gaza in 2005 as a high school student to participate in the Youth Exchange and Study program, which was established after the September 11th attacks to create cultural bridges between the Arab and Muslim worlds and the people of the United States. He was one of only ten students selected out of thousands of applicants to receive the prestigious scholarship to participate in the fledgling program. After completing his junior year at a high school in Pacifica, California, a small city just south of San Francisco, Ahmed attempted to return home to Gaza through Egypt. Due to violence and border closures, he was stranded in Egypt for three months, not knowing if, when, and how he would be able to return home. He was eventually awarded a scholarship from a private high school in San Francisco to complete his studies so he returned to the Bay Area, where he has lived ever since. 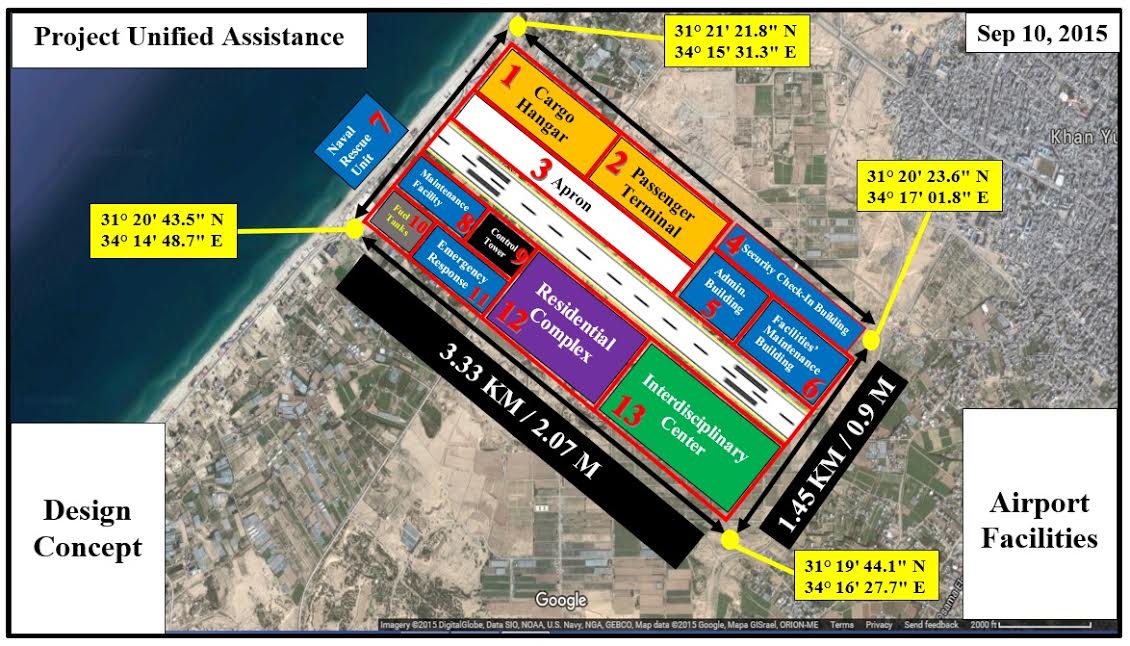 Design concept for the proposed airport in Gaza. (Courtesy of PUA)

In 2007, Ahmed applied for political asylum status at a time when very few Palestinians were receiving asylum, which was granted a year later and started him on a path towards citizenship. He became a U.S. citizen in 2014, making it possible for him to achieve certain personal goals, but he has not been able to return to Gaza ever since he left home as a high school junior a decade ago. Ahmed has not seen most of his family since then, and has only seen his parents once, in Egypt in 2012.

His idea to build a UN-regulated airport in Gaza stems from his personal experiences and struggles with the freedom of movement, his love of aviation, and the very real conditions his family and friends face in their everyday lives. The airport project, which Alkhatib insists is non-political, provides a functional approach to a chronic problem in Gaza. In Alkhatib’s own words, “It may seem unlikely that Israel would approve constructing an airport as a standalone project and would only accept it as part of a comprehensive peace deal. However, exploring options to construct an airport in a speedy, ad-hoc manner may be the best way to jump-start Gaza’s recovery. Such an approach could also pave the way for more concrete measures aimed at long-term stability by providing a lifeline” to Gaza’s residents. To this aim, Project Unified Assistance has two key practical, implementable, and strategic goals.

First, the airport would be operated and regulated by the United Nations in order to transport both humanitarian aid and commercial goods and passengers. This would establish a transportation corridor to get passengers in and out of Gaza, support humanitarian relief efforts, and dramatically improve economic conditions. The UN operated an airport in Gaza in the 1950s and 60s, giving this project important historic precedent. Furthermore, Project Unified Assistance is not attempting to rebuild the old Gaza airport, which was an unsuccessful endeavor due to its impractical location. It is instead an innovative formula in a new and more suitable location. Any attempt to revive the old airport is doomed to fail based on a total shift in Gaza’s conditions since it was destroyed in 2002. 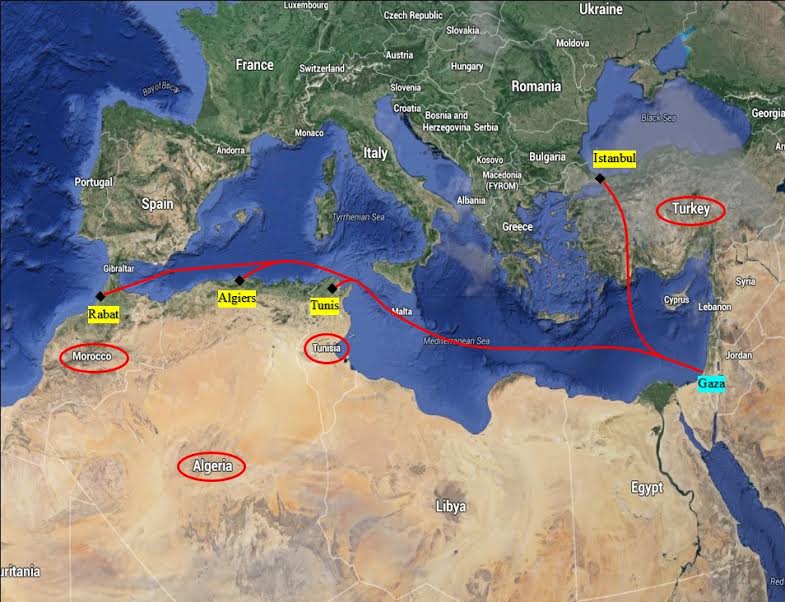 Proposed flight paths to connect Gaza with four countries on the Mediterranean. (Courtesy of PUA)

Second, it would be a strictly humanitarian endeavor to create an independent travel mechanism allowing Gaza residents to enter and exit the territory without using Egyptian and Israeli crossing points. Gaza’s future lies not in negotiated long-term ceasefires or final status negotiations but in the possibility of its residents to move without the permission and regulation of Egyptian and Israeli authorities and for goods to enter the territory in an efficiently regulated and continuous manner. An inhabitable Gaza must be connected to the outside world in a way that does not involve its two neighboring countries.

PUA proposes that UN flights should take passengers to four countries bordering the Mediterranean Sea from which passengers can board connecting flights to their final destination. Each flight path would avoid the airspaces of Israel, Egypt, and Gaza’s regional waters. The airport thus turns Gaza’s “geographic curse” of being trapped between Israel, Egypt, and the Mediterranean Sea into a strategic location that doesn’t threaten Israel’s security or lift its blockade and encourages the development of infrastructure and the economy in Gaza.

While an airport is not in itself a panacea to the suffering of Palestinians in Gaza and the revival of its choked economy, it is an essential step to alleviate serious humanitarian concerns. While Alkhatib knows that the odds against the humanitarian airport are seemingly insurmountable, he understands that only herculean efforts like the one being undertaken by Project Unified Assistance can lead to the basic human right of freedom of movement, which can ultimately lead to peace, justice, and stability in Alkhatib’s native homeland.

Oren Kroll-Zeldin is adjunct professor in the Swig Program for Jewish Studies and Social Justice at the University of San Francisco. He is also on the board of directors of Project Unified Assistance.