In Jabaliya sustained Israeli shelling has obliterated entire families, leaving them homeless and with few options to rebuild.

Scenes of destruction abound along Gaza’s eastern border. From its northern tip to the southern town of Rafah, entire blocks along this 25-mile-long strip have been flattened, displacing hundreds of thousands of Palestinians, overwhelming the makeshift shelters of the United Nations Relief and Works Agency, and threatening to delay the beginning of the school year here.

But for all the trauma felt by the newly displaced, residents of Gaza’s refugee camps have suffered an especially cruel fate since Israel began its ground and air invasion five weeks ago. Nowhere is that more pronounced than in Jabaliya, where sustained Israeli shelling has obliterated entire families, leaving them homeless and with few options to rebuild.

“UNRWA can only help people in its schools,” says 27-year-old Yusef Balata, who was just outside his home when Israeli shells killed all 11 family members inside, including five children. Balata and his cousins have returned to the scene everyday since the July 29 attack, picking through the rubble for reminders of the departed.

Ahmad Balata, 18, holds up a bib and tells me it belonged to his one-year-old cousin, whose body was buried in parts. Ahmad stands nearly seven feet tall but seems to shrink at the thought. He kneels down again and finds a birth certificate, a prescription, an immunization record – all bearing his cousin’s name. Ahmad Balata digs through the rubble to find reminders of his one-year-old cousin, whose body was buried in parts (photo: Samer Bedawi)

Home to more than 100,000 people, the Jabaliya refugee camp is Gaza’s largest. Most here hail from villages and towns that were either destroyed during Israel’s creation or “cleansed” of their Palestinian inhabitants and rebranded with Hebrew names. But ask anyone in this 1.4-square-kilometer space, and they can still name where their families’ homes used to be.

That’s no minor detail for a population that, like Gaza’s itself, is mostly below the age of 29 – and certainly too young to remember the Palestinians’ 1948 nakba, or catastrophe. Unlike that first generation of displaced, though, Jabaliya’s youth have known only this ramshackle life, where rows of concrete and corrugated steel are their only sense of shelter.

Now, even that is gone.

At the outset of Israel’s most recent ground invasion into Gaza, this refugee camp suffered some of the most devastating tank shelling, including a July 30 attack on a UN-run school that killed 19 people seeking shelter there. A day earlier, at least two tank shells fell on the Balata home, according to neighbors and family members who helped extract the dead from the rubble.

Alaa Balata, 17, remembers carrying his eight-year-old brother, Yahya, to Kamal Adwan Hospital. “I held him in a blanket,” Alaa says. “He was still breathing, but his intestines were falling out.” Yahya later died on the way to Gaza City’s Al Shifa Hospital, where doctors had hoped to sew his wounds. 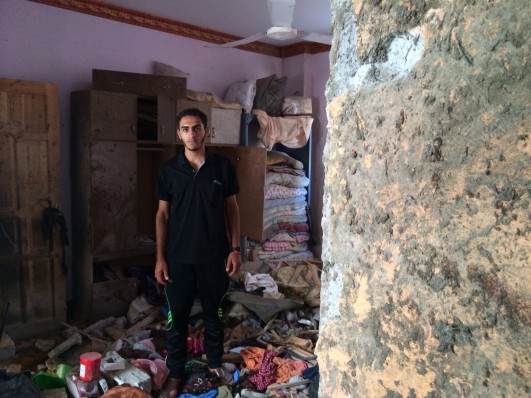 Alaa Balata is 17. On July 29, his entire family was killed by Israeli shelling (photo: Samer Bedawi)

When I met Alaa fewer than two weeks after the attack, he was with his uncle, who is taking care of Alaa now. Abdel Kareem, 51, told me about his daughter Hadeel, whom he had nicknamed “Delo.” She died in the July 29 attack, but her father still speaks about her in the present tense, telling me she “wants to be a doctor.” He points to writing on the wall: “See, she wrote this.” Hadeel was 17. Her father, who nicknamed her “Delo,” still speaks about her in the present tense, telling me “she wants to be a doctor.” She and 10 of her family members were killed by Israeli shelling on July 29, 2014 (photo: Samer Bedawi)

“I don’t understand why they hit us,” Abdel Kareem says. Like other victims of Israeli shelling, he described the falling artillery as “random” – a claim backed by military experts who say there is no way to predict where the shells will fall. Abdel Kareem told me that researchers from a human rights organization (he couldn’t recall the name but said they were “foreigners”) had visited the scene days earlier and said they were looking into war crimes charges.

That stands to reason: Random tank shelling into civilian areas is bad enough. Even more horrific is when tanks shell refugee camps.