Local residents tell me that previous Israeli attacks on Beit Hanoun had targeted homes much closer to the border. This time, the military took aim at the center of town. Why?

As negotiations over a long-term Gaza truce draw to a close in Cairo, their success may hinge on a key Hamas demand – facilitating civilian access to the West Bank. The demand, say observers here, is about more than humanitarian needs. Linking the two territories would strengthen a Palestinian reconciliation deal forged in April – a deal Israeli Prime Minister Benjamin Netanyahu has refused to recognize.

On the ground in Gaza there is little evidence that Netanyahu intends to accede to the Hamas pre-condition. Nowhere is that more plain than in Beit Hanoun, the Palestinian town at Gaza’s northeastern edge that is home to the only civilian passage out of the territory. The lone administrative building on the Palestinian side of the Erez crossing has been destroyed by an Israeli airstrike, and during a site visit there on August 6, the only incoming passenger was a foreign journalist. 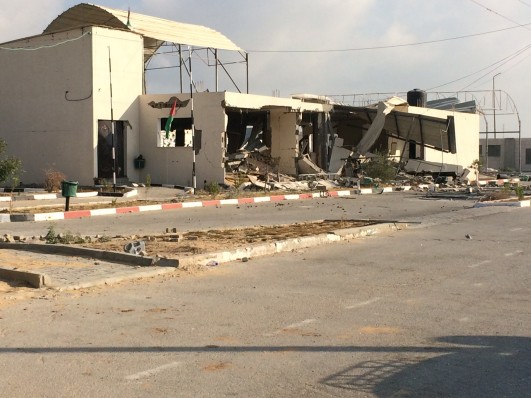 Erez: The lone administrative building on the Palestinian side of the Erez crossing has been destroyed by an Israeli airstrike (photo: Samer Badawi)

Nearby residents say the desolation is nothing new. Permission to exit through Erez falls to the Israeli Security Agency, and permits are limited to “humanitarian cases, with an emphasis on urgent medical” ones, according to the Israeli human rights organization Gisha.

What’s different after Israel’s latest military campaign here is that the areas surrounding Erez have themselves become no-go zones, pummeled by shelling and airstrikes that have displaced thousands and destroyed homes deep into the heart of Beit Hanoun.

A stone’s throw from the centrally located UN-run school shelled by Israel on July 24, killing at least 15 people seeking shelter there, 10-year-old Ahmad Kafarneh is camped out with his father, younger sister and cousin, across from a pile of rubble that used to be their home in Beit Hanoun. When I ask Ahmad where exactly his home was, he points to a wooden trunk shorn of bark, and tells me: “There, where the tree used to be.”

The scene is a familiar one all along Gaza’s eastern border, where the UN estimates that Israeli bombing has forced more than half a million Palestinians from their homes. In areas like Shejaiya and Khuza’a, though, the destruction is eerily “neat” – rows of homes, up to a kilometer deep, leveled to the ground or so badly damaged that they are uninhabitable. 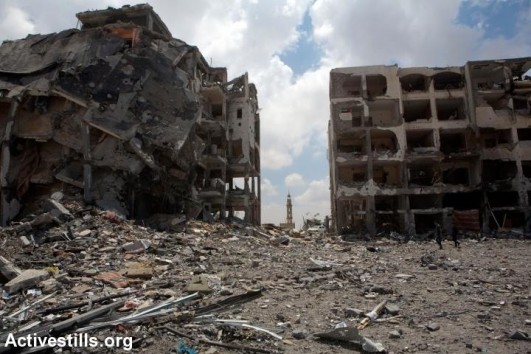 A mosque minaret rises among the ruins of Al-Nada towers after they were destroyed by Israeli strikes in Beit Hanoun, northern Gaza Strip, August 4, 2014. The towers had 90 flats. So far, Israeli attacks have killed at least 1,870 Palestinians, and injured 9,470 since the beginning of the Israeli offensive (photo: Activestills)

In Beit Hanoun the damage extends much further. Local residents tell me that previous Israeli attacks had targeted homes much closer to the border, but this time the military took aim at homes and facilities at the center of town.

The UN school-turned-shelter was one of them. Not far from its location, 18-month-old Muhammad Wahdan was badly burned by the blast of an Israeli airstrike that killed his mother and father and injured his two other brothers, Omar and Mus’ab. The three share a room in the pediatric ward of Gaza City’s Al Shifa Hospital, surrounded by surviving relatives who spoke of relentless bombing at the outset of Israel’s military campaign a month ago. 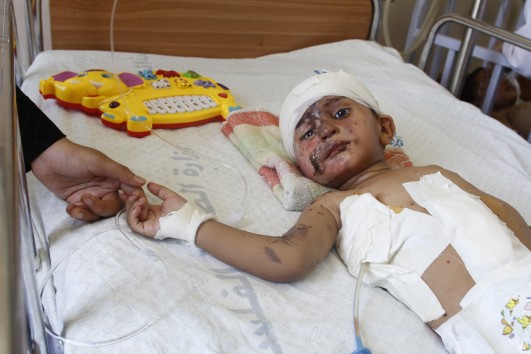 Eighteen-month-old Muhammad Wahdan was badly burned by the blast of an Israeli airstrike that killed his mother and father, and injured his two brothers, Omar and Mus’ab (photo: Samer Badawi)

“The thing about Beit Hanoun,” said one visitor at Al Shifa, “is that it’s exposed from the east and the north” – a reference to Israel’s ability to station tanks along its western and southern borders near the Gaza town. (I saw as much while entering Gaza myself on July 31: Dozens of tanks filed in and out of the northern tip, and entering reporters could hear near-constant shelling from multiple directions.)

If there was a military rationale for the bombing along Gaza’s eastern border, it’s unclear how it would apply to Beit Hanoun. Israel has justified its actions in the hardest-hit Palestinian towns, like Shejaiya and Khuza’a, by claiming that Hamas tunnels ran underneath their eastern-most neighborhoods – a claim undercut by the military’s repeated shelling of central Gaza. A more likely explanation is that the destruction in Beit Hanoun is aimed at further eroding Gazans’ access to Erez and, through it, the West Bank and Israel. That the majority of Gaza’s population traces its roots to towns and villages largely depopulated by Israel in the run-up to its creation, only adds insult to injury.

For now, Gaza’s Palestinians continue to pay a heavy price for their aspirations. As Erez lies in ruins, more than 1,800 Palestinians have been killed in Israel’s latest military campaign, some 10,000 injured, and a further half a million displaced from their homes. If the destruction in Beit Hanoun is any marker, their suffering has only just begun.