More than seven years of Israeli siege, a punishment for voting Hamas into power, have led Palestinians to rally around the party. After all, every time they look to Mahmoud Abbas for salvation, they are sorely disappointed.

GAZA CITY – With Operation Protective Edge becoming longer and more violent, questions over the attitude of the 1.8 million residents of Gaza toward Hamas are coming to the fore. Although both the international and Israeli media are concerned about Gazans, they are noticeably more critical of Hamas than they are of Israel. That concern is understood, but needs to be made clearer.

What ought to be clear for everyone following the events from a distance is that Palestinians have enough awareness to differentiate between Hamas as a government and Hamas as a resistance faction. It is true that Gazans have multiple attitudes toward the Hamas government. However, resistance is something Palestinians agree on almost unanimously. More importantly, people know that resistance is not only coming from Hamas.

One of the main accusations leveled at Hamas, especially from Israeli journalists and analysts, is that it uses building materials for constructing tunnels, rather than letting people use them for housing or supporting our civilian infrastructure. It is true that Gaza is an impoverished enclave that requires huge efforts and funds to develop. However, that does not lessen the importance of security. Like any other country in the world, Gaza has the right to self defense. It is well-known that Israel spends a lot of money on enhancing its military infrastructure, while neglecting poor neighborhoods and slums across the country. America, which has the most powerful military in the world, has more than 600,000 homeless people.

Another accusation, and one no less important, is that Hamas uses its citizens as human shields. But can Hamas really do so when the Israeli army intentionally targets civilian compounds? If the fact that civilians are near a military location doesn’t stop Israel from firing rockets towards them, what is the point of Hamas “hiding behind civilians?” Besides, Gaza is a very densely populated area, meaning that any military action will always take place close to civilians.

Hamas is also accused of firing rockets at Israeli civilians. This is a valid accusation and no one can deny it. But if one compares the number of causalities among Israelis, almost all of whom were soldiers, it becomes clear that civilians are not Hamas’ main targets.

Furthermore, Hamas is being blamed for its rejecting most of the ceasefire initiatives during the ongoing conflict. Palestinians see it differently; they are fed up with the stringent blockade being imposed on them for the past seven years. Borders are often closed to both individuals trying to exit the Strip, as well as goods entering entering it. People say they have been slowly dying this entire time; now, after more than 2,000 been killed, they refuse to accept their slow death. This is the reason that Hamas is rejecting any truce that doesn’t, at the very least, lift the blockade.

One more important factor that leads the majority of the population to support the resistance is the huge disappointment Palestinians constantly feel from the President Mahmoud Abbas. Whenever they have any sort of expectations from their president, they are always sorely let down by his collaboration with Israel’s occupation. In Gaza, Hamas and the rest of the armed factions are still defending the population with their lives, so it is no wonder that the popularity of Hamas increases as that of Abbas decreases.

In these sensitive times of war, Gazans know that they better support the home front and confront Israel, rather than become split over their leadership and lose the battle. Moreover, the large number of people being killed creates unity among the public, which has led Palestinians that to hold the same set of demands. 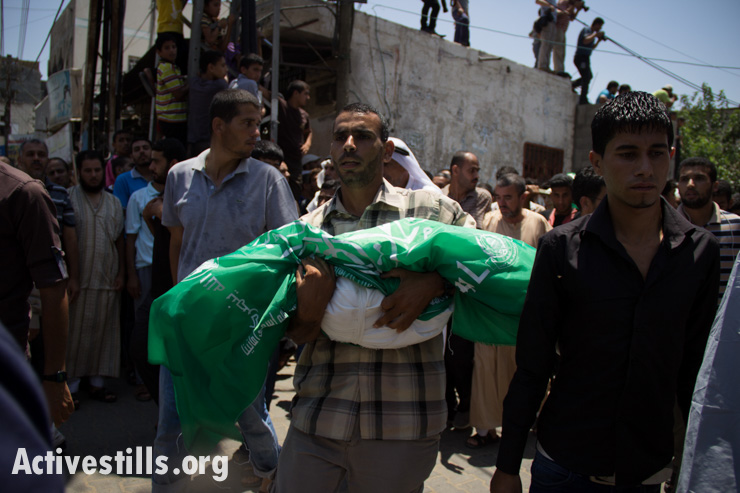 A mourner carries the body of a child among 24 members of the Abu Jamea family, who were killed the previous day during an Israeli attack over the Bani Suhaila neighborhood of Khan Younis, Gaza Strip.

More than seven years of being under Israeli siege, a punishment for voting for Hamas, have led people to rally around the party. Hamas was boycotted widely by international community, as well as many regimes in the Arab world. However, Palestinians now understand that Hamas, despite the disadvantages, managed to survive the battle.

Today, Palestinians will not accept anything less than the lifting of the siege and the building of an international port. Gazans are still convinced that having a port is not a fantasy, especially, with the humiliation they must encounter while travelling through the Egyptian border.

Abeer Ayyoub studied English literature at the Islamic University of Gaza. She is a journalist who covered the last war on Gaza and has recently covered various internal issues. She has written pieces online in English for Al Jazeera, Haaretz and other publications.

Related:
‘Ending the siege is not a Hamas demand – it is a Palestinian one’
Netanyahu is talking to Hamas. It’s about time
Photos of the week: Gazans search for normalcy among the ruins