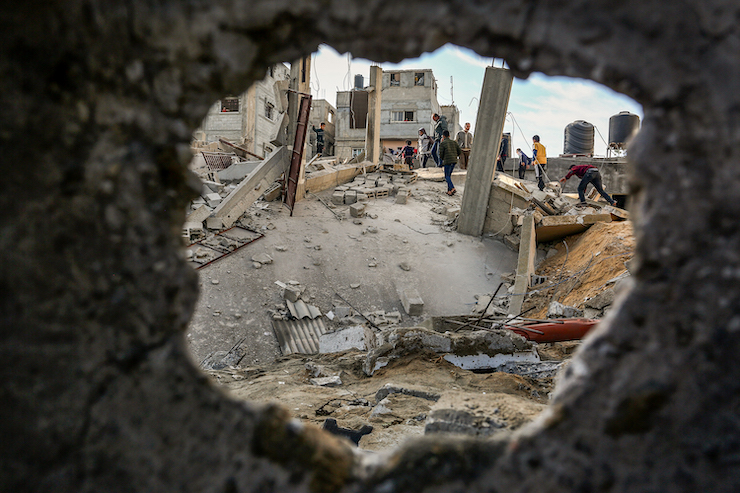 Israel killed 13 Palestinian civilians who weren’t involved in hostilities or affiliated with militant groups in its latest military campaign in Gaza, according to a new report by B’Tselem released Wednesday. Two of the casualties were children and three were women, one of whom was heavily pregnant. “These deaths are the foreseeable outcome of Israel’s unlawful, immoral policy of bombing homes in Gaza,” determined B’Tselem.

Based on B’Tselem’s investigation, from May 3 to May 6, Israel launched airstrikes and fired shells at more than 350 targets in Gaza, wounding 153 people. The rights group also found that none of the strikes “were preceded by any suitable warnings that might have given the inhabitants the opportunity to seek shelter or save their belongings.”

During this time, the militant groups associated with Hamas and Islamic Jihad fired some 700 rockets to Israel, killing three and wounding 123. A rocket fired by Islamic Jihad operatives struck a home in Gaza and killed a pregnant woman and her one-year-old niece, and an anti-tank missile fired by these groups killed another Israeli civilian. “This targeting of the civilian population in Israel is unlawful and immoral,” according to the report.

As in previous attacks, Israel again targeted residential and office buildings, the report found. According to the United Nations, a total of 33 housing units were destroyed and 19 more were severely damaged, leaving 52 families — 327 Palestinians, including 65 are children — without shelter. Hundreds more housing units sustained partial damage.

B’Tselem emphasized that firing at residential structures in densely populated areas like the Gaza Strip “inevitably involves serious risk of harm to civilians. The danger is not hypothetical: in recent years Israel has already killed thousands of civilians, including hundreds of children, in airstrikes on their homes.” In Operation Protective Edge in 2014 alone, Israel killed at least 1,055 Palestinians — including 405 children and 229 women — who did not take part in the hostilities.

The report also highlighted how these strikes are not a result of rogue combatants transgressing military orders, but in fact “part of a policy formulated by government officials and the senior military command.” The attacks “had the support of the MAG Corps, which issued legal opinions backing the policy.”

Israel has justified these attacks by arguing that they conform to international humanitarian law, the report continues, but “this interpretation is unreasonable, legally flawed, and based on a morally warped worldview. It must be rejected out of hand.”

In a separate report also released on Wednesday, a Human Rights Watch investigation into the May escalation reaffirmed B’Tselem’s findings: “Four Israeli airstrikes struck targets that appeared to contain no military objective or may have caused disproportionate civilian loss in violation of the laws of war.” HRW also stated that, since rockets fired by Palestinian armed groups cannot target a particular military objective, their use in civilian areas is “inherently indiscriminate in violation of the laws of war.

Both reports include testimonies from survivors of or witnesses to the attacks. A missile fired at the al-Madhun family home in al-‘Atatrah neighborhood of western Beit Lahiya in Gaza killed four people: ‘Abd a-Rahim al-Madhun, 60; his son, ‘Abdallah al-Madhun, 21, an Islamic Jihad military branch operative; his daughter-in-law, Amani al-Madhun, 36, a mother of four who was nine months pregnant; and their neighbor, Fadi Badran, 33. The attack also left six children wounded.

Muhammad al-Madhun, ‘Abd a-Rahim’s son, who was at home at the time of the bombing, told B’Tselem: “I got home at 2:30 P.M. My wife and kids had gone to sleep, because we figured we wouldn’t be able to get any sleep at night, given the escalation and the bombardments. I went to sleep next to them.”

“I got up at 5:00 P.M. and sat in the living room having coffee with my cousin and a neighbor. I went to the kitchen to make coffee for my neighbor and when I got back, I suddenly heard a loud explosion in the house. It was very loud, but at first I thought it was from something that had happened outside. It took me a moment to realize it was inside the house. I understood when I saw bits of glass, metal, stones, sand, and dust and smoke all around me. I stood there in shock and couldn’t move. I just stood there and heard the debris and wreckage crashing down around me.”

“I called out to the neighbors and asked them to get the wounded people – my wife and two of my children – out from under the debris. My neighbor Muhammad al-Far came out from the wreckage and walked towards the street carrying my two-and-a-half-year-old daughter Fatimah. I heard her screaming and whimpering in pain.”

Muhammad’s father died of his wounds at al-Shifa Hospital later that day. 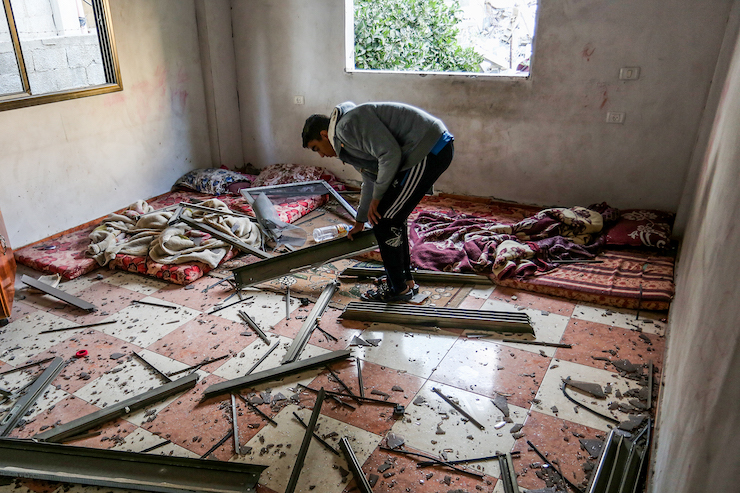 In another attack, two missiles struck the top floor of a five-story building, also in Beit Lahiya. The strike killed six people from two families, including a 3-month-old child.

Mohammad Abu al-Jidyan, 26, lost both his parents in that strike. He was on his way home when his father called to ask that he hurry back because of the strikes launched on Gaza. “About five minutes after my father called, I reached the gate and entered the building. At that very moment, the apartment I live in with my parents was bombed,” al-Jidyan told B’Tselem.

“I ran up the stairs to see what had happened. I saw all the neighbors running down and was afraid my family had been killed. No one heard me. There’s a vacant apartment on the fourth floor. When I got there, I saw that the fifth floor, where my parents, my brother ‘Abd a-Rahman and I lived, had caved in and collapsed onto the fourth. Because everything was in such a state, I was sure that my parents and my brother had fallen as martyrs.”

“My two sisters and I lost our whole family – our father, our mother and our brother – with no warning and without a chance to say goodbye. The strike was so brutal that we didn’t even find their bodies in one piece. When we buried our parents, my little brother’s body was laid in the same grave with my mother. He was born after ten years of trying to conceive…I feel alone in the world, without my parents and without our home, which was completely destroyed. I hope I find the strength to deal with what happened to us.”

The easements in the blockade on Gaza that Israel agreed to implement in the last round of negotiations have yet to be fully implemented, and given that protests at the border-fence are scheduled to resume on Friday, it is likely only a matter of time before there is another “escalation” in hostilities. As such, it is wise for Israelis to recognize the heavy price Palestinians in the Gaza Strip pay even during periods of “calm,” as they endure unlivable conditions of life under blockade.