As the Gaza Strip goes into renewed coronavirus lockdown, five Israel-based human rights organizations petitioned the High Court of Justice on Sunday to demand the Israeli government open the Kerem Shalom crossing to fuel and other goods.

Kerem Shalom is the central commercial crossing between Gaza and Israel. Israel closed the crossing to all but essential humanitarian aid earlier this month after incendiary balloons were launched from the strip into southern Israel in early August, leading to hundreds of fires in the area. Israel has carried out retaliatory airstrikes across the besieged strip almost every night since the balloon launches began.

According to Hamas, the balloon launches are intended to send a message to Israel and the international community that Gaza is fed up with the absence of progress toward improving conditions in the territory.

All this is happening as Gaza officials put the strip under lockdown to stem the rising tide of COVID-19 infections. According to the Gaza Health Ministry, the number of infected people had risen to 182, leading officials to declare a state of emergency.

“It is precisely during this period of the spread of the coronavirus in which there are clear signs in the Gaza Strip of a deepening of the severe economic and humanitarian crisis,” reads the petition written by Gisha, Adalah, HaMoked, the Association for Civil Rights in Israel, and Physicians for Human Rights-Israel. The groups further criticized the Israeli government for choosing to take “additional steps aimed at directly harming the civilian population while knowing full well the significance of their decision and the ramifications on the residents of Gaza.”

Beginning on Aug. 11, Israel banned the entry of building materials into Gaza through Kerem Shalom. On Aug. 13, it began blocking the entry of fuel, as a result of which the only power plant in the strip — which regularly provides about a third of the electricity available to residents — ceased working on Aug. 18. Gazans now have around four hours of electricity a day. 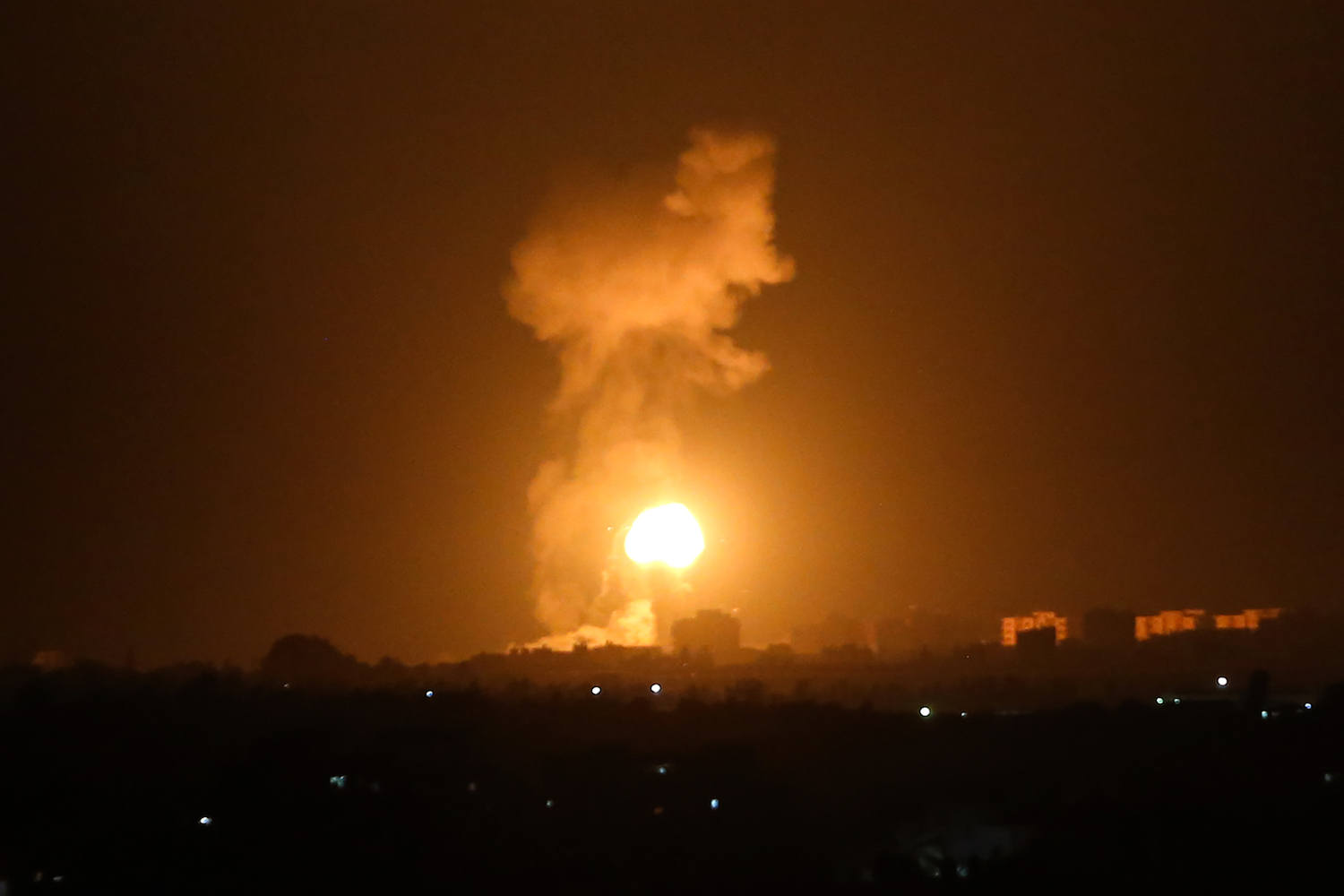 A ball of fire and smoke rises during Israeli airstrikes in Khan Younis in the southern Gaza Strip, August 16, 2020. (Abed Rahim Khatib/Flash90)

Israel has enforced a full maritime closure on Gaza since Aug. 16, and on Aug. 23 it began preventing the entry of goods through the Kerem Shalom crossing except for food and medicine. According to the petitioners, these measures — and in particular the blocking of access to fuel — has seriously undermined the vital needs of the civilian population in the Gaza Strip and further burdened its already crumbling economy and health system.

Restriction of fuel deliveries was regularly used during 2018 and 2019 Great March of Return protests as a means to quash the demonstrations.

The petition includes a number of affidavits that show the depth of the harm caused to civilians in Gaza following Kerem Shalom’s closure. A pediatrician at Shifa Hospital in Gaza City warns of high levels of infant mortality should respirators, infusion pumps, and other critical equipment cease being operated. An affidavit by a senior employee of the Coastal Municipalities Water Utility states that as long Israel continues to prevent the entry of fuel, all water facilities are expected to be shut down, including sewage pumping stations — which will lead to flooding and discharging untreated sewage into the sea, while harming the environment and public health. 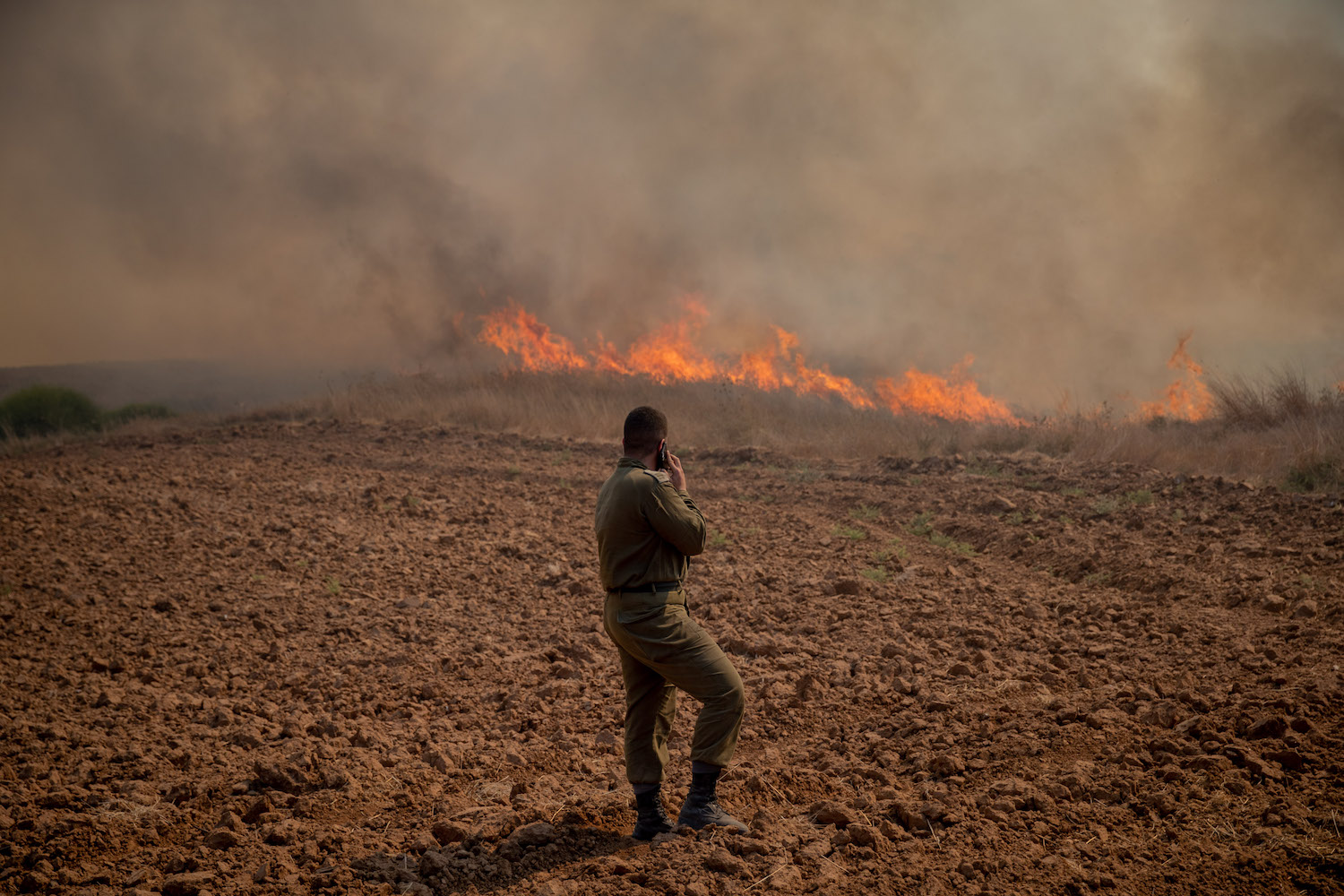 An Israeli soldier gazes at a fire near Kibbutz Be’eri, caused by incendiary kites launched by Palestinians from the Gaza Strip, August 13, 2020. (Yonatan Sindel/Flash90)

It is clear from statements to the media put out by the IDF Coordinator of Government Activities in the Territories (COGAT), which oversees Israeli policy in the West Bank and Gaza Strip, that the closing of the crossing is a form of collective punishment. On Aug. 10, COGAT wrote on its Arabic Facebook page:

“In light of the damage to the security lull in the Gaza Strip, it was decided to close the Kerem Shalom crossing immediately, with the exception of goods destined for vital humanitarian cases and fuel.” According to COGAT, the closure of the crossing would “affect, first and foremost, the residents of the Gaza Strip, the economy and the efforts to improve the living conditions of the citizens of the Gaza Strip.”

The following day, Israel issued yet another directive: it reduced Gaza’s fishing zone in Gaza from 15 to eight nautical miles. Four days later, the government ordered the complete closure of the sea, denying Gazans the right to enter the Mediterranean. On Aug. 13, COGAT announced that fuel would no longer be allowed into the strip. These sanctions, the petition alleges, “violate international law and the ruling of the Supreme Court, and ignore Israel’s duty to maintain the health of the lives of two million residents and protect their rights.” According to Adv. Muna Haddad of Gisha, while Israel itself admits that Gaza’s civilian population is not to blame for what is happening, it also knows that this population will be the first to be harmed in its ability to lead a normal life at a time when the Gaza economy is deteriorating because of the coronavirus. “This punitive policy has been implemented for a long time, and we can see its dire consequences on the ability of hospitals to function, for example,” says Haddad.

“The residents of the strip are under a kind of coronavirus curfew, with almost no electricity during the hottest days of the year, while people are in quarantine. These are residents who have no part in what Israel is trying to prevent. It is a cruel and inhumane step to exploit the seriousness of the coronavirus and the unbearable heat.”