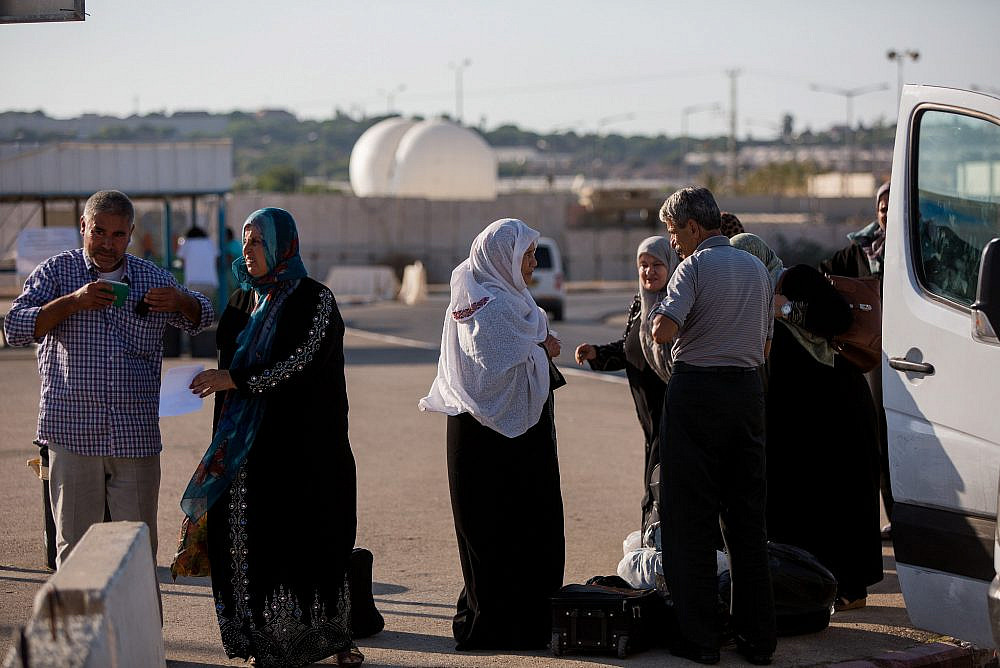 Palestinians arrive to cross into Gaza at the Erez Crossing between Israel and Gaza on September 3, 2015. (Yonatan Sindel/Flash90)

Mohammed, 36, suffers from an aggressive brain tumor with little prospects of long-term survival. A Palestinian living in the Gaza Strip, he applied three times for an Israeli medical permit to leave the blockaded territory and travel to Augusta Victoria Hospital in occupied East Jerusalem — the only Palestinian hospital with a radiation therapy unit — to receive desperately needed treatment that could lengthen his life.

Mohammed’s first two requests were denied: one of the rejection notices cited supposed “security concerns,” and the response to his other request was delayed. Finally, Augusta Victoria was able to obtain for him a two-day travel permit on June 11. A permit for his travel companion — Mohammed was by then severely incapacitated and unable to travel alone — was initially not approved.

Another Palestinian from Gaza, Waseem, 25, was born with a congenital heart problem. Medical treatments during his childhood allowed him to live a fairly normal life, including studying and graduating from Gaza’s Al-Azhar University with a degree in business administration in 2018.

That same year, however, Waseem began experiencing symptoms again. He underwent surgery at Al-Makassed Hospital in East Jerusalem, but has suffered from numerous complications since then. In April, doctors at Gaza’s Shifa Hospital urgently referred him to Al-Makassed for further surgery.

After waiting two months for a permit, Waseem was finally able to leave Gaza for Jerusalem; he will likely require open heart surgery to change a pulmonary valve in the coming months. Still in quarantine upon his return to Gaza due to COVID-19 regulations, Waseem is slowly recovering from his most recent treatment. But he is already starting to feel the stress as he prepares to endure the uncertain permit process yet again in order to receive the additional help needed to save his life. 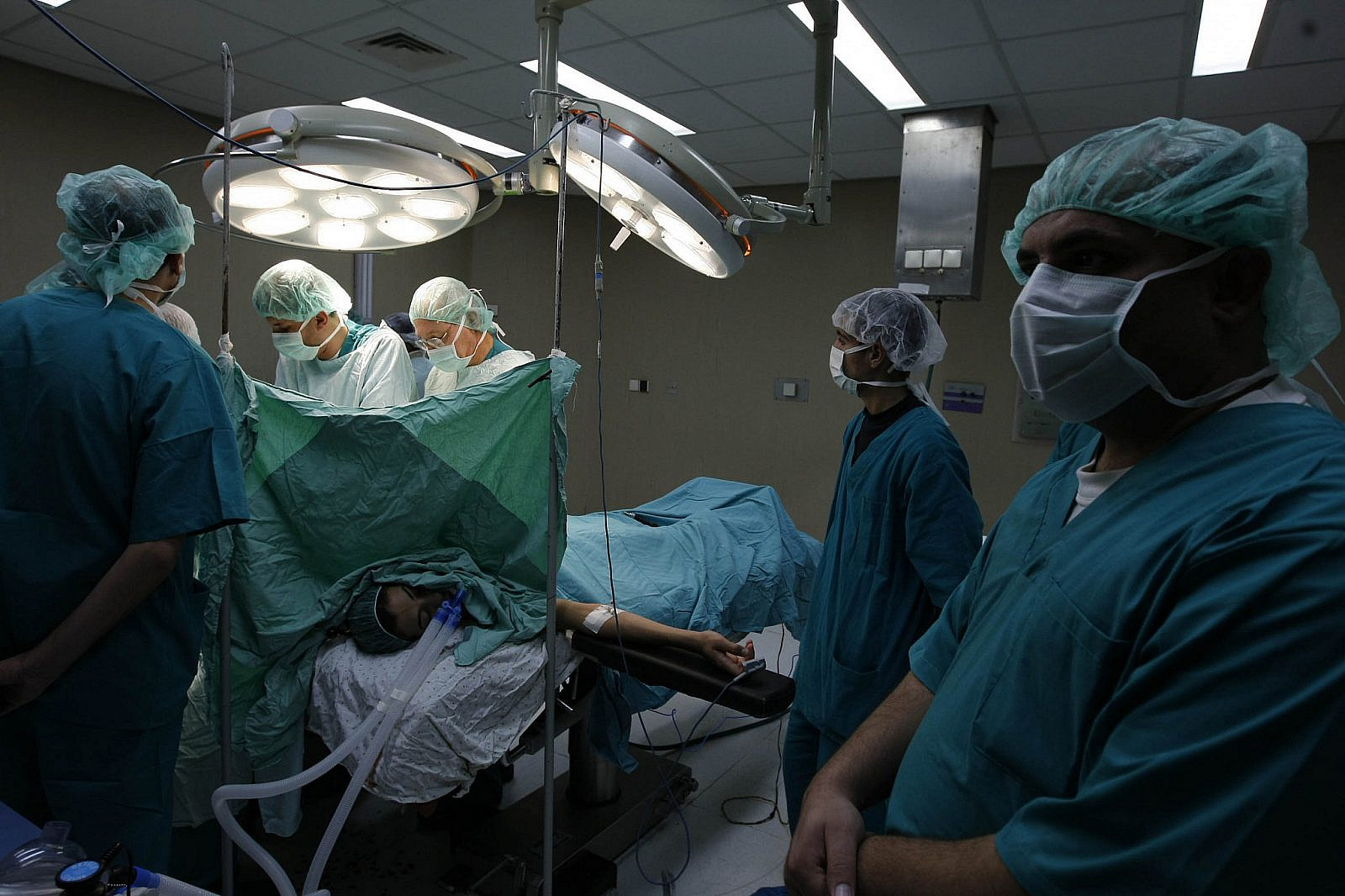 French surgeon Christopher Bulstrode operates on a Palestinian patient as he trains Palestinian doctors in surgical procedures at the Nasser hospital in Khan Younis in the southern Gaza Strip, December 15, 2009. (Abed Rahim Khatib/Flash90)

Mohammed and Waseem are but two out of thousands of Palestinian residents of Gaza who, in order to seek medical care unavailable in the blockaded strip, must engage with an Israeli permit regime simply to leave Gaza for treatment. Patients are often referred to Palestinian hospitals in East Jerusalem or the West Bank, with some referred to Jordanian, Egyptian, and Israeli hospitals as well.

According to the World Health Organization, over 2,000 permit applications are usually submitted each month on behalf of medical patients to exit Gaza, around a third of whom are cancer patients. From January to May 2020, 33 percent of those applications were rejected.

The Israeli permit regime has always been an arduous bureaucracy to navigate, with human rights groups long charging that the labyrinthine system and arbitrary decisions violate the right to freedom of movement of Gaza residents. These problems have become even worse after the Palestinian Authority halted its cooperation with Israel on May 21, in response to the Netanyahu government’s threat to begin annexing parts of the West Bank in July.

Under the Oslo Accords, the PA was made responsible for providing healthcare to what is today five million Palestinians in the West Bank and Gaza Strip. But while the PA issues referrals and pays a significant amount of the treatment for patients in its hospitals, the procedures are still contingent upon receiving travel permits from Israel, including for patient companions and coordinating ambulances at crossings.

Israel’s blockade of the strip, which began in 2007, successive wars, and the Fatah-Hamas split that has effectively created two separate governments in the West Bank and Gaza, has further fragmented the Palestinian healthcare system. All the while, Gaza patients still need to acquire Israeli permits to access advanced medical treatment such as CTs, PET scans, and radiation therapy at East Jerusalem hospitals.

Israel’s “dual use” list also prohibits the importing of certain materials into Gaza, including essential medicines, supplies, and equipment under the pretext that they could be used for military purposes. The absence of these items because of the list has further led to a lack of proper maintenance of medical equipment such as nuclear scanning technology, as well as a lack of materials used for prosthetic limbs. 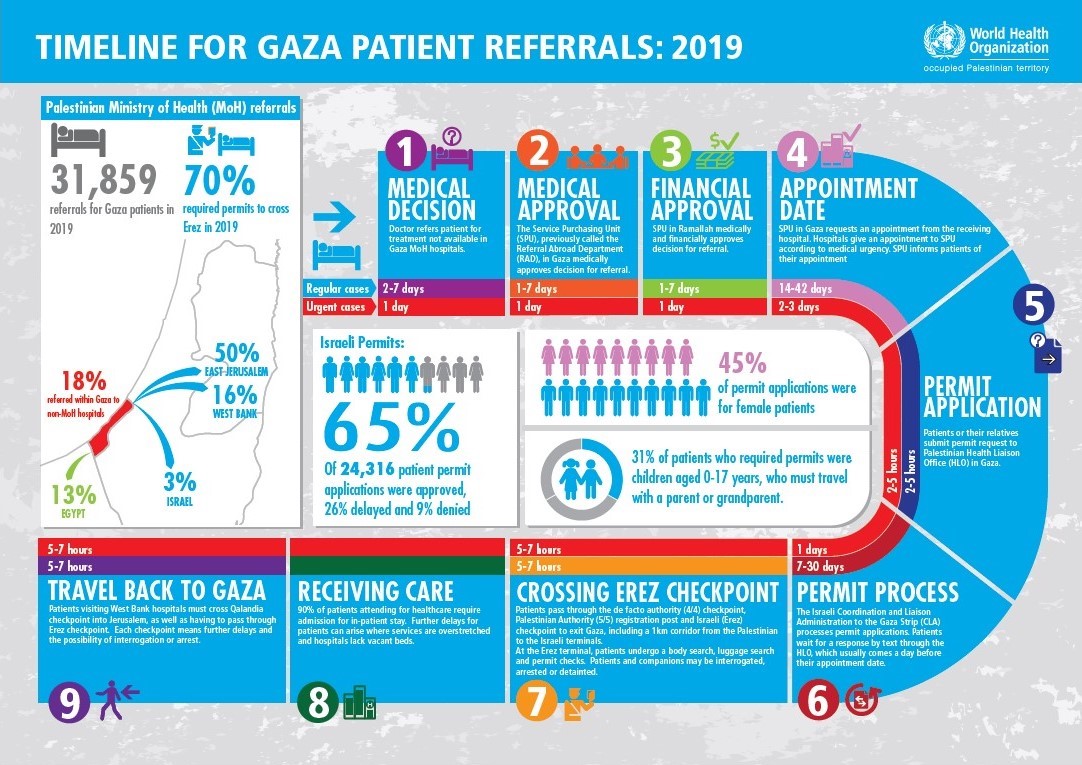 Infographic illustrating the process and timeline for Palestinian patients in the Gaza Strip to receive medical referrals and permits. (Courtesy of the World Health Organization)

In lieu of the PA’s decision to halt cooperation with Israel in May, the Palestinian Civil Affairs Committee has suspended the processing and coordination of all permits to the Israeli authorities. The new movement restrictions aimed at curbing the spread of COVID-19 have also compounded the obstacles for patients seeking medical help.

The results have at times been fatal: two infants from Gaza, Anwar Muhammad Harb and Omar Ahmad Yaghi, died in late June after their applications for emergency medical treatment in East Jerusalem hospitals were delayed by the permit system.

In addition, some Gaza residents who had left for medical treatment and family visits just prior to the PA’s suspension of coordination have been stuck outside of the strip unable to return home, because they do not have a travel permit allowing them back into Gaza.

‘The root of the problem is Israeli control’

Palestinians in the West Bank are currently still able to apply directly to the Coordinator of Government Activities in the Territories (COGAT), the unit of the Israeli Defense Ministry charged with administering the military occupation of the Palestinian territories, for travel permits to receive medical treatment in East Jerusalem hospitals. Most Palestinians in Gaza, however, have had virtually no way of submitting applications for months.

COGAT has made available an online form to apply for a travel permit, but it is still unclear how the request and acceptance processes will work. In response to a request for comment from +972, COGAT stated: “As a matter of policy, COGAT continues to enable residents of the Gaza Strip to enter even now for the purpose of life-saving medical treatments and for other humanitarian reasons. We emphasize that Erez Crossing is ready and equipped for enabling their passage.”

“The Palestinian Civil Affairs Committee has always only been the postman — they have not had the power to decide who can cross the border to get treatment,” said Ghada Majadle, director of the occupied territories department at Physicians for Human Rights-Israel. “The root of the problem is Israeli control of the borders between the two Palestinian (areas) and the permit regime.” 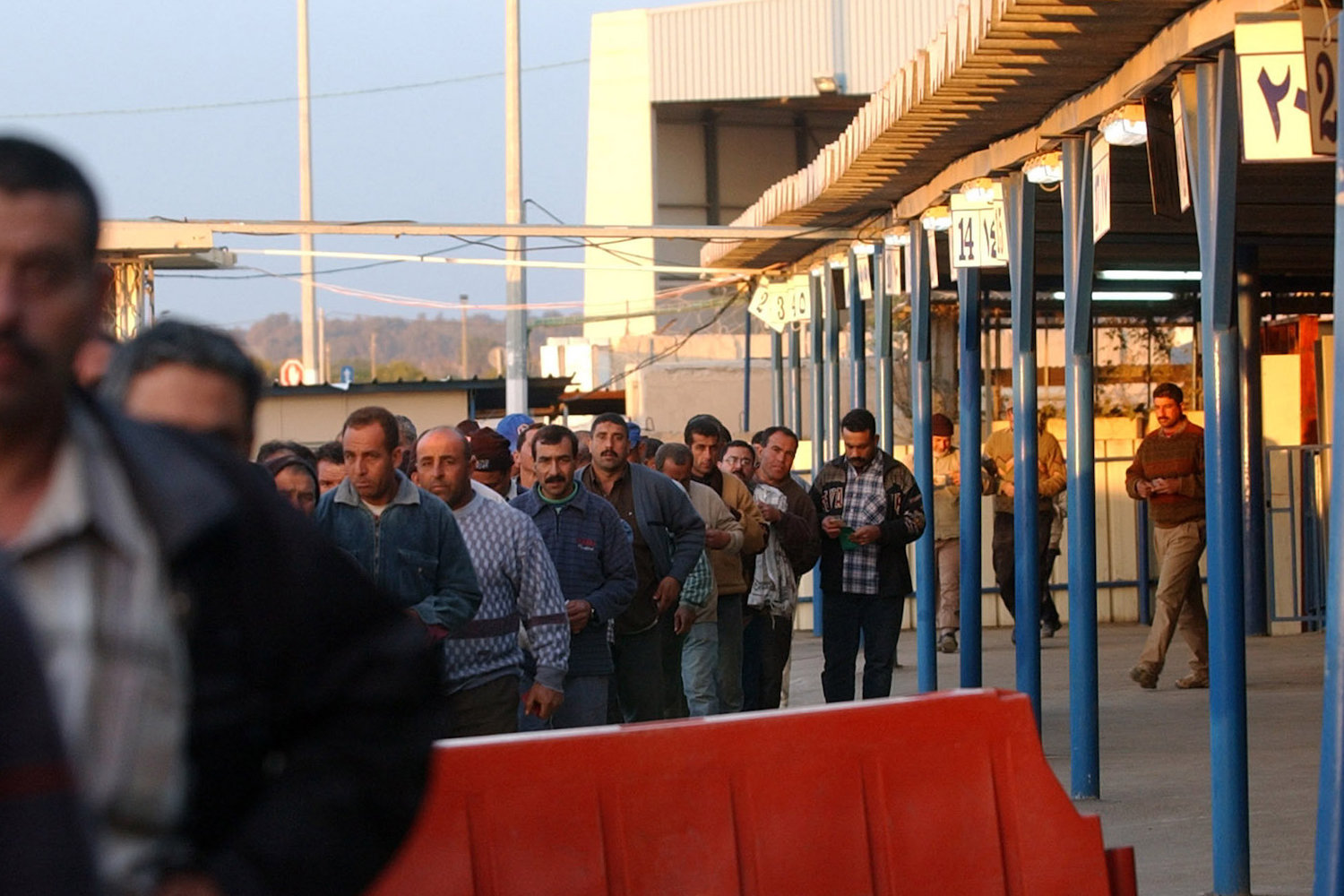 Palestinian workers return to the Gaza Strip at the end of their work day from the Erez Industrial Zone. Erez Crossing, Gaza, March 9, 2004. (Sharon Perry/Flash90)

PHR-I is one of various organizations that have stepped into the vacuum to try to support Gaza patients, Majadle explained. Over the last month, her NGO dealt with 104 requests for assistance — more than triple the 30 requests they would normally handle per month.

According to a new report by the Israeli NGO Gisha, which focuses on freedom of movement for Palestinians in Gaza, the PA’s halt in coordination, and Israel’s refusal to process permit applications besides urgent medical cases, have resulted in a 98.5 percent drop in the number of exits from Gaza via the Erez Crossing in June. In 2019, the monthly average of exits recorded at the crossing 15,000; in June 2020, only 218 Palestinians left the strip.

In a joint letter to the Israeli Defense Minister, Attorney General, and COGAT on July 19, Gisha, PHR-I, Adalah, Hamoked, and the Association for Civil Rights in Israel called on Israel to immediately lift travel restrictions that were “imposed under the guise of the pandemic” and demanded that Israel “admit travel applications for all needs” even without coordination with the PA. Using the PA’s decision as an excuse to stop the permit processes, the letter continued, is a “complete abdication of Israel’s legal responsibilities and obligations.”

The organizations also brought attention to the fact that, in the week of July 5, Israel issued almost 100,000 permits to Palestinians in the West Bank, primarily for laborers, This indicated that the authorities were capable of ensuring the same for Gaza, but were instead exploiting the health crisis to “further entrench the severe closure it has imposed on Gaza,” the letter argued, while allowing Palestinians into Israel according to its own needs.

‘I have the right to go out for treatment’

For medical patients in Gaza, the permit regime’s delays and rejections of travel requests — which it did for a third of applications in 2019 — can sometimes be a matter of life and death. 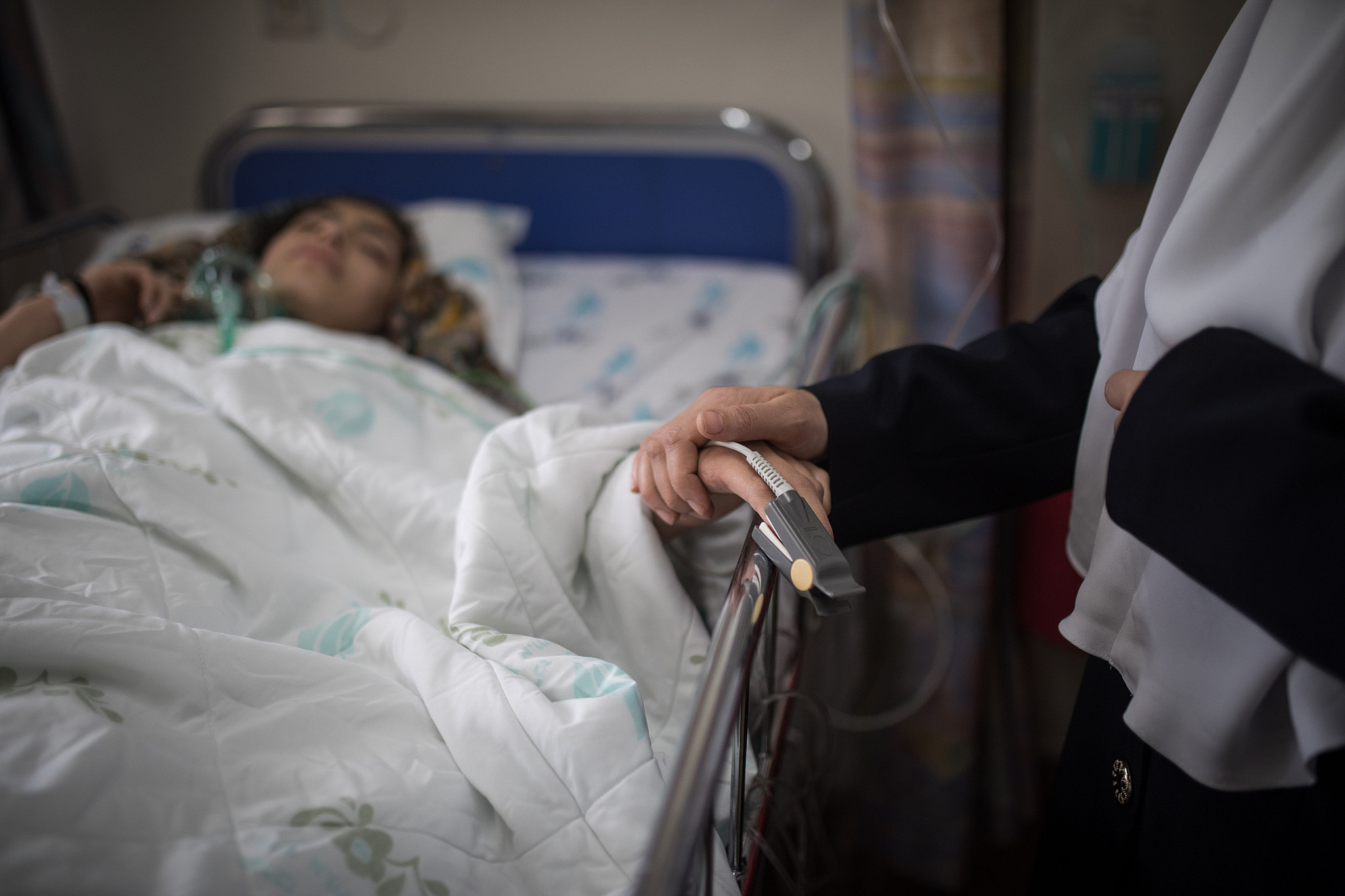 A young Palestinian girl is seen recovering with her mother by her side after going through a cardiac catheterization at the Wolfson Medical Center in the central Israeli city of Holon, on April 11, 2018. (Hadas Parush/Flash90)

“Preconditioning healthcare on Israeli-issued permits is an unnecessary barrier that has long violated the right to health of Palestinians,” wrote the organizations. “The current situation is a desperate one for Gaza patients, who face no avenue to access health services needed outside the Gaza Strip. Israel’s permit system, an integral part of the illegal closure of Gaza, is an arbitrary and unnecessary measure that unlawfully preconditions urgent and lifesaving care for thousands of Palestinians.”

With the current impasse in the permit regime system, they continued, it is “incumbent upon the Israeli occupying authorities to provide a safe and expeditious alternative to the permit system — one that fulfils the fundamental rights of Palestinian patients and lives up to international standards concerning the right to health under occupation.”

Dr. Gerald Rockenshaub, the head of the WHO’s occupied territories office, said that while there have been negotiations between the WHO and the PA to create a temporary mechanism that would address the immediate humanitarian needs of Gaza residents, long-term solutions like building Gaza’s medical care capacity still have to be pursued.

In the meantime, with delays very likely, Waseem is bracing himself to begin the permit application all over again for his next heart surgery in Jerusalem. “I am a human being and I have the right to go out for treatment,” he told +972 over WhatsApp. If he cannot get the permit quickly, he said, “I will be very sad and death will come closer to me.”

Correction: A previous version of this article stated that Israel issued 15,000 exit permits in June 2019 and 218 in June 2020. The article has been amended to reflect that those numbers represent the number of Palestinians who left Gaza, rather than exit permits issued by Israel.