As the director of an organization that promotes the right to freedom of movement in Gaza, when I heard that Israel is offering you the chance to make a ‘humanitarian’ visit to your family, I felt a familiar cringe. An open letter to Reps. Tlaib and Omar. 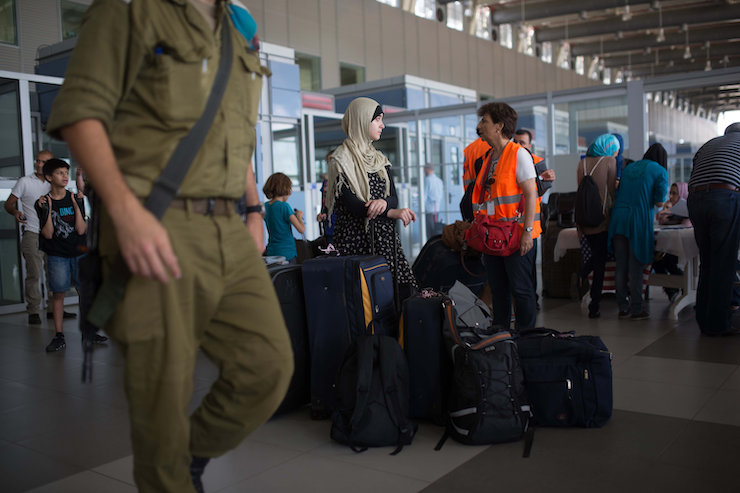 Palestinians wait at the Erez crossing between Gaza and Israel on July 13, 2014. (Flash90)

We were meant to meet this coming Sunday evening. I was so pleased when I heard that you had decided to include the Gaza Strip on your itinerary, figuratively if not literally, given that you wouldn’t be able to physically travel there. You had arranged a Skype conversation with young Palestinians in Gaza. As the director of an organization that promotes the right to freedom of movement in the Palestinian territory, Gisha, I was lucky to be invited to offer context for why those young people couldn’t simply cross the relatively short distance to Jerusalem to meet you in person.

Rep. Omar, I am also a naturalized U.S. citizen. I am an Israeli-American. I was born in Haifa, and my young parents, determined to study in the United States, took me and my sister to Los Angeles, where I was raised. At age 5, I helped my parents learn the Pledge of Allegiance when they took their oath of citizenship. Your experience speaks deeply to me as someone who feels at home in America and is proud of its traditions of welcoming the stranger, and who has an eye toward how the U.S. can use its power to lift others up, at home and abroad. I’m so sorry we won’t be able to meet because your travel was banned by the country that I now call home.

The ability to travel shaped my personal history and that of my family. My grandparents and great-grandparents had fled turbulent and dangerous circumstances across Europe and North Africa to come to Palestine, which later became Israel. My parents had searched for better opportunities in America, and then there was me, coming back to Israel in search of meaningful work to promote human rights and be part of a struggle to end the occupation.

When I arrived in Israel, 12 years ago, my passport granted me easy entrance and I was even praised for having “returned,” privileges granted to me by order of my birth to Israeli Jewish parents. When I arrived, I learned more about restrictions on movement that Palestinians face, about discrimination against Palestinian citizens of Israel, and about Palestinians longing for their homeland in the diaspora, with no horizon to actually realize their dreams to visit, let alone return. I learned to not take for granted that I can travel at my will.

Rep. Tlaib, one of the reasons I came to Israel was to be with my grandmothers, both of whom lived in Haifa and welcomed me so warmly. One of my grandmothers, savta in Hebrew, is still alive. We sharply disagree on politics but she teaches me to be tolerant of those with whom I disagree. I love her dearly. I am devastated for you that you had planned to visit your sity and now won’t get to see her. The love of a grandmother is irreplaceable, and shame on both my president in the United States and my prime minister in Israel for denying you her embrace. 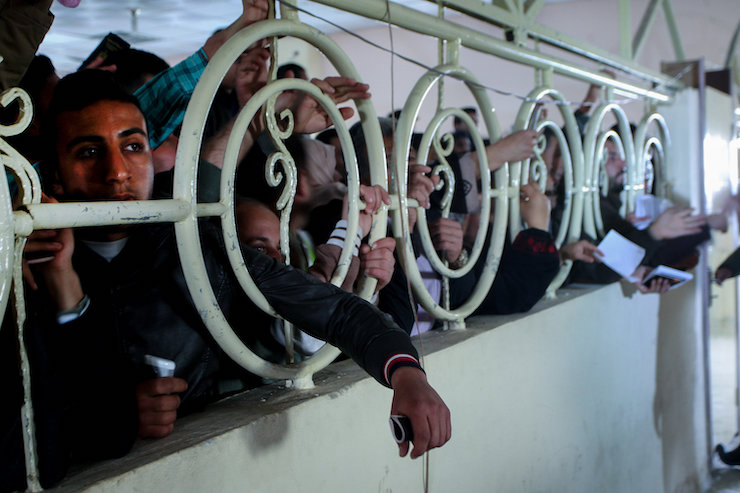 Palestinians wait to cross into Egypt through the Rafah crossing in the southern Gaza Strip after it was opened by Egyptian authorities for humanitarian cases, on February 7, 2017. (Abed Rahim Khatib/Flash90)

When I heard that the government is offering you the chance to make a “humanitarian” visit to your family, I felt a familiar cringe. The Gaza Strip has been gradually more and more isolated from the West Bank and Israel over a period of decades, but in 2007, when Hamas took power in the strip, Israel closed the crossings to all but what it calls “humanitarian access.”

In reality, there is nothing humanitarian about the closure of Gaza. To enter and exit the territory, Palestinians need to request permits from the Israeli military. To qualify for a permit, they have to meet one of a stringent set of criteria. Unfortunately, security is far from the only filter, as international law would require.

If you are a resident of Gaza, visiting your grandmother in the West Bank is out of the question. If you wanted to visit your mother, she would have to be dying or dead, sorry to put it so bluntly. The burden to prove she was actually dying, and not just very ill, would be on you. If her funeral had passed before you got a response, the Israeli authorities could tell you that the mourning period had passed and there is no “humanitarian reason” for your travel. These statements are based on the true stories of our clients at Gisha.

This is why the word “humanitarian” in the mouths of my government makes me cringe.

When it comes to young people, who make up the vast majority of Gaza’s two million strong population – in fact 70 percent of the population is under 30 – they have little hope for meeting one of the criteria for traveling out of the strip. Meeting American congresspeople would not be considered a reason to grant young people permits, even if they passed a security screening.

I hope you’ll get to speak to the young people we were meant to hear from on Sunday. They deserve to be heard and seen. Their reality cannot be hidden behind walls and checkpoints. I am almost sure that alongside the tragedy of their circumstances, they will also share with you the vast potential of the Gaza Strip and its residents. I am lucky to hear people’s dreams and the reasons they hope to travel, and lucky to lead an organization that helps them navigate the violent bureaucracy of the Israeli military’s permit regime – and on many occasions, beat it.

American power has been instrumental in leading to policy change here that improved people’s lives. The U.S. long ago articulated a vision for the end of the conflict, and while American power has not stopped human rights violations, which are inherent to the occupation – at times even facilitating it – we can safely assume U.S. influence was a factor in curbing some of the most egregious uses of force.

I’m sorry we won’t be able to meet. I would have liked to talk about how we can work together to unlock Gaza and the incredible potential of its young people. I hope you will continue to use your power and platform to fight for a better future for Americans, Israelis and Palestinians. The change our governments are so afraid of is within our reach.