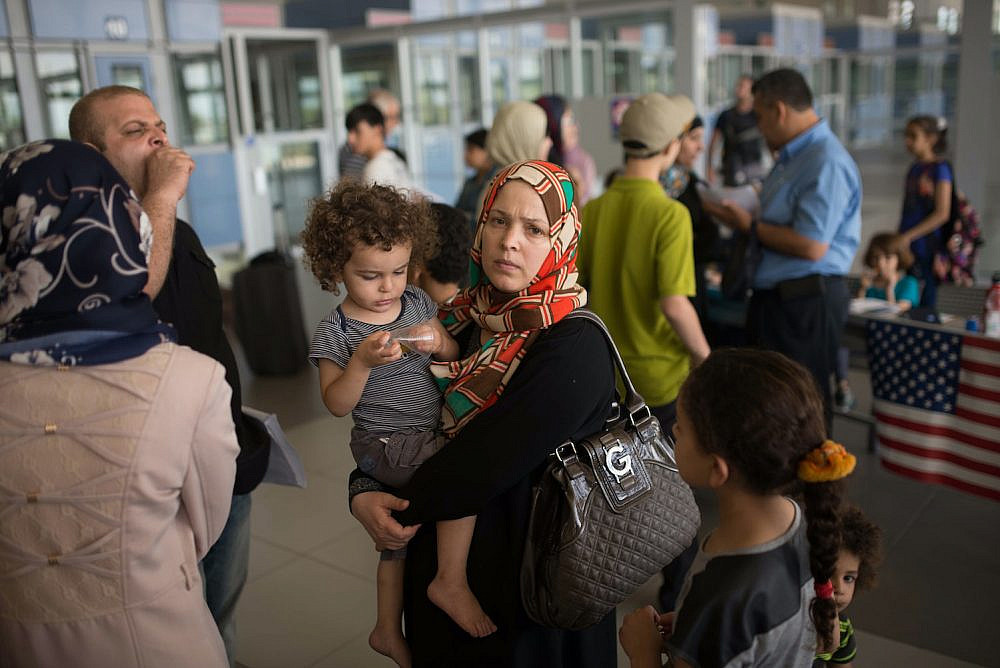 Palestinians wait at the Erez Crossing between Gaza and Israel on July 13, 2014. (Flash90)

Opening up Gaza “is clearly in Israel’s interest,” said the manager of the Erez Crossing between Israel and Gaza, Shlomo Tzaban, during a talk with students at Ben-Gurion University last week.

Tzaban, who has been overseeing the civilian entry and exit point between Israel and Gaza since security at the crossing was privatized in 2006, was a guest speaker in a class on the history of Gaza headed by Dr. Yonatan Mendel and Dotan Halevi. In a recording of the talk that was reviewed by Local Call, Tzaban, who described himself as “the manager of all of Gaza,” contradicted the positions of many Israeli politicians regarding the strip and debunked the security myths that are commonly used to justify the siege, which Israel has imposed since 2007. The southern Rafah Crossing that Gaza shares with Egypt is the only crossing not controlled by Israel.

Tzaban insisted throughout his lecture that Gaza’s development and prosperity was a necessity — echoing the positions of many former Israeli military officials who have criticized the policy of maintaining the blockade. “If things are bad in Gaza, they will be bad in Israel,” he said. 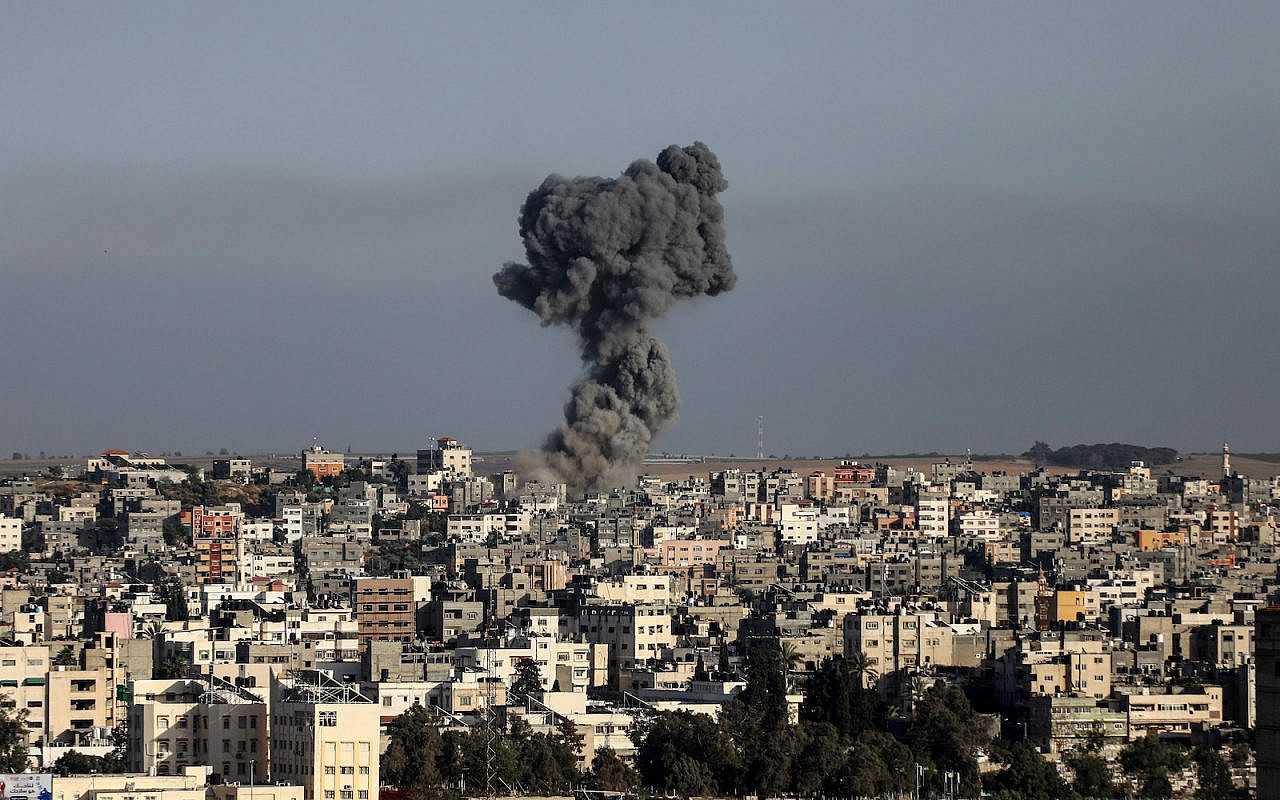 Smoke rises after an Israeli airstrike in Gaza City, May 11, 2021. (Mohammed Zaanoun/Activestills)

In his talk, Tzaban outlined the strip’s history since 1948, “as told by Gazans,” he said. Palestinians in Gaza remember Egypt’s rule over the strip from 1948 to 1967 “as a Holocaust,” whereas the years between Israel’s occupation of Gaza from 1967 until the beginning of the First Intifada in 1987 are considered a time of prosperity. “They [Palestinians] remember these years with tears in their eyes,” he claimed.

Following the First Intifada, though, when Israel implemented restrictions on movement for Palestinians in Gaza, a “slippery slope” caused the strip to become a “fifth world” territory, Tzaban explained.

Since Israel’s latest military operation in May, during which Israel killed more than 250 people in Gaza and Hamas killed 13 in Israel, the situation in the strip has extremely deteriorated, said Tzaban. Before the 11-day war, around 700 trucks delivered goods to Gaza through the Kerem Shalom Crossing every day, he said. However, data collected by the United Nations Office for the Coordination of Humanitarian Affairs (OCHA) in the occupied territories shows that an average of 300 trucks a day were entering Gaza in 2019, and Israel still severely restricts and often entirely forbids the entry of goods that are essential for industry, construction, and other civilian needs. As of the day of the lecture, however, only about 130 trucks were being let in a day, said Tzaban, which aligns with OCHA’s tracking of 4,300 truckloads last month.

‘Gaza is an Israeli problem’

When asked about Israel’s “separation policy” between Gaza and the West Bank, Tzaban replied that while it serves the West Bank, the policy “is very bad for Gaza.” Opening up Gaza, he added, would be very beneficial to Israel. “It is in Israel’s interest that 200,000 Gazans enter [into Israel] today to build us homes and provide financial support to the 2.2 million Palestinians [living there] who have nothing to do with the conflict,” he said.

Tzaban was firm in his position on the lack of security threats involved in opening up Gaza: “Since 2006 to this day, I’ve allowed 9 million Palestinians to enter from Gaza to Israel. There were zero casualties, and zero terrorists,” he said. “If you open the crossings, there will not be a single suicide bombing.”

The Shin Bet, Israel’s internal security agency, “knows how to distinguish between those who are good and those who are bad,” said Tzaban, and Israel “has the most advanced technologies in the world” to inspect those entering Israel. “We must let them [Palestinians] taste what they’ve known between 1967 and 1987, the perks of economy, employment, livelihood, and give them back their dignity,” he added.

Tzaban also expressed unwavering support for direct coordination with Hamas. “I’ve said this a long time ago: We must bring Hamas to the Erez Crossing, we must bring their officers,” he said. 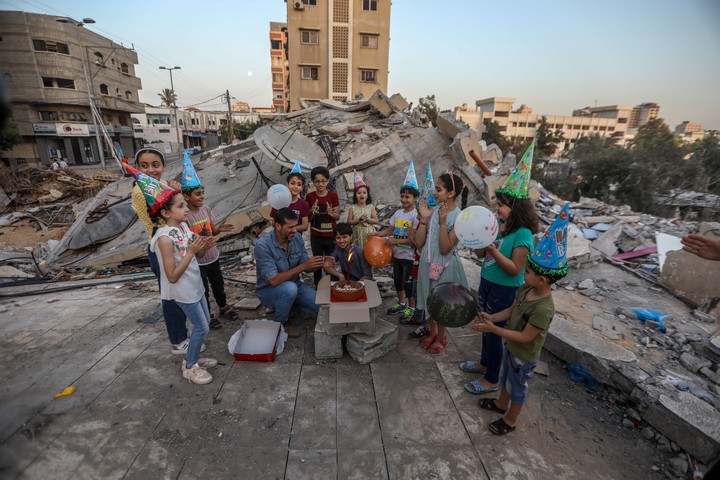 A Palestinian family holds a birthday party in the rubble of their house, destroyed by Israeli bombs, in Gaza City, May 25, 2021. (Mohammed Zaanoun/Activestills)

“Do you know that before 1987, Hamas’s leadership, [co-founder] Ahmad Yassin and others, would visit the Kirya freely?” Tzaban remarked, referring to Israel’s military compound in Tel Aviv. “You must understand: agreements are made with enemies, there’s no need for deals with friends. I’m in favor of using mediators, but also of communicating directly [with Hamas], as we did in the Oslo Accords.”

Regarding Hamas, Tzaban claimed on the one hand that “terror organizations must be destroyed, terrorist leaders must be wiped out.” But in the same breath, he argued that opening the crossings between Israel and Gaza is a mutual interest. “Hamas will not prevent the residents of Gaza from entering Israel,” he surmised.

“In five years, there will be 3 million Palestinians in Gaza, living across 365 square kilometers [141 square miles],” stated Tzaban. “Gaza is an Israeli problem, not a Palestinian one.”

He continued: “If we don’t solve this, with immense courage, creativity and the investment of all the countries of the world — the United States, the European Union, the Quartet and others — we will continue to run from incident to incident, from confrontation to confrontation, from war to war, including our grandchildren and great-grandchildren,” said Tzaban. “It will not help — left or right, hawk or dove. We must take action here, open the gates of Gaza and within a decade there will no longer be a terror organization.”

In a statement, the class lecturers, Mendel and Halevi, said they had no part in leaking Tzaban’s talk to the press. They explained that this was the second year that their course on Gaza’s history is being offered, in which they’ve hosted more than 20 experts on Gaza. The class has heard from Israeli, Palestinian and international scholars; experts on the ground; representatives from the former Jewish settlement of Gush Katif, which Israel evacuated in 2005; journalists; artists; UN representatives; and even Israeli government officials. “Of all the speakers, not even one found the siege of Gaza to be sustainable,” the statement said.

In response to a request for comment on Tzaban’s remarks, an Israeli Defense Ministry spokesperson said that “Tzaban presented his personal opinions, which do not represent the Defense Ministry’s position.”