The 100-mile journey of leaving Gaza took 12 hours, six checkpoints, and interrogations so humiliating that a year later, I am still reliving the trauma. 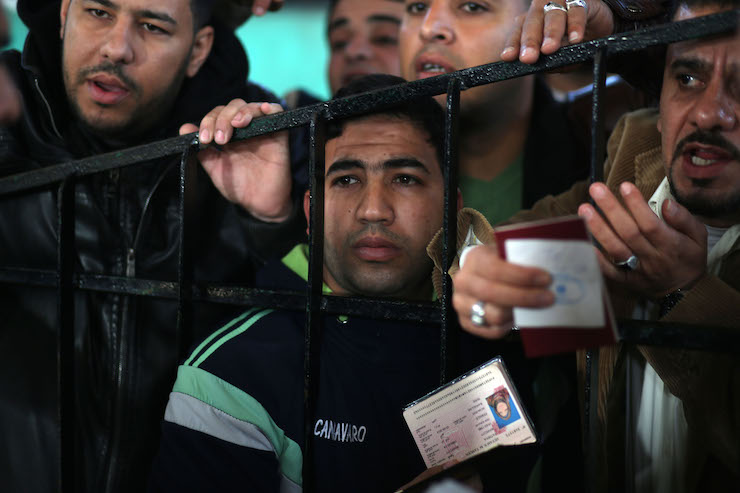 Palestinians wait at the Rafah border crossing with Egypt, in the southern Gaza Strip. (Mohammed Zaanoun)

On July 31, 2018 the Palestinian Civil Affairs office called me at 10:08 a.m., while I was sitting at my desk in Gaza on what had begun as an ordinary workday morning. The caller informed me that the Israeli authorities had issued my permit to leave Gaza in order to study abroad, and that I had to depart immediately. “The [deportation] shuttle is waiting for you,” said the caller. “You must make a decision now: you either leave right now or you lose the permit.”

I was stunned. Just a few days earlier, the very same Israeli authorities had rejected my application for an exit visa; since then I had received no updates. Now, if I wanted to leave, I would have to walk away from my desk and head straight to Erez Crossing. I would not have time to say goodbye to my family, to hug my parents or my siblings. I would not even have time to pack my clothes, or withdraw cash from the bank to cover my travel expenses.

Worse still was the uncertainty. The Palestinian authorities were telling me that the Israelis had approved my visa even as the U.S. Consulate General in Jerusalem, which had mediated on my behalf with the Israeli authorities, said that my request for an exit permit had been rejected.

I had three or four minutes to decide, under incredible pressure, while thinking about all the things I had to leave behind: my clothes, my laptop with all my files on it, the friends from whom I had no time to take my leave, the words of love and support I desperately needed from family and loved ones. I did not even have time to inform my employer.

I decided to go. Leaving my laptop open on my desk with my assignment unfinished, I went to my rented room in Gaza City, just a 30-minute drive from my family home. I took my passport and Jordanian non-objection confirmation, and went to the Erez Crossing.

I arrived at the first Erez checkpoint, which is controlled by Hamas. There, I was subjected to a 30-minute security interview. I remained calm throughout, although I knew I was already late for the shuttle. The interviewer barely spoke English and seemed to have little understanding of what it meant to travel to a foreign country for graduate school (remember, these are the people ruling Gaza). My nerves were on fire. Finally, I was done with the interview.

I proceeded to the Erez checkpoint that is controlled by the Palestinian Authority, where Palestinians receive their Israel-issued permit. I submitted my ID and was asked to wait. My heart beat faster, my hands were sweating, my mind almost exploding from overthinking, my body rigid with tension, I waited, and waited, and … my permit was printed and handed to me! 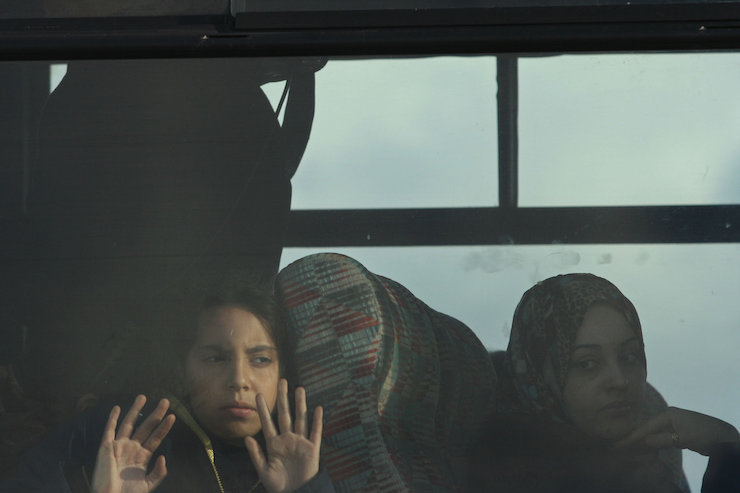 A Palestinian girl sits in a bus as she leaves Gaza with her family through the Erez crossing December 2, 2007. (Thair Alhassany/Flash90)

The words “allowed despite ban,” were stamped on my Israeli permit. Their meaning: despite the general ban on Palestinians from Gaza entering Israel, I would be allowed on this occasion to travel across the country to reach Allenby Crossing in the West Bank (from Allenby I would travel to Amman, and from Amman I would fly to London). But this permit did not guarantee I would be allowed to cross again.

In other words, as is the case for nearly all Gaza Palestinians who receive exit permits from Israel, I did not know whether or when I would be allowed to visit my family again. And I was still worried about the call from the U.S. Consulate and their insistence that my permit had not been approved. I was afraid the printed permit would turn out to be a mistake on the part of the Palestinian Authority. “You cannot back down now,” I said to myself, as I continued my journey.

I was now at the Israeli side of Erez Crossing. I had only the clothes I was wearing, my mobile phone, passport, and wallet (which was almost empty of cash), so the security inspection did not take long. I proceeded to the last counter, submitted my ID, passport, and Israeli permit, and waited. Three border officers in civilian clothes approached me, each asking the same questions, and then a fourth dressed in military uniform. Still, I was told to wait.

The shuttle was full, except for my seat; all the other passengers were waiting for me. Another hour passed. Finally, my documents were returned and I was approved to cross. I was approved to enjoy the most simple, most fundamental right to freedom of movement, and yes I say it in such a way because it is a genuine privilege when/if a Palestinian from Gaza is afforded that freedom.

Now to the fourth border in Jericho, controlled by the Palestinian Authority. I needed to pay for the shuttle and border crossing fee but did not have enough cash. There were no automated teller machines near the Allenby Crossing, and shuttle passengers are not allowed to leave the vehicle for any reason during the journey from the Erez Crossing through Israel to Jericho. I had only 180 shekels (about $50) on me, and the shuttle cost 150 shekels.

I had no money to pay for exit fees at the Palestinian border or for transportation from Allenby Crossing to Amman. Near despair, I called my father. He was shocked to hear about my abrupt departure, but pulled himself together quickly and suggested that I ask the driver if my father could transfer funds to the Gaza-based office of the shuttle service company and the driver would then give me the funds in cash. Yes, it was possible. “Everything is going to be okay,” I kept comforting myself.

Now we were at Allenby Crossing. We arrived at the fifth checkpoint, controlled by Israel. After undergoing yet another body search I submitted my passport and was told to wait. After some time, I was called for another interview with Israeli Intelligence. An Intelligence officer kept me standing while he and a uniformed, armed border police officer interrogated me about every aspect of my life — my personal relationships, my academic records, my professional experience, my financial situation, and my future plans. The officer in civilian clothes interrogated me in broken Arabic, with an arrogance I had never in my life encountered. Nor had I seen anything like it in movies, or read about it in literature.

Only when the officer claimed to doubt my stated purpose of travel did I become truly angry. “You do not have clothes or a suitcase, and you do not have any money,” he said. “How do you expect me to believe you are leaving for a one-year graduate program?” He must have known that I hadn’t had any choice in the matter. That if I had stopped to pack and withdraw money from the bank, I would have missed my opportunity to leave.

I invested enormous effort in winning a full scholarship to study conflict prevention and peace-building at Durham University in the U.K. At a security interview with Israeli Intelligence at Erez just seven months earlier, I had responded to every question and shared more than enough to prove that my security record was completely clean. Israeli Intelligence had taken only three days following that interview to issue my security clearance. I was shocked at the questions, accusations, and assumptions my interviewer at Allenby was now making, the worst of which was: “Since you do not have clothes or money, you must be leaving to meet with regional Intelligence apparatuses.”

My strength was fading, but I kept repeating that I had no affiliation with any local or regional political groups whatsoever, nor was I interested in having any such ties. He continued to make accusations and assumptions and I continued to provide the same truthful response: I am a prospective graduate student interested only in pursuing an education; this is what has defined my life for the past four years of study and work, and it is what will continue to define my life in the future. I wish now that I could send that Intelligence officer a copy of my dissertation on peace education at Durham; my traumatic encounter with him further confirmed my belief in the urgency of peace, which is what I pursue in my research.

The interview seemed interminable, with the officer continuing to dismiss my responses, question my integrity, and disparage me. No human being should be subjected to such disrespect and humiliation. Finally, he took my travel documents and disappeared. “How is this conducive to your security, to peace between us,” I wanted to yell at him as he turned away. “How will you sleep peacefully tonight, knowing the fear and distress you have caused me?” I was afraid that if I opened my mouth to yell at him I would burst into tears. 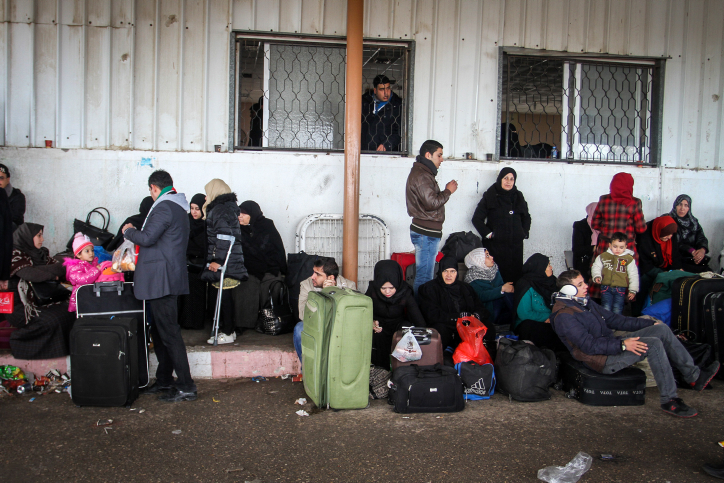 My legs hurt from the long journey in the overcrowded shuttle and from standing as I was interrogated. Waiting. Waiting. Still waiting. Still waiting. I felt that I was seconds away from collapse when I was handed my Israeli exit visa. And now I crossed to the sixth border, which was controlled by the Jordanians; they were professional, efficient, and kind.

During the 11 months I studied conflict and peace at Durham University, I would leave the classroom or the library, put on my headphones and listen to music at a very high volume as I relived that deeply traumatic experience. I analyzed it through the lens of the articles and books on peace I had just read — some, very insightful, by Israeli scholars.

My story is far from uncommon. Every single Palestinian — regardless of gender, age, socioeconomic background — is subject to the same humiliation and suffering. If there is one thing I understand about the pursuit of peace between Israel and the Palestinians today, it is that this denial of the most fundamental rights is wrong. It is in violation not only of legal frameworks and the values of peace, but also of the basic Jewish values of kavod (respect), tzedek (justice), and chesed (generosity).

Anas Almassri, 23, is a Palestinian from Gaza. He holds a bachelor’s degree in English and education and will be awarded his master’s in peace studies later this year. Anas is currently continuing his graduate education at Georgetown University’s Walsh School of Foreign Service, where he plans to focus his research on peace education in the Arab world.