Ismail Shawa never expected that a new luxury apartment building would have such an immediate and dramatic effect on his family’s life — that was until contractors sealed off the entrance to their home with a concrete wall, effectively trapping them inside. 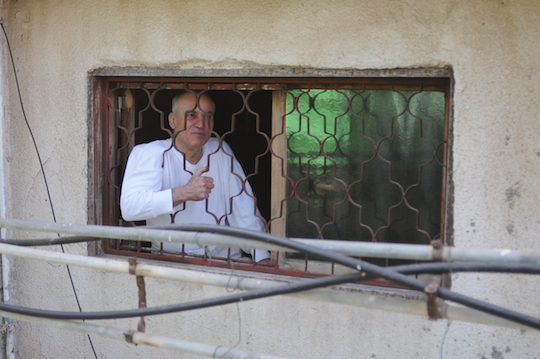 Ismail Shawa standing in the window he is forced to climb through in order to exit and enter his Jaffa home. (Photo by Yudit Ilany)

To exit or enter his Jaffa home, Ismail Shawa, 62, has to remove the bars from his bedroom window and climb out and over the neighbor’s water pipes. He still has to cross a yard that doesn’t belong to him but for the time being, no has told him not to. The other option is to exit over another neighbor’s flimsy and crumbling asbestos roof.

When his wife, Itidal Shawa, 67, fell ill a week and a half ago, paramedics had to call in the fire brigade to extract her because there is no longer any other way out but to climb through the small window — or over the neighbor’s roof.

A judge from the Tel Aviv Magistrate’s Court described the arrangement as “not easy,” but asserted that the family “can still enter and exit their home.” Perhaps the judge wouldn’t mind entering his courtroom through a small, high-placed window.

And all of this because a contractor building a fancy new luxury apartment building next door erected a concrete wall that blocks the entrance to the Shawas’ home.

The plot on which the fancy housing complex sits was bought from the Israel Land Authority some years ago. Perhaps no one paid attention to the fact that the only entrance to the Shawa family home is through the same plot. Or perhaps they did pay attention but simply didn’t care.

The Shawas are a regular Jaffa family, simple people. And fancy housing developers do what they want; they have connections, expensive lawyers and when necessary, employ private guard companies with less-than-perfect behavioral records, as the Shawas found out a few weeks ago.

The Shawa family’s story starts in 1977 when Ismail and Itidal got married, took out a bank loan and bought protected tenancy rights from Sa’ado Jabar, the owner of the building in which the Shawas’ ground-floor apartment is located. The Shawas’ only entrance has always been from the backside of the building and through the empty adjacent plot.

Seven children were born and over the years and the Shawas turned their backyard into a garden with orange, lemon and mandarin trees, a grape arbour and lots of flowers. The children had their own small “farm” for their pets: chickens, a dog and lots of birds. Over the years, the garden overflowed into to the empty plot next door, which prior to their gardening efforts had become a place where drug dealers and addicts hid their stashes, weapons and stolen goods. The municipality even encouraged the Shawas to use the plot, then owned by the Israel Land Authority.

Mr. Shawa worked as small-time businessman while Mrs. Shawa was at home educating the children. Two of the married children moved out. The other five, all adults now, still live at home.

In 2010 the neighboring plot was sold and one morning in 2012, the Shawas woke up to the sound of bulldozers destroying their lovely garden. Mr. Shawa called the police, who stood by and watched and wouldn’t allow him to take his property or save the garden furniture and bird cages. It was then that the Shawas learned of the building planned for next door.

Mr. Saado Jabar, the owner of the building, an elderly and well-respected man in Jaffa, spoke with the contractor who promised him the Shawas would be given right of way. “They made the agreement by shaking hands,” Sammy Jabar, the owner’s son says. “My father is of that generation where a man’s word and a handshake mean more than any paper.”

In spite of that, Mr. Shawa agreed to stop using the old entrance if another entrance was arranged for him and his family. This was not done, first and foremost, because it was almost impossible technically, but also because it would create another legal problem: somebody else owns the land on the other side of the building and there would be no guaranteed right of way there either.

Two weeks ago the Shawas came home to find their only entrance blocked off by a concrete wall being protected by nearly a dozen private guards. Unable to enter their home, the Shawas called the police and showed them a letter from the municipality’s building department clearly stating an entrance path to the Shawa family home must be left open. That didn’t help. The police stood by and did nothing. 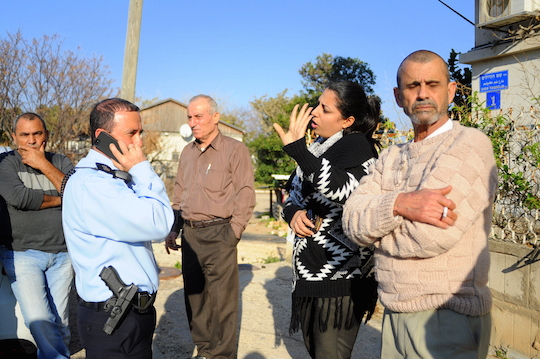 The Shawas immediately took the case to court and the duty judge decided not to issue a temporary injunction or demolition order. Thus, the Shawas spent their first night outside of their home, unable to enter it. The second day they brought equipment and climbed in, over the asbestos roof belonging to one of the neighbours on the other side. It was then that the fire department had to be called to extricate Mrs. Shawa.

When a court finally decided they should be given right of way, Mr. Shawa once again called the police in order to enforce their right of way. The police did not intervene. It turned out the developers had appealed.

Accepting the developers’ appeal, a second judge decided that the concrete wall blocking the Shawas’ entrance did not have to be demolished, ruling the Shawas “can still enter their home,” albeit in an “uneasy manner.”

Two weeks later, the Shawas still have to climb through their bedroom window to enter and exit their home because their other neighbor doesn’t want them to climb over her roof any longer. She’s rightfully afraid that its crumbling asbestos will crack or collapse.

The Shawas spoke to the developer of the new building next door. They say he couldn’t care less. Wealthy Tel Aviv developers building in Jaffa tend not to see the poor neighbors below their fancy luxury buildings.

The future tenants of the fancy apartments will one day soon live next door to people who have many reasons not to like them. People who have to climb through a window to enter their home. People who have no gas for cooking because they can no longer replace the empty gas canisters. And it seems that no one really cares. Welcome to gentrifying Jaffa, 2014.

Yudit Ilany is an activist in the Jaffa Popular Committee for Housing and Land Allocation Rights.