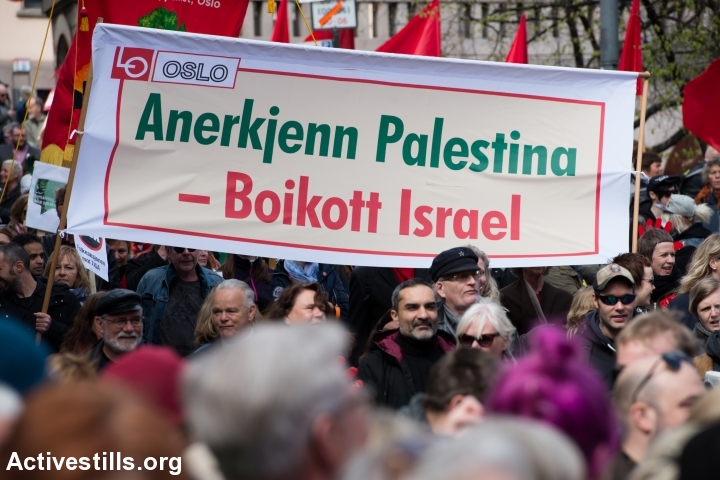 A banner of the Norwegian Confederation of Trade Unions (LO) reads, “Recognize Palestine, Boycott Israel” as thousands of Norwegians march through Oslo city streets in a May Day parade, May 1, 2016. (Ryan Rodrick Beiler/Activestills.org)

In the beginning of December, +972’s Haggai Matar revealed that Germany’s Bank für Sozialwirtschaft (Bank for Social Economy) had closed an account belonging to Jewish Voice for a Just Peace in the Middle East, a German-based peace group. According to the bank, the organization was part of a campaign that undermined Israel’s existence.

The bank’s claims, however, are inaccurate. In response to the bank’s decision to shut down their its account, Jewish Voice for Just Peace emphasized that the organization does not oppose Israel’s existence, and that its support for BDS is part of a “nonviolent campaign for human rights, and that we support actions directed at companies that directly profit from the occupation, and that even our platform includes support for two states.”

These inaccuracies become even more glaring when taking into account the hypocrisy of German bankers who, on the one hand, condemn racism, while handling the account of the Jewish National Fund in Germany.

The JNF’s activities are too long to list here, so here is just a small taste: the organization is currently providing temporary infrastructure to a small group of religious Israeli Jews who are slated to move to the future town of Hiran. Hiran will be built on the ruins of the Bedouin village of Umm al-Hiran in the Negev, which is currently fighting impending demolition.

The JNF is also responsible for helping plant a forest in the Negev in partnership with fundamentalist Christian organization, God TV, on land belonging to the Bedouin village Al-Araqib, which has been demolished 108 times. God TV’s goal is to plant one million trees in Israel in order to hasten the Second Coming. The JNF is also involved in establishing and funding settlements in the West Bank. 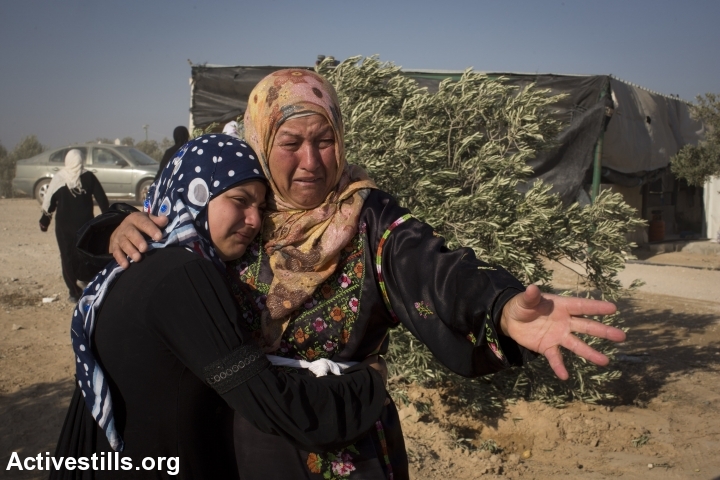 Bedouin women react after Israeli police arrested two boys who were building a shack in the unrecognized Bedouin of Al-Araqib in the Negev desert, one day after the entire village was demolished by the Israeli authorities, June 13, 2014. (photo: Oren Ziv/Activestills.org)

So why is a German bank willing to allow the funding of Jewish-only settlements built in occupied territory, especially after the UN Security Council established that do so is illegal?

It is unclear whether the banks offering services to the Jewish National Fund understand the significance of the organization’s activities. In any case, Bank für Sozialwirtschaft should take a hard look at the facts before it accuses a Jewish group of anti-Semitism.

I asked the bank how it is possible that its ethical standards prevent it from handling the account of a Jewish peace group, yet do not prevent it from doing the same for an organization that effectively supports ethnic cleansing and violations of international law. The bank responded that it cannot discuss its accounts due to its bank secrecy policies.