Bank für Sozialwirtschaft tells members of Jewish Voice for a Just Peace in the Middle East, which includes a number of Israelis, that its account has been closed due to their support for BDS. 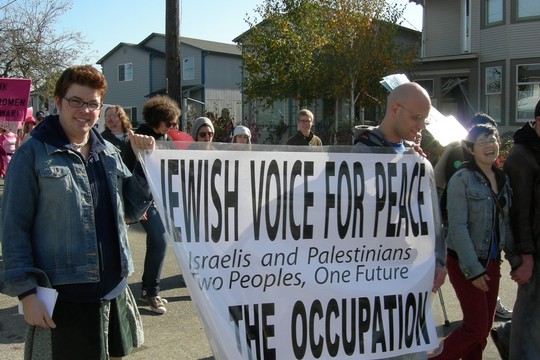 Members of Jewish Voice for Peace at a demonstration in Seattle, October 2007. (CC BY-SA 3.0 Joe Mabel)

Can a Jewish organization with Israeli members be considered anti-Semitic? Is it the job of a German bank to make that call? According to Bank für Sozialwirtschaft (Bank for Social Economy) the answer to those two questions is a resounding yes.

Six weeks ago members of the group Jewish Voice for a Just Peace in the Middle East, based in Germany, received a message from their bank that their account was being closed, without any additional explanations. The organization, which was founded as a local chapter of European Jews for a Just Peace (EJJP), a federation of Jewish groups aimed at bringing about peace in the Middle East and ensuring human rights for Palestinians. (Full disclosure: Inna Michaeli, who serves on +972’s board, is also a member of the group.)

Only after the bank’s surprising decision to close the account did the organization’s board members discover an article published by Benjamin Weinthal that had been published earlier in the Jerusalem Post. Weinthal’s article described how various Jewish groups asked the bank to close Jewish Voice’s account, allegedly due to its support for the BDS (boycott, divestment and sanctions) movement. The bank provides services to various civil society groups, including a number of Jewish groups, such as the Jewish National Fund (JNF-KKL) in Germany (the Central Welfare Board of Jews in Germany owns 0.7 percent of the bank’s stock). German law allows banks to shut down their clients’ accounts without explanation.

Following protests by Jewish Voice activists, supported by members of the Bundestag, Germany’s parliament, the bank agreed to meet with the organization. “We met with the head and spokesperson of the bank and explained to them that we are a Jewish organization with many Israeli members, and that we cannot be anti-Israel,” says Shir Hever, an Israeli who lives in Germany and serves on Jewish Voice’s board. “We said that our support for BDS is general, as a nonviolent campaign for human rights, and that we support actions directed at companies that directly profit from the occupation, and that even our platform includes support for two states.”

The bank was unconvinced. On Tuesday the bank published a statement according to which the goal of the boycott is to “undermine the foundations of the State of Israel,” and that support for BDS violates the “acceptable rules of democratic dialogue.” The bank’s statement also included a quote by a German sociologist who called the boycott campaign “anti-Semitic.” The bank, which has a number of Jewish shareholders, believes in improving ties between Israel and Germany, and thus cannot allow itself to continue managing the organization’s account.

“That we as Jews and Israelis are accused by a German bank of opposing Israel’s right to exist is something we find outrageous,” wrote the group in a statement published on their website. The activists emphasized that alongside their general support for nonviolent resistance in the mold of BDS, the organization itself supports targeted boycotts on companies that directly profit from the occupation rather than a wholesale boycott of Israel.

A second article published by the Jerusalem Post accused the activists of taking part in a conference alongside members of Hamas. “This is a completely baseless accusation,” Hever told +972. “A member of our organization gave a speech at a conference of Palestinian organizations in Berlin, which also included Mustafa Barghouti [a member of the Palestinian parliament who is dedicated to nonviolence, h.m.].”

Jewish Voice activists are now organizing a public campaign against the bank’s decision. The organization describes the move as an attempt to silence criticism by a left-wing group against Israel’s policies in the occupied territories, viewing it as part of Germany’s importing of Netanyahu’s policies against left-wing NGOs. JV member Inna Michaeli recently published a piece on these pages describing the attempt by politicians and journalists (from the German Left) to try and pull public funding from a Palestinian cultural festival, reminiscent of Israeli Culture Minister Miri Regev’s policies in Israel. Jewish Voice is now calling on their supporters to protest against the bank’s decision, and demand the account be re-opened.