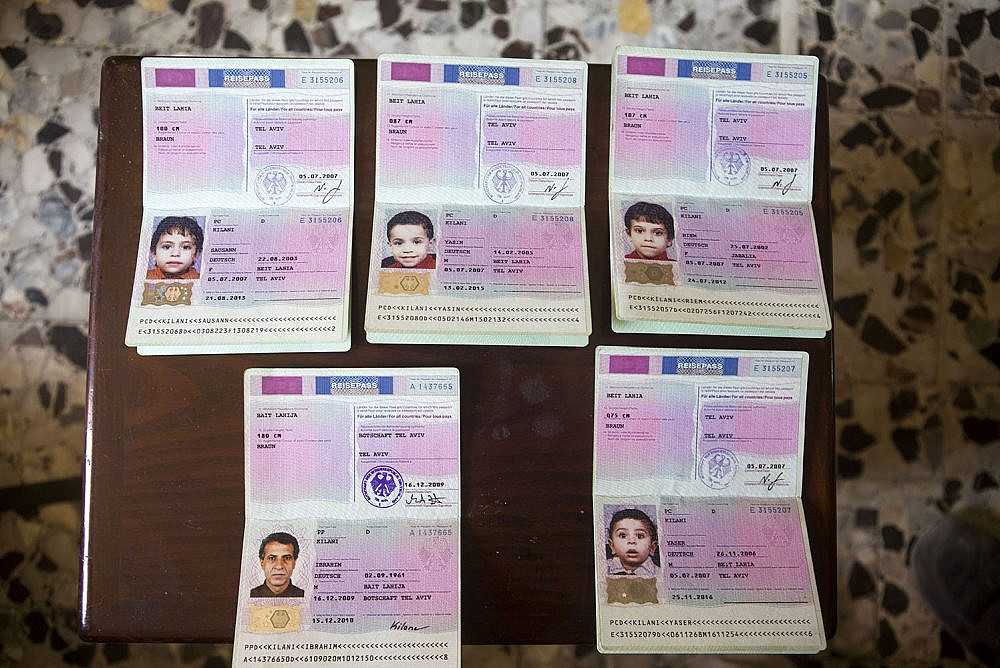 The German passports of Ibrahim al Kilani and four of his children, seen in their home in Beit Lahiya, Gaza Strip, September 18, 2014. Ibrahim was killed together with his wife Taghrid and their five children in an Israeli attack on July 21, 2014, targetting the building where they took refuge in Gaza City. (Anne Paq/Activestills)

On July 21, 2014, an Israeli air strike wiped out an entire family in Gaza City. Ibrahim Kilani, his wife Taghreed, and their five children were all killed instantly in the attack, as were four of Taghreed’s siblings, which came amid Israel’s seven-week assault on Gaza in 2014, dubbed by Israel “Operation Protective Edge.” Over 2,200 Palestinians, including 550 children. were killed during Israel’s assault on Gaza that summer, and many families lost entire generations during the bombardment.

The families had taken shelter in the Majd al-Salam — the Tower of Peace — in Gaza City’s a-Rimal neighborhood after having fled twice: first leaving their home in Beit Layhia after Israeli war planes dropped leaflets warning Palestinians to evacuate, and then escaping Gaza City’s Shujaiyah neighborhood following intensive air strikes there. They had chosen to shelter in the Majd al-Salam because it was in an area that had been described as safe on the Israeli leaflets.

The day before the air strike, Ibrahim had called his children in Germany, Ramsy and Layla, to tell them they were “finally safe.”

“Don’t worry,” he told Ramsy during that last conversation. “This is routine for us.”

A year after the death of his family, Ramsy reflected on how his life had changed. “Not only do I think about my father, who I had not been able to see for years before his death, as I never managed to get into Gaza and he never managed to get out,” he said in 2015. “I think about my half-siblings whose voices and laughter I had heard on the telephone, who told me they loved me, but who I had never encountered in their short lives.” 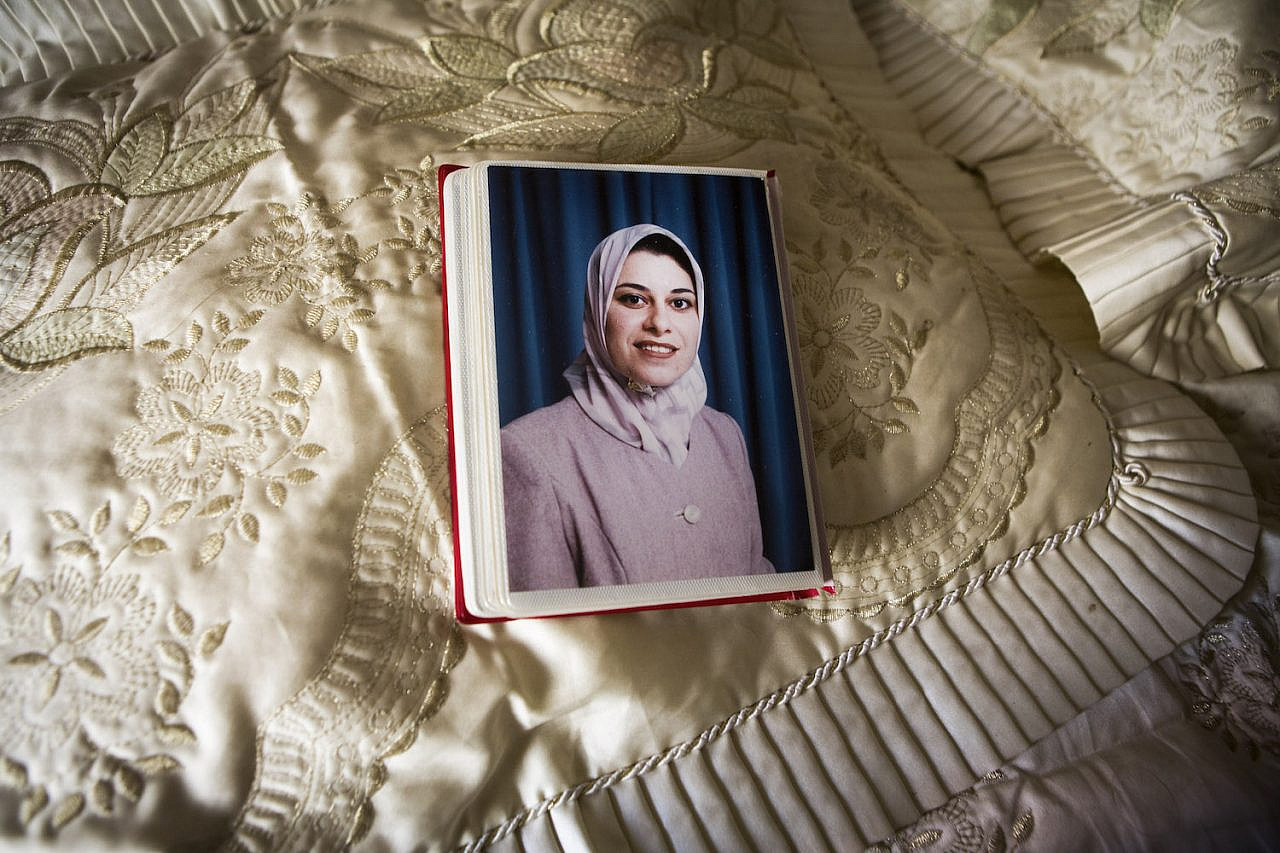 Photo of Taghrid Shabaan al-Kilani set on her bed, in Beit Lahiya, Gaza Strip, September 18, 2014. Taghrid was killed together with her husband Ibrahim and their five children in an Israeli attack on July 21, 2014, when Israeli forces targeted a building in Gaza City. (Anne Paq/Activestills)

In addition to grieving the loss of his family, however, Ramsy had also had to contend with being denied the possibility of justice over their killing. Because although Ramsy’s father and his half-siblings, Elias, Yasser, Yasin, Sawsan, and Reem were, like him, German nationals, the German Federal Public Prosecutor (GBA) refused to open an investigation into the airstrike that killed the Kilani family. According to human rights experts, the GBA’s decision violated standard procedure and abrogated a legal obligation under German law.

When approached by +972, the Office of the Federal Public Prosecutor declined to comment on their decision. But in 2021, in response to a December 2014 criminal complaint filed by the European Center for Constitutional and Human Rights (ECCHR) and the Palestinian Human Rights Commission (PCHR) regarding the killings, the GBA’s office justified its refusal to investigate by claiming that the evidence needed to conclusively determine whether a war crime had been committed was unobtainable.

In a statement on the GBA’s decision, published last month, PCHR and ECCHR argued that it demonstrated a clear double standard in cases against “powerful actors,” and represented the GBA failing to follow its own procedures as well as a “missed opportunity for applying international criminal justice…equally to all.” Andreas Schüller, a program director at ECCHR, told +972 that the organization “always demanded fair and equal treatment in this case, which is emblematic of civilian suffering during the war in Gaza in 2014.”

“The decision to not investigate the death of our family members despite the evidence of war crimes by the German Federal Prosecutor is politically motivated,” Ramsy said. “Propagandists often talk about ‘double standards,’ referring to the treatment of the state of Israel, and yes, there are double standards — in favor of Israel. Germany is legally obliged to investigate potential war crimes against its citizens. It is [refusing] to do so in this case because it was the State of Israel that killed our family members with German citizenship.”

Dror Dayan, an Israeli filmmaker whose 2020 documentary, “Not Just Your Picture,” which he made with French filmmaker and Activestills member Anne Paq, followed Ramsy and Layla’s struggle to get justice for the family they lost, told +972 that the GBA’s decision was saddening but in no way surprising. “This is just another part of Germany’s racist policy towards its Palestinian citizens and residents,” he said.

“This decision is inseparable from Germany’s actions on a parliamentary level, such as the ridiculous and non-binding anti-BDS resolution of the Bundestag, or on a local executive level, such as the extreme violence and aggression with which pro-Palestinian demonstrations are being banned and attacked, such as in Berlin.” 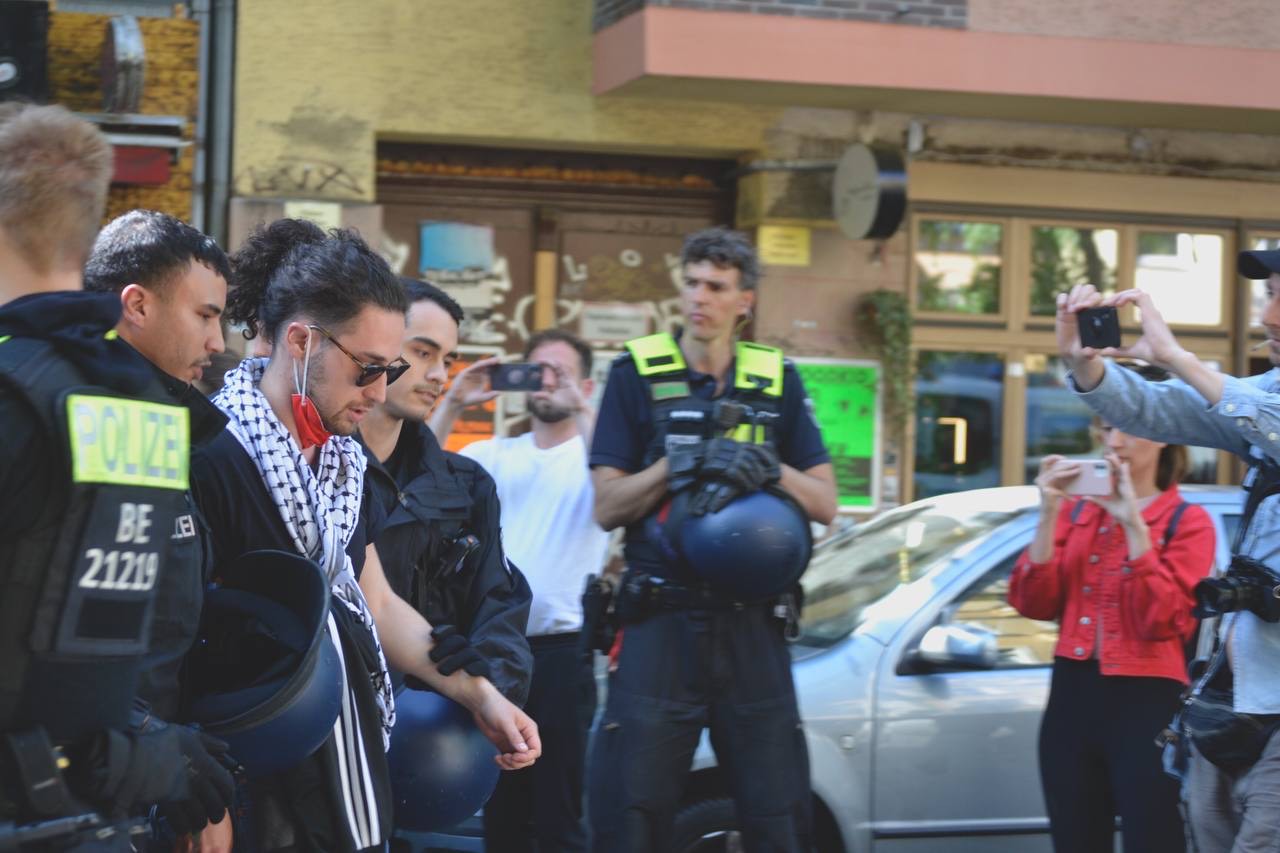 Berlin police arrest a Palestinian protester during a Nakba Day flash mob, after banning all commemorations of the day in the city. (@thequestionislysh)

Germany has been institutionally and culturally criminalizing Palestinian advocacy for many years. In 2019, the German Bundestag passed a resolution categorizing the BDS movement as antisemitic, effectively giving state institutions and pro-Israel groups license to attack Palestinian organizations, artists, academics, and individuals by restricting their access to public funds and public space.

In May, Berlin banned all Nakba Day protests that included vigils for the slain Palestinian-American journalist, Shireen Abu Akleh; over the course of the day, they arrested over 170 protesters and bystanders for participating, raising the Palestinian flag, or wearing a keffiyeh.

Phil Butland, a pro-Palestinian activist in Germany who has written about the Kilani family story, shares Dayan’s sentiments.

“Ibrahim al-Kilani was a German citizen who was murdered alongside his wife, five children, and four other relatives,” he said in an interview with +972. “The least that the German government could do is demand a public inquiry… We need a radical change in German politics to recognize the crimes being carried out against Palestinians.”

By comparison, Germany has previously allowed and protected demonstrations held and sponsored by the far right and neo-Nazis, including some within the past year.

“Instead of dealing with its horrific and murderous past, Germany is transforming it into anti-Muslim and anti-Palestinian hatred which allows it to present itself as a fighter against antisemitism while catering to a far-right mob and protecting and advancing its imperial interests in the Middle East,” Dayan said. “The only step for us to take as an international community is to show Germany that such steps will only further isolate it: its liberal mask is falling and Germany has to choose between human rights and apartheid Israel — it can’t support both.”

‘There is no German justice’

The case of the Kilani family, as well as that of Abu Akleh, demonstrate how little recourse there is for the surviving relatives of German citizens who find themselves victims of the Israeli state.

There is yet to be an independent investigation into Abu Akleh’s killing, despite multiple eyewitness testimonies and subsequent media investigations that pointed to Israeli forces having fired the fatal bullet. Although some members of Congress and Secretary of State Antony Blinken announced that the United States was deeply troubled by Abu Akleh’s death, experts such as Dror Sadot, spokesperson for the Israeli human rights organization B’Tselem, believe Israel will continue to kill with impunity so long as foreign governments do not hold it accountable. 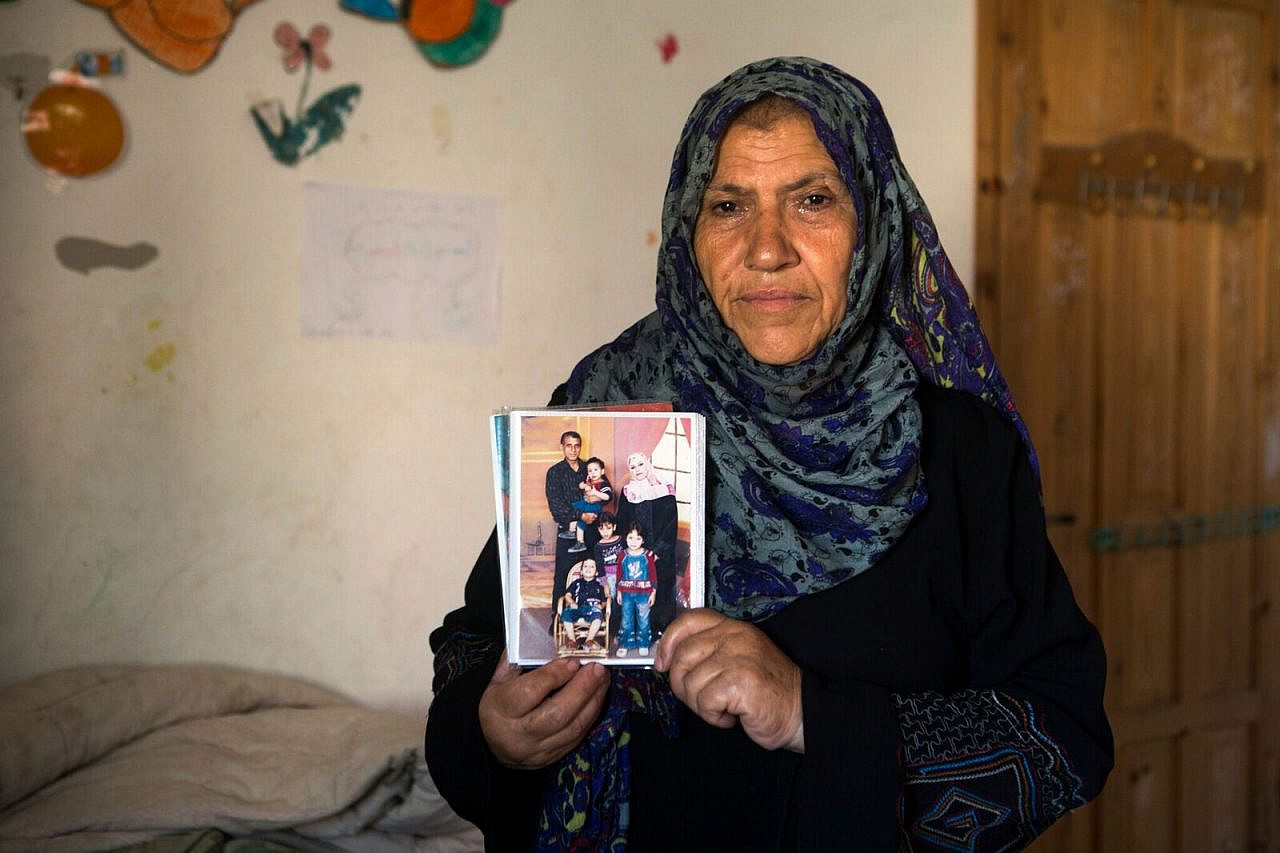 Khadija, Ibrahim Kilani’s sister, holds a photo of her brother and his family who were killed in an Israeli air attack in Gaza in 2014. (Anne Paq/Activestills)

“Israel is unwilling and unable to investigate itself, and that’s true in every case where Palestinians are killed,” Sadot said, adding that nothing will change “until the international community takes action.”

For German-Palestinian victims of Israeli aggression, the situation is similar, while also undermining their place in Germany.

“The [GBA’s] decision not to investigate [the killing of the Kilani family] sends a clear message to Palestinians in Germany that they are not equal in the eyes of the state,” said the makers of “Not Just Your Picture” in a statement they published on Twitter last month. “This should come as no surprise to anyone familiar with the political situation in Germany.

“There is no German justice, but through resistance and international solidarity, perhaps one day Layla and [Ramsy] could visit their family and the graves of their loved ones in a liberated and free Palestine for all.”

For Layla Kilani, the GBA’s decision not to investigate her relatives’ killing demonstrates Germany’s “indifference towards Palestinian lives with or without German citizenship. “We are saddened that after all those years, the killing of our family members is not only being concealed by the Israeli state, but also by the German state,” she said.