We have become as Gomorrah: Jewish legend attributes to the people of Sodom a series of barbarities. The act which supposedly sealed the fate of the city was this: a local girl gave aid to a beggar, contrary to law. Once this was discovered, the Sodomites tied her down near some beehives and smeared her with honey. According to legend, it was her screams which made Jehova say “I will go down, and see whether they have done altogether according to her cry”.

During the War of Independence (1947-1948) a Palmach officer, later to become a Chief of Staff, carried out a similar procedure. He tied down a Palestinian prisoner, spread honey over him and left him to the bees. The prominent journalist Nachum Barne’a, writing about the case decades later (while being very careful not to say the officer was Refa’el Eithan) wrote that this act caused the Palmach’s political officer, Benny Meharshek – no shrinking violet he – to break out in a bout of rage.

Rage or not, this did not harm that officer’s career. The career of Aryeh Biro, who oversaw the murder of Egyptian POWs, some of them bound, during the Sinai War of 1956 (Hebrew), was not harmed either; he reached the rank of brigadier general. The colonel who gave the infamous “Allah yerahmou” order prior to the Kafr Qasim massacre, Yiska Shadmi, was in fact forced to seek a second career earlier than expected, but managed to get out of the mess with a maliciously ridiculous penalty: a fine of ten prutot, one hundredth of a lira. Even when the IDF was forced to jail soldiers who murdered Palestinians, they rarely completed their sentence. In many cases, they were termed as “lunatics”. We now see (Hebrew) senior officers rushing to the aid of Lt. Col. Omri Burberg, who made his soldier fire a rubber bullet at a chained and blindfolded man; they say, preposterously, that while this is a “serious incident”, it does not “reflect on Omri as a commander”.

So the sentence, announced yesterday, of the two new war criminals of the Givati – who used a nine-years-old Palestinian child as a mine-detector – shouldn’t come as surprise. It’s traditional, after all. Turns out the two war criminals would be allowed to continue serving as commanders in the IDF, since you can’t trust the judgement of a soldier who used marijuana, but apparently you can trust that of a soldier who, in clear mind and in no pressing danger, decided to make such a use of a child. The only consolation is following this schtick, the military justice system will lose its ability to serve as a fig leaf, and Israel will no longer be able to seriously claim it investigates and judges such cases responsibly. One should also wonder why now, after the two have been convicted, the press refrains from publishing their names and faces. It’s unlikely it’s a censorship order, but it may be self-censorship on part of the press, trying to refrain from hurting the IDF’s feelings.

Woman officially to be marked inferior: The Supreme Court of Justice is expected (Hebrew) to accept the settlement of the Ministry of Transportation regarding the “mehadrin bus lines”. Those lines are busses operated by publicly-funded companies which, under heavy Ultra-Orthodox pressure, were divided into two parts: men sit in front, women in the back. The settlement merely states that the Court will allow this to continue, “without enforcement or violence”.

Sometimes you wonder just how disengaged are the Supremes. The Court allowed the security forces to lie to it blatantly for decades, lies which anyone could easily see through. Violence against women who refused to know their place on the “Misogyny lines” – a much better name than “mehadrin” – is a documented fact. The company which monitored the lines for the Ministry noted that in six out of 17 cases – i.e., more than 33% – its monitors were “asked/demanded to change their place, which they did in order to avoid confrontations with the local populace”. Or, to be more blunt about it, they gave in under threat of violence.

It’s not enough for the ultra-Orthodox, though. They now demand that the settlement – or, rather, surrender – will not be conditioned by lack of violence (Hebrew). That’s what happens when they feel they are victorious: during the early hearings, the haredim kept saying how the rabbis oppose violence. Now that victory is within reach, they start saying they can’t control “the fringe elements” and must not be bound to non-violence.

The whole demand rose out of the Orthodox concept that women are inherently impure and that the very presence of one may lead a man to sin; therefore they should have no part in public life, or, for that matter, in public, period. If the SCJ accepts the deal, as it seems it will, the pernicious doctrine of female submission will be publicly endorsed by the Israeli court system.

55 years after Rosa Parks courageously refused to move from the front of the Montgomery bus, Israeli women suddenly have to fight for that right – and this time the Supreme Court is on the side of the bigots.

The numbers Game: The IDF Spokesman keeps running psyops operations against the Israel public, specifically waving the non-existent scarecrow of “Shirkers” (mishtamtim). The latter are supposed to be Jewish youth who avoid their military duty. Which is an impossibility: one is either a defector, in which case he is hunted by the authorities, or he was lawfully discharged by the army. The imagined situation of people who don’t serve in the army because they don’t like to simply doesn’t exist. Those who don’t either have made a political deal allowing them not to serve or serve just a short period (the Ultra-Orthodox and the Orthodox, respectively), or has convinced the IDF their service would be detrimental to it.

Yet the army keeps dispensing the myth. Most papers published unquestioningly IDF data, according to which Tel Aviv is only the 53rd city in loyalty to the IDF. See, for instance, Haaretz (Hebrew).

But, as a good look at the photo will show (click here for full size), this would be false. The photo is the list of cities as published on Yediot Ahronot on Friday, and, being far too large, was necessarily cut. 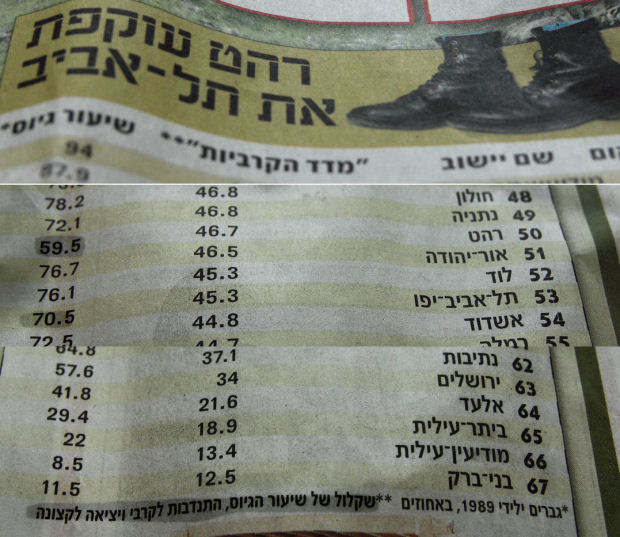 The IDF list, properly marked (Yossi Gurvitz)
Yediot’s headline is precisely what the IDF wanted it to be: “Rahat bypasses Tel Aviv”. Rahat is a Bedouin city of some 52,000. That, unfortunately, is a lie. The first column of data, the right one, is the “combativeness score”, which was concocted by the IDF out of a mix of “percentage of enlistment, volunteering for combat units and volunteering for the officer corps”. In this scale, Rahat gets a score of 46.7% vs. a score of 45.3% for Tel Aviv.

OMG! Are you telling me only 45.3% of Tel Avivians are drafted. No, not really. The data on the left column – the one I highlighted, the one the IDF had no choice but including but badly wanted people to ignore, which is why it reversed the order of the data – shows that the draft rate in Tel Aviv is 70.5%, while in Rahat it is only 59.5%. Has Rahat bypassed Tel Aviv? Only if you live in the alternate universe of the IDF, which that if you failed to go beyond the call of lawfully-required duty, you are somehow a despicable criminal. Furthermore, given that Bedouins are not drafted, but are allowed to volunteer for service, this plays havoc with the usual IDF data.

The IDF keeps mum, however, regarding Israel’s eternal capital: the draft score there only reaches 57.6%, way below Tel Aviv. But the IDF has no stomach for fighting the Ultra-Orthodox; they’re organized, nasty, and he’s trying to convince them to allow some of the yeshiva boys to volunteer. It much prefers spewing hate at Tel Avivians – those who, you know, keep it as a high-tech army. The IDF probably figures Tel Avivians are used to it: they’ve been Zionism’s favorite punching bag since the 1930s. The poisoned romantics of blood and land, so essential to Zionism, finds it hard to bloom in an urban climate. All those Hasbara efforts, trying to make Tel Aviv seem to be the best city of the Mediterranean? The high-tech capital? That’s strictly for export. In Zionist circles, Tel Aviv is a swearword.