The week commencing on Holocaust Remembrance Day and ending on Independence Day is when Israel is swept with unquestioning patriotism. But as hard as it may be, it is important to resist the temptation. 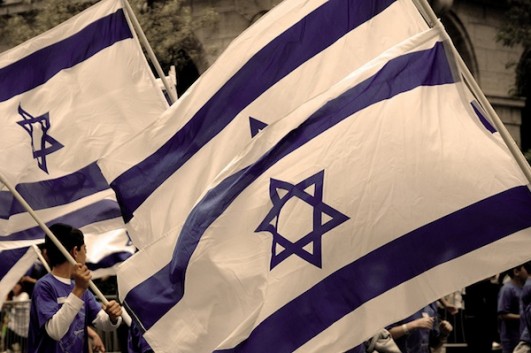 In last year’s Knesset elections, I voted for a left-wing party. This piece of information is enough for most Israelis to infer that I’m a vegetarian – no, vegan, actually – work for B’Tselem and have an Arab boyfriend. And the blue eyes that I don’t have are from my Ashkenazi father’s side.

But actually, except a poster of Meretz leader Zehava Galon hanging above my bed, I don’t meet any of the criteria. But I do like to moan, assuming that it helps my lefty credentials, and that’s what I plan to do now.

The week commencing on Holocaust Remembrance Day is a particularly tough one to pretend to be a lefty. The minute’s silence that makes me reflect on my dead grandmother is only a prelude to many a thought of survival, victimhood and vengeance. Look at us, I keep telling myself: the Jewish people defied this horror, and a self-sufficient Jewish state fought successfully for its survival – as a world-class “start-up nation,” no less.

There’s a right-wing demon sitting on my right shoulder, whispering all this in my ear. And my left shoulder remains bare.

Yes, I too was outraged by Lt.-Gen. Yair Golan’s speech. How dare he speak his mind on Holocaust Remembrance Day? How can he be so naïve not to know that he should keep his unpopular views to himself, and make do with praying at the Western Wall, speaking solemnly about ensuring Israel’s security and sucking up to the religious people? And only then, after we’ve swallowed that bill, push the hawk back into his hat and pull out a dove.

My bare left shoulder exposes our inability to stand up to the romanticization of the memory of the Holocaust. It’s not Gen. Golan who owes us an apology, but the entire collective memory that has accustomed us to an incredibly reductive expression of grief.

I’m still praying to win back Zionism. I still want Hatikva, Israel’s national anthem, and a blue-and-white flag at half mast to send shivers down my spine. I want every war to fill me with a sense of national unity and patriotism. But instead, irony creeps in.

It’s ironic that even though the racist intolerance of 1930s Europe snowballed into the Holocaust, those who speak against racism today are being accused of betraying its memory. It’s ironic that politicians vow solemnly to keep the memory of the Holocaust alive while doing nothing to ensure that the last remaining Holocaust survivors end their lives in dignity.

Casting doubt on Zionism is no mean feat. I envy my professors who do it effortlessly. They have a long track record of saying that the occupation corrupts; they say that the Nakba amounts to ethnic cleansing with the same ease that I discuss my craving for sugar.

I had a perfectly patriotic upbringing. I’ve always loved the State of Israel and believed in it. I was always sure I’d do anything for my country. I would look wistfully at the Israeli flag while singing Hatikva. Shaping one’s identity is a whole lot of work, but the current environment prevents me from letting myself be sucked by the sweet Zionist whirlpool.

I want Zionism to come back to me, like the rain does after a long heat wave. Because it’s fun! Unquestioning patriotism is fun! Things are so easy when you preach others to love the country and the people, ostracize those who disagree, change your profile picture to a blue and white flag and say the Chosen People are simply the best.

Despite the great temptation, I’d opt for an old-school kind of Zionism: less exclusive, less bigoted and more tolerant. My Zionism recognizes the need for a nation-state and therefore doesn’t deprive it of anyone.

Lev Yam Gonen is a Hebrew Literature and Political Science student at Ben-Gurion University of the Negev. She lives in Beer Sheva. This article was first published in Hebrew on Local Call. Read it here.