Over 150,000 sign petition calling on Airbnb to pull out of Israeli settlements as part of the #StolenHomes campaign, which was launched by a consortium of organizations following an investigative report by +972 and Local Call. 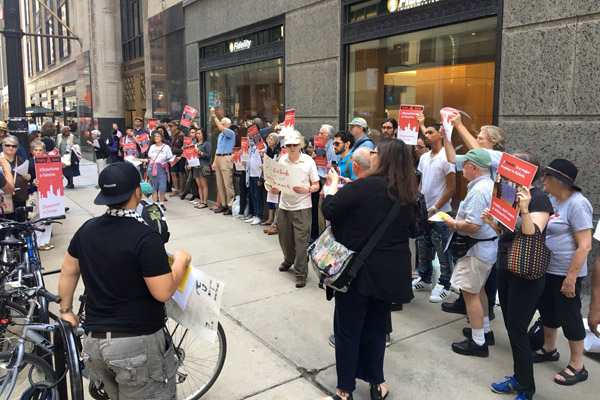 Protesters outside Fidelity Investment in Chicago demand that the company divest from Airbnb, June 3, 2016. (Courtesy of JVP)

A coalition of international organizations organized protests in cities across the world Friday against Airbnb’s operations in Israeli settlements in the occupied West Bank. In addition to the international actions, local popular committees of Palestinian villages and cities like Nabi Saleh, Bil’in, and Hebron also participated.

The protests were part of a global campaign, “Stolen Homes,” which was launched following an investigation published here on +972 and our Hebrew-language sister site, Local Call, which revealed that Airbnb allows Israeli settlers to rent out rooms and guesthouses to unsuspecting tourists without disclosing that they are located in illegal settlements in occupied territory. (All Israeli settlements are illegal under international law.)

Among the vacation properties available for rent on the site are a number in settlement outposts considered illegal even under Israeli law, some of which are situated on stolen, privately owned Palestinian land. The investigation also found that many property owners were discriminating by refusing to rent to prospective Arab guests, which violates company policy.

At Airbnb’s European headquarters in Dublin, campaigners boasted a petition signed by over 150,000 people, demanding that the company immediately stop listing vacation rentals in Israelis settlements. The campaign also targeted Fidelity Investment, a major investor in the company, demanding that it divest from it.

As people who care about human rights and international law, we ask Airbnb to immediately stop listing vacation rentals in Israeli settlements, all of which were built on stolen Palestinian land and deemed illegal under international law. Airbnb’s anti-discrimination policy states that they prohibit listings that promote racism, discrimination, or harm to individuals or groups, and require all users to comply with local laws.

“Hand-delivering the petitions and organizing protests sends a clear message to [Airbnb CEO] Brian Chesky and Airbnb that we’re not going anywhere,” explained Stefanie Fox, deputy director of Jewish Voice for Peace (JVP), which is one of several organizations behind the campaign.

“Airbnb has to stop enabling Israeli violations of international law,” Fox added. “Whether Airbnb has a physical presence or not in the West Bank, they are still profiting off it. It’s absolutely dirty money.” 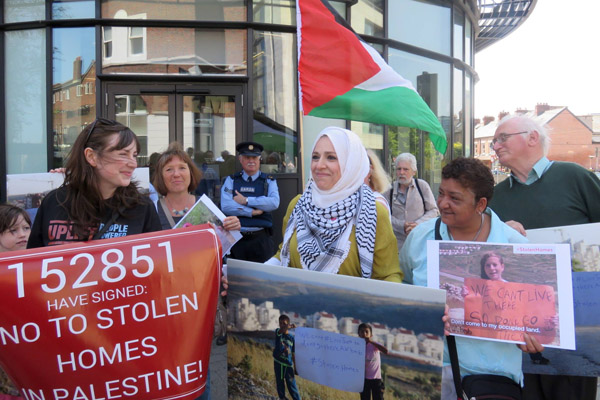 In the wake of the Local Call/+972 Magazine investigation, a Twitter campaign, #StolenHomes, began demanding that the company stop enabling the rental of homes and rooms in Israeli settlements. PLO Secretary General Saeb Erekat even went as far as contacting Airbnb CEO Chesky with similar demands. The company was also hit with thousands of negative reviews as a result of the activist campaign, which also included letters to Chesky.

Airbnb declined to respond to +972/Local Call’s request for comment ahead of the publication of our original investigation, but as the global pressure increased, the company told the Associated Press and others that it, “follows laws and regulations on where we can do business.” The company also claimed that it investigates specific violation of its anti-discrimination policy.

At the end of June the United Nations Human Rights Council is expected to publish a list of companies operating in West Bank settlements, and Airbnb is expected to appear on that list, perhaps adding to the international pressure it is facing.