The president’s high-profile interview with Jeffrey Goldberg will make it extremely hard for the administration to blame the Palestinians for the expected failure of Kerry’s peace initiative. 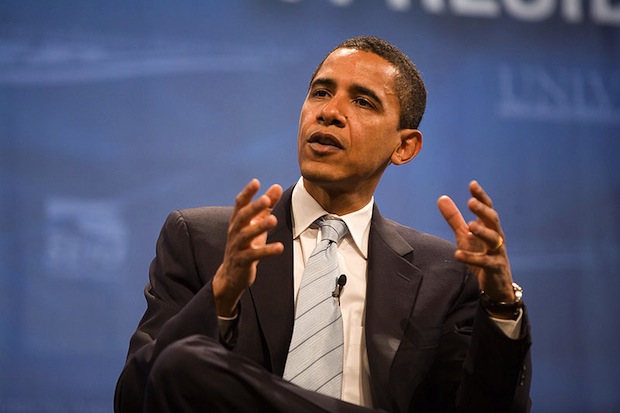 Obama’s interview with the Bloomberg news agency on Sunday, in which he basically blamed Netanyahu and exonerated Palestinian leader Mahmoud Abbas for the intractability of the occupation, is a very important event, and very good news. With Netanyahu and Abbas jockeying to avoid the blame for the likely impending failure of Secretary of State John Kerry’s peace initiative, the Obama interview with Jeffrey Goldberg will make it very hard for the administration to do Israel’s bidding, as is its habit, by pointing the finger at the Palestinians if and when the talks, whose allotted time runs out on April 29, run aground.

At stake in the blame game is momentum: if Washington finds against the Palestinians, Abbas’ plans to take Israel to The Hague would stall, as would the “mainstreaming” of the BDS movement. If Washington finds against Israel, the effect would be the opposite. And if Washington blames neither side, then the rest of the world will be left to decide for itself, and its decision will likely be for the Palestinians. In the probable event of the talks failing, Israel’s only hope of avoiding an upsurge of world opposition – which is what Justice Minister Tzipi Livni and Finance Minister Yair Lapid, along with top Israeli business people, friendly foreign diplomats, Kerry and now Obama are trying to warn Israel against – is if Washington clears Netanyahu of responsibility and turns its wrath on Abbas.

But how can Washington do that after what Obama just said in that interview:

I think nobody would dispute that whatever disagreements you may have with him, he has proven himself to be somebody who has been committed to nonviolence and diplomatic efforts to resolve this issue.

I believe that President Abbas is sincere about his willingness to recognize Israel and its right to exist, to recognize Israel’s legitimate security needs, to shun violence, to resolve these issues in a diplomatic fashion that meets the concerns of the people of Israel. And I think that this is a rare quality not just within the Palestinian territories, but in the Middle East generally. For us not to seize that opportunity would be a mistake.

[Y]ou’ve got a partner on the other side who is prepared to negotiate seriously, who does not engage in some of the wild rhetoric that so often you see in the Arab world when it comes to Israel, who has shown himself committed to maintaining order within the West Bank and the Palestinian Authority and to cooperate with Israelis around their security concerns — for us to not seize this moment I think would be a great mistake.

On Israel’s current approach to the conflict:

I have not yet heard … a persuasive vision of how Israel survives as a democracy and a Jewish state at peace with its neighbors in the absence of a peace deal with the Palestinians and a two-state solution. Nobody has presented me a credible scenario.

The only thing that I’ve heard is, “We’ll just keep on doing what we’re doing, and deal with problems as they arise. And we’ll build settlements where we can. And where there are problems in the West Bank, we will deal with them forcefully. We’ll cooperate or co-opt the Palestinian Authority.” And yet, at no point do you ever see an actual resolution to the problem.

It’s maintenance of a chronic situation. And my assessment, which is shared by a number of Israeli observers, I think, is there comes a point where you can’t manage this anymore, and then you start having to make very difficult choices. Do you resign yourself to what amounts to a permanent occupation of the West Bank? Is that the character of Israel as a state for a long period of time? Do you perpetuate, over the course of a decade or two decades, more and more restrictive policies in terms of Palestinian movement? Do you place restrictions on Arab-Israelis in ways that run counter to Israel’s traditions?

When I have a conversation with Bibi, that’s the essence of my conversation: If not now, when? And if not you, Mr. Prime Minister, then who? How does this get resolved?

On settlements and the consequences of maintaining the status quo:

What I do believe is that if you see no peace deal and continued aggressive settlement construction — and we have seen more aggressive settlement construction over the last couple years than we’ve seen in a very long time — if Palestinians come to believe that the possibility of a contiguous sovereign Palestinian state is no longer within reach, then our ability to manage the international fallout is going to be limited.

The condemnation of the international community can translate into a lack of cooperation when it comes to key security interests. It means reduced influence for us, the United States, in issues that are of interest to Israel. It’s survivable, but it is not preferable.

Even if, as expected, Kerry’s “framework agreement” for a peace treaty turns out to be tailored to Netanyahu’s demands, such that his coalition accepts it because it knows the Palestinians will have no choice but to turn it down, thus allowing Israel to “win” the blame game, I don’t see how the Obama administration can declare Israel the winner, not after what Obama just said in that interview. Such a declaration would have no credibility; it would be so obviously false as to embarrass Kerry and Obama.

I’m thinking that no matter who accepts or rejects Kerry’s framework agreement, Washington will not blame the Palestinians. The Obama interview is their insurance policy against that.  Or maybe, as Noam Sheizaf suggested, the situation is so hopeless that there isn’t going to be any framework agreement. Either way, Netanyahu and Israel come out looking like Goliath again, Abbas and the Palestinians like David, and the fight against the occupation gathers strength dramatically.

Read more:
An optimist’s case for the Kerry peace process
What does Kerry really think about his meetings with Bibi?
For the sake of peace, it is time to put an end to negotiations