After a three and a half year legal battle, Israeli NGO Gisha has obtained the state’s ‘Red Lines’ documents, which detail Israel’s severe restrictions on the amount of food that could enter the Gaza Strip between 2007 and 2010, including calculations of Palestinians’ caloric needs. 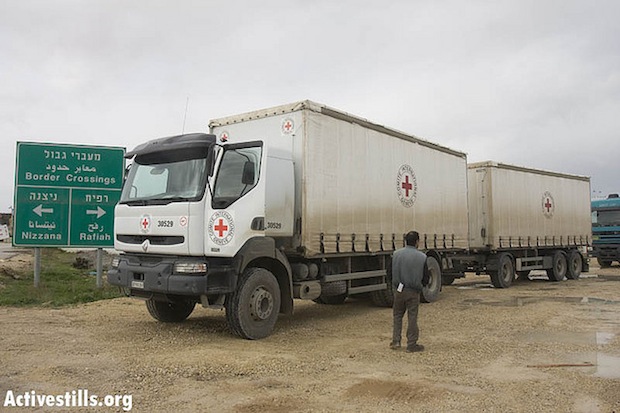 The “Red Lines” document was based on research compiled by the security establishment and the Israeli Ministry of Health, and aimed to “identify the point of intervention for prevention of malnutrition in the Gaza Strip.” According to Gisha, the document “includes tables calculating the food consumption needs of people in Gaza according to age and gender.”

The documents includes tables detailing Palestinians’ caloric needs according to age and gender. Following these calculations, as well as estimations of how much food is being produced inside of Gaza, the report concludes that Israel should allow 106 trucks a day into Gaza to supply Palestinians with their “daily humanitarian portion” of food, medicine, and other products. Between 2007 and 2010, however, Israel allowed an average of only 67 trucks a day to enter the Gaza Strip–falling far short of the recommended number.

Other Israeli governmental documents previously obtained and published by Gisha detail which foods Israel allowed into the Gaza Strip and which were forbidden. Among the prohibited products, Gisha reports, were “hummus, fresh meat and ground coriander.”

Israel lifted food restrictions on the Gaza Strip following the May 2010 flotilla incident. As part of a policy that Israeli officials call “economic warfare,” however, Israel continues to severely restrict exports from Gaza. The Israeli government also implements what it calls a “separation policy” between Gaza and the West Bank. Thousands of families have been split by this policy and Palestinian students from Gaza who wish to study in the West Bank are prohibited from doing so.

Although the media usually reports that the closure of Gaza began in 2007, the current blockade is the culmination of decades of movement restrictions that gradually shut the Gaza Strip and its economy down.

Restrictions on both imports and exports have been in effect since Israel occupied the Gaza Strip in 1967. By the time the First Intifada began in 1987, the local economy was crippled. In 1991, Israel began restricting Palestinians’ freedom of movement and many of those who worked in Israel became unable to reach their jobs. Sporadic closures of the Gaza Strip began in 1993, leaving Israeli employers feeling that they couldn’t depend on Palestinian workers and leading some employers to replace Palestinian day laborers with migrant workers from Eastern Europe and South East Asia.

A fence was erected around the Gaza Strip in 1995; students from Gaza who wished to pursue degrees in the West Bank were subject to a blanket travel ban in 2000. By 2005–two years before the blockade “began,” according to the Israeli government and the mainstream media–Israeli human rights groups were already calling Gaza “one big prison.”

The capture of Israeli soldier Gilad Shalit and the Hamas takeover served as excuses for the Israeli government to complete the closure of Gaza it had begun decades before. The “Red Lines” document suggests that the blockade of Gaza amounts to collective punishment and has little to do with security.

Read more: The blockade on Gaza began long before Hamas came to power