After being expelled and relocated in the 1950s, the residents of Umm al-Hiran are about to lose their homes once again – this time to make way for a Jewish national-religious settlement. 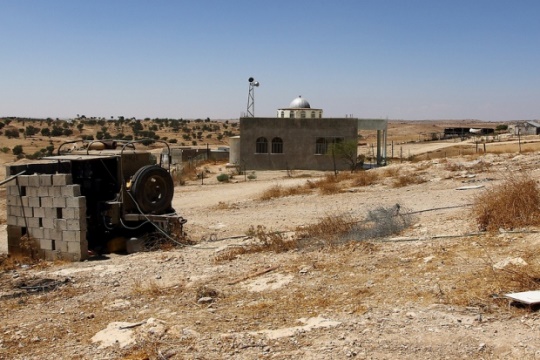 The Israeli government on Sunday made one of its most outrageous decisions in recent years (and there is no shortage of those, as you know). The cabinet held a special session in Sde Boker – the Kibbutz in which David Ben-Gurion is buried – to approve plans to build a new Jewish town (along with several others – all for Jews) in the northeast region of the Negev desert.

The symbolism of meeting at Sde Boker is clear: Ben-Gurion believed that the Negev is Zionism’s final frontier, and all Jewish pioneering effort should take place there.

There is no better example of how Zionism as a state ideology represents, in practice, the ongoing dispossession of Palestinians. Two Bedouin-Palestinian villages, Umm al-Hiran and Atir (where members of the Al-Qia’an tribe live), are the location where the kibbutz is planned.

Last year, Lia Tarachansky of the Real News produced a comprehensive video report about Umm al-Hiran and the Israeli government’s plans for it: 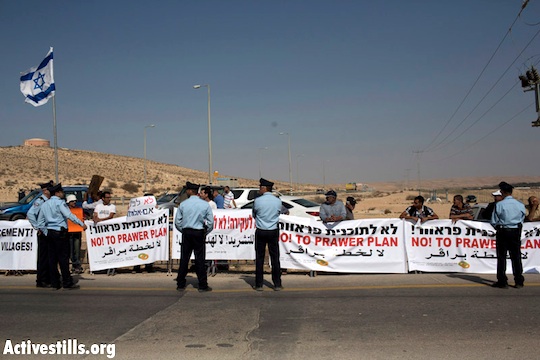 A demonstration outside Kibbutz Sde Boker against the planned demolition of two Bedouin towns to make room for a Jewish settlement in their place, November 10, 2013. The Israeli cabinet held a special meeting at the kibbutz to approve the plan. (Photo: Activestills.org)

Several dozen protesters gathered outside the kibbutz to protest the cabinet decision and displacement of the Bedouin villagers, who are all citizens of the State of Israel. Four were taken away by police, including former MK Taleb el-Sana. 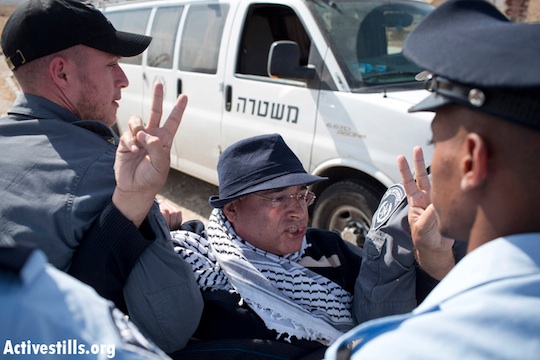 Police arrest former MK Taleb el-Sana outside Kibbutz Sde Boker during a protest against the demolition of two Bedouin towns to make room for a Jewish settlement in their place, November 10, 2013. The Israeli cabinet held a special meeting at the kibbutz to approve the plan. (Photo: Activestills.org)

Their residents are originally from the western part of the Negev (Palestinians call the same desert Naqab); they were expelled eastward by the IDF following the 1948 war, and a kibbutz called Shoval was built on their land. After several years of moving from site to site, the army finally told those members of the Al-Qia’an tribe to build their homes in Umm al-Hiran and Atir, and so they did in 1956. Here is the army’s order (via Adala). It is marked “confidential”: 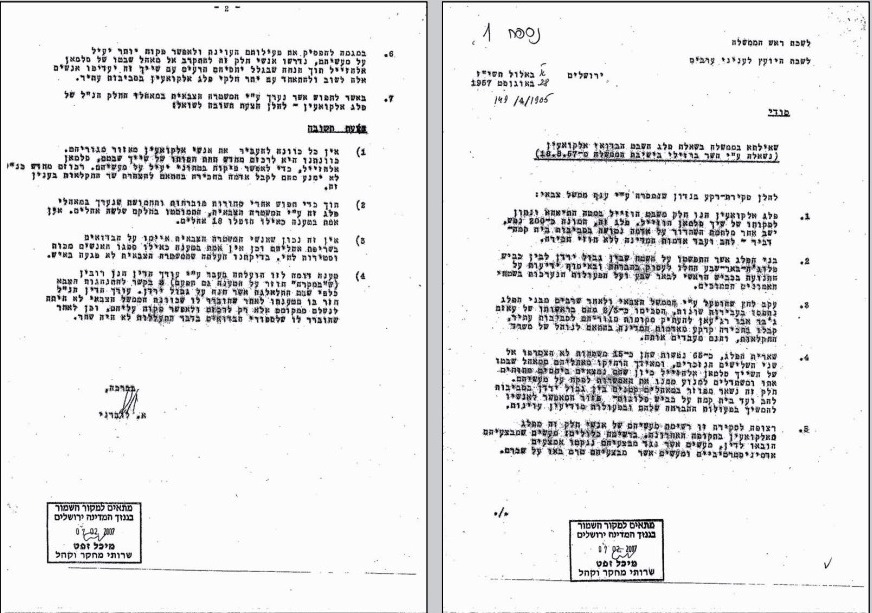 Despite the fact that it was the state who told the Al-Qia’an tribe where to move, the new villages were never made part of a zoning plan, and their residents still lack basic infrastructure like water and electricity. The government is finally deciding to build a proper settlement there – but not for the Palestinian Bedouin (who are citizens of Israel, some of whom even served in the IDF).

In remarks at the start of the cabinet meeting, Prime Minister Benjamin Netanyahu spoke about the new Jewish towns but did not mention the Bedouin who will be displaced to make room for them. The plan, he said, will “expedite the development of the entire Negev, which Israel’s first prime minister, David Ben-Gurion, very much wanted to do.”

A sign thanking the JNF-KKL for funding on a home for settlers of the future town “Hiran,” slated to be built on top of the unrecognized village of Umm al-Hiran (photo: Activestills.org)

The Bedouin residents of Umm al-Hiran will be pushed to the township of Hura, one of the poorest cities in the country, according to the socio-economic index of towns and municipalities. I suppose the government believes that things are so bad in Hura that its residents won’t mind another 500 refugees.

I visited Hura and Umm al-Hiran along with some other +972 bloggers last year – here is an account of that visit. Here is a video report on the Jewish group that is planning to settle on the ground as soon as the Palestinians are expelled. I will update tomorrow after the government’s decision.

Related:
+972’s ongoing report on the Prawer Plan and the attempt to displace thousands of Palestinian Bedouins.