facebook twitter email link
In the past, Israeli Prime Minister Benjamin Netanyahu has denounced the desecration and vandalism of mosques and Muslim cemeteries. But the destruction of Muslim religious properties in Israel is, in fact, institutionalized and has a long and sometimes shocking history 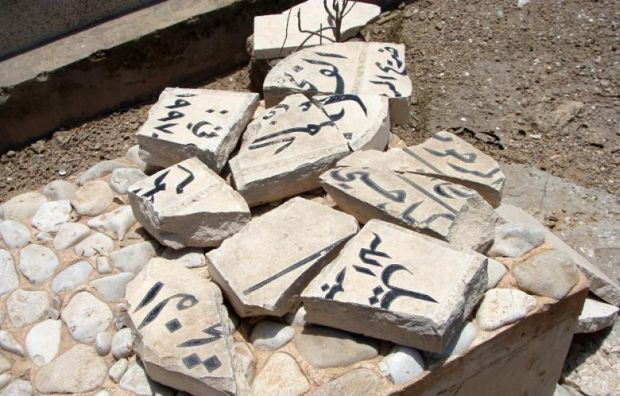 Jewish settlers torched a mosque near Ramallah, in the Israeli-occupied West Bank on December 15.

Earlier that week, Jewish rightists set fire to a mosque in Jerusalem. They scrawled graffiti on the walls reading “Mohammed is a pig,” and “A good Arab is a dead Arab.” Jerusalem Mayor Nir Barkat condemned the desecration of the religious site. Prime Minister Benjamin Netanyahu did the same in October when a mosque was burned in the north of the country.

“The images are shocking and do not belong in the state of Israel,” Netanyahu said.

When Muslim and Christian cemeteries were vandalized that same month, Netanyahu spoke out again—remarking that Israel would not “tolerate vandalism, especially not the kind that would offend religious sensibilities.”

But such statements belie the Israeli government’s long-standing attitude towards Muslim religious properties or waqf. Meaning literally endowment, waqf and income from waqf serves a charitable purpose for one’s family or community. Under Ottoman rule, waqf properties were exempt from taxes.

Following the 1947-1948 nakba, which saw some 700,000 Palestinians driven from their homes, Israel used its newly created Absentees’ Property Law to seize, among other things, waqf.

In Jaffa, alone, “There was a huge amount of waqf,” says Sami Abu Shehadeh, head of Jaffa’s Popular Committee against Home Demolitions and a PhD candidate in history. “I’m talking about hundreds of shops; I’m talking about tens of thousands of dunams of land; I’m talking about all the mosques…and there were all the cemeteries, too.”

Jaffa was renamed Yafo in 1948 and was annexed by the Tel Aviv municipality between 1948 and 1949. Most of the mosques were closed and several later became Jewish-owned art galleries.

In 2007, attorney Hisham Shabaita, three other Palestinian residents of Jaffa, and a local human rights organization, filed a lawsuit against the state of Israel, the Custodian of Absentee Property, and the Jewish Israeli trustees responsible for administering Tel Aviv-Yafo’s waqf holdings. The plaintiffs didn’t ask for the land back. Nor did they request compensation. They simply wanted to know what had happened to the properties, what their estimated earnings were, and where the money was going or had gone.

The court’s response? The information cannot be released because it apparently would embarrass the state, harming its reputation in the international community. The plaintiffs have filed an appeal and the case is expected to reach the Israeli Supreme Court.

But it’s not hard to guess what happened to the waqf properties, in part because the state admitted that all of the land had been sold. There are other clues: in the 1950s alone, the state demolished 1200 mosques. Later, the Hilton hotel, which stands in an area now known as north Tel Aviv, was built on a Muslim cemetery. Bodies were unearthed and relocated, stacked upon each other in a tiny corner of what was once a large graveyard.

There are also the forgotten corners, properties the state appropriated and then neglected. The Sheikh Murad cemetery, which dates back to at least the 1800s, stands between the South Tel Aviv neighborhoods of Shapira and Kiryat Shalom. Its headstones were smashed by vandals years ago. Bits of marble have been pried off the graves, presumably for use or sale.

Locals have dumped garbage on the grounds and, the last time I checked in on the cemetery—not long after Muslim and Christian graves were vandalized in Yafo—two men were shooting heroin under the shade of a pomegranate tree. Fruit rotted on the ground.

Abu Shehadeh says that the local Islamic committee is building a fence around the cemetery in hopes of protecting it from further misuse. He adds that only Palestinian collaborators with Israel, who are often relocated to South Tel Aviv, have been buried in the graveyard since 1948.

The Jewish neighborhoods Kiryat Shalom and Kfar Shalem both stand on the land of the Palestinian village Salame, which was established before the 1596 Ottoman census. According to Abu Shehadeh, a number of Muslim cemeteries were destroyed to make way to house the country’s new occupants.

And then there’s Jerusalem.

With the approval of the Jerusalem municipality, the Simon Wiesenthal Center is building a “Museum of Tolerance” on a Muslim graveyard. Excavations are taking place at the site, which has served as a been a parking lot for several decades now, and skeletons are being exhumed so that the Los Angeles-headquartered, “global Jewish human rights” organization can teach tourists a thing or two about co-existence.

Sergio Yahni of the Alternative Information Center, an Israeli-Palestinian non-governmental organization, explained that much of Jewish West Jerusalem is built on waqf.

“One of the most striking demolitions [on land designated as waqf,” he continues, “was made [in the Old City] during the 1967 war. [Israeli forces] didn’t take care [to see] if people were out of the houses…[in some cases] they brought the buildings down on people.”

Several Palestinians who disappeared from the Old City during the war were believed to be killed during the demolitions.

This occurred in the area adjacent to the Al Aqsa Mosque. Some eighty percent of the Old City’s Jewish Quarter is built on waqf.

Jewish Israeli leaders and journalists have expressed alarm at the recent rash of vandalism and arson. In light of the fact that the government itself has perpetrated such violence against Muslim properties for over 60 years, the surprise is misplaced, at best. At worst, it is a disingenuous attempt to relieve the state of its responsibility by pointing the finger at “extremists.”

This article was originally published in Al Akhbar.