This, essentially, appears to be the gist of the story of an encounter between an Israeli pick-up artist and a Czech medical student, published four years ago on the “success” forum of The Centre for the Arts of Seduction, an Israeli pick-up school.

[Click here to read this story in Czech with Google Translate; E-mail me if you can do a real translation.]

At the time, the story went unnoticed by critical eyes – on the contrary, it was met with hoots, cheers and praise by other users of the forum, among them instructors at the school. Last week, however, it was recently rediscovered, rapidly spreading across Facebook and the Israeli blogosphere. The indignation then spilled back into the real world: On Friday, I reported in Haaretz that three bloggers – Lihi Yona, Reut Cohen and Maayan Sudai, of “Reuma“- filed two complaints with the Israel police, one on rape and incitement to rape against the author of the story, who encouraged readers to follow his example  – and one on incitement to commit a felony and incitement to violence. The bloggers – all law students – say this is a precedent-setting complaint: Incitement to violence has up until now been interpreted as incitement to physical, not sexual, violence.

Here is the story itself, taking place, apparently, on 14 August 2006.  A user named “Roso” (his identity is now known to the police), begins by recounting how he met a Czech medical student in a supermarket somewhere in the Tel Aviv metropolitan area, though possibly in Haifa. He immediately launched into the series of manoeuvres taught at the course: Start up a conversation on whatever she is focused on at the moment (the bread shelf), put her down to crack her confidence (what do you mean you’re living in the hospital? Get a life!) and role-play: Telling her about a local dish (shakshouka), taking her around the supermarket to buy ingredients, and finally persuading her to get into his car and come to his flat. He encounters what the course terms LMR – Last Minute Resistance: “I’m sorry I can’t come with you, I don’t know you. You gonna kidnap me,” the student says, but Roso replies: “Listen I’m starving, we will just gonna go eat something, and I’ll take you back …we are not gonna have sex get in the car.”

When they get home, he proceeds into the “comfort phase”, showing her around the place, again trying to bring down her confidence by saying her she doesn’t know anything about art and that she misses that in her life, and talking to her about Feng Shui (“It’s great teaching them new things, they love it”, he boasts, meaning women.) He then opens a bottle of wine (“it creates attraction and crazy comfort”), despite her objections; “I pour her wine, who listens to girls.. you’ll understand what I mean later on…”

Then comes the critical “seduction” phase. The text is Roso’s, the bold is mine:

I tried kissing her with the mystery question, would you like to kiss me? She said no, I don’t know you. A stupid trick and I won’t use it again… I’ll just come over and kiss, and this is what I did afterwards, without asking, just taking her and kissing. This is what they want (don’t listen to them.”
“Things moved along… believe me, I came across countless objections on the way to close an FC (“Fuck close”), but I persisted and stayed consistent to the end. Okay we started making out on the bed and she just refused to take off her clothes and made all kinds of excuses… but I’m a blind rhino, she doesn’t know me. I used a quick seduction technique and it totally confused her, I took her hand and put it on my cock… slowly slowly I closed a BJC [Blowjob Close]. I thought I can stop there, but something inside told me not to give up, and Duracula’s contract was sitting on my head. I didn’t give up and continued being consistent to the end. I tried taking off her panties and the girl just wouldn’t! And then I thought, do I go for freeze out or quick seduction? I moved her panties to the right, and bang! The girl is stunned and so am I, actually… after that everything went fine, the clothes went off and the FC was closed.

Roso treats us to “summary and insights.” Among other things, he writes:

* Orders. A girl is a confused creature with a lot of feelings. She’ll do anything you tell her in this confused state.

This is my personal success story and I want to thank the Art of Seduction Centre for giving me the instruments to do what I did yesterday – so Roman, Yigal, Tal, Dan and Stas my friend, thank you very much!

In his official comment for my Haaretz report, the Center’s founder Yigal Shtark wrote:

“The story for which you sent the link does not reflect neither our approach nor the conduct and values we educate to in our workshops.”

However, the first comment after Roso’s tale, Shtark himself writes: “It’s fun to read!” and another forum manager, Duracula – the same Duracula whose influence Roso credits with giving him the determination to go on – writes: “By the book, of course. Great job.”

Among the cheers stand out two users who meekly, hesitatingly, raise the R word.

“I don’t want to sound like [feminist columnist] Billy Moskuna-Lerman,” writes the first, “but at the end of every line I read I could smell only one word – rape. I’m sure she won’t run to police after the FC, but how am I supposed to know I’m not doing something prohibited, when she’s saying ‘no’ and I insist…”

Shtark replies: “There are safety rule that allow the girl to stop at any moment, so that it won’t be a rape. Roso was briefed in detail by our lawyer at the course.”

Shtark did not respond to my request to clarify the discrepancy between these comments and his official response.
Lihi Yona, who filed the complaint with Haifa police, said that “there is definitely a suspicion of rape, incitement to violence, and incitement to rape.”
“It’s clear from the original message that the tactic he uses, in which when a woman says ‘no’ she means ‘yes’, no matter what she wants, is something he got from the course. He also says he wanted to stop, but peer pressure got him to go on.” Haifa police is investigating, though no arrests have so far been made. 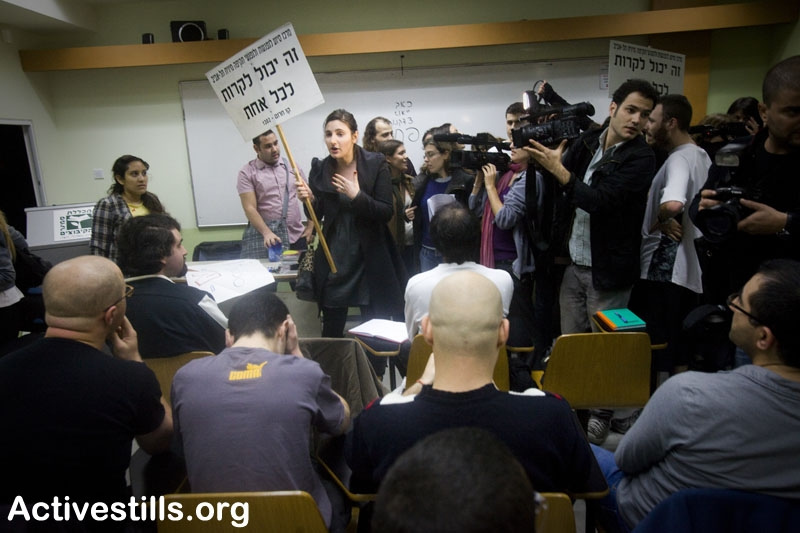 The revelation of Roso’s story provoke a massive backlash not just because of this particular incidents, but against the attitude of the centre in general, and its practice of live training: Apparently, many women avoid the area of the popular Dizengoff Center mall in Tel Aviv, because this is where the trainers take out their trainees to “practice” – get 30 phone numbers in one hour, for instance; you can read a first hand, if over-enthusiastic, report by a Haaretz journalist who joined one of the courses here.  (On a personal note, this particular complaint brought home to me how different and privileged male geography is over female, even in broad daylight and public places: I’ve lived in Tel Aviv for most of the past decade, I’ve been to the same mall very often, and I never had the slightest idea that anything like that was going on.)

The backlash also resulted in a sizeable demonstration outside a recent course alumni meeting , with some 150 protesters – women and men – eventually breaking in and confronting the instructors face to face. After some initial confusion, this turned into an alternative teach-in:

Apart from the protest, the affair provoked a flow of fascinating commentary in the Hebrew blogosphere, but before I get to that, I have a request for help:

If any of the readers here speaks Czech, please translate the story up to this point and send it to Czech journalists together with this blog’s contact email – dimis.notes [at] gmail [dot] com. It’s absolutely essential for the case to proceed – whether to conviction of acquittal – that the victim in Roso’s tale is made aware of the story’s publication and the police complaint.

Recommended  reading (all in Hebrew, I’m afraid, but you can try Google Translate):

Screenshots of the original discussion (the forum has since been blocked)

Stas, a former trainer at the course, offers a video response

Why sexual harassment is a men’s problem, too – Nimrod Avissar