TheMarker journalists toy with statistics to reverse the correlation between cause and effect, portraying unions, once again, as protectors of the privileged.

TheMarker, Haaretz’s economic supplement (which over the last several years has gained a life of its own), is at it again. A report and corresponding article (only the latter of which made it online in Hebrew) published Tuesday take a look at a recent survey by the Central Bureau of Statistics on organized labor in Israel. The survey shows that the more stability workers enjoy at the work place, the higher their wages and the more collective bargaining agreements they have protecting them, the likelier they are to be represented by a union. Workers with lower pay and worse working conditions (those who more easily be made redundant) are less likely to have a union taking care of them. And what does TheMarker make of this? That unions are only there for the strongest of workers, while neglecting the rest.

Indeed, a marvelous piece of trickery if I’ve ever seen one. It probably didn’t occur to the economic correspondents and commentators in the liberal newspaper that the act of organizing, unionizing and signing collective bargaining agreements bring about those better working conditions. “Hardly one in ten of the working poor enjoy union representation,” protests columnist Tali Heruti-Sover, who blames the unions for assisting only those who are already well off. Might not these figures indicate the opposite? That once workers organize it is the role of the union to make sure that they do not remain poor? 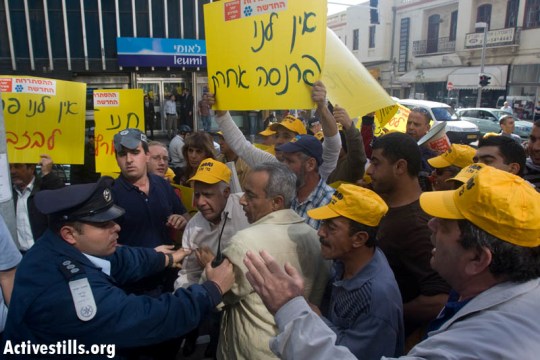 The Marker journalists toy with statistics to reverse correlation between cause and effect, portraying unions once again as protectors of privilege (Activestills)

Outrageous though it may be, TheMarker’s position should not come as any surprise. Time after time after time, the paper – probably the single most successful in Israel – has taken a stand against the ongoing struggle of unions in Israel (which have grown more powerful in the past two years) to protect workers rights in an age of privatization. Unions in Israel are also noted for protecting the shrinking public sector and protecting workers against the constant threat made by employers to take their money elsewhere should tax regulations and labor laws not suit them.Both the public sector (nicknamed the “state monopoly”) and unions often find themselves listed alongside the “tycoons” (the several ruling capitalists/oligarchs ruling the Israeli economy) as the two largest problems limiting of the growth of the local market.

While the paper sometimes does take a stand to support workers in the initial stages of organizing, it never goes much further than that. As a friend of mine recently commented: “this has been TheMarker’s editorial line for the past two years – unions are great until you actually gain something. From then on you’re a scoundrel.”

Further reading:
May Day: The revival of Israeli organized labor in the post-J14 era