Clinton campaign chairman Podesta writes to his daughter that Haim Saban and Danny Abraham ‘would not be with her if she wasn’t totally committed to Israeli security.’ 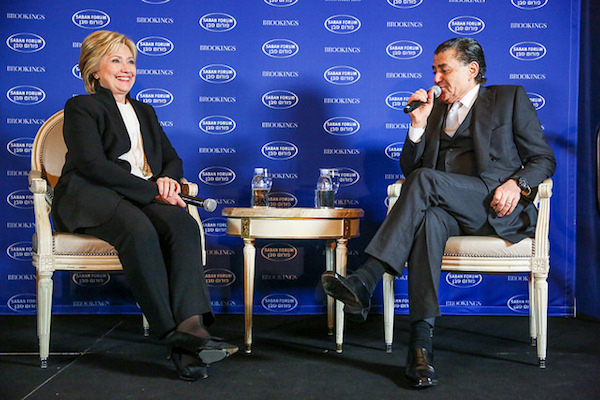 In a hacked email released by WikiLeaks on Wednesday, Hillary Clinton’s campaign chairman, John Podesta, answered an innocent question from his daughter with a revealing answer about what motivates two of Clinton’s biggest supporters to stand by her candidacy: Israel.

I’ve heard a concern from some folks who care deeply about Israel that Hillary will be the president “most unfriendly to Israel in our history, worse than Obama.” Thoughts on how I might respond in conversation?

Opponents of Hillary Clinton and groups supported by Republican megadonor and Trump supporter Sheldon Adelson have consistently attempted to paint Hillary Clinton and Barack Obama as unfriendly to Israel due to their opposition to settlement expansion in the West Bank and their support of the Joint Comprehensive Plan of Action (JCPOA), a 2015 diplomatic agreement which constrains Iran’s nuclear program.

That’s a bit crazy. Obama developed a real feud with Bibi, but she has been a staunch defender of Israel since her Senate days. Probably her very best supporters are Haim Saban, and Danny Abraham who would not be with her if she wasn’t totally committed to Israeli security.

Podesta’s acknowledgement that two of Hillary Clinton’s key donors condition their support on her support of Israel’s security is a striking moment of candor from Podesta, but a statement which is consistent with her previous actions to placate the concerns of her biggest financial backers.

Previously leaked emails showed Clinton’s team coordinating with Saban, Clinton’s top donor, to leak a letter expressing her opposition to Boycott Divestment and Sanctions (BDS), a campaign to apply economic and political pressure on Israel to end the Israeli occupation of Palestinian territories.

I see zero downside to a story. Then we can circulate around right away (hopefully) in advance of Iran.

(Presumably, Mook’s reference to “in advance of Iran” regarded the upcoming finalization of the JCPOA on July 14, 2015, and/or Clinton’s support of the agreement.)

If Haim’s going to give it to the Jewish media, I think that solves our problem. Once they write, we can make sure it gets picked up by some of our beat guys.

Clinton and Saban haven’t always seen eye-to-eye. Last December, Clinton defended the Iran nuclear deal at an event moderated by the billionaire at a Saban Forum event at Brookings.

Saban initially opposed the agreement but later shifted his position, accepting the JCPOA as a “fait accompli” and “a done deal” in an August, 2015 email to The New York Times’ Julie Hirschfield Davis.

But the close coordination with Saban on matters related to Israel, his key concern according to Podesta, appears to have paid off handily for the Clinton campaign.

In August, Saban hosted a $5 million fundraiser for Clinton, one of the biggest fundraising hauls of her campaign. And Saban, alongside his wife, are the biggest donors to the pro-Clinton Priorities USA super-PAC, having contributed at least $10 million to date.