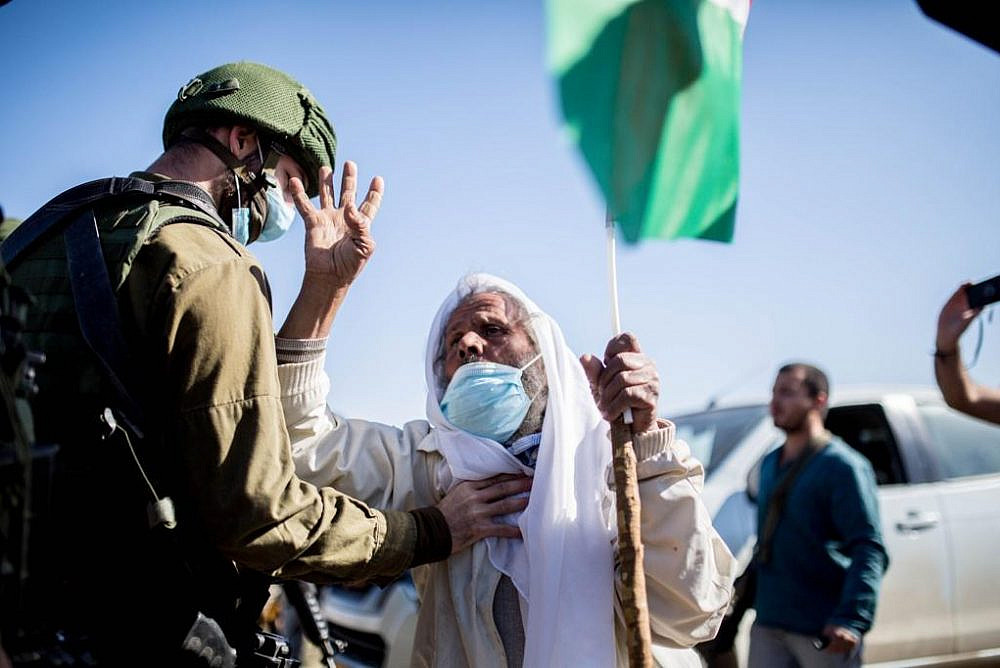 On the afternoon of January 5, the Israeli occupation forces entered the Palestinian village of Umm al-Khair in the Masafer Yatta region of the South Hebron Hills, where we live, to confiscate unregistered Palestinian cars. An elderly man from the village, Haj Suleiman al-Hathaleen, tried to peacefully prevent them from leaving with the cars, when an Israeli police tow truck ran him over, causing severe injuries throughout his body. He is lying in critical condition in the hospital, closer to martyrdom than to life.

There are many well-known policies used by the Israeli occupation to displace Palestinians from our villages in Masafer Yatta, including by declaring a military firing zone on the land of twelve villages, and even invoking Ottoman-era laws to confiscate Palestinian-owned land for Jewish settlements. But lately, it seems that the policy of “breaking bones” — a strategy infamously promoted by then-Defense Minister Yitzhak Rabin during the First Intifada — has once again become a central method to displace us and to crush any hope of Palestinian popular resistance.

Haj Suleiman is an anti-occupation activist in his late 60s, who we have known our whole lives. Every time we go to his house in Umm al-Khair, he greets us with a cup of tea and a smile. Everyone in the South Hebron Hills knows him well — especially the Israeli occupation soldiers.

While Suleiman was peacefully resisting the confiscation of his neighbors’ cars on Wednesday, the Israeli police truck ran over him and dragged him for ten meters while he was caught underneath it. The police, however, simply left the scene of the crime, with Suleiman lying on the ground, bleeding and critically injured. His neighbors were the ones who called the ambulance, and he was transferred to a hospital in Hebron. 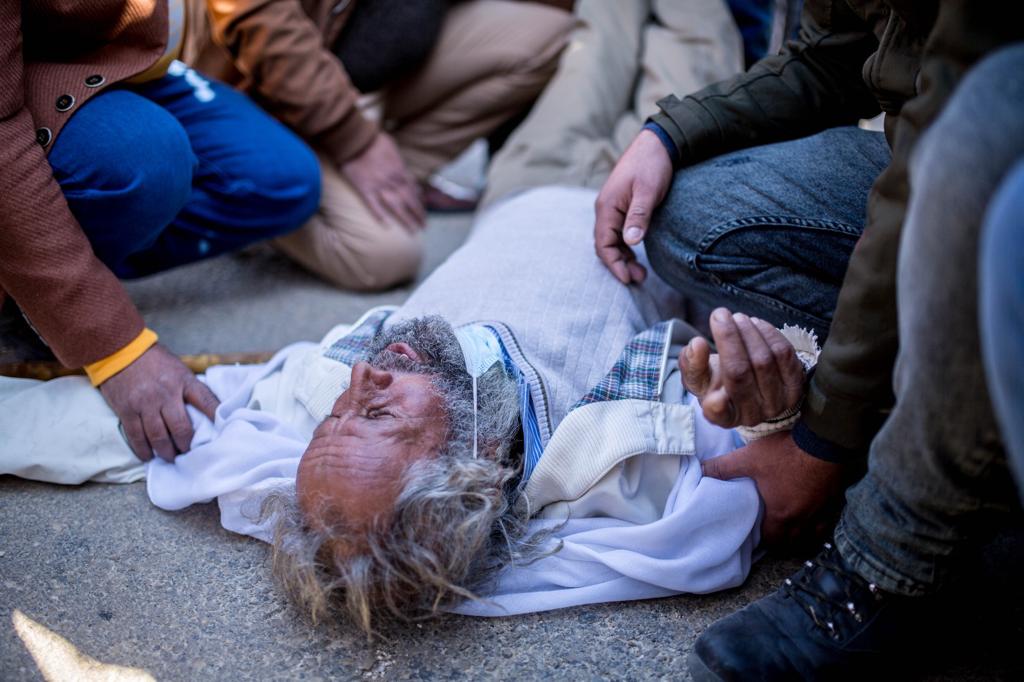 Haj Suleiman Hathaleen on the ground after altercations with Israeli soldiers during a protest in Masafer Yatta in the South Hebron Hills, West Bank. (Emily Glick)

The doctor reported that Suleiman had two fractures in his skull and others in his neck, chest, ribs, and pelvis; severe bleeding in the brain and abdomen; and injuries to his spleen and intestines. We, along with the whole community of Umm al-Khair and all of Masafer Yatta, are suffering from great shock and grief, praying for him to hang on to life.

Suleiman and his family are Palestinian Bedouins who arrived in Umm al-Khair to start a new life after they were displaced from the Naqab/Negev by Zionist forces during the Nakba in 1948. Their world changed once again after Israel occupied the West Bank in 1967, and in the 1980s, the settlement of Carmel was built directly on his village’s lands. There are less than ten meters between Suleiman’s home and the houses of the Jewish settlers; a barbed wire fence separates a life with all the luxuries of the 21st century from a life that lacks the most basic necessities.

Following the Oslo Accords, the village of Umm al-Kheir was classified as part of Area C, placing it under full Israeli control. Since the Civil Administration — the arm of the Israeli military that governs the occupied territories — refuses to grant permits to Suleiman’s community to build any kind of house or shelter on their own land, all the infrastructure here is deemed illegal.

As a result, the occupation authorities have repeatedly carried out demolitions against homes and structures in the village. From the west, the housing and agricultural projects of the Jewish settlement are allowed to expand; to the east, any development in Palestinian Umm al-Khair, with its rugged road and scattered tents, is either destroyed or threatened with demolition. 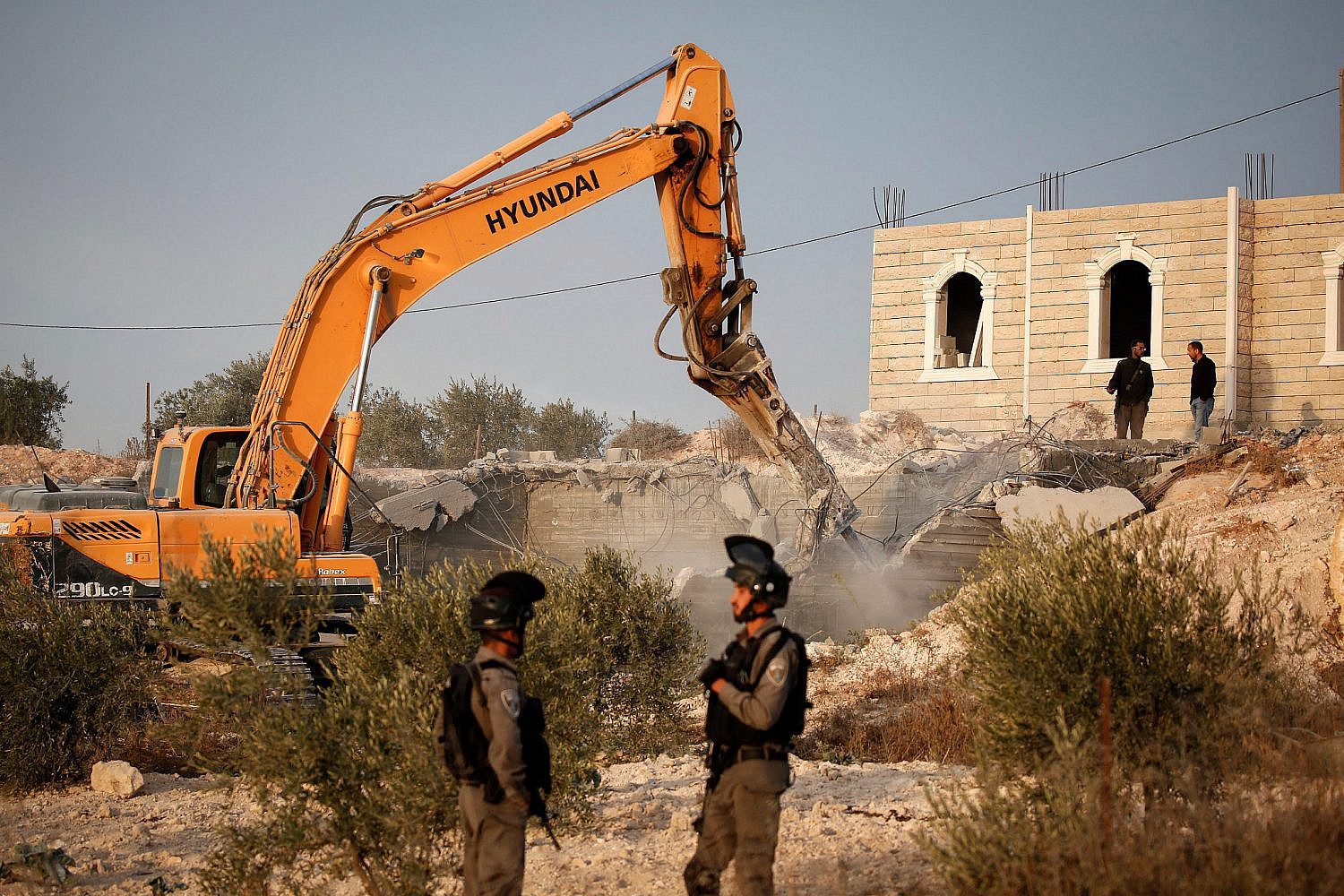 This situation prompted Suleiman to become an activist decades ago, not only in his own village, but in the neighboring villages as well. He is known for resisting through civil disobedience, carrying the Palestinian flag and standing in front of the Israeli bulldozers that destroy children’s homes. With every military intrusion or demolition, he stands with his shepherd’s stick in defiance of the occupation’s machines, becoming a special and prominent Bedouin icon.

Almost every time, Israeli soldiers respond to Suleiman with violence. He has been arrested many times and, even before this latest incident, was hospitalized after 20-year-old soldiers and Border Police shoved him to the ground. It is likely that because of his ongoing resistance, Suleiman — whose seniority should allow him to obtain a permit to enter Jerusalem through Israeli checkpoints — is prevented from obtaining one in order to pray at Al-Aqsa Mosque.

What happened to Haj Suleiman last week could happen to either of us, or to any of our family or friends living in Masafer Yatta. We live in the midst of constant danger. At any time while going about our daily routine, we could end up losing a limb or paralyzed for life. Every time harm is inflicted on the body of any one of us, we always imagine ourselves in their place. We feel no different from those who have been injured and disabled. We, too, live through what they experience: direct and daily confrontation with the occupation.

Suleiman is not the only Palestinian in the South Hebron Hills whose bones were shattered by the occupation this past year. Since January 2021, the violence of the Israeli occupation has directly resulted in short-term and long-term disabilities for at least three other people from different villages in the area. 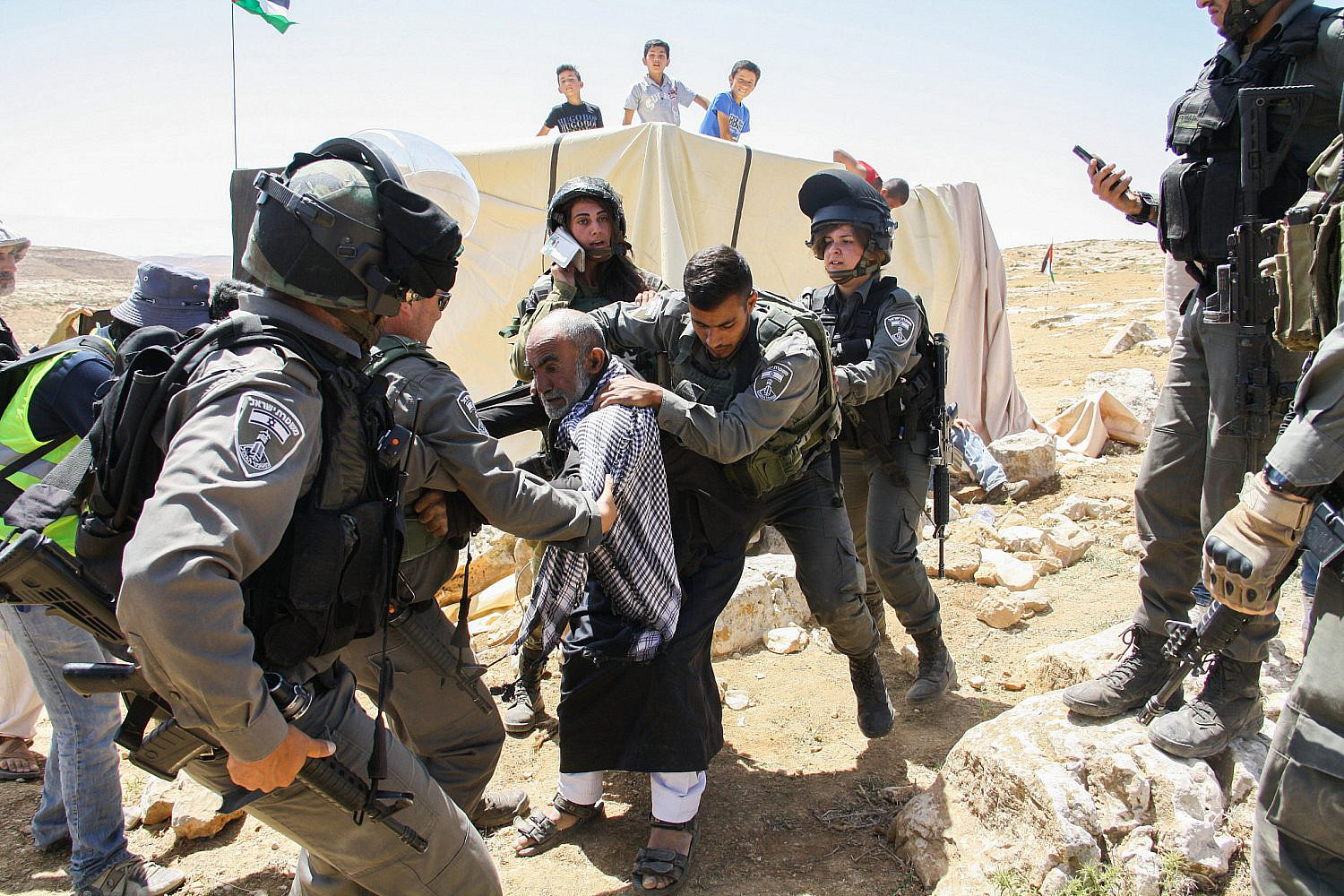 Israeli Border Police officers arrest a Palestinian man at the Surora village near the West Bank village of Yatta, south of Hebron, May 25, 2017. (Wisam Hashlamoun/Flash90)

On the first day of January last year, Israeli soldiers shot and wounded 26-year-old Harun Abu Aram in the neck during a scuffle over the army’s confiscation of an electricity generator from Harun’s neighbor. In an area that is denied all basic services, such a generator is a source of life for Harun and his neighbors. As the video of the shooting shows, Harun was trying nonviolently to stop the confiscation of the generator. The soldier’s bullet left Harun completely paralyzed from the neck down.

Here in Masafer Yatta, you don’t need to be at the scene of an army or police incursion to lose a limb — it can also happen during a routine day out in the fields. On January 8 last year, 18-year-old Mohammad Makhamra from the hamlet of al-Mirkiz was running to follow his flock of sheep just one hundred meters from his home, when he stepped on an unexploded bomb left by the Israeli army. The resulting explosion caused fracturing in his right leg, propelled shrapnel to within millimeters of his heart and stomach and, worst of all, caused him to lose one of his hands.

Having your skull smashed can also happen while you’re at home, even if you are a child lying in your bed. During a pogrom carried out by settlers in the village of Mufagara in September, a four-year-old child, Muhammad Hamamdah, was struck in the head by a rock thrown through the windows of his room by a settler while he was sleeping, fracturing his skull. This took place in the presence of Israeli soldiers who fired tear gas and stun grenades at the Palestinians and who even arrested several residents instead of stopping the settlers’ attack, which included stabbing and killing goats, smashing windows of homes and cars, and injuring other residents.

Although the safety and security of the occupied people are supposed to be the responsibility of the occupying power, there is clear recklessness on the part of the Israeli forces toward the Palestinian people. Israel has declared our villages to be a firing zone, and soldiers regularly use live ammunition which systematically injures children and adults to the point that they become permanently disabled. 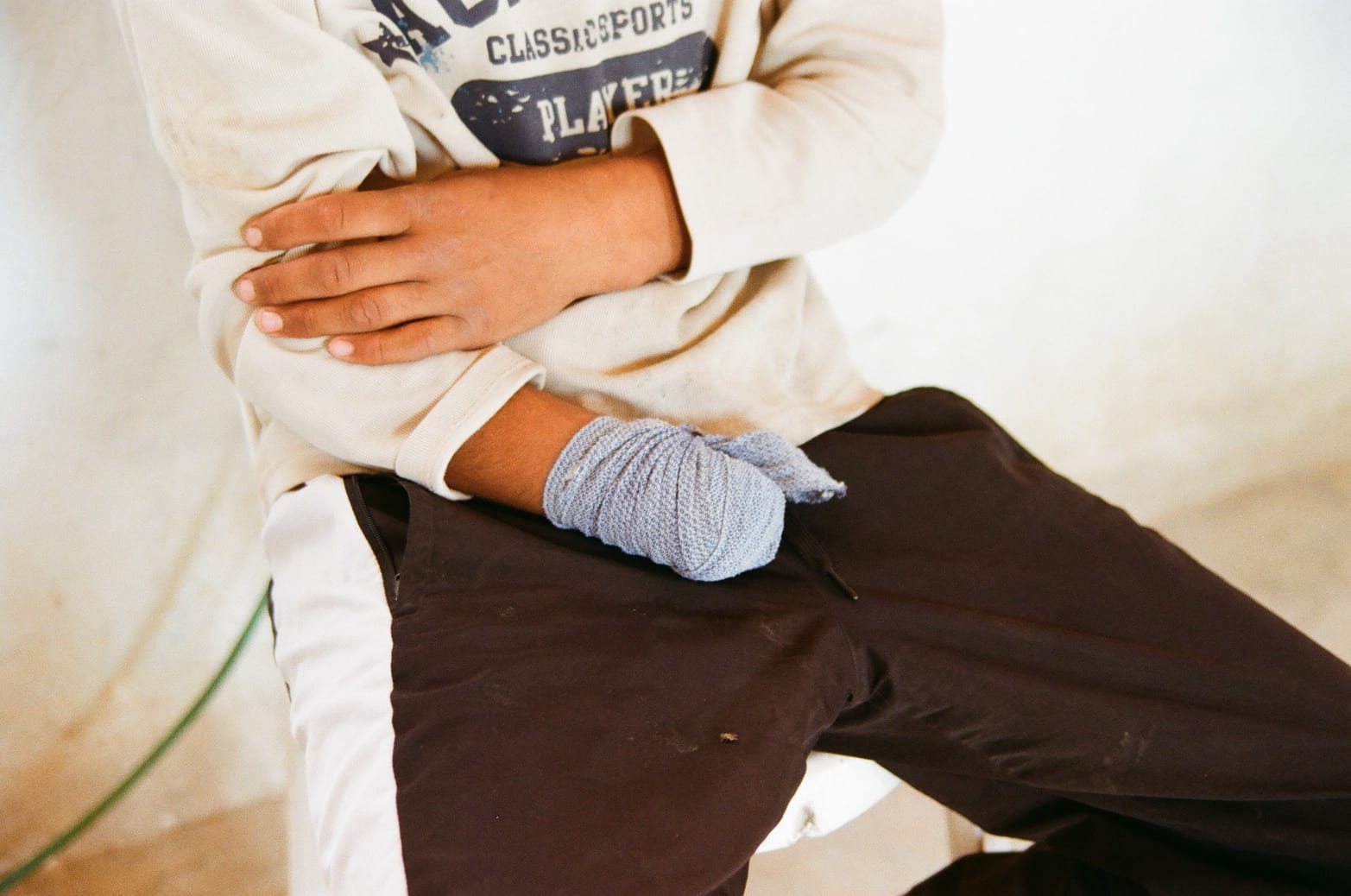 Mohammad Makhamra, who was wounded and lost his hand from an unexploded Israeli bomb, at his home in al-Mirkiz in the South Hebron Hills, West Bank. (Kochav Shachar)

In every one of these incidents — Harun Abu Aram, who became quadripelegic; Muhammad Makhamra, who lost his hand; and Muhammad Hamamdah, whose skull was fractured — the Israeli authorities quickly closed the case without prosecuting anyone.

Similarly, in last week’s hit-and-run on Haj Suleiman, the Israeli police dismissed any responsibility, claiming that he had “sprinted toward the tow truck” in the midst of a “violent riot,” and that because an “agitated mob tried to cause real harm to the force, it was impossible to stop and assist the injured person.”

The Israeli army, police, and settlers all work together and systematically to ethnically cleanse us from our land. All of these policies are in violation of international law and international agreements that are meant to safeguard our human rights. We should be feeling safe in our own homes and communities, but the occupation is designed to deprive us of even that most basic right.