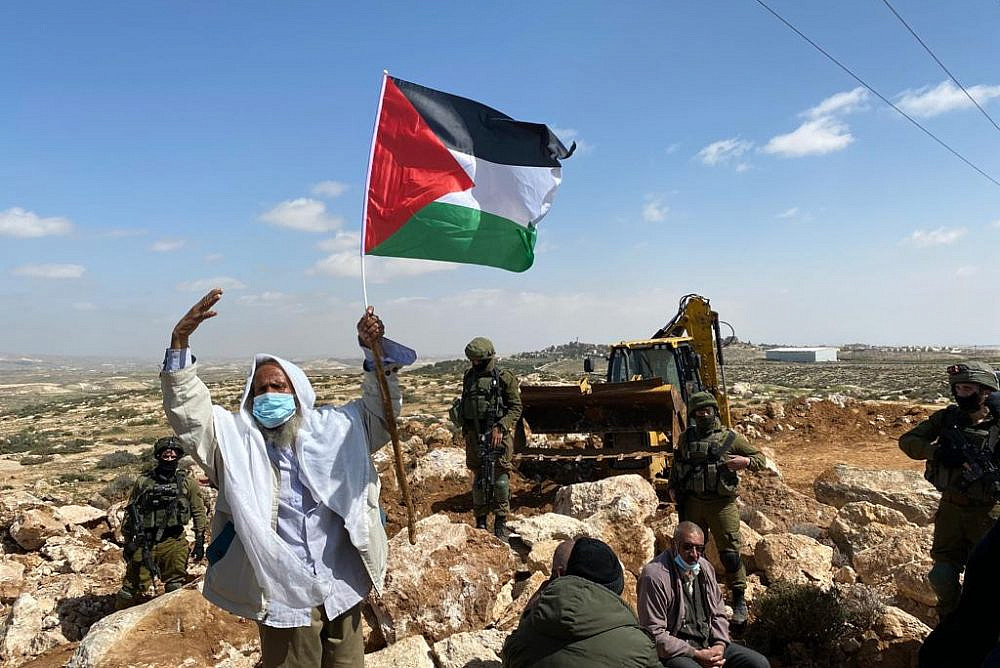 Haj Suleiman from Umm al-Kheir, one of the West Bank villages that grazes in the area of Ein al-Beida, protests Israeli settlement development, March 8, 2021. (Natasha Westheimer)

Life in Umm al-Khair feels darker since the death of my uncle, Haj Suleiman al-Hathaleen. A lifelong activist and respected elder, Haj Suleiman was the light that illuminated the way for many of us living in the South Hebron Hills in the occupied West Bank. But in early January, an Israeli police tow truck, while raiding our village to confiscate unregistered cars, crushed my uncle as he tried to peacefully stop them; the police simply drove away, leaving him to his fate. He died in hospital several days later from his wounds.

His martyrdom has left a great emotional void here in our small village, and indeed throughout Masafer Yatta, where eight of our neighboring communities are facing imminent demolition after the Israeli High Court approved their expulsion earlier this month. Particularly in this dangerous moment, his death represents the loss of a defender of our people who brought his characteristic nonviolent resistance to all spheres of our life. In truth, we are finding it hard to maintain our resistance: we have not found another person who can do what Haj Suleiman did for us, and I do not think that we will. We have lost a core source of hope for a better future.

We in Umm al-Khair were so accustomed to Haj Suleiman’s presence and the way he cared about each of us and our problems. He taught us to be courageous and unafraid. But right now, we are very afraid. Hardly any of us have been able to sleep properly since he was killed, but it has been even worse since the High Court’s ruling. I am scared every time I hear news of another raid by Israeli soldiers, or another assault by Israeli settlers — I’m afraid of losing someone else.

Haj Suleiman’s son, Zayed, opened up to me about the impact his father’s death has had on him: “My friend blames me for not caring; my family complains that I ignore what’s going on at home and that I’m always in my room; and strangers gossip that I don’t answer their messages. But no one understands that I’m lost and indescribably drained. I’m just trying to piece myself together to be an even tougher person. Right now, I’m broken inside.”

Suleiman’s nephew, Tariq, echoed this feeling. “Umm al-Khair was a safe haven, and Haj Suleiman listened to us all. He cared about us so much and was kind and affectionate. Umm al-Khair is an orphan now — we have all lost our parent.”

Umm Salem, a cousin of Haj Suleiman, shared a similar sense of loss: “This disaster is great. Even though women will have more children, none will be like Haj Suleiman. We may get used to his absence, but we will not forget him, we will remember him in all the details of our lives.”

Ihmeed, another cousin, also said that Haj Suleiman was “someone who will never be repeated. He is not like anyone else because he was the best person there was. We have been unable to forget him. We simply lost the light that gave us confidence. We lost our source of inspiration.” 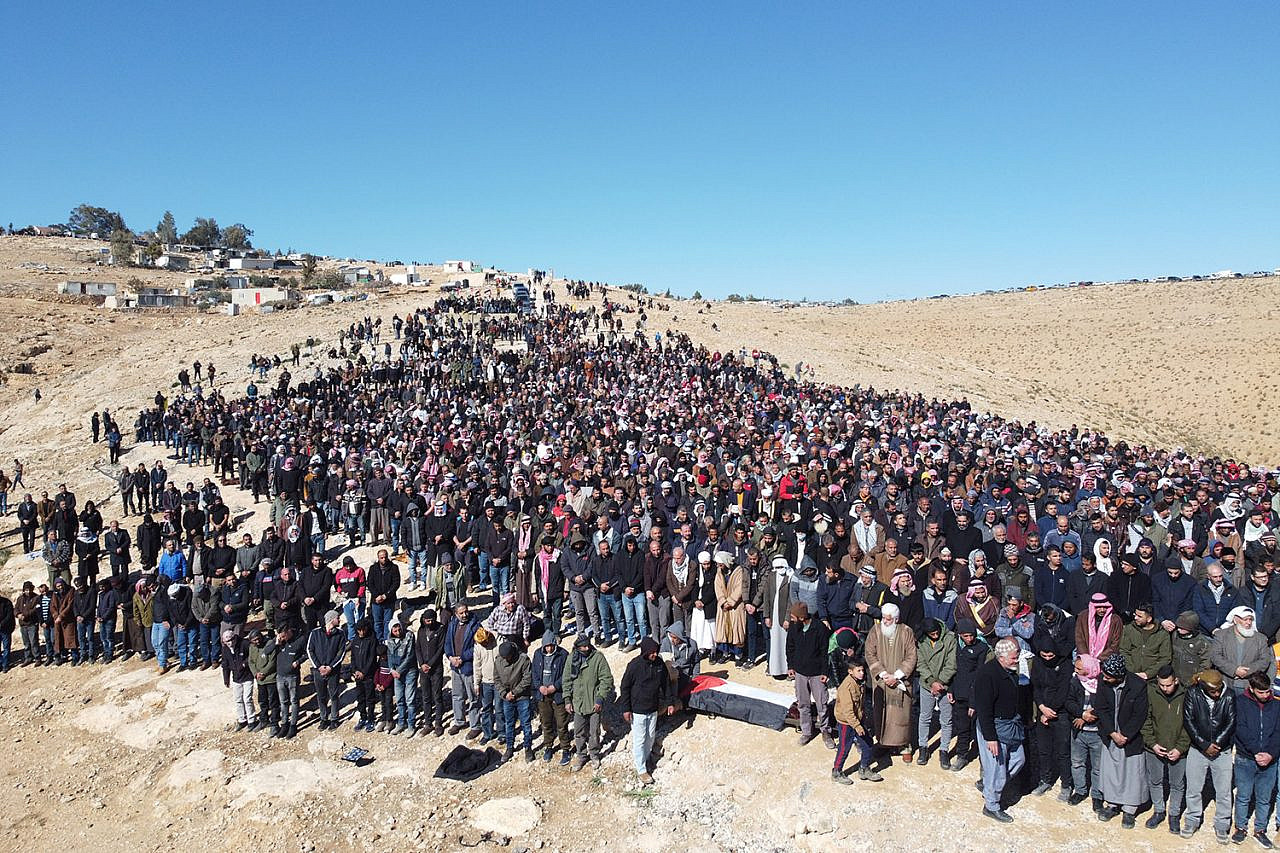 Palestinians gather in Umm al-Khair in the occupied West Bank for the funeral of Haj Suleiman, who was killed by an Israeli police tow truck, January 26, 2022. (Oren Ziv/Activestills.org)

A man of peace

Born in 1952 to a refugee family who had been expelled from their land in Arad during the Nakba four years earlier, Haj Suleiman lived his entire life in Umm al-Khair. He was illiterate and never finished first grade, working instead as a shepherd with his father since childhood. The family relied on grazing sheep for their livelihood, and Haj Suleiman was known as one of the best shepherds around. Along with herding sheep, as a young man he also worked for several years in various kinds of agriculture in order to obtain additional income for himself and his family.

A father to seven sons and daughters, one of whom passed away, Haj Suleiman lived a harsh life full of difficulties. As a teenager, he lived through the Naksa of 1967 — when Israel conquered the West Bank, Gaza, Sinai, and the Golan Heights — and always remembered the suffering that the Palestinians experienced following that war.

Despite leaving school as a young child, Haj Suleiman was always eager to learn. He became fluent in Hebrew, though he liked to pretend in front of the occupation soldiers that he did not understand it in order to eavesdrop on what they were saying. He was familiar with Palestinian history and current events, and loved to listen to the news on the radio every morning.

When he was older, Haj Suleiman became a father, leader, brother, and friend of each of the residents of Umm al-Khair, the person to whom the whole village turned for guidance and direction. He cared about the issues of the Palestinian people as a whole, especially when it came to protecting women and children, and he was particularly loyal to the cause of prisoners. But his mercy extended out to the whole world, and I remember him praying for everyone to overcome the coronavirus.

He dedicated his energy to fighting for the rights of the people in Umm al-Khair and the rest of Masafer Yatta, even succeeding in establishing a village council. He lived an ascetic life, and always remained humble despite the love and respect everyone had for him — which was exemplified by the thousands who came to our village for his funeral from all corners of the West Bank. He was a man of peace and did not believe in violence. He welcomed all who came to our village, and openly recounted to outsiders the suffering he had experienced throughout his years. 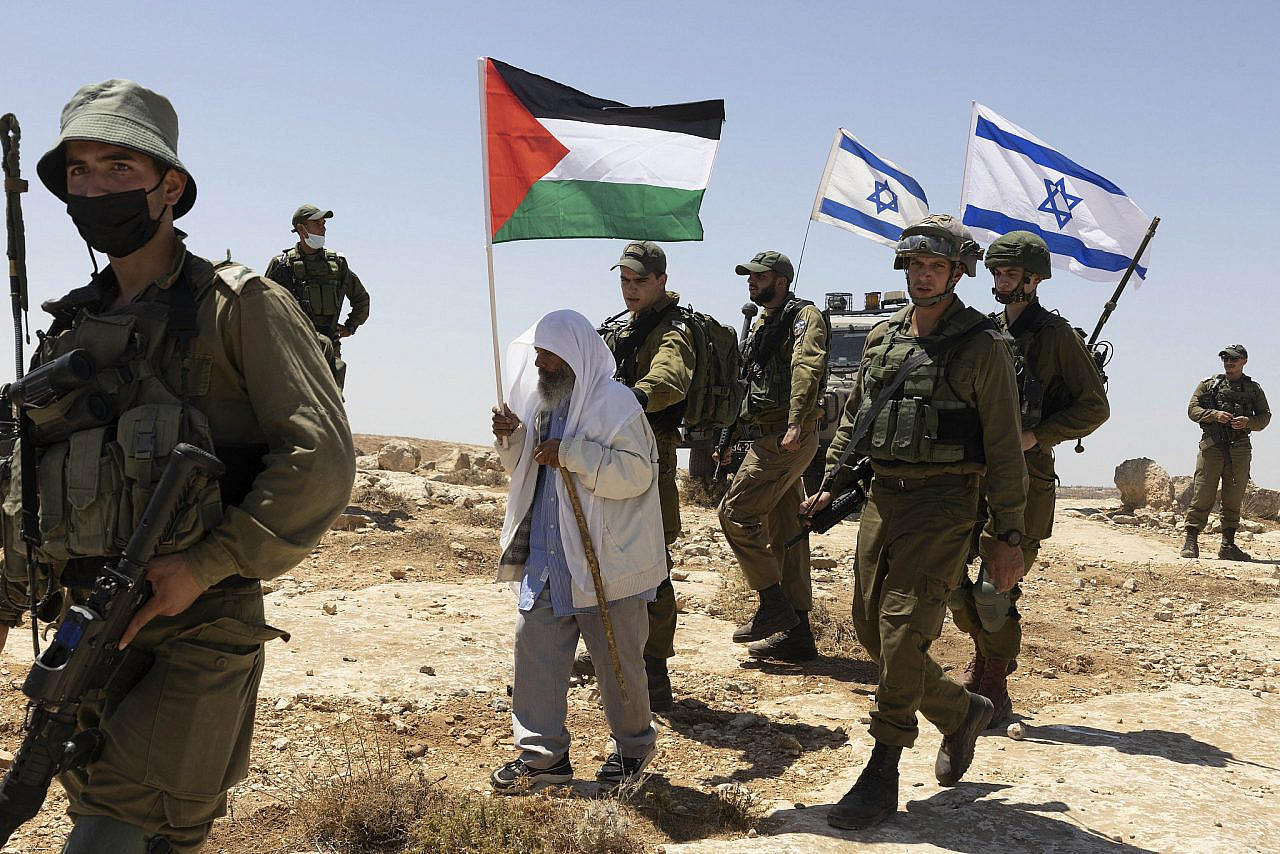 I remember getting up late one Saturday morning a few months ago in our village, eating breakfast and drinking tea next to my mother’s tent, warming myself in the light of the winter sun. I saw Haj Suleiman walking quickly toward his house. I called out to him, inviting him to drink tea with me. “Come here, I want to show you something,” he said. “Look what the occupation soldiers did to me.”

When I approached him, he showed me his wrists: they were red and swollen. Haj Suleiman had been at a demonstration in one of the neighboring villages, when Israeli soldiers grabbed him and detained him inside an army vehicle; they forced him to wear handcuffs for three hours. He was no stranger to such cruel abuses, having been subjected to countless beatings and arrests by Israeli soldiers. But this one would be one of his last.

This memory, among many others, encapsulates my uncle’s powerful character. Despite his old age, Haj Suleiman had a resolute, youthful spirit; there was no event, demonstration, or solidarity march that he did not attend. He was not a head of state, a governor, a mayor, or a minister; he was a simple, illiterate shepherd, but he was appreciated, respected, and famous in his own way and in his own community as a great leader.

Umm al-Khair has lost the man who stood up for everyone, and who solved all of our problems with his great advice. But we will keep Haj Suleiman in our hearts and in our struggle, and we will not forget the sacrifices he made in fighting for our rights — until he sacrificed his very life for us.

We recently painted a mural of him in our village’s community center, expressing the love of the people of the village for our leader. It is the least we can do to honor his memory. We wanted everyone who visits the area to get to know Haj Suleiman, even if only through a painting. We will also carry out several activities bearing Haj Suleiman’s name in the near future, including, most importantly, the cultivation of olive trees in Umm al-Khair. Olives symbolize steadfastness, and, with his memory, we will continue to resist the occupation of our land and continue along the path that Haj Suleiman started.