Israel continued to bombard Gaza overnight, as the Palestinian death toll rose to more than 70 after the collapse of Friday’s UN and U.S.-brokered 72-hour ceasefire that was supposed to lead to negotiations to end the Israel-Hamas war.

Rockets continued to be fired from Gaza into Israel early Saturday morning, with the Iron Dome intercepting some over Tel Aviv and Be’er Sheva.

Hamas’ armed wing stated Saturday that missing soldier Hadar Goldin may have been killed in Israeli air strikes following the incident in which he was captured and two other soldiers killed Friday. The group claims it has lost contact with the cell that carried out the attack on troops in Rafah. U.S. President Barack Obama and UN Secretary-General Ban Ki-moon both condemned the capture and called for the soldier’s immediate release. 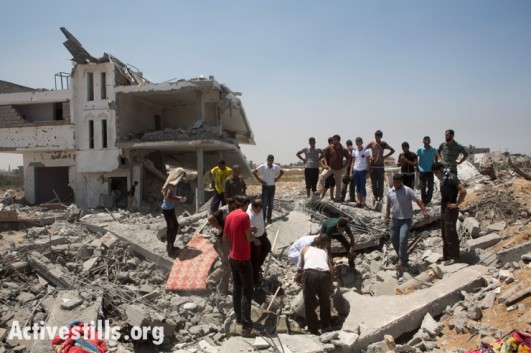 While Hamas  claims the incident occurred at about 7 a.m. Friday morning, Israel asserts that it took place at 9:30 a.m. – nearly two hours into what was supposed to be a 72-hour ceasefire. Goldin’s capture may signal a significant escalation in Israel’s military operation in Gaza, which has entered its 26th day.

Dispatch from Gaza: The bloody devolution of a ‘ceasefire’

Following the capture, the Israeli army carried out heavy shelling and air strikes throughout Gaza, particularly in and around Rafah. Palestinian medical sources say more than 70 people were killed in these attacks. Palestinians told Channel 2 that the army is working to completely isolate Rafah in an attempt to locate Goldin. Roads were reportedly blocked north of Rafah in the direction of Khan Younis, and passage to the Sinai region on the border with Egypt was barred.

Haaretz reported that four tunnels were bombed in Gaza in the past 24 hours and cited a senior Israeli officer who said the military is “very close to completing” the destruction of the tunnels in Gaza. 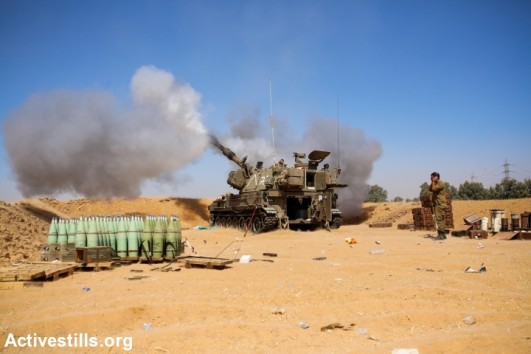 An Israeli artillery fires a shell towards the Gaza Strip from a position near Israel’s border with the Gaza Strip on Augost 1, 2014 after the proposed three-day truce that began at 0500 GMT collapsed amid a deadly new wave of bloodshed and the apparent capture of an Israeli soldier by Hamas (photo: Activestills)

Meanwhile, in the West Bank, more than 90 Palestinians were injured by live fire in clashes with Israeli security forces in Hebron on Friday. According to Ma’an News Agency, organizers said 50,000 people marched in central Hebron in protest of Israel’s ongoing offensive in Gaza. In clashes that broke out in Tul Karm, a 22-year-old Palestinian man was shot dead by Israeli forces, bringing the total number of deaths in West Bank protests over the last three weeks to 13.

Despite the collapse of the temporary ceasefire, chief Palestinian negotiator Saeb Erekat confirmed that a Palestinian delegation would travel to Cairo Saturday evening to continue pushing for a truce.

According to the Palestinian Ministry of Health, the death toll since the start of the Israeli offensive has surpassed 1,650, at least 315 of them children. More than 8,750 Palestinians have been injured, including 2,307 children. A total of 63 Israeli soldiers have been killed in the fighting, while the civilian death toll remains at three – two Israeli citizens and one Thai worker.