A private, low-profile ‘public diplomacy’ outfit is setting out to train ‘Secret Hasbara Agents.’ But don’t worry, it’s not propaganda. 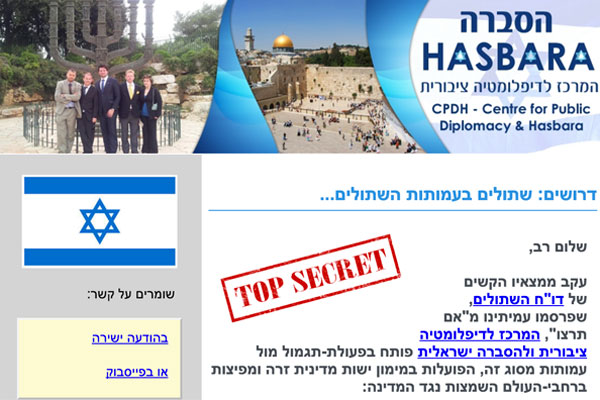 Screenshot of an email from “The Centre for Public Diplomacy”

A private Israeli hasbara – or “public diplomacy” – organization on Wednesday put out one of the weirdest responses yet to the incitement campaign by far-right group Im Tirzu of two weeks ago.

The response ad published on Wednesday called for — presumably right-wing — Israelis to be “planted” inside the “plants,” a reference to the human rights organizations Im Tirzu put in its cross-hairs.

The ad says that following Im Tirzu’s report, the “Centre for Public Diplomacy and Hasbara” is organizing a “reprisal action” against the human rights groups. It wants to encourage people to apply for jobs at the human rights organizations in order to “oppose the dissemination of their lies.”

Cadets in our secret hasbara agent training course will track the wanted ads of these organizations and publish them, with the goal of “planting” employees there who will oppose the dissemination of lies about Israel abroad.

Participants of the course will be sent on “missions abroad.” Moreover, the website promises they will earn a “big reputation as graduates of an elite, prestigious and impressive program from the Centre…”

The “secret agent network” and the ad for the “reprisal operation” marked “top secret” were published on the organization’s web page, as well as its founder’s Facebook and Twitter feeds.

The organization is the brainchild of an attorney named Davidi Hermelin. The “contact us” section of the website lists his mobile phone number. Hermelin has served as chair of the Young Likud committee, he made a run for Knesset, and consults for certain government agencies.

Asked by phone what exactly the concept of “secret agents” means, Hermelin explained to +972 Magazine that his approach is not to engage in hasbara proper or even necessarily Israel-related forums. Instead, the workshops offer participants a range of topics about Israel that they can select for training.

The courses “stress complexity,” he emphasizes. They are not trying to convince participants or their future audiences of any given position. He just wants them to know the facts on any given issue, and have the skills to convey their own ideas.

His example is a lengthy explanation of why Jews in Israel have the exclusive right to settle all the land west of the Jordan river under international law — “by contrast to the other bon ton explanations in the media about international law. They’re just not correct,” he says.

Once participants have completed the course, Hermelin’s organization then actively seeks out any type of forum for the graduates — about 100 since he began in early 2014, he says — to attend abroad. The goal is for them to just interact at these conferences, seminars, or gatherings, to raise conversations spontaneously, prompt questions and then give the answers with the skills and facts they have learned.

Hermelin says that the “plants in the plants” initiative is not meant only for trained members of his workshops, but for anyone: “a broad range of people who don’t want Israel to be presented wrong.”

The ad is currently running links to the employment opportunities page of veteran Israeli NGO “HaMoked – Center for the Defense of the Individual,” which protects Palestinians from occupation-related human rights violations.

The ad also contains the sentence: “Our goal is not to sabotage the activities of the ‘plants’ themselves…but to prevent the false defamation of Israel, to the countries of the world, particularly with foreign government funding.”

The page also reminds “friends” of the organization to avoid breaking Israeli law.

It might tempting to dismiss the organization as an eccentric one-man show, but for some very serious implications.

First, the existence of this “Centre,” however off-grid, is part of a frenzy of private hasbara efforts. It is part of the national obsession with propaganda fostered and funded by the government through numerous bodies, public and private. The Israeli Foreign Ministry itself functions largely as a Ministry of Hasbara these days. As I have argued, this hasbara obsession is damaging to the national psyche, especially when presented as an educational endeavor to shape the thinking of young people.

Second, the idea that impostors might apply for jobs in a human rights organization — not as committed employees but to police their activities — is not impossible at all. And what do they mean by “opposing” the dissemination of lies abroad? Would such “planted” employees covertly record conversations? Testify for Im Tirzu’s next report? Create situations to make the organizations look bad, just as Likud MK Oren Hazan tried to do by giving a made-up testimony to Breaking the Silence? Why does Hermelin need to remind interested people to obey the law?

Third, the mechanism of disguise is like a mental double gag order to suppress what hasbara really is. Hermelin says time and again that left and right wingers alike are welcome, he just wants them to know facts — that is, right-wing facts taught by far-right-wing speakers. The ad itself may just be a gimmick, a distraction turning attention to this wacky initiative while the organization is regularly turning out people who are hasbara-ists, but who pretend they are not.

Finally, the whole thing reminds us how easily other groups are jumping onto Im Tirzu’s mission – a proto-fascist organization whose main activity is inciting and threatening civil society, academia and left-wing causes.

Im Tirzu’s report calls for shutting down those civil society organizations altogether. “If the state of Israel wants to continue to exist as an independent, Jewish and democratic state, it has no choice but to dismantle propaganda organizations that work among us and are funded by foreign money.”

Any new partners to this endeavor, eccentrics or not, strengthen the cause.