A short discussion of the Israeli term used to describe the ongoing, ever-growing, national propaganda effort. 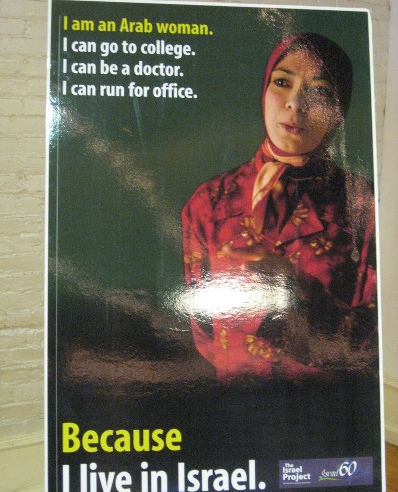 A sign at an event hosted by “The Israel Project” (photo: Noam Shiezaf)

I have used the word “Hasbara” pretty freely recently, and so do more and more people, without stopping to explain what it actually means. The use of this term has been widespread in Israeli Hebrew for many years now, usually with a positive meaning, though not always in a positive context – there is a never-ending debate on “the failure of Hasbara” – yet I often wonder how many people outside Israel actually know it, let alone understand what it stands for. So here are a few words on Hasbara.

Hasbara is a form of propaganda aimed at an international audience, primarily, but not exclusively, in western countries. It is meant to influence the conversation in a way that positively portrays Israeli political moves and policies, including actions undertaken by Israel in the past. Often, Hasbara efforts includes a negative portrayal of the Arabs and especially of Palestinians.

The Hebrew meaning of the word Hasbara (הסברה) is “explanation” (the term “propaganda” has a different word in Hebrew – תעמולה). I believe that the popular use of this term also reflects a widespread public notion that a better effort of explaining Israel’s actions to the world will generate better understandings of Israel’s policies, and more international support. A less common use of the verb “to explain” (להסביר), which has to do with welcoming someone, was used in the past by the Tourism Ministry in campaigns urging Israelis to show a hospitable approach to tourists.

Hasbara represents only one side of propaganda, as it is mostly aimed at foreign audience. The use of the Hebrew term Hasbara in a critical context, rather than “propaganda” or “public diplomacy” (the title of the Wikipedia entry on the issue), is necessary, because Hasbara efforts are wider and their goals much more ambitious than any similar activities taken by all democracies and most non-democracies. Hasbara targets political elites, opinion makers and the public simultaneously; it includes traditional advocacy efforts as well as more general appeals made through mass media, and it is carried out by government agencies, non-governmental organizations, lobbying groups, private citizens, students, journalists and bloggers.

The Israeli government encourages all citizens to actively engage in Hasbara. Recently, it even distributed brochures with talking points to all Israelis traveling abroad (a Hebrew web version of the campaign can be viewed here). Israelis are asked to engage in politically-oriented conversations with their hosts and contacts abroad. Rather than discuss the Palestinian conflict, they are advised to cite Israeli technological achievements, mention environmental policies and take pride in notable cultural works. The West Bank is to be discussed – under its ancient Hebrew name, Judea and Samaria – as a potential tourist marvel.

Until a few years ago, the main government agency carrying out Hasbara work was the Israeli Ministry of Foreign Affairs, through its Media and Hasbara department. Under Ehud Olmert’s government, and more so under Netanyahu’s, there was a considerable increase in Hasbara efforts. Prime Minister Netanyahu has launched for the first time a Hasbara Ministry, headed by a government minister (the current hasbara minister is Yuli Edelstein). The Hasbara Ministry includes a situation room, which operates in five languages; it has a new-media team that can reach, according to the office’s web page, 100,000 volunteers on social media networks, as well as many bloggers.

UPDATE: The Ministry of Hasbara is hiring! “Advantage to minorities and representatives of the gay community.” More details here.

On top of the Hasbara Ministry, there is a Hasbara branch in the Prime Minister’s Office (in charge of both local and international PR). The IDF Spokesperson has an international arm with a new media branch, which makes Hasbara efforts and does not limit itself to providing information on army activities. Other government agencies, such as the Ministry of Tourism or the Ministry of Culture, also take part in ad-hoc Hasbara activities. There are other agencies that have gradually moved into greater involvement in Hasbara – perhaps the most notable is The Jewish Agency, which used to serve as a liaison to Jewish communities abroad, and now trains its envoys to American campuses to engage in propaganda.

Under Foreign Minister Avigdor Lieberman, the Foreign Ministry was instructed to take a bigger role in the Hasbara effort (a popular rant against the foreign ministry for many years was that it deals with peacemaking instead of advocacy, and Lieberman has promised to solve that). I was contacted awhile ago by a private agency that won a contract with the foreign ministry; they were looking for professionals to play hostile journalists in simulations with Israeli diplomats.

Much of the Hasbara work carried out outside official channels – but with heavy official influence – is carried out through non-governmental organizations such as Stand With Us, The Israel Project and more. These organizations produce resources – booklets, slideshows, flyers, maps, polls and more – and spin news events in ways which are favorable to the Israeli government. A lot of thought is put into influencing opinion-makers: journalists and bloggers are flown on a regular basis to tours in Israel, accompanied by government officials, while Israeli representatives – former diplomats, journalists, soldiers and officers – are brought to give lectures at campuses, think-tanks, conferences and other public events around the world. Organizations also try to influence the grassroots level by granting Hasbara fellowships to international students in Israel.

There is an interesting tension in Israel between the tremendous efforts put into Hasbara – Israeli advocacy is probably the most widespread and ambitious state-run propaganda effort in the world today – and a sense of “Hasbara failure” in the Israeli public. Rants about the fact that Israel is misunderstood and complaints about the incompetence of those dealing with Hasbara are often heard in the popular media. In my opinion, “the failure of Hasbara” is actually a failure of policy – especially, but not limited to, that relating to the occupation and the control over the Palestinians.

Understanding this point could shed light on a self-defeating element in the Hasbara battle: as Israel loses interest in finding a solution to the Palestinian question that would meet the minimal moral standards of the Western World – either “one man one vote” or complete Palestinian sovereignty over a contiguous territorial unit – Hasbara efforts are just likely to draw more attention to the ongoing Israeli failure to live up to the promise of its talking points, and will shed more light on the ever-growing gap between the model, picture-perfect democracy reflected in brochures and the grim reality on the ground.