Unlike last summer, the “Occupy Israel” social protest Saturday night included explicit anti-government messages and universal human rights language. Could this be the start of a civil rebellion?

Anger, energy, rhythm and momentum flowed from the crowd of perhaps 5,000 people who packed into Rabin Square Saturday evening, as the kick-off for the next round of social protests. There was an unruly, cacophonous spirit – the stage was moved from its traditional, stately position in front of the municipality to an offbeat corner of the open square, putting the demo on a sort of rakish angle. Several people were beating drums, chanters had to be silenced to hear the speakers, speakers shouted unpolished texts into the low-quality sound system. It looked like the rough-edged poor cousins of the huge and heavy summer protests, with their singular chant “the people demand social justice.” 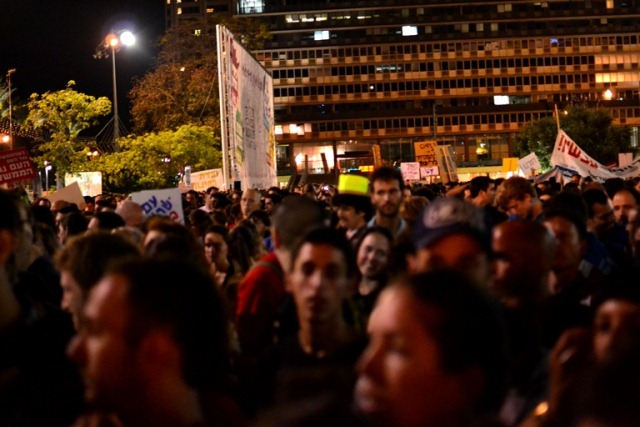 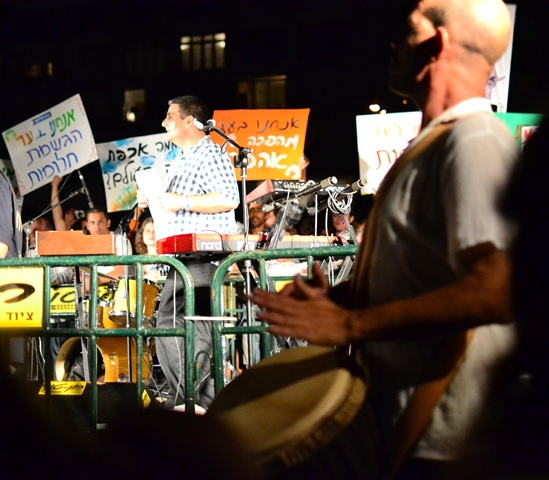 As a result, it felt a lot more genuine.

Although summer, the unofficial protest season, hasn’t quite begun, and the reason for the protest was the international occupy day rather than any fresh public injury – still people turned out in far greater numbers than they had for any other recent protests. Last week’s demonstration against the new coalition deal, the one a few weeks earlier (a sort of message-free general protest march) and the demo against an attack on Iran before that – all seemed to draw more cops and bloggers than demonstrators, who numbered barely a few hundred each. Last night it felt like a storm cloud had exploded without waiting for the thunderbolt at the starting line.

Over last summer, I wrote of my frustration with what I observed to be a shallow, catch-all message – “social justice,” which meant something different to everyone and was too easily diluted. The maddening insistence on being non-political felt absurd, and the refusal to address the connection of social issues with the Israeli-Palestinian conflict was deeply alienating to me personally.

Mostly, I was annoyed by the public tone of begging the government in a sort of self-infantilizing cry for help, rather than demanding its head.

Last night, for the first time, many people replaced “the people demand social justice,” with “the people demand a civil rebellion!”  Just as I entered the throng, a wave of “Bibi go home!” was rippling through the square. Signs taunted the leaders. 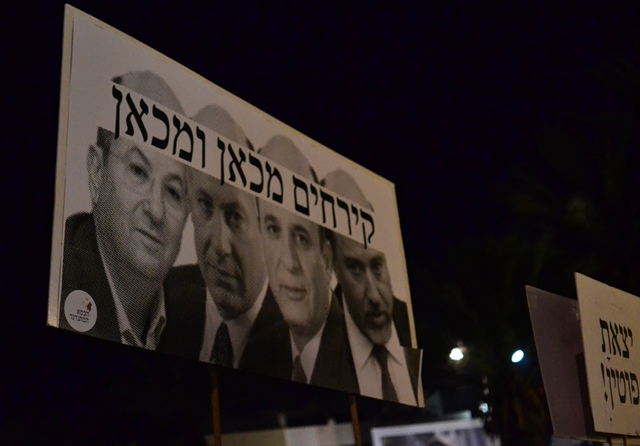 To be sure, there were no sudden calls for an end to the occupation. But the fact that signs talked of human rights and diversity is something I do not recall from the first wave of demonstrations. The very term “human rights” in this country has been so tainted as a left-wing conspiracy that this is the first indication of a shifting role for the concept – which could ultimately be understood for its universal meaning. 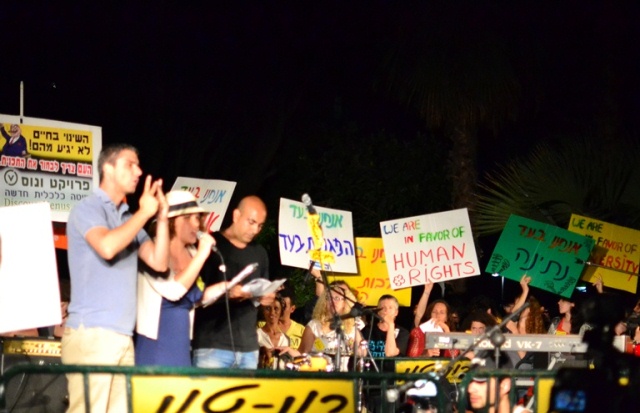 The fact that the speakers were unknown, and looked nothing like the slick Tel Aviv hipsters of last summer, was moving – I find Gideon Levy’s critique of this to be, frankly, elitist. I too saw Daphni Leef milling around in the crowd, while a different crop of citizens beamed at the audience and told their stories. I took that as a good sign. 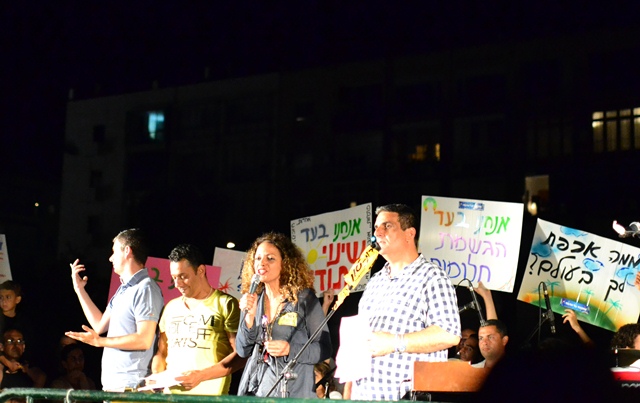 These folks got great audience support when they boasted of having no party backing or affiliation, and no financial support from anyone. They asked for contributions in bottles being passed around, to cover the evening’s costs. That’s a reminder that beyond all the righteous commentary about the masterful-or-machiavellian coalition deal, the public mainly feels left out. Only now instead of begging for attention, the citizens are just leaving the politicians behind. Again, this is a good thing: I’m waiting to see the politicians fall over each other trying to catch up, instead of dreaming up ways to shut them up.

One party did make its presence known: Meretz, the party that might actually be the source of true opposition to the new government. It’s hard to trust Labor, given the stated willingness of its leader to play along with Netanyahu, before she was cut out of the coalition deal. An excellent (curiously not yet translated) interview with under-appreciated Meretz leader Zehava Gal-On in Haaretz this weekend shows some courageous thinking on current issues, such as the Tal Law. With no coalition pressures and little to lose, Meretz could be the party that sets the bar – or pushes the boundaries – for the opposition discourse. 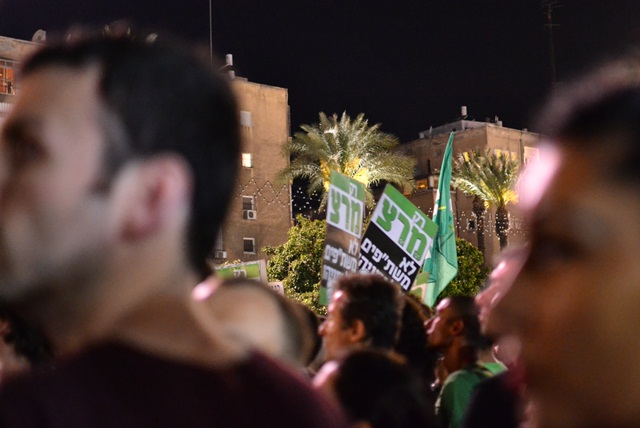 In sum, whether it was due to the raw feeling among a diverse crowd of protesters, more explicit anti-government messages that were hard to contain, the incipient presence of a universal human rights language or just the numbers themselves – the protest last night felt different. The giddy bubble of last summer seems to be giving way to something tougher, less controlled and less forgiving. 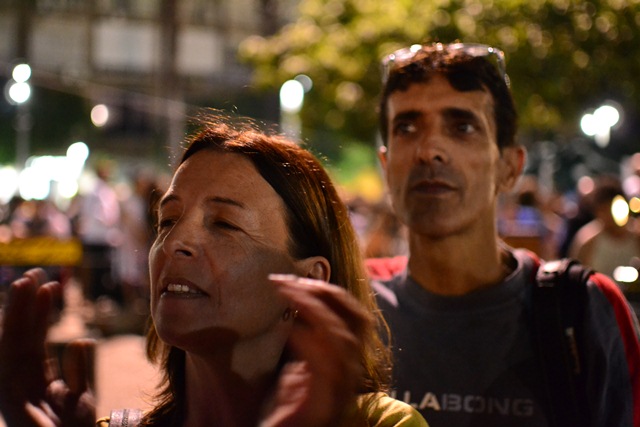 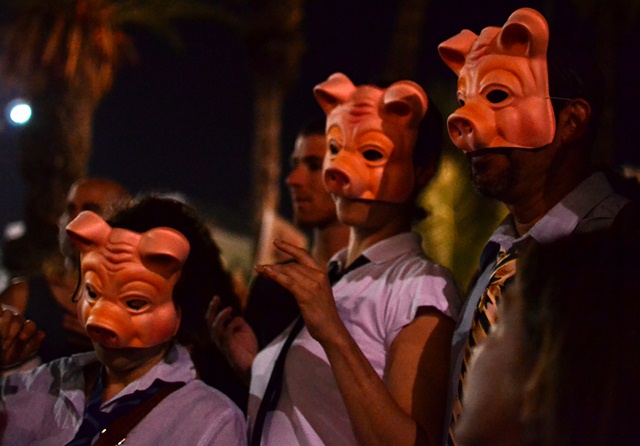 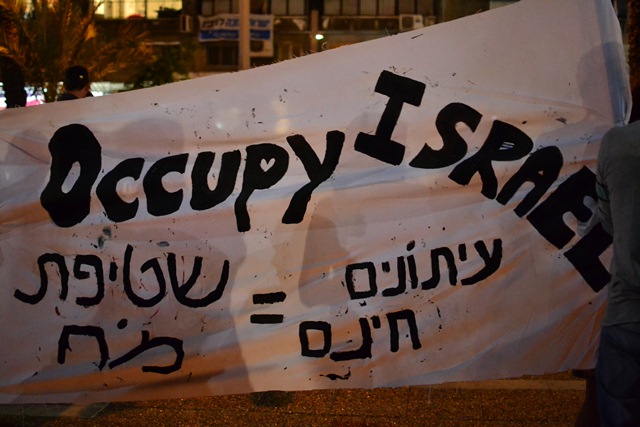