By Avraham H. Muthada (Translated from Hebrew By Iris Barner)

Ruth Caldreron’s maiden speech in the Knesset (Hebrew) left a mark in our memories and amazed the Israeli public. Ever since, the secular Midrashas (seminaries for women) she represents are sprouting up everywhere and are presenting a refreshing, new Jewish discourse. We have before us a modern and progressive Judaism that forms a bridge between past and present, between Zionism and moderate Judaism that links us back to our roots. But I wonder, did my tradition-keeping ancestors not bring with them the moderate God from abroad? Wasn’t it Calederon’s ancestors who dismissed my ancestors with one fell swoop and uprooted God from their hearts? It seems that the West is once again shown as a conqueror and destroyer, and then it picks up the pieces and rearranges them back into a mosaic that represents its views. 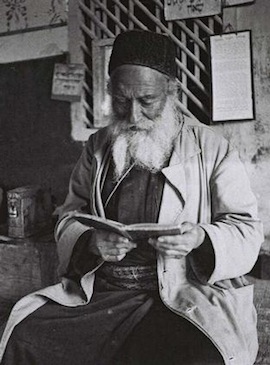 Every Saturday I hurry to the Iranian immigrants’ synagogue, and my heart sinks. I see a place of public worship, like the ones right next to it, where the number of worshipers is decreasing, standing on the brink. The aging generation around me finds it hard to understand how in the Holy Land of all places, the chain of tradition that survived exile has been broken.

The patterns of secularization and modernization that began in Europe in the 18th Century, as well as internal Jewish processes like emancipation and nationalism (particularly Zionism), shook the communal-religious structure; European Jewry was divide between complete secularity on the one hand and a deepening orthodoxy that proclaimed “renewal is prohibited by the Torah,” on the other. Moreover, at the center of European Jewry’s collective memory are the events of the Holocaust, a turning point wherein many lost their God somewhere in Auschwitz. Zionism, which reinvented “the new Jew,” rejected the Diaspora, shed religion’s values and emptied from it the notion of God. The Book of Books was replaced by the hammer and sickle, Shmira (guards), labor and Hebrew education. Ben-Gurion professed that, “in 30 years Orthodox Jews will exist only in Museums.”

My ancestors, in comparison, Jews from Muslim countries, also went through processes of modernization in the European empires’ various colonies. But unlike their European brethren, they did not desert religion or surrounded themselves with walls. The family structure and traditional values remained important to them despite changes that took place in their lifestyle and to the centrality of religion among Jews. Mizrahi Jewry knew how to bring God with it toward modernity, with a clear intention of preserving its traditions.

As part of encouraging the many waves of immigration to Israel, the Jewish Agency came to Jews of the Muslim countries and argued that, “the time of salvation is upon us.” They took advantage of their longing for Zion, explained that Herzl and Ben-Gurion were the successors of Moses and Aaron, and therefore, Golda is the prophetess Miriam. Our naive grandmothers and grandfathers believed them and immigrated to Israel; they longed for Jerusalem and the holy land so much that they even named their children after the new prophets. After the Jewish Agency used God’s name in vein in order to get them to immigrate, they whispered in their ears that God is no longer relevant here and that those who believed in him are primitive. ‘Modernization’ is what they called the steamroller of secularization they bulldozed over the new immigrants. With their own hands they cut our forelocks, severed our forefathers heritage and eradicated every trace of God. Parties like Tami (The Movement for the Heritage of Israel), which tried to rebel and promote traditional communities, quickly faded away. The fracture Zionism brought about in Mizrahi Jewry was so profound that erected in front of it two barricades: secularization or orthodoxy, resembling European Judaism. This is how religious Mizrahim found themselves in Lithuanian clothing, studying in Ashkenazi institutions. It is not for nothing that Shas calls itself Sepharadi and not Mizrahi (Sepharadi is a more highly regarded adjective in the Israeli perception), and defines its religion as orthodox and not traditional Judaism.

As a matter of fact, Tami’s failure as a movement that appealed to the basic components of the traditional Mizrahi public, and not the Sepharadi-Orthodox, proves the triumph of the melting pot policy, and the shedding of culture and authentic tradition by Jews from Muslim countries.

This is how a whole generation that underwent enforced secularization grew up, which led some of it to radical orthodoxy. The same ember that kept the fire of tradition burning was forced to assimilate between black and knitted kippot – because our clear kippot are unseen. Mizrahi traditionalists are perceived in Israeli society as Mezuzah kissers and foolish believers of amulets.

No one stopped to ask how it came to pass that the grandsons of wise and knowledgeable rabbis did not follow in their footsteps and shunned all elements of their heritage?

And what was the reason for uprooting tradition from these Jews?

The simple fact: traditionalist Jews pose a threat to the secularity of the state. The wondrous and relaxed moderation that knows how to weave together the Jewish mosaic to the Israeli of today, causes sleepless nights for the secular-Ashkenazi hegemony. Orthodoxy, on the other hand, fits into the polarization between secular and orthodox, modern and Diaspora-natured, normal and extreme. The “dressed-up” traditionalism that Israel adopted in recent years just for show, and it still uproots the values and a profound understanding of the Israeli holidays. Like Zionism, Israeliness, emptied the Jewish holidays of content and turned them into feasts of shopping and eating, which exploit the family motif imprinted in traditional Jewish memory.

The wagon is indeed empty

Now, following the collapse of the Ashkenzi-Zionist system into the abyss, it reinvents God. Ruth Calderon and her secular Midrashas, the same people who uprooted Godliness from the hearts of the Mizrahi Jews, who claimed that Sepharadi moderation has no place in Israel, are demanding the right to God and his teachings. ‘Progressive Judaism,’ they call their Judaism, and we remain invisible?

And I wonder and cry out, wasn’t it you who asked for the Torah of Herzl and the doctrines of Ben-Gurion, and therefore you should stick with it. And at last you should understand that the Jewish-Hebrew story, is Middle Eastern and not European. The origin of our forefathers and mothers is here in the Eastern realm. Truly Mizrahi!

I will not stand aside and watch how you speak in the name of my God after you have dispossessed the memory of my forefathers from their culture, and now you seek to inherit their way and their land. This is what the profit Eliyahu accused King Ahab of in the story of the dispossession of Navot’s vineyard: “Have you murdered and also come to take possession?”

Avraham H. Muthada is a writer and teacher of communications and journalism. This post originally appeared in Hebrew on Haokets.