Mr. Adelson, a friend and supporter of Prime Minister Netanyahu, poured almost 100 million dollars into six Republican campaigns, but saw only one of his candidates win. 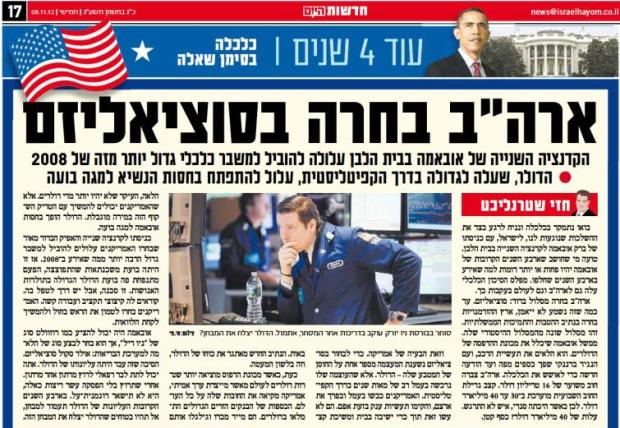 Sore losers: Israel Hayom, the free daily paper owned and published by American gambling billionaire Sheldon Adelson, didn’t try to hide its disappointment over the results of the U.S. elections.

This morning, a large headline in the news section declared that “America chose socialism.” The sub-headline reads: “Obama’s second term in the White House could lead to a greater economic crisis than that of 2008.”

Early this week, articles in Israel Hayom were still reporting on optimism from within the Romney camp. On Tuesday, an article in the news section quoted Mr. and Mrs. Adelson’s op-eds, which urged voters to support the GOP ticket.

A couple of weeks ago, Israel Hayom ran a chapter from Dinesh D’Souza’s “The Roots of Obama’s Rage”; the lede to the story declared that Obama’s “spiritual fathers” are an anti-Israeli and a terrorist. The book was also mentioned in the profile of Obama the paper ran on elections day, while the profile of Mitt Romney was entirely positive.

Sheldon Adelson was one of the largest contributors to Romney’s campaign, as well as to five other Rebublican candidates. Among them was Florida Rep. Allen West, whose Super PAC got $1.5 million from the gambling billionaire. All of Mr. Adelson’s candidates except for incumbent Senator Dean Heller (NV) lost (West is probably heading to a re-count). Altogether, Adelson spent $100 million on the 2012 elections.

Israel Hayom was launched by Sheldon Adelson in 2007. The paper is distributed for free, at considerable loss. In the last couple of years, it has become the most widely read paper in Israel. Israel Hayom takes an active pro-Netanayhu line. Last year, it was revealed that a senior political pundit for the paper, Dror Eydar, is on the Prime Minister’s Office payroll.