Rome, Italy — Leaders from Germany, France, Spain and Italy meet in rare 4-way meeting to try to reach consensus on Euro crisis plan ahead of critical summit in Brussels.

German Chancellor Angela Merkel, easily the biggest fan of the Euro currency among those who attended the so-called “Mini-EU Summit” alongside her on Friday – the heads of government from France, Spain and Italy – arrived at Rome’s Villa Madama Palace a little more reassured than she could have expected just one week ago. In recent days, voters in economically-troubled Greece chose a centrist, pro-bailout government just one month after electing extremist parties on the political left and right (who were unable to form a government).

And Spain just days ago asked Europe to borrow up to 125 billion dollars to recapitalize its struggling banks, a sign that it recognizes Brusselle’s ability to help. Merkel insists the loans will come with some conditions, though it is not technically an austerity plan per se. Spanish Prime Minister Mariano Rajoy used every word, term and phrase to describe the move, short of calling it a bailout. But still, the fact that Madrid is knocking on Europe’s door and willing to take some advice on fiscal responsibility is again good news for Merkel.

Arguably, the somewhat reserved German leader was already feeling good about herself after making a strong showing in Mexico last week, making a strong push for her version of a European fiscal union at the G20 Summit in Los Cabos. Even American President Barack Obama signaled slight supportive for the initiative, for which he had previous reservations. 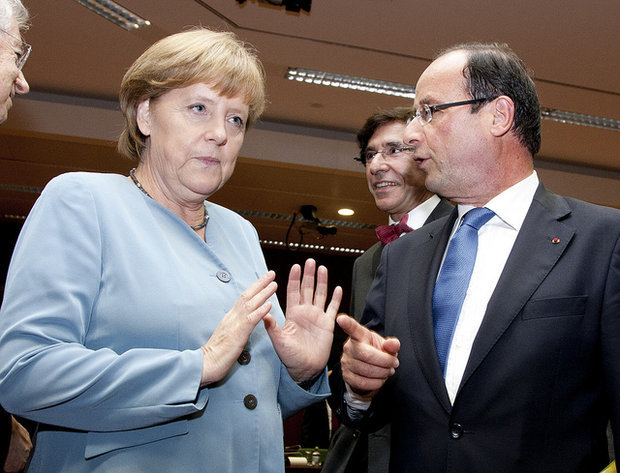 Indeed, things seemed to be going Chancellor Merkel’s way as she arrived for the quadrilateral meeting, and even she for once appeared peppy. But Merkel is a big advocate of what she calls “responsible fiscal policy.” And before she hands over Germany’s credit to any of its neighbors, she insists on making sure strict fiscal rules of governance are in place. Effectively, that means less power in Europe’s capitals (plural) and more power in Europe’s capital (singular).  Speaking to the media after the meeting, Merkel vowed to strengthen not only Europe’s fiscal belt.

[I]n order to be more united, it means control and responsibility go hand in hand…. We will all work for this goal [of a stronger political Union] and we’ll discuss it in our countries. The crisis of the euro means more Europe, not less Europe.

“More Europe” is slowly becoming a catchphrase associated with Merkel, whose Federal-system allows her to more easily transfer some sovereignty to Brussels. France’s recently-elected President Francois Hollande presides over the Fifth Republic, ties his hands slightly more. Which is why Merkel continues to face some push-back from the French leader. And now, a strong win – the majority of seats in the Parliament – for Hollande’s Socialist Party has given him – and them – a mandate with an unprecedented amount of power

Hollande is digging in his heels, pushing his version of shared European debt responsibility without any relinquishment of sovereignty to Brussels:

I am against austerity. And at the same time, we realize that we must send a message of coherence and stability, therefore of confidence. That is what we are doing today and that is what the European Council must measure. Its role, and we want to send this message, is very concrete, to support growth … using to the full capacity the mechanisms of stability, and in the end defining for the medium term a vision of Europe, allowing for solidarity, and using the Eurobonds as an illustration of that solidarity.

If “bailout” is Rajoy’s no-no word, and “austerity” is Hollande’s, then “Eurobonds” is definitely Merkel’s “nicht-nicht” word. She knows that back home, Germans and indeed her own coalition partners, appear to be growing weary of – as they see it – picking up the tab for the rest of Europe. Issuing European bonds, they feel, would tie them into the sovereign debts of neighboring countries without any oversight of their financial institutions.

Instead the new term that everyone seems to agree upon is “growth pact,” thrown around a few times in the lead up to the “Mini-EU Summit.” The leaders of the four biggest economies in Europe are pledging to get the continent’s economies back on track through cross-border investments in the private sector. They see that as the best solution for stabilizing Europe in the short-term and solving the crisis in the long-term. But the German Chancellor – who is stacking all her chips on the Euro – will have to make that push to the rest of Europe’s leaders next week when they gather in Brussels for the “Big” EU Summit. And whether her pledge of “more Europe” and effectively “more Euro” remains unshakable may determine if others are willing to follow her bet.