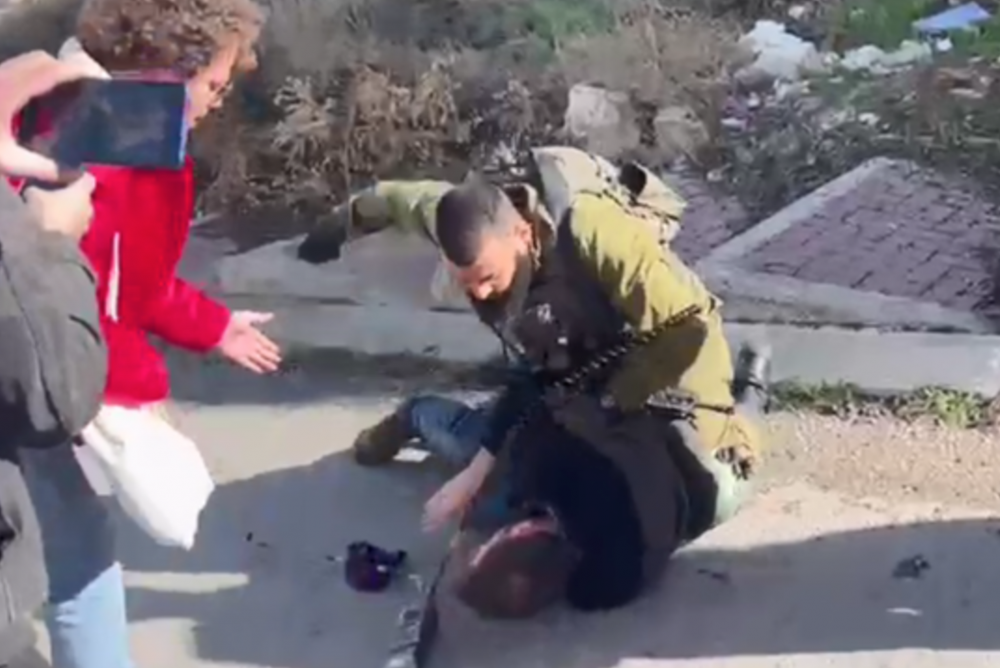 Last Friday, an Israeli soldier from the army’s Givati Brigade was filmed beating a left-wing Israeli activist in Hebron, in the occupied West Bank. The activist was part of a delegation of 15 religious left-wing Jews from the group Bnei Avraham, which came to Hebron for a tour and to meet with Palestinian residents of the city who were attacked the previous weekend by masses of Israeli settlers. Another soldier at the scene was filmed telling the activists that “Ben Gvir is going to bring order to this place,” and “I don’t like leftists, I will fuck you up.”

In the aftermath of the incident on Friday, right-wing politicians and members of the media have embarked on a well-known campaign of “What Happened Before?” claiming the event was only partially documented and that the soldiers must have been responding to provocations by the activists. This is despite the fact that even the Israeli army spokesperson, who almost always comes to the defense of soldiers’ actions in incidents like this, did not claim that there had been any violence from the activists, and despite the letter published by the chief of staff which denounced the soldiers’ behavior. Testimonies from the activists who were present at the time of the incident also contradict these claims.

Moreover, the neighborhood of Tel Rumeida, where the incident took place, is full of security cameras belonging to the Israeli army and settlers. Settlers and soldiers who witnessed the assault could also easily have documented the “provocations” that supposedly occurred, yet no such footage has emerged.

The army is investigating the soldier who assaulted the activist, while the soldier who threatened to attack other activists was sentenced to 10 days in military prison. Meanwhile, the activist who was assaulted has himself been placed under house arrest for five days and barred from returning to Hebron for two weeks, along with two other activists who were present. The three activists were twice brought in for interrogation on suspicion of attacking a public servant and disturbing the peace.

Bnei Avraham is one of the oldest left-wing groups active in Hebron, and has resumed operating in its current incarnation in recent months. Ahead of Shabbat Chayei Sarah — the annual settler parade through the Old City, which accompanies the Torah reading from the Book of Genesis in which Abraham purchases a plot of land in Hebron in which to bury his wife, Sarah — the group’s activists distributed pashkevil posters (a common way in which information is transmitted in ultra-Orthodox areas where people don’t use the internet) titled, “Declaration of opinion and protest against the blasphemous actions of our brothers in the city of our forefathers.” 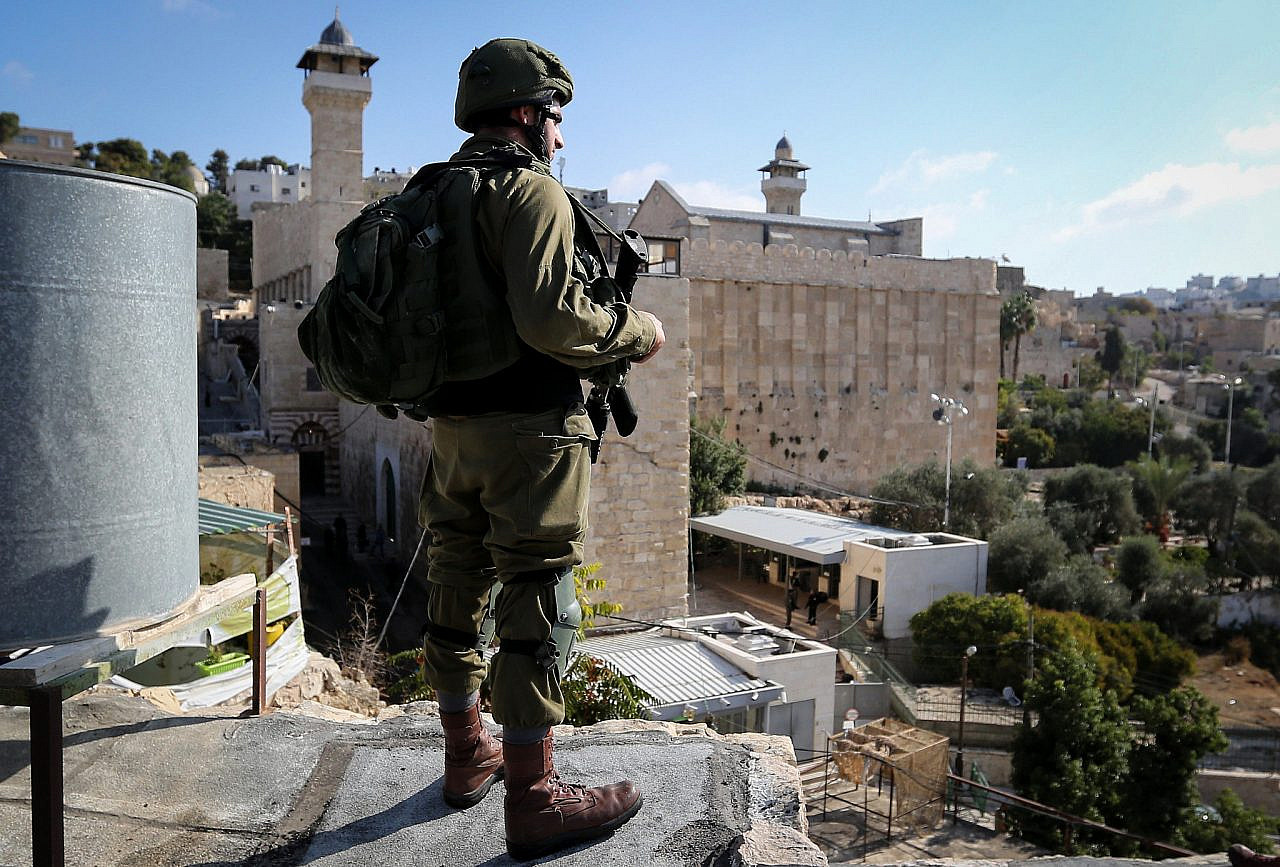 Israeli troops take position around the Cave of the Patriarchs, also known as the Ibrahimi Mosque, in the old city of Hebron, occupied West Bank, October 30, 2019. (Wisam Hashlamoun/Flash90)

Many of the Bnei Avraham activists were afraid to be interviewed for this article. “In the current atmosphere, everyone who raises their head faces a personal campaign that is likely to harm them,” said Mikhael Manekin, a longtime political activist and a member of the group who was present on Friday. “As religious parents of schoolchildren, it’s not like people are somehow going back to a sympathetic environment.”

Jumped on by soldiers

Manekin, a 43-year-old from Jerusalem, has been to Hebron many times. The tour on Friday, he explained, had two goals: “First, to bring people to Hebron who had never been and wanted to see the city, and second, after the pogrom during Shabbat Chayei Sarah, people wanted to express solidarity with the families that had been attacked. We have friends in Tel Rumeida [a Palestinian neighborhood subject to settler takeover attempts], and we wanted to see how they were doing,” he said.

“We arrived from Kiryat Arba, we walked around the areas where it is possible to walk, and, like every tour, we went to the Cave of the Patriarchs [the Ibrahimi Mosque] and to Shuhada Street. The participants are people who look religious, so we didn’t attract any special attention, everything was normal. There was no ‘demonstration,’ and since it was Friday, there was pressure from the group to get home in time for Shabbat.”

Manekin remarked that during their walk down Shuhada Street, where Palestinian access is almost entirely prohibited, a soldier at one of the checkpoints asked if they were “internationals.” After answering in the negative, he allowed them to continue without any disturbance in the direction of Tel Rumeida. The group, Manekin noted, initially passed through the intersection where the attack eventually took place without any interference from the soldiers.

“We passed through there twice, and when they didn’t know we were leftists, they didn’t care. We went to the home of Issa [Amro, who runs the activist group Youth Against Settlements from his home and is a frequent target for harassment by the army and settlers], and he explained to us what happened on Shabbat Chayei Sarah. From there, we continued to the house of the Al-Azza family, which had been attacked, and from there we went by foot to Gilbert Junction around noon, in order to go back to the bus and return home.”

When the activists made their way down the road, Manekin explained, there was a group of American tourists dancing in a circle with the soldiers. “The Palestinians [in the area] anxiously stood further back, and two or three participants from the group said to [the Americans], ‘What’s happening in Hebron is blasphemy.’ This was the only ‘provocation’ that I can think of. The second it happened, the soldiers, who realized we were leftists, started to yell at us and told us to stand behind some imaginary line that we couldn’t cross, pushed us to the side, and told us not to move. 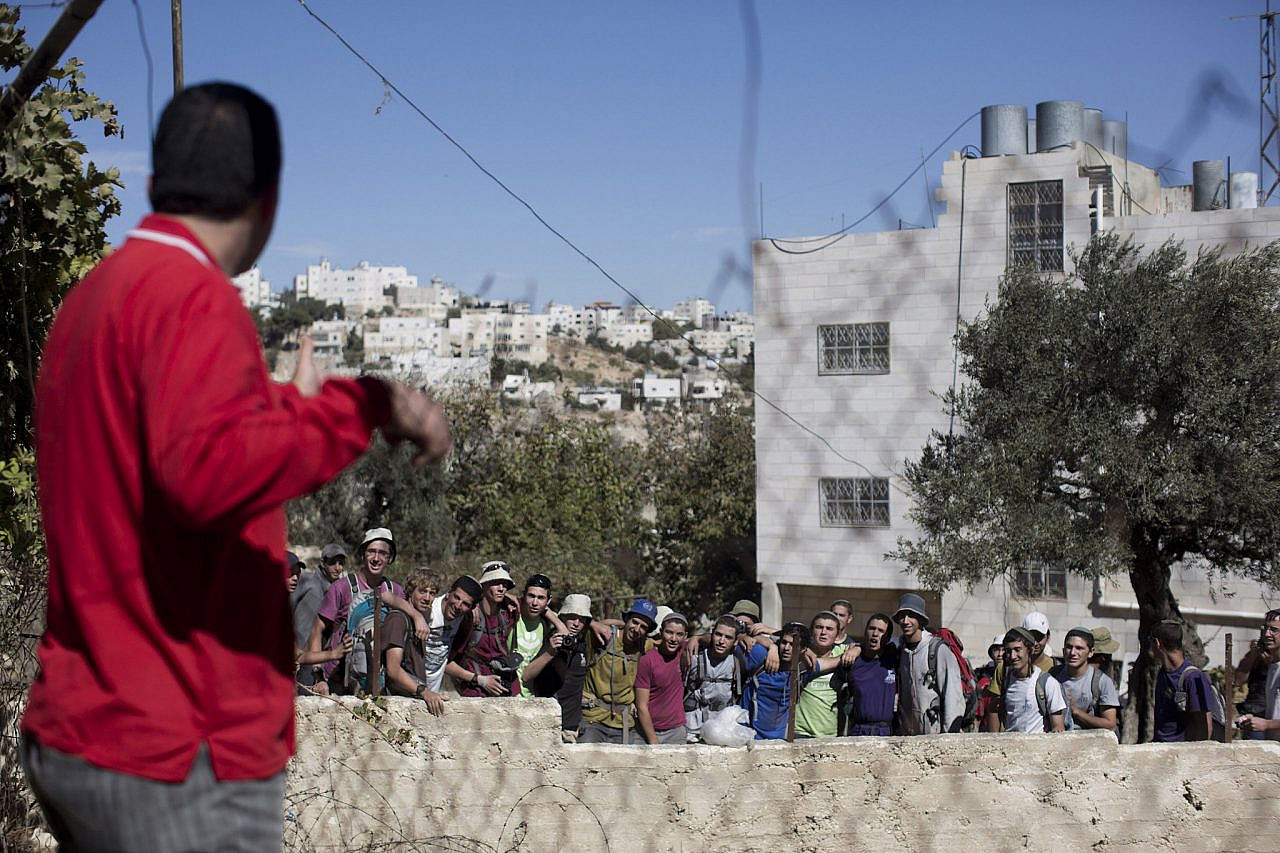 Issa Amro, a coordinator of the group “Youth Against Settlements,” looks at Israeli settlers during a tour in the Tel Rumeida neighborhood in the West Bank city of Hebron, October 25, 2013. (Activestills)

“Then, at some point, their pushing increased and they attacked the guy, eventually injuring him,” Manekin continued. “They threw him into the bus shelter. While they were pushing, the women [whose religious customs forbid them from touching men who are not close relatives] shouted not to push them, but they continued to push, and the head covering of one of the women fell off. The guy wanted to leave the bus station and get out of there, and then one of the soldiers jumped on him from behind, knocked him to the ground, punched him, and pushed his gun up against the guy’s back for a good few seconds. They also pointed their weapons at us, loaded and ready to fire.”

Throughout the incident, Manekin recalled, he reiterated to the soldiers that they just wanted to leave so they could get home before Shabbat. “Even when they threw the guy on the ground and arrested him, we told them: ‘Let him go and we’ll all leave.’” After that, the activists waited for around half an hour until more forces, including police and army officers, arrived and decided to detain two activists in addition to the man who was attacked. “We could have left already, [but] as soon as the police arrived and a soldier spoke to them, they informed the two ultra-Orthodox women that they were also under arrest.”

By the time Shabbat came in, the videos had already gone viral on social media, but it was when the army’s chief of staff responded that Manekin realized it had become a big story. “I began to worry because I understood that the right will have to respond to the chief of staff’s letter, and that it will do so by blaming the activists. The army published the letter, it won’t really do anything else — that’s already a lot from their perspective.”

Manekin is saddened by the accusations that the activists provoked the soldiers by cursing or spitting at them, as some on the right have claimed. “That’s not how we talk. The whole goal of the group is to be more gentle,” he said. On the other hand, he said that he has “never encountered such behavior from soldiers,” who were “super violent and aggressive.” The soldiers “straight up talked politics and stuck a live weapon in the guy’s back. They were like thugs with guns.”

After a long period away from Hebron, Manekin feels that the army’s conduct toward left-wing activists in the city has deteriorated to a new low. “It’s not that there was a love of leftists before, but there are similar characteristics between what happened to us and the incident with Elor Azaria [an Israeli soldier who was filmed shooting dead an already incapacitated Palestinian militant, and then became a hero among the political right and received only minor rebuke from the army]. It happened in the same place, with soldiers who are clearly acting against the laws and norms — regardless of what I think of those norms. And it has received significant backing from the political establishment,” he added.

The activists, he said, are minor players. “The real story is the connection between what is happening in the army and what is happening on the Ben-Gvirist right — it is as if the deep right is taking over the army. As someone who knows Hebron, I know that the claim that Ben Gvir supports the soldiers is delusional on so many levels. This is not a man who sees the army as something untouchable. Only [recently] on Shabbat Chayei Sarah, settlers attacked soldiers, and it didn’t create anything like the dynamics we’ve seen in recent days. It seems that the army is scared of these guys.”