Riding the wave of unrest in the Arab world, the PA called for a carefully controlled ‘day of rage’ throughout the West Bank against the United States for their recent veto of an internationally accepted resolution declaring (once again) that Israeli settlement activity is illegal. While in Ramallah the PA sponsored demonstration was weak with almost no one showing up, in Hebron one thousand people, including Israeli peace activists, took to the streets. Feburary 25th also happened to be the Open Shuhada Street Global Day of Action. Organized by the Palestinian NGO, Youth Against Settlements, protests were held in more than thirteen cities including New York, Cape Town, London and Rome. The demonstration was called for 25th February because it marks the anniversary of the Baruch Goldstein massacre and subsequent closing of Shuhada street to Palestinians. The Global Day of Action demands for the re-opening of Shuhada Street to Palestinians and an end to the Occupation. All of the factors for present for a peaceful demonstration to get out of hand. With the first salvo of tear gas, the demonstration quickly turned into a riot.﻿ 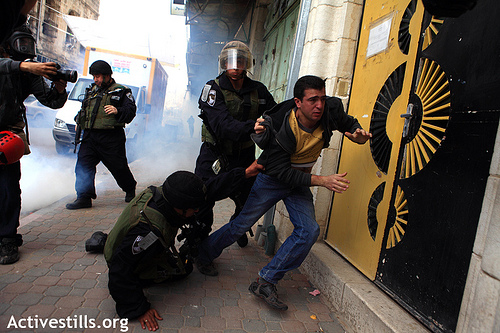 According to Open Shuhada Street, a South African based advocacy website,

Shuhada Street used to be the principal street for Palestinian residents, businesses and a very active market place in the Palestinian city of Hebron/ al Khaleel. Today, because Shuhada Street runs through the Jewish settlement of Hebron, the street is closed to Palestinian movement and looks like a virtual ghost street, which only Israelis and tourists are allowed to access. Hate graffiti has been sprayed across the closed Palestinian shops and Palestinians living on the street have to enter and exit their houses through their back doors or, even sometimes by climbing over neighbor’s roofs.We are focusing on Shuhada Street as a symbol of the settlement issue, the policy of separation in Hebron/al Khaleel and the entire West Bank, the lack of freedom of movement, and the Occupation at large.

Winding through the narrow ally ways of the ancient city of Hebron, one thousand demonstrators reached Shuhada street around 12h30 on Friday. A massive force of Israeli soldiers/border police were waiting for them and had formed an impenetrable line. Soldiers had stationed themselves on surrounding rooftops in order to have complete control and ability to repress the demonstration at any point. This is exactly what happen. 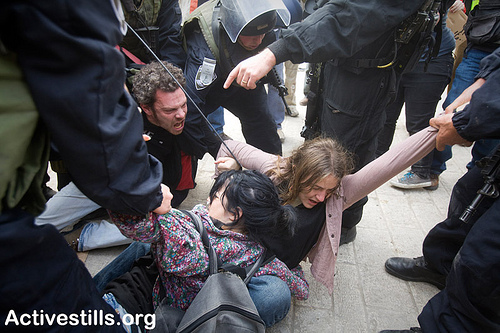 Soldiers began firing indiscriminately at protesters, using tear gas canisters as large bullets. A thousand people spread in every direction and chaos ensued. Palestinian youth began throwing rocks at the attacking soldiers. Due to the political climate in Hebron, a Palestinian Authority police force was deployed on the borderline between Palestinian H1 and Israeli H2 in order to stop Palestinians from joining the clashes. The scene was bizarre in its layout: the empty and deserted Shuhada street filled with Palestinian, International and Israeli demonstrators inspired by the tide of revolution spreading in the Arab world, caught between heavily armed Israeli border police guarding Jewish settlers on one side and armed (but not so heavily) Palestinian Authority police on the other trying to keep Palestinians from joining. 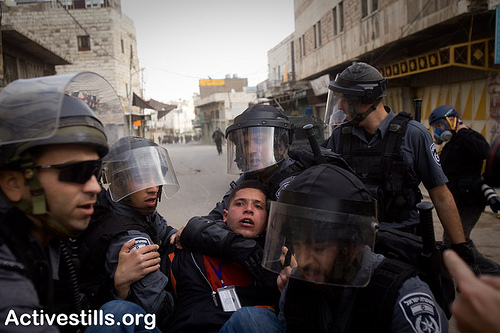 Clashes continued and intensfied. A number of Israeli demonstrators were detained by border police but released. Palestinians and Israelis were injured as the rampaging soldiers pushed closer to the PA controlled area of H1. More Israelis were detained and released. One reporter from Al Jazzera was arrested and charged with stone throwing. At the time of this writing, he remains in an Israeli jail. After two hours of cat and mouse clashes between Palestinian youth and Israeli soldiers, the demonstration was finished. The PA police, however, remained on the streets in order to ensure that another demonstration would not break out, this time against the PA itself. 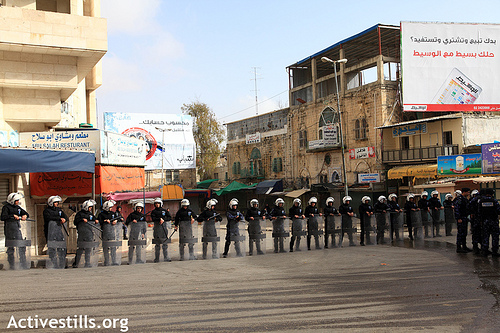 From the vantage point of nonviolent demonstration, last Friday’s demonstration was not as much a success as it was an indicator of what is to come in the West Bank. The nature of the demonstration reinforced the notion that Palestinians are ready for a new wave of popular civilian resistance to the Israeli Occupation and its agents (the Palestinian Authority?). Israeli peace activists, who have courageously struggled for the past eight years against the separation wall and Occupation in many Palestinian border villages, will soon have difficult and important questions to ask themselves. Namely, if a third intifada breaks out and there is mass unarmed resistance in Palestinian cities, will the village model of ‘joint struggle’ survive and translate to the urban context? Direct action for Israelis supporting Palestinian nonviolence has been confined, by and large, to villages for the past years. Some activists associated with the Sheikh Jarrah Solidarity movement have been forging relationships in the East Jerusalem neighborhood of Silwan, where the last six months have seen serious urban clashes. Members of Anarchists Against the Wall routinely visit demonstrations when they happen in Qalandiya and Hebron. Yet, there has been an absence of large scale resistance to Israeli Occupation emanating from the cities in the past years and the villages such as Bil’in and Nabi Saleh have been centers of violent clashes. 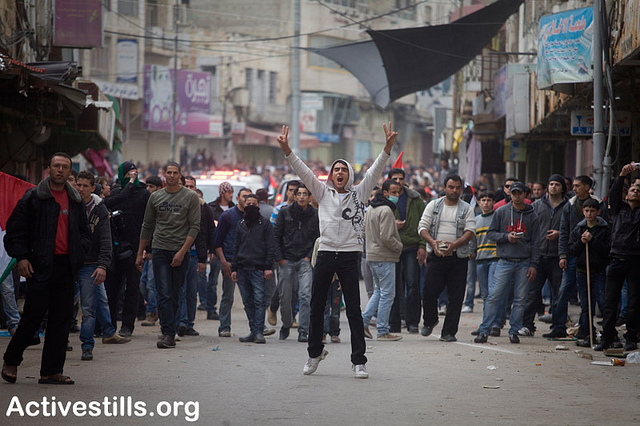 Many Palestinians believe that another Intifada is inevitable and almost all argue that it is going to be in the spirit and style of the First Intifada. This means that massive unarmed civilian resistance will sweep through the West Bank in a similar way that it has throughout the Arab world from Egypt to Libya. It remains to be seen weather there will be large scale Israeli support in these demonstrations to bring about the end to Occupation and resistance to Israeli domination.