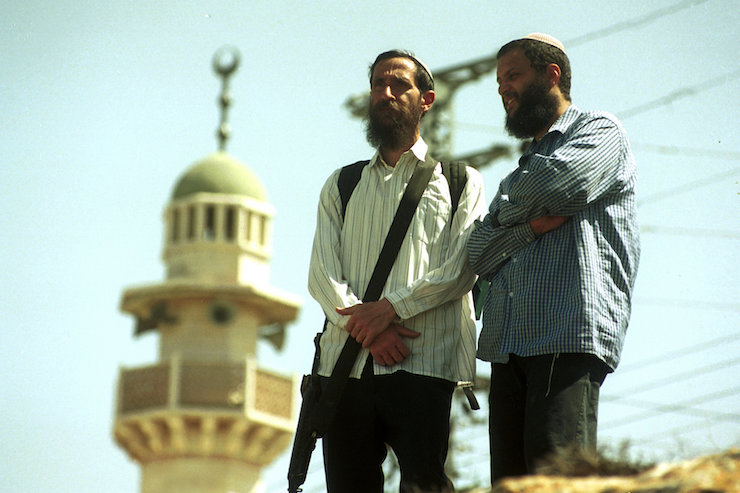 Israeli settlers stand near a mosque in the West Bank city of Hebron, April 1, 2001. (Nati Shohat/Flash90)

Following the Cave of the Patriarchs Massacre on Feb. 25, 1994, in which Israeli settler Baruch Goldstein murdered 30 Palestinian worshippers and wounded 120 others in Hebron, then Prime Minister Yitzhak Rabin found himself with several ways to respond. The West Bank was boiling over and the security establishment was predicting Palestinians would carry out reprisal attacks. Rabin had to act quickly.

Using provocations in order to elicit retaliation from the Palestinians has been a cornerstone in the settlers’ methods of expanding their control. This time — even according to his own wife — Goldstein’s goal was to drive a stake through the Oslo Accords with a massacre that would inevitably bring about a devastating response.

This wasn’t the first time: the Hadassah Convoy Massacre, in which Arab forces killed 77 Jewish doctors and nurses on April 13, 1948, came four days after Zionist paramilitary militias, Irgun and Lehi, committed the infamous massacre in the village of Deir Yassin. The settlers have internalized and improved upon the method.

Rabin’s government could have taken steps to instill calm and strengthen moderate Palestinian leadership during the 40 days of mourning that followed Goldstein’s rampage. Expelling the settlers of Hebron from the city would have proven that the Israeli government acts with determination and can prevent the large-scale reprisal actions that we have witnessed since April 1994, after 40 days of mourning. And there were good reasons to kick them out: ever since they entered the city in 1968, Hebron’s settlers have been a violent group that has caused severe damage in a city with a historically moderate political leadership.

Yet the plan to remove the settlers was shunned after Prof. Ehud Sprinzak, an expert on terrorism and one of Rabin’s aids, convinced his boss that their evacuation could lead to a civil war. In the meantime, 10 more Palestinians were killed and hundreds more were wounded by the Israeli army in demonstrations that erupted following the massacre in Hebron. Rabin would later wonder aloud before Dennis Ross, the U.S. envoy to the Middle East at the time, whether he had made a mistake by accepting Sprinzak’s recommendation.

Instead of removing the settlers from Hebron’s city center, (the 700 settlers currently living among 34,000 Palestinians in the city center are free to go where they wish; Palestinians are subjected to severe restrictions on movement by security forces) the army put the Palestinians under closure. Meanwhile, security forces were sent to the area to protect the settlers. The steps — which were taken following pressure by the Yesha Council, the umbrella organization of municipal councils of West Bank settlements, as well as threats by the settlers themselves — proved to the Palestinians that the Israeli government is not planning on acting against the murderer and his surroundings.

Hamas and Islamic Jihad immediately began carrying out reprisal attacks, condemning Palestinian leader Yasser Arafat and the PLO as those who would no longer protect the Palestinian people. After a short respite from the violence with the signing of the Oslo Accords, the Cave of the Patriarchs Massacre led to a number of successive, large-scale attacks that Israelis had not witnessed since the 1948 war. More than 160 Israelis were murdered in eight suicide bombings, all of them carried out by Hamas and Islamic Jihad, all of them inside Israel. The facts did not confuse the settlers, who called Rabin a “traitor” for “giving the Arabs guns.” Not a single gun and not a single PLO member were involved in those massacres of Israelis. But for the settlers, the goal of eliminating Rabin and Oslo justified the means. 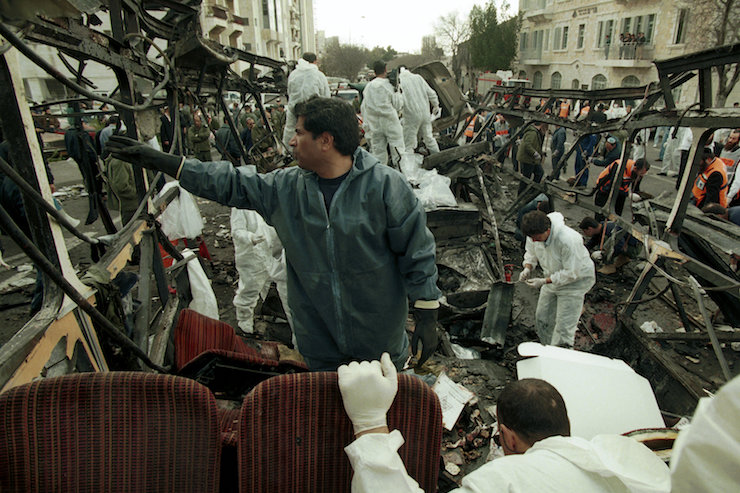 Paramedics and rescue workers at the site of a Hamas suicide bombing in Jerusalem, which killed 26 people and wounded 80 more, February 26, 1996. (Flash90)

There was another option for bringing about calm that Rabin and his advisors did not discuss: demolishing Baruch Goldstein’s home. Doing so could have deterred settler terrorists and bolstered disagreements in Palestinian society about the proper response to the massacre, thereby potentially avoiding the civil war Sprinzak warned against. What would Palestinians have stood to gain from reprisal attacks when the Israeli government was taking concrete action against the settlers?

The Israeli army is an expert when it comes to this type of collective punishment, knowing well how to carry it out — with a lot of noise, plumes of smoke that can be seen from a distance, and dramatic preparations that are recorded and distributed to media outlets around the world. Israel could have presented itself as a country that seeks to minimize conflagrations with the Palestinians, and as a state that does not differentiate when it comes to punishing Jewish and Palestinian murderers.

Israel routinely demolishes homes according to Regulation 119 of the British Mandate’s Defence (Emergency) Regulations, which allows the authorities to take over the homes of anyone who tries to harm the state through violence. Since 1967, hundreds of homes belonging to Palestinians who have been involved in violent activities against the occupation or Israeli citizens have been demolished in accordance with this regulation. Yet never has Israel demolished homes belonging to the many Jewish Israelis involved in violence against Palestinians.

We heard the legal justification for this back in 2015 from settler and Supreme Court Justice Noam Solberg, when he wrote that the “Jewish public does not need the same deterrence, which is the purpose of home demolitions. The Jewish public, in general, is deterred and not incited.”

Perhaps news of the incitement against human rights activists and journalists over the past few years has yet to reach Alon Shvut, the settlement Solberg lives in. Perhaps he has not read about the incitement against members of Peace Now during the days of the First Lebanon War, the murder of Peace Now activist Emil Grunzweig by right-wing settler Yonah Avrushmi. Solberg, it seems, did not witness the incitement by thousands of settlers against Rabin in the months leading up to the assassination. 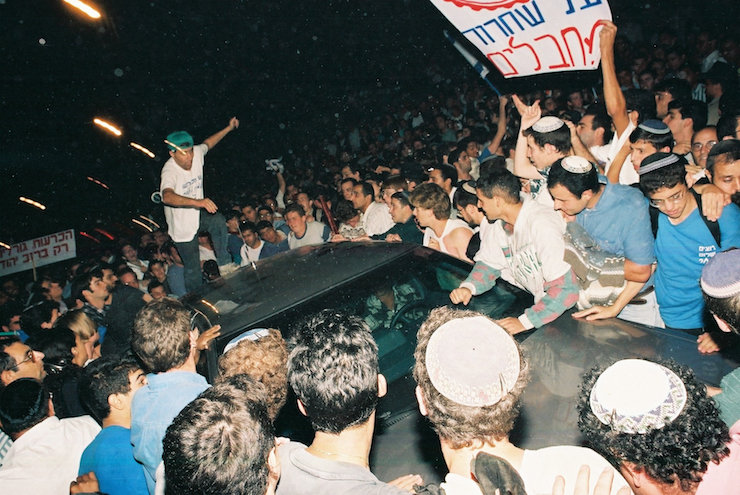 The claims made by the security establishment about demolishing homes have been no less absurd, since no one has ever proven that Palestinians are actually deterred by the demolitions. Hundreds of Palestinian homes have been destroyed, yet the violent struggle for freedom has continued for over 50 years. Could it be, then, that home demolitions actually encourage terrorism?

Are Jews less deterred than Palestinians? Does the moral damage caused by collective punishment differentiate between Jews and Arabs? In a petition to the Supreme Court filed by the family of Muhammad Abu Khdeir, who was kidnapped and burned alive by Jewish settlers in July 2014, to demolish the homes of their son’s killers, Justice Elyakim Rubinstein ruled that “the demolition or sealing of a Jewish terrorist’s home, which would save lives, even that of one person, justifies the use of the regulation.” But how does one prove that the demolition of a home could save lives?

What would have happened had the Israeli government demolished the homes of the 29 terrorists from the Jewish Underground — who planned and carried out numerous attacks on Palestinian civilians, and plotted to blow up the Dome of the Rock — after they were arrested in April 1984? Would that have put an end to all Jewish terrorist activities? Could the Cave of the Patriarchs Massacre have been prevented had Goldstein known that his home was in danger? And had Rabin decided to demolish Goldstein’s home immediately after the massacre, would Yigal and Hagai Amir have considered the fate of their family’s home before going ahead with their assassination?

Prof. Amiram Goldblum served as the spokesperson for Peace Now during the assassination of Yitzhak Rabin.