After Israel boots the only internationally mandated human rights observer group in Hebron, Palestinian volunteers step up to monitor settler attacks amid a sense of heightened hostility. 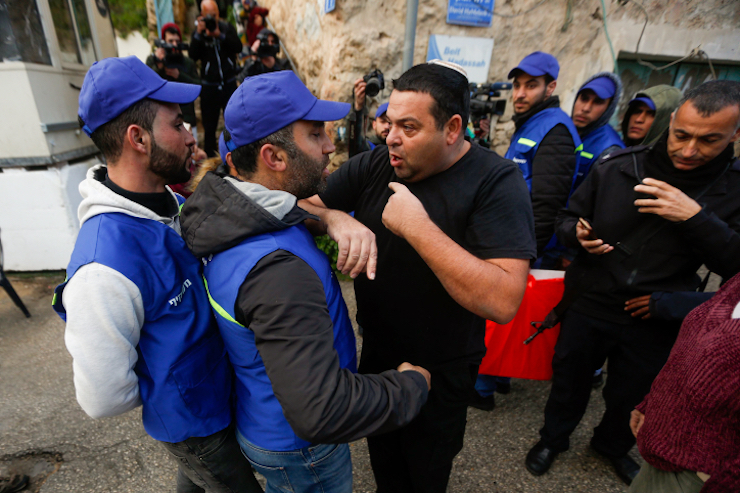 About a dozen Palestinian volunteers in blue vests identifying themselves as “human rights observers” made their way toward the Israeli army’s Checkpoint 56 on Shuhada Street in the occupied West Bank city of Hebron early last week. They were escorting children on their way to the Qurtuba school 100 meters away, enduring harassment and kicking by settlers as they let the schoolchildren pass.

Up until late last month, this was a task for international observers, but on January 28, Israeli Prime Minister Benjamin Netanyahu announced that he will not renew the mandate for the Temporary International Presence in Hebron (TIPH), accusing the mission of “acting against Israel” in a tweet.

“When they kicked TIPH out, it was like they kicked us in the face,” said Palestinian activist Izzat Karaki.

The Oslo II Accord of 1995 called for an international presence in Hebron following the 1994 Ibrahimi Mosque massacre, in which a Jewish settler killed 29 Palestinian worshipers in the city. TIPH mission was tasked with monitoring the human rights situation in the city, which Oslo divided into two areas: H1, home to most of the city’s Palestinian residents, is governed by the Palestinian Authority; and H2, where hundreds of Israeli settlers live among tens of thousands of Palestinians, and which is under the control of the Israeli army.

TIPH was the only observer group in Hebron with an official international mandate renewed every few months by Israel and the PA. Its staff included observers from Norway, Sweden, Switzerland, Turkey and Italy. The organization, which was also the best-funded and well-staffed in the city, produced over 40,000 monitoring reports in 22 years, among other humanitarian duties. Right-wing pressure against TIPH increased in Israel after two incidents by observers in which one slashed a settler’s tires and another slapped a child’s face. Both were removed by TIPH.

With TIPH’s exit, other volunteer international observation groups are now concerned about their safety in Hebron. According to Peter Prove, director of the Commission of the Churches on International Affairs at the World Council of Churches (WCC), “the same day as the announcement, there was a noticeable spike in harassment and threats from members of the settler community” against observers from the WCC Ecumenical Accompaniment Programme in Palestine and Israel (EAPPI). Within days, the WCC decided to pull out their international observers from the IDF-controlled H2 area of Hebron, severely curtailing their ability to carry out their intended monitoring.

Prove called EAPPI’s return to H2 “imminent,” saying they will reintroduce their observers “step-by-step” after they implement measures to increase their observers’ safety. 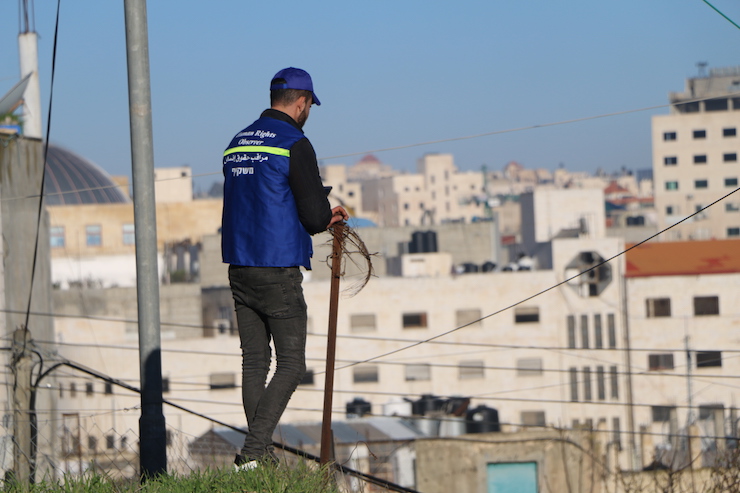 About a dozen Palestinian volunteers escorted children to the Qurtuba school in Hebron after Israeli Prime Minister Netanyahu decided not to renew TIPH’s mandate in Hebron on Jan. 28, 2019. (Catherine Curran-Groome)

In the interim, a group of Palestinian volunteers is trying to fill the monitoring gap left behind by the recent departures of the two international observer organizations. The new group, Kifah, or “struggle,” is named after Kifah Owewi, a Hebron activist who passed away recently, and was the brainchild of Tel Rumeida community leader Issa Amro. Kifah is reviewing volunteer applications and training Palestinians on how to properly handle settler provocations.

But as Palestinians under military law — and without the official international mandate of TIPH — Kifah volunteers have little power to monitor human rights abuses. On their third day at Checkpoint 56, for example, soldiers demanded the Palestinian group leave, declaring the area a closed military zone for 24 hours. The order was seemingly enforced only that morning in order to remove the Palestinian observers, with the army allowing normal movement on Shuhada Street to resume a few hours later.

The next morning, soldiers waited outside the Youth Against Settlements house in Tel Rumeida, where Kifah volunteers had gathered before leaving to monitor the checkpoint. They prevented the Palestinian group from leaving the house by declaring the area a closed military zone. The soldiers again stopped the Palestinian volunteers when they tried to reach the school from another direction.

Because TIPH was part of an internationally mandated force, Israeli soldiers generally did not force them out of such closed military zones. “Now, we are weaker,” said Issa Amro. “We can’t replace TIPH, an international mission. We can’t do what they could.”

With the military declaring closed military zones around Qurtuba school each day, Amro said they plan to monitor other schools in the morning instead. On Thursday, they were joined by other Palestinian committees to monitor three separate locations in H2. They will continue to patrol the area at night and offer a hotline for locals whenever there are any settler attacks.

In other areas, TIPH helped fund community projects around Tel Rumeida, including a kindergarten, a garden, a playground, and a health clinic, according to Bassem Abu Aisha, president of the Popular Committee of Tel Rumeida. The organization also supported education classes for adults, organized communal feasts on Ramadan, and took children on field trips, he said. Now that TIPH is gone, “we have no money for projects in our community. These problems will worsen in the coming months,” said Abu Aisha.

The few remaining non-official international observers in Hebron described a “frightening” atmosphere in the city following TIPH’s departure. All volunteers interviewed asked that their names and the organizations they are with not be published.

Earlier this month, the IDF detained two activists from the International Solidarity Movement (ISM) and banned them from H2 for two weeks. Others have been forced to leave checkpoint locations this week.

Amid the hostile environment, remaining observers are going “underground and incognito,” said one international volunteer, adding that many are afraid to identify themselves. Observers from organizations like Christian Peacemaker Teams (CPT) no longer wear their vests identifying them or their organization, fearing reprisal or banishment.

With many incoming volunteer observers being denied entry at the Israeli border, resources were already being stretched thin for monitor groups before TIPH and EAPPI left. “Our focus has been shifted to covering as many checkpoints as we can,” said John. “Previously, our teams were bigger, so people can do home visits, write reports, but with the denials at the border spreading every organization thin, those things aren’t happening.”

To compensate for the losses and heightened hostility, remaining observer organizations are in constant communication with each other, calling to exchange information and cover for each other at checkpoints.

When harassing Amro and other Kifah observers, the settlers’ taunts at times seem celebratory. Minutes after he was forced to leave Checkpoint 56 near Qurtuba school, Amro told media “settlers attack the school from time to time.”

“A lot of times! A lot of times!” interrupted Israeli settler Ofer Ohana, who had been taunting and taping Amro and the Kifah volunteers the previous 30 minutes in an effort to provoke them. Ohana is a well-known Israeli settler from nearby Kiryat Arba who was infamously videotaped kicking a knife toward the body of the incapacitated Palestinian man executed by Israeli soldier Elor Azaria in March 2016.

During a recent settler attack, in which several threw stones at Palestinian homes in Tel Rumeida, Amro said settlers told him and others, “TIPH is not here anymore. We can do whatever we want with you.”

Some families are taking time off from work to bring their children to school, fearing settler violence now that there aren’t international observers at checkpoints. Abdullah Gharib’s children go to Qurtuba, and he said he is considering pulling them out of the school altogether. “We are scared for our children and women and properties,” said Gharib. “We don’t have any resources to defend ourselves.”

For now, Gharib and other families are “standing together” and tightening communication with one another. But there isn’t much they can do, said his wife, Haiam. “Any attack the settlers wanted to do, when TIPH was there, the settlers couldn’t do it so freely,” said Haiam. “We will suffer much more over time. The coming days will be bad for us,” she added.

Hours later that night, a group of Israeli settlers threw stones at the windows of several Palestinian homes around the corner from the Gharib house and at passersby. Palestinians describe increasing settler incidents in the days since.

Haiam recalled how in September 2018, a settler ran over their 16 year-old son, Montaser, outside their neighbor’s house in Tel Rumeida, moderately wounding him. Afterwards, TIPH directed them to lawyers and helped monitor their case in court. “Who will care for us now? We are just swinging in the air. We don’t know where to go,” said Haiam.

“We used to feel more secure when [TIPH] was here,” she added. “Now, there’s no security. It’s gone.”

Steven Davidson is a freelance journalist based in the Middle East. His work has appeared in the Forward, the Times of Israel, Haaretz, Salon, and +972 Magazine, among others. You can find him on Twitter @sdavidson169.